Stars in the Darkness 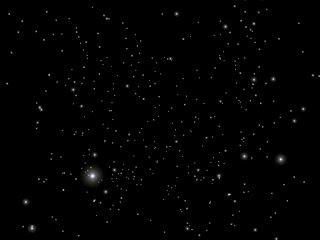 Yesterday was Stake Womens' Day, and one quote from the keynote speaker was:
"Only in the darkness can we begin to see the stars."
I have always loved the stars. One of my favorite things to do while I was growing up was to lay outside on the trampoline at dusk and watch as the stars came out. When I first began this hobby, I was frustrated with a street lamp on the corner by our house, as it muted out all of the weakest stars. But as the nights wore on, I oriented myself so that the street lamp's light wasn't shining directly in my eyes, and I tried to focus on the beauty of the stars that I could see. In this position, my mind combed over hundreds of thoughts, experiences and ideas. Hundreds of scenarios; hundreds of conversations; hundreds of hymns. It was, to me, the ultimate definition of the verb: to ponder.

When Brian and I were dating, we would often lay on our backs to look up at the stars. Again, hundreds of conversations were had...and it was in this position one night (Brian told me later), when he started to fall in love with me. (Kind of strange that the conversation we were having that night was centered around 'muggles' from Harry Potter - - - very romantic.) For my 20th birthday, he gave me a book full of constellations, and we spent many nights searching for random pictures in the sky.

Yes. The stars are important to me.

So this quote struck a chord with me. I began to think about the dark moments in my life and the 'stars' that I was able to see because of that darkness. The brightest star of all is the star that represents God's love for me. I equate that in my life to the light of the moon; always visible at night, and even sometimes in the middle of the day. I hope someday the strength of God's love will be like the sun in my life - always there and visible until, as the Earth does each night, I turn my back on it's warmth. But, for now, the moon is enough. There are many other stars that have appeared from the darkness in my life; stars that are harder to remember because they're not always visible. Just as the street lamp muted out the weaker stars in my hometown sky, the fast pace of everyday life mutes out the weaker stars in my sky.

But, even though the stars and the moon are not always visible to me, I know that they are there - waiting for the light to fade just enough for them to show their brilliance.

And, even though my stars and my moon are not always visible to me, I know that they are there - waiting for the Lord to fade the light in my life just enough for them to show their brilliance.
~
posted at 3:37 PM