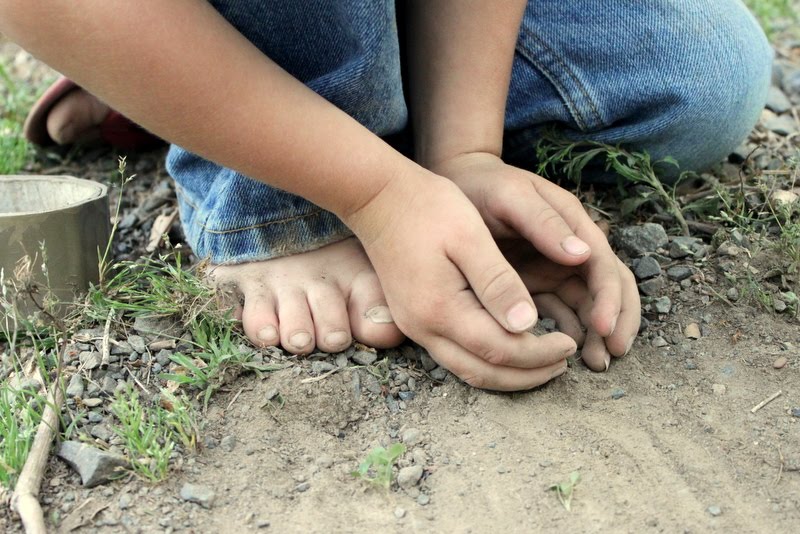 Picture taken by McKenzie - pretty good, huh?!
Well, the sweat rings don't lie...spring is turning into summer, folks. The temperatures are getting just high enough to remind us of just how uncomfortable these hot, humid summers of North Carolina are. (A note to my family, I'm totally joking...the summers aren't so bad - you should move out here...) (A note to the rest of you, I'm totally not joking - the summers are terrible.)

Here's a bit of what we've been up to this spring: 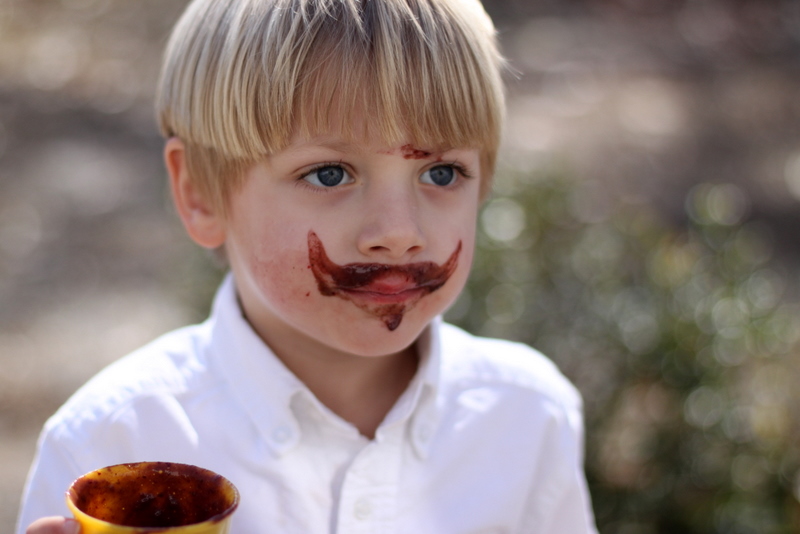 What?! Spinach in a smoothie?! And not just a little bit either, but a whole handful for your glass. When I first heard about it, the thought was enough to stimulate my gag reflex. But after a good friend guaranteed that you could not, in fact, taste the spinach AT ALL, I decided to give it a try. As I watched the gloppy green mixture splat around in the blender, I'll admit that my hopes were not high - but after adding the colorful berries, it started to look like something I might actually enjoy. I'll let the picture above sum up the results. :) 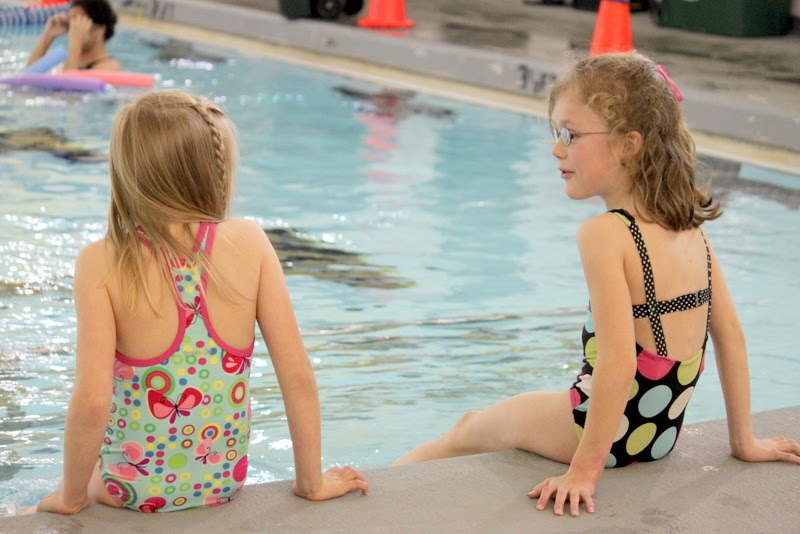 McKenzie and her friend, Carolyn
This year, I decided it was time to have my children learn the ways of the water. Perhaps overdue, since we spend so much of our summers in the pools. (A note to my family - wouldn't you love to live in a place where you could swim for so many months out of the year? So refreshing!) (A note to the rest of you - sometimes the pools are so warm they feel more like bathtubs. Not refreshing.) 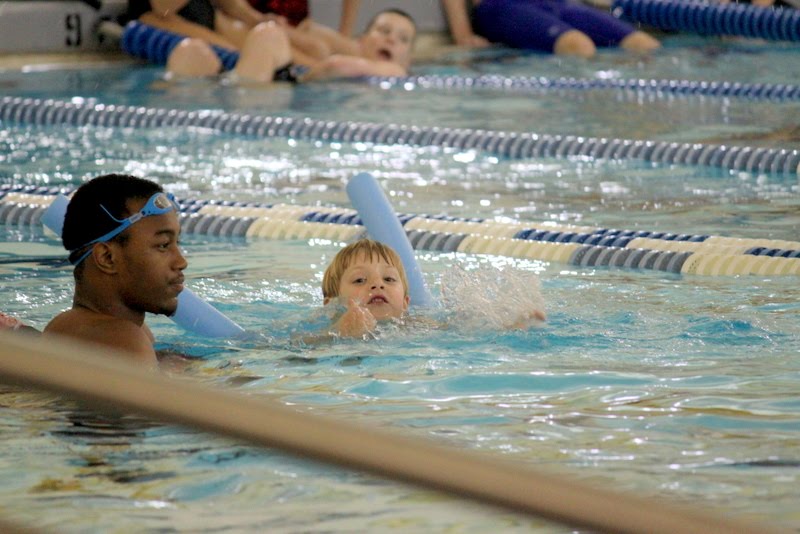 Carson spent most of his time glancing over to the bleachers to see if he could catch my eye. Once caught, you could count on a thumbs-up from him. This was his most improved area - - - he got awesome at keeping afloat with one hand out of the water. 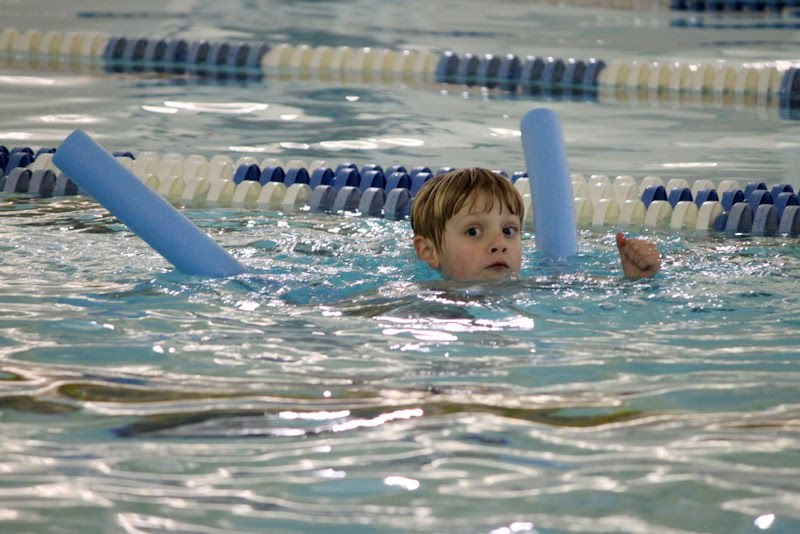 McKenzie picked it up fast and is now able to get herself across the entire pool with no floaties. 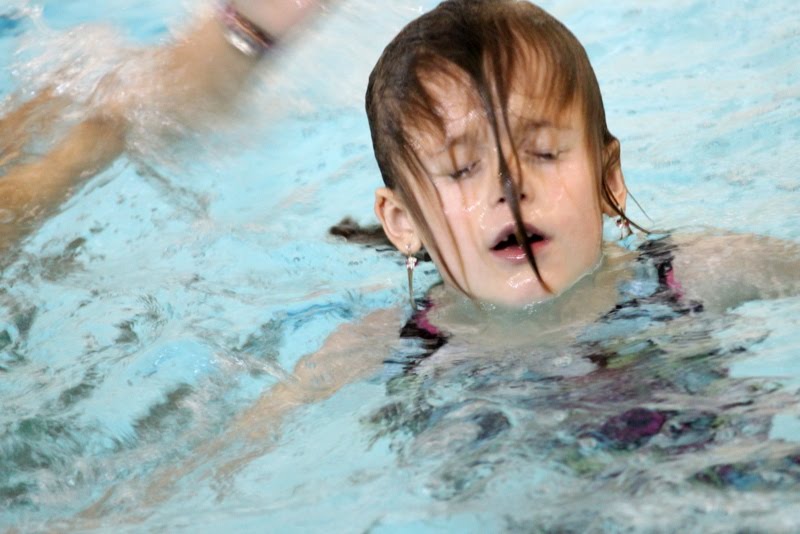 No drowning for us! 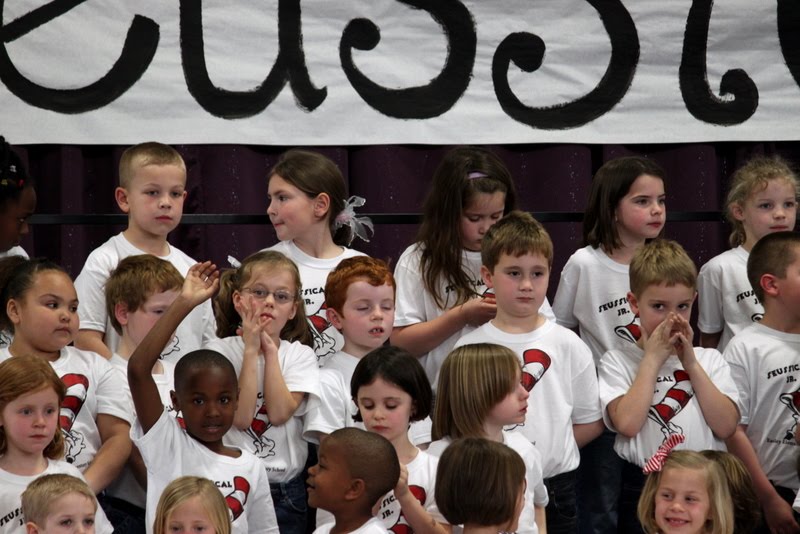 McKenzie's 1st grade musical... and this picture cracks me up. One boy sneezing, one boy picking his nose, a girl in back admiring her fingernails, and a boy looks to be waving right at my camera (funny because I was standing at the very back of the auditorium using my zoom lens). The show was cute, the kids were cuter. :)

While we're here, meet Jack. He's the kid that belongs to that pair of eyes down in the bottom left corner of the picture. Cute, cute kid...and McKenzie's new boyfriend. They are, apparently, in love. Definition of 'in love' from McKenzie: I chase him around the playground every day.

Brian got a basketball hoop for his birthday this year. The directions said that assembly would take a couple of hours, so Carson and I decided to set it up while Brian was at work so that when he got home he could spend his evening actually playing with it rather than setting it up. McKenzie hopped off the school bus just in time to hang the net. 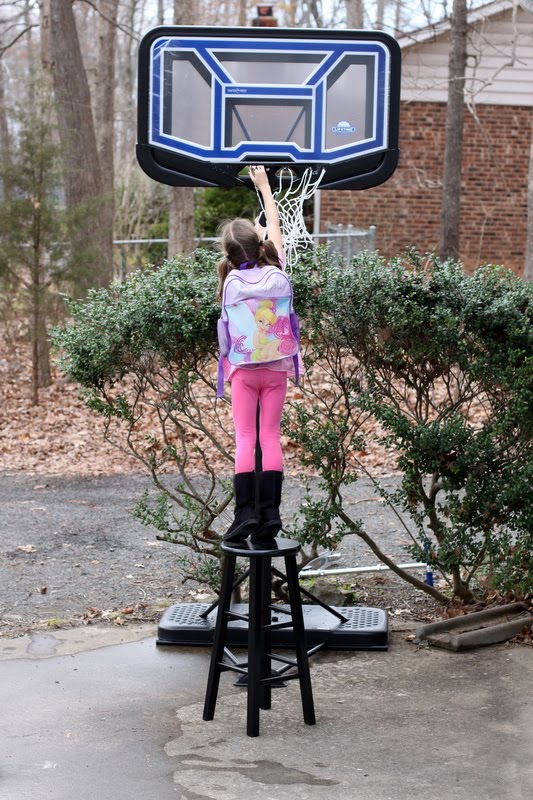 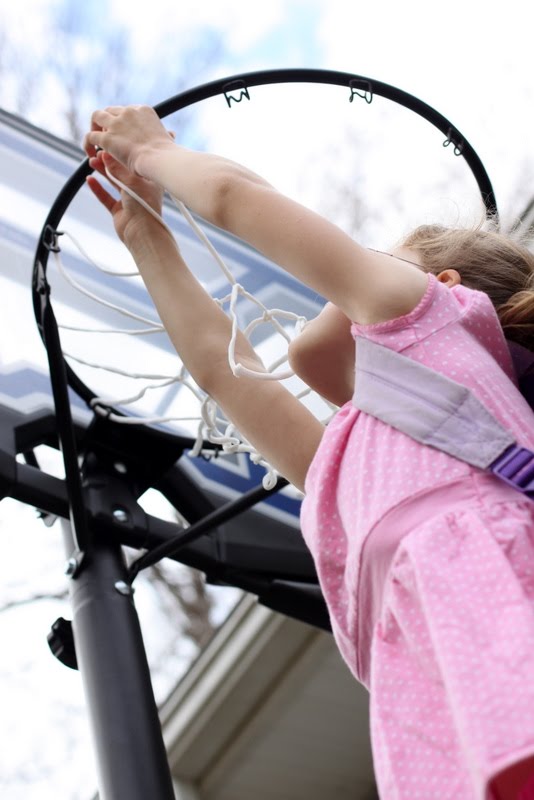 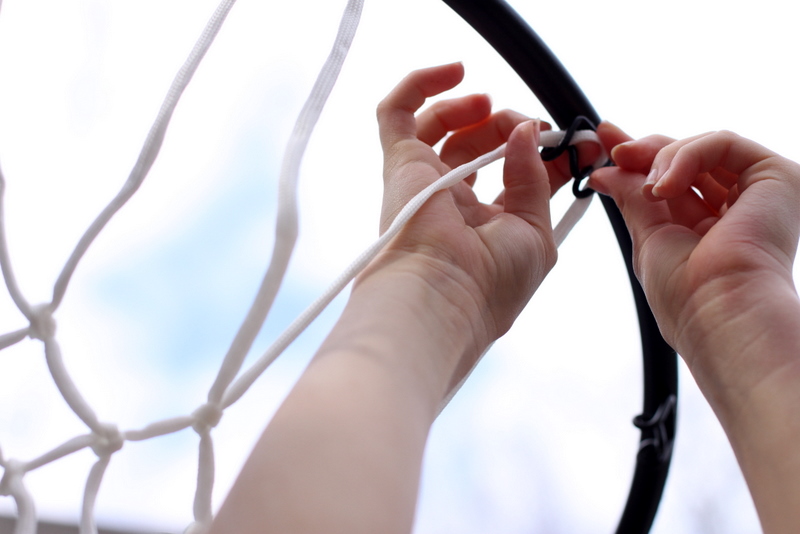 Now, for a girl, I'd say I'm slightly above averagely savvy when it comes to assembling and building stuff, but there were a couple of times that I worried about death as the top-heavy monster of metal and plastic threatened to crush us. And I feel it is appropriate to brag here, just a little. :) We persevered for hours - and Carson and I felt victorious when, dripping with sweat, we finally shot our first baskets. 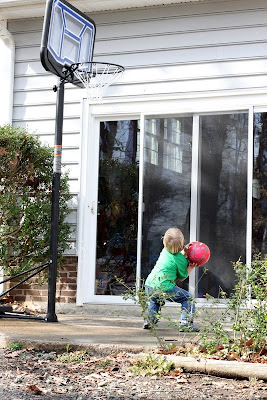 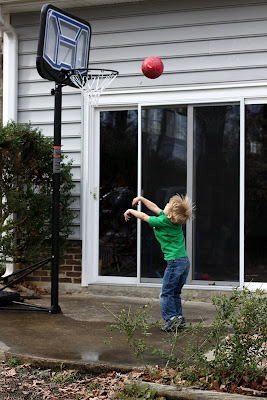 Halfway through the assembly, Carson said, "Mom, dis is taking way too long. I didn't know it would be dis long when I said I would help you." He was a trooper - and there would have been no assembled hoop without him! 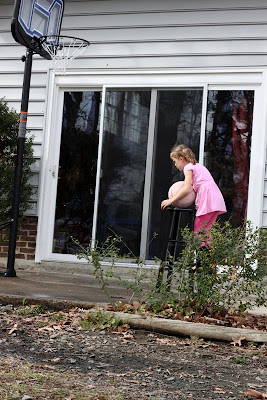 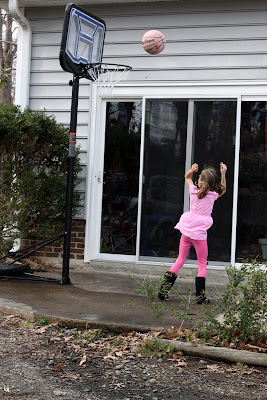 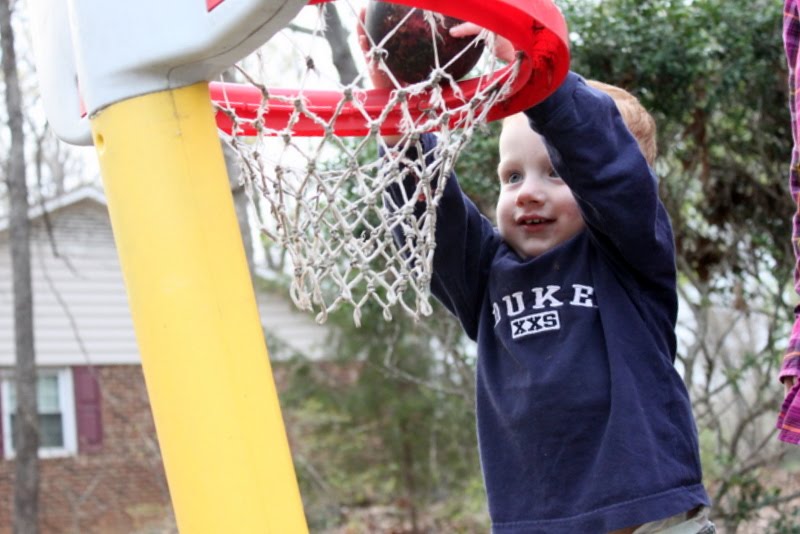 You know what the best thing about these kids is? How well they get along with each other. McKenzie and Carson play together so well, and when they turn their attention to Miles, he feels like the star of the universe. Just look at these faces in response to Miles making a basket! You are loved, little boy! 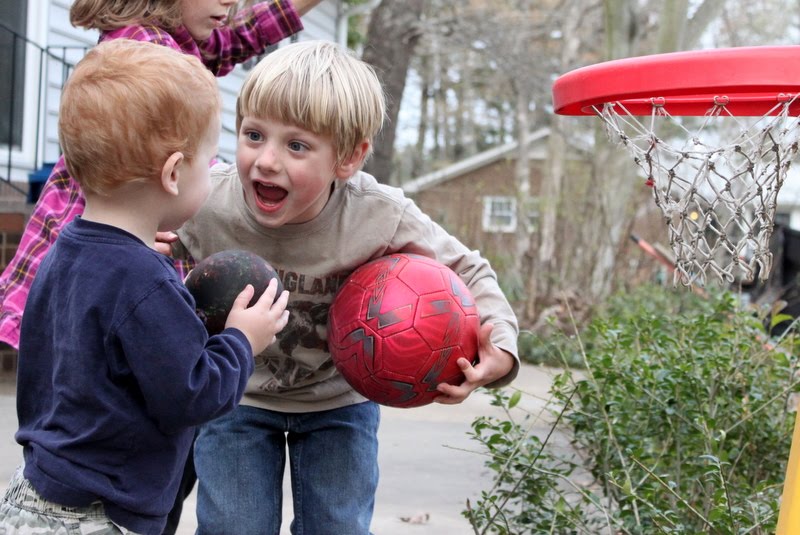 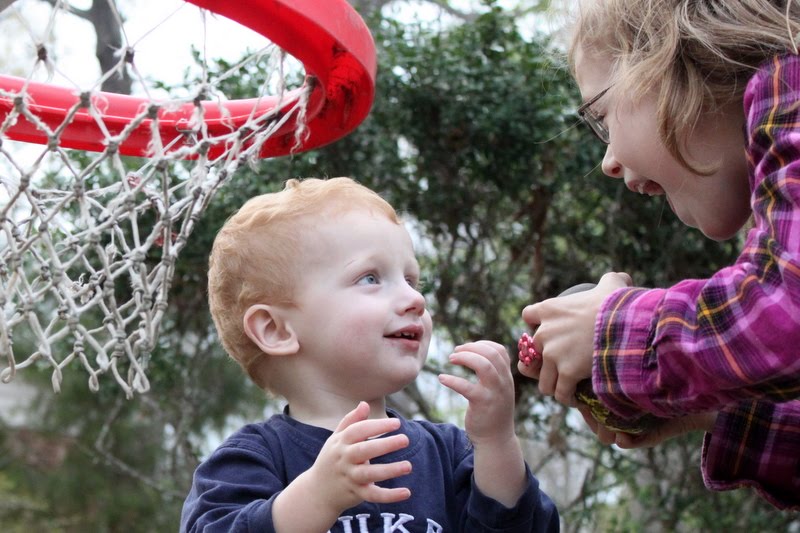 It's always a sad goodbye when we wave off the best weeks of spring. But you can be sure we'll keep enjoying it before the temperatures force us to stay in the house or in the water! (A note to my family - I love living in a place where I don't have to do my hair for the entire summer!) (A note to everyone else - I do not love having wet hair for an entire season. At least I can choose whether it's wet with pool water or sweat...)
posted at 11:17 AM 8 comments:

"Brian?" I whispered into the quiet darkness. We had already said goodnight and the stillness from his side suggested that his mind had already started to drift into sleep. But my mind was not quite settled.
"Hmmm?" His tone was gentle.
"I'm glad you didn't die today."
"Me too," he said after a slight pause. "I'm home, safe and sound. And we had good burgers tonight."
A small laugh escaped through the lump in my throat and I closed my eyes to fight off the stinging tears. It worked pretty well...only one of them escaped and landed on my pillow. 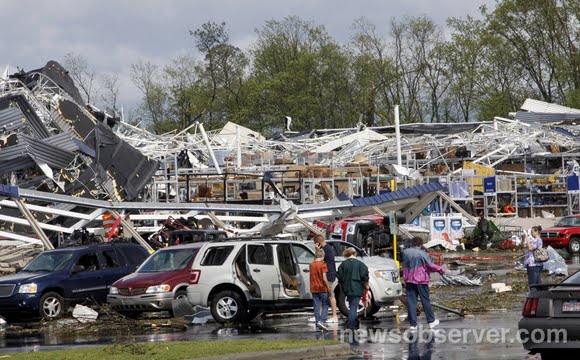 Tornadoes swept through Raleigh yesterday. There are three confirmed deaths so far (just in Raleigh), and many damaged houses and buildings...including the leveling of a Lowes home improvement store just outside the city.

Brian and Carson were 5 meager miles away, stopped in the minivan watching a 2 foot deep river rush down the road they intended to cross. Several compact cars had tried to cross and were sitting in the middle of the river, stuck. "Linds! I've never seen anything like this!" Brian said over the phone, "This is crazy!" Carson called a few minutes later. "Mom, dere was dis guy, and he was stuck in his car, and a big twuck came up, and the man got out of his twuck with a rope, and den the man in his car got out of his car and he was only wearing his socks! Den the twuck pulled and pulled and got all the cars out of the water!"

Clearly they were having a good time.

Meanwhile, I was sitting home watching the news and listening to the announcers say, "You need to seek shelter!" "Do not go into downtown Raleigh right now! If you are listening to us on the radio and are headed for downtown Raleigh, pull off the side of the road immediately! Do not go into downtown Raleigh! We are seeing very dangerous signs that a deadly tornado is forming!" "We cannot stress enough how dangerous we feel this situation is!" The predicted path had the storm passing through downtown Raleigh and then continuing northeast. Brian and Carson were in northwest Raleigh - out of the predicted path by a few miles. This calmed Brian's fears and gave him encouragement that he could finish his errands. But it didn't calm my fears - - - they were still much too close to it for my comfort and I kept asking him to turn around and come home. Thankfully, the storm followed the predicted path, causing the casualties 5 miles east of my life.

I'm trying not to entertain the what-ifs. But my heart went through an emotional roller-coaster yesterday and I realized, once again, how much I love and how tightly I am bound to that man. 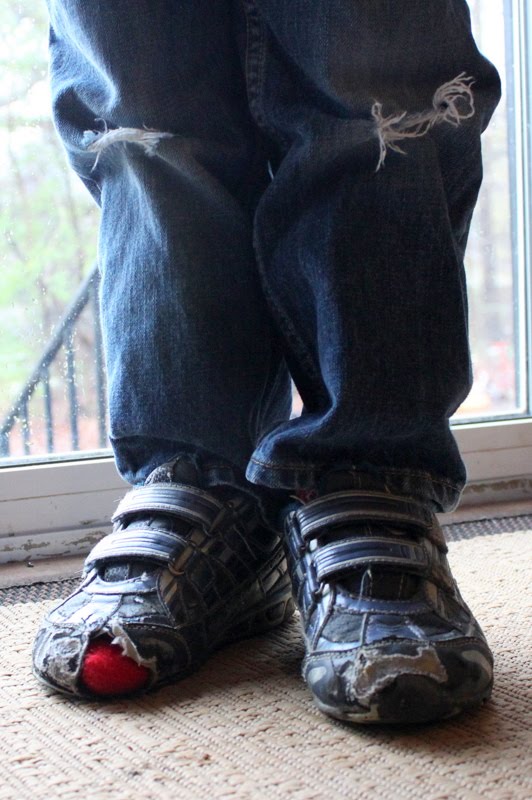 I sent my 4-year-old son to preschool like this on Wednesday. In the pouring rain. I felt a twinge of guilt as I watched him dance around (but mostly through) the puddles on his way to the car-pool van. The poor boy was trying to walk on only the outside of his foot to keep his big toe from getting drenched. I'm pretty sure he wasn't successful.

Three hours later I sat in the carpool line waiting for him to come bouncing out the door with the rest of his class. My windshield wipers worked constantly to keep my vision clear and I saw a little boy walk out of the building, hand in hand with his mother. He skipped and jumped through the puddles and I watched the water splash up and around his bright green rubber rain boots. His mother pulled him along, most likely anxious for the shelter of her car, but the rain didn't bother the boy a bit...he was already sheltered in a bright green rain coat with the hood cinched up around his face.

And I couldn't help but think, Oh dear. Perhaps my son should have rain boots with a matching rain coat. But of course, I was just feeling guilty that I had sent my son to school with holes in his shoes. And his pants. He's just so dang hard on his clothes! Out of the six pairs of pants I bought for him this season, five of them have holes in both knees.

He and I went on a date last night to get a new pair of shoes and a milkshake, but he'll have to live with the torn up pants for the rest of the season. Is this a boy thing? I'm guessing Miles won't have many hand-me-downs from here on out...
posted at 5:15 PM 8 comments: