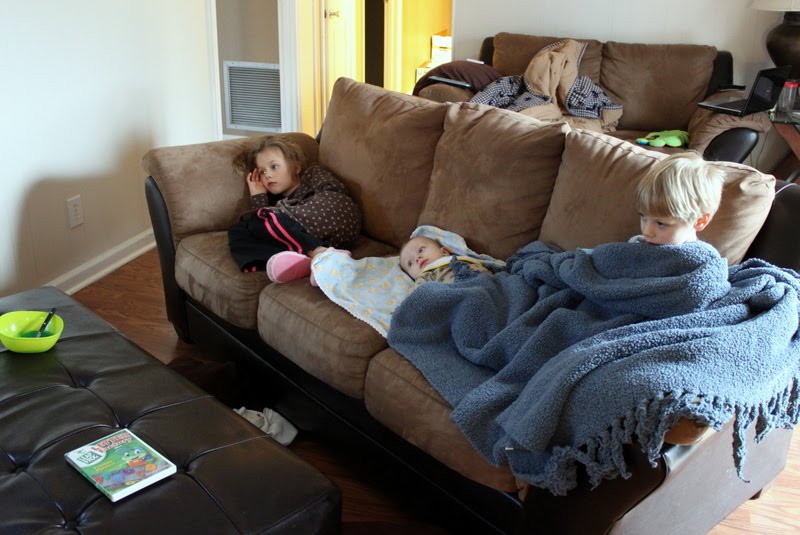 You can see my 3 sick kids on the front couch, my little sick-hub on the back couch, and Brian had just sent a message from work saying that he was sick, too. Poor guy had to power through it at work while the rest of us watched movies all day. We didn't have enough throw-up buckets for all of us (and I'm totally opposed to letting the kids throw up in a bowl that I actually use for cooking - my brain can't get around the mental image of vomit-slop in the bowl I'm tossing a salad in), but thankfully some of us could make it to the toilet in time...and we were mostly in different stages of agony anyway, so we didn't all need it at once.

I'm so sorry. I didn't mean what I said the other day. I won't deny the truth - when I flew out the door on Sunday and mentioned to Brian on my way that I was taking 'his car', I was referring to you...but I didn't mean it. Do you remember all the times I've called you 'my little green Civic'? That's how I truly feel.

I know I've been spending most of my time with the van. That must make you feel terrible - please know that I miss you too. I guess we both knew this time would come, but that doesn't make it any easier.

I remember one of the very first rides we took together...we packed all of my belongings into your brand new backseat, and you took me safely to my college dorm. Remember how scared and excited I was?! Remember how sad I was when my parents left? But you always sat right there in the parking lot for me...reliable and ready to take me home through the canyon whenever I needed. Do you think we could even count the number of times we packed you to the brim with friends and all our laundry?! And then all the road trips...St. George, Vegas, California... we had some good times that freshman year.

Oh, remember the accident? The car behind you on the freeway didn't even see that you were stopped in traffic, and he slammed right into you. After the officer left, I picked your back bumper up off the road and slid it gently into your backseat. Even though you were hurt, you still continued taking me home from California to Utah. You sure were a trooper that day.

Remember when we first met Brian? My favorite memory of you and Brian was early, early on when the three of us went to Arby's together late at night. We didn't know him very well - but you knew I liked him...and I was pretty sure I liked him, too. After ordering our food, we claimed a spot in the parking lot to eat. I turned your engine off so you wouldn't get too tired, but I appreciated the music you played while Brian and I talked. And talked. And talked. And talked. Two hours after our food was gone, we decided it was time to head back to the apartments - but you sly little devil! You pretended your battery was dead! I know, you blame me for leaving your lights and radio on for two solid hours...but we both know you could have found enough juice to start up. I know that because after we turned your lights and radio off for 30 minutes, you started up just fine...no extra help at all! You just knew our conversation was going wonderfully, and you didn't want it to end any more than I did.

You were so careful and smooth when you came to pick my brand new baby girl up from the hospital for the very first time. Wasn't she so beautiful and perfect? We tucked her snugly in the middle of your backseat and drove away. You took us on many drives with her after that day (almost every night, right!?) as we tried to drive her to sleep. That was back in the day when I could fill your tank with a $10 bill.

You've taken us across the country, seen our family grow, heard about our struggles and triumphs, never needing more than an oil change, a tune up, or a new tire (except the new bumper, once!), always reliable, always comfortable, always a beautiful, deep, sparkly green.

I still feel the same about you now as I have all these years - it's just that my needs have changed, and you just weren't built to be able to handle three carseats comfortably. I am happy with the van - I know that's important to you - but, the van will never take your spot in my heart. You're my little car, and each time I slide into your comfortable fabric drivers seat, I feel the warm fuzzies of familiarity and love.

Thank you for all the wonderful times we have had together so far.

PS - I'm sorry I turned your lights off when I was actually going for your wipers on Sunday.
posted at 5:06 AM 3 comments:

"You love to eat dirt!" I tease Carson as we try to decide what to have for a mid-morning snack.
"NO!!! I DON'T like to eat duht!" he insists.
"Yummmm, yummmmm, yummmmmy! I'll go get a bunch of dirt right now for your snack!"
"NOOOOOO!" He's still smiling, but also a little concerned that this may not be a joke.

I pull down the chocolate powder to make him a cocoa-baba (chocolate milk) and say, "Here's the dirt! Hand me your cup, please, and I'll fill it up with spoonfuls of this yummy, yummy dirt."

His look is priceless...a mixture of relief and excitement.
"Dat's not duht!"
"It's not?"
"NO!!! I eat duht from under mine fingernails, though."

One of the best pieces of advice I got in anticipation of my third baby was, "You just have to learn how to let things go."

I have papers on my microwave that have built their own little community and have no intent on ever leaving.

There's a 2X1 foot square in the corner of my dining room that the vacuum can't reach unless I change outlets in the middle of my vacuuming...I don't think that square has been vacuumed for 7 months now. And I've all but forgotten the hose attachment...I think all the tiny scraps of paper and little dirt clumps have figured out that their safe place is anywhere they can hug a wall. The same piece of paper you noticed last time you came over will be there next time...and the next...and the next.

There's a layer of dust collecting on my mantle that is getting so high I can see it from a sitting position on my couch.

We have pancakes or quesidillas for dinner at least one night a week, and leftovers for another two.

My plants get watered when they're sagging so low their leaves brush the ground.

I can actually see the crumbs underneath the stove, and dust bunnies keep flying out from under the couches and entertainment stand.

And...my kids eat dirt out from underneath their fingernails.

Yesterday, we had company coming in to stay the night. An old BYU friend interviewing for residencies around the country. I washed the sheets on the guest bed for him, and scrubbed the toothpaste remnants out of the bathroom sink. I picked up the bits of scattered toilet paper, put the extra stepping stools in the closet, and wiped the yellow spots off of the toilet (boys!). Just as I was turning my back on a job done well enough, I glanced at the white towels I have hanging on the towel rack. I quickly did a double-take and remembered what I had seen a few days before: a yellowish-green, crusty snot smear spanning 5 inches across the middle of the bright white towel.

It was in this moment that I reached a new level of 'letting it go'. Generally, I would whip that towel into the washing machine before you could count to ten...but I didn't have time for that, and I didn't really have the energy for that either. So, I picked the towel up, turned it around, and slipped it back over the towel rack.

Out of sight, out of mind.

I only hope our guest didn't wipe his hands on that towel - he most certainly would have found the hidden crustiness.

I've learned that life kind of prioritized itself. The things that REALLY bug me are getting done...the beds are made every day, and the rooms are tidy. There are usually no shoes in the middle of my floor, and the TV is usually closed behind the entertainment center doors. Our clothes make it into the laundry hamper and there are no toys on my kitchen floor (crumbs and sometimes giant pieces of food, yes...but no toys).

With these adorable cheeks in my life... 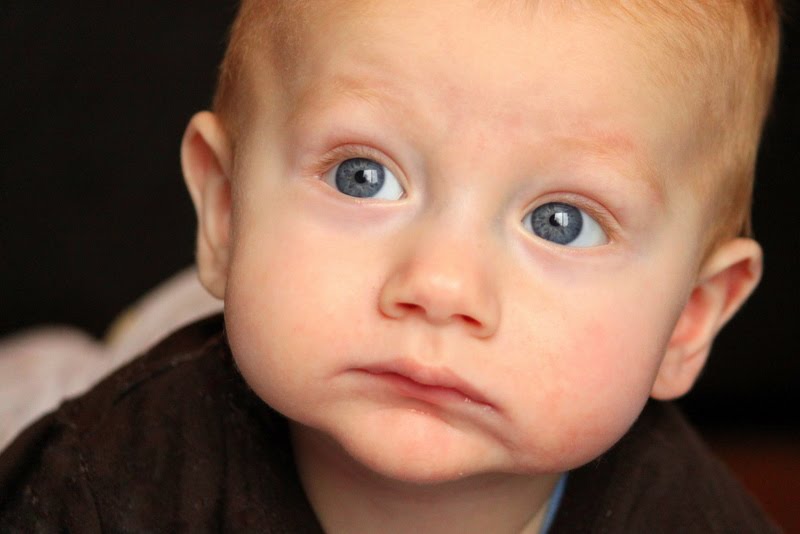 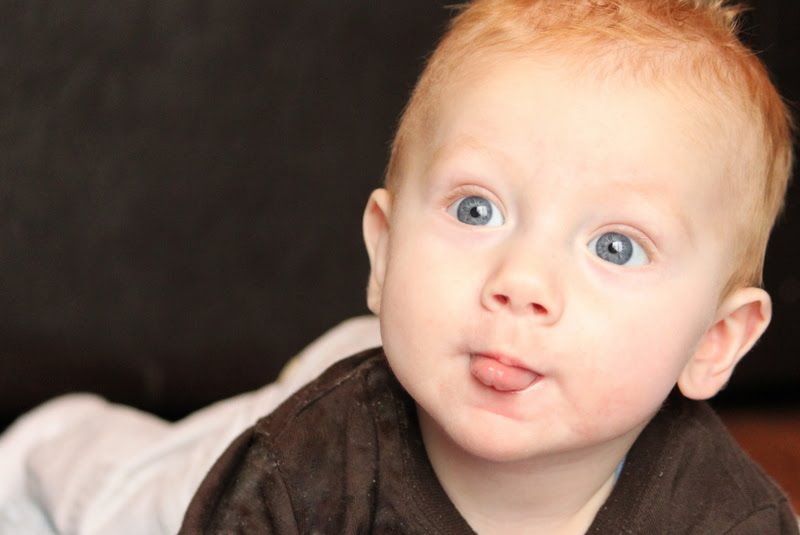 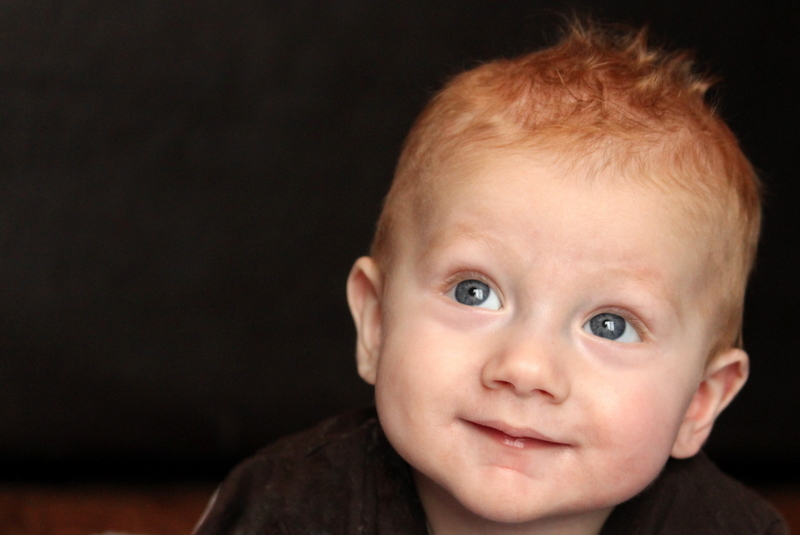 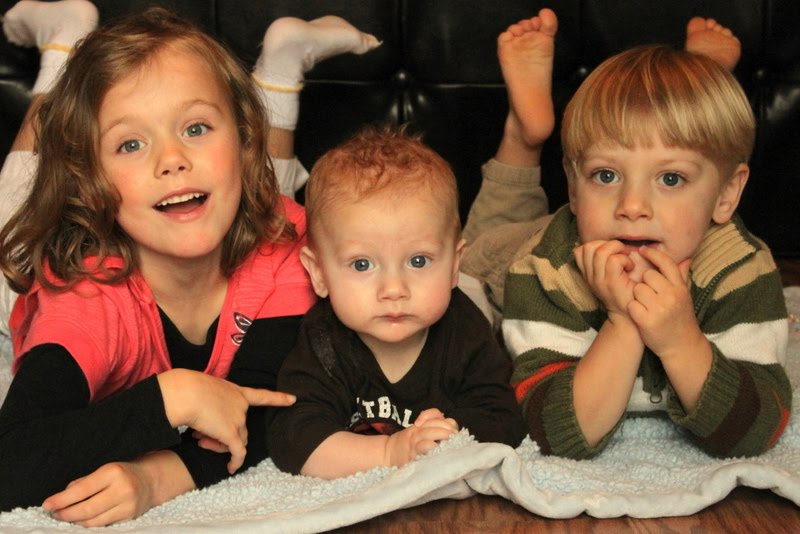 ....and NO planned pregnancies to shake my hormonal balance...

And, as kind of a side note, I've been looking into digital scrapbooking programs (you think you have my new years resolution figured out, don't you? Well, can you blame me? All these pictures have to go somewhere!) - - - but I'm a little overwhelmed by the variety of them. Do any of you use a program that you love?
posted at 8:08 PM 14 comments: