I almost didn't recognize myself this afternoon when I glanced in the mirror.  I was so shocked, in fact, at how disheveled and ragged I looked that I reached for the camera (because don't we all want a picture of ourselves looking disheveled and ragged?). Not moving a single hair on my head, I snapped a quick picture through the mirror and turned the viewfinder around to make sure that my face had made it into the shot (a problem I have sometimes).  That picture shocked me more than my original reflection had and I thought to myself, Wow... She looks just about how I feel.  Something about seeing my face in that frame sent fresh tears loose, and I took one more picture right in the heart of my truest emotion.  Turning the camera around again to check the shot, I stared into those eyes and thought, But... She looks exactly how I feel.


I. Am. Broken.
Tired.
Frustrated.

I have not slept for two nights, and my baby is in the pediatric intensive care unit, working for each breath.  He has an IV in his arm, boarded up to try to keep him from bending his elbow, leads on his chest, monitors taped to his hands and feet, a blood pressure cuff wrapped around his leg and an oxygen tube pouring air into his nose at a rate of 6 liters per minute ('he probably feels like he's stuck his head out the window' the nurse said) to try to force the oxygen deeper into his lungs. 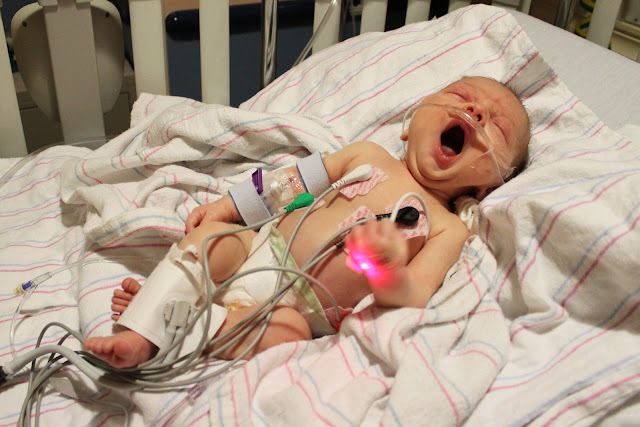 Watching him struggle to breathe has been painful and scary at times.  But he is stable enough and I have no fears about the eventual outcome of this situation.  We just have to wait until the virus runs its course and give him the IV's and oxygen he needs in the meantime.  The worst part for me?  As long as he is on such forceful oxygen, he is not allowed to eat.  Here at 11:00pm he's going on 30 hours since his last meal and he is so, so hungry.  I spent a large part of last night and today coaxing the binkie back into his mouth, rubbing his little head and rocking his body back and forth to try to soothe the hunger out of him.  But if ever you've tried to console your own hungry newborn, you know... 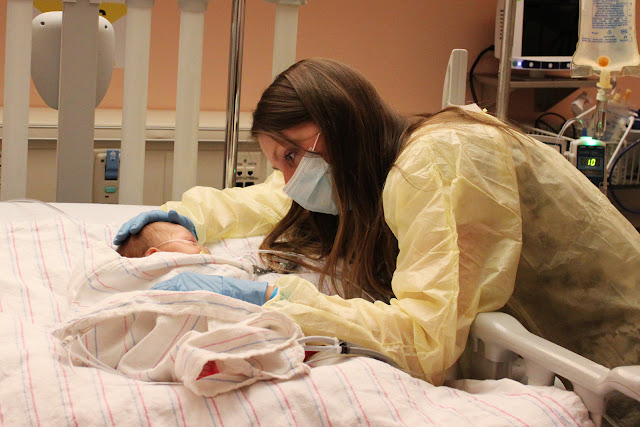 ... you know that hungry sound they make when they're trying to pull anything from their binkie.
... you know that the first few hours are hard.  And that the next few hours are harder.  And that the next few hours are unbearable.  And that the next...
... you know how their eyes open and lock with yours while they continue to pull, pull, pull, and you watch their eyebrows furrow when there is nothing to swallow.  Please feed me.  Confusion.  I'm hungry.  Frustration.
...you know that their cries get weaker and painfully pitiful as the hours wear on and on.  And on.
... and you know how to fix it.  You know what will make those cries stop.  You know what will help them fall asleep.  And you have it in your power to give it to them.  You know that your biggest job as a new mother has been to feed this precious child, but you have to force yourself to remember through those heart-wrenching cries that breathing is more important than eating.
... so you put the binkie back in and can't even try to hide your tears from the nurse. 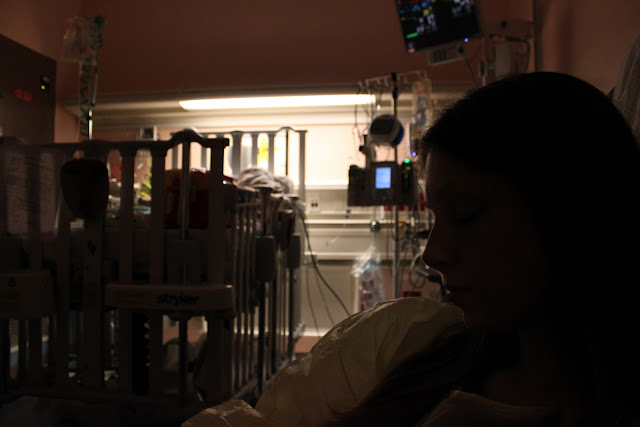 They are giving Timothy sugar water through his IV, so he is not dehydrated.  But they are slightly concerned about his nutrition since he is such a little guy and so attempted to place a feeding tube down his throat, past his stomach, and into his intestines.  Twice they tried, and twice they failed as the tube kept getting coiled up in his stomach.  They briefly talked about giving him tiny bits of milk through the tube and letting it empty into his stomach, but the whole reason he can't eat in the first place is for fear of spitting up (which babies do so frequently).  If he spit up while the oxygen was flowing forcefully through his airways, the chance of forcing some of that milk down into his airways is great... and ultimately deemed too risky, even with tiny bits of milk.  The only other option they were comfortable with was to wait.  Wait.  Wait.  Wait until he could be weaned off of the oxygen. 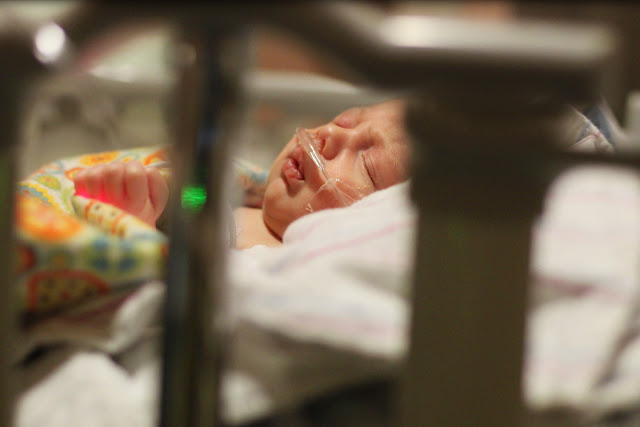 Brian came to the hospital this afternoon and, after seeing my disheveled, ragged face, sent me home with a bag of chocolates and an order to sleep. 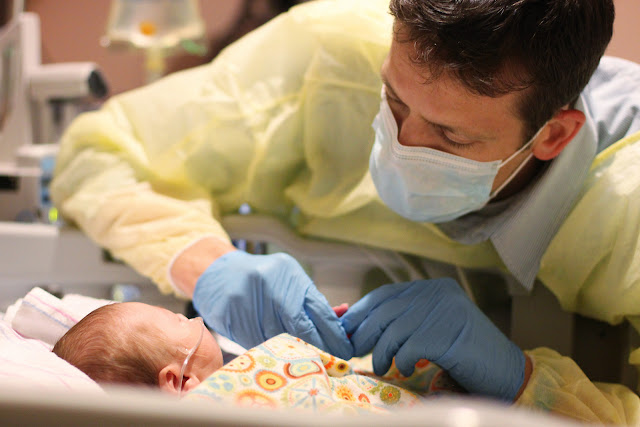 He took my place at the bedside and offered to stay the night.  You can't feed him anyway, Linds, he said.  Go home and play with the other kids.  Take a walk; it's a beautiful day.  Take a shower.  Sleep in our bed.  And try not to worry about Timothy.

Thank you, Brian.   You were right... it was a beautiful day, and after two days cooped up in a dark, windowless, cheerless ICU room, the sun felt like medicine to my soul.

And I have a feeling that things will look brighter after a night of sleep...
posted at 9:05 PM