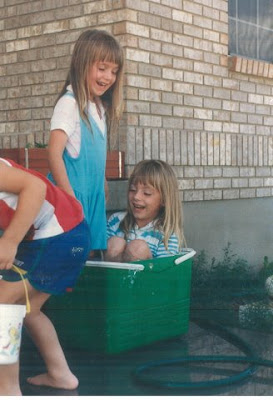 Last month, my mom sent this picture of my sister and me (with my childhood best friend's backside making an appearance as well...) with the only message being, "Sooooooo, do you still think you don't look alike?" Alright, alright - I definitely see the family resemblance here! (In case you're wondering, I'm the one sitting in the freezing hose water.) Since Michelle and I are so close in age, we grew up being friends - and from the moment McKenzie was born, I knew I wanted to give her the same kind of 'live-in' friend that I had. When Carson was born - and confirmed, indeed, a boy - I felt a little sorry to see McKenzie's future without a sister close in age. And, when this coming baby was deemed a boy as well, I felt the same twinge of sadness as I realized that McKenzie will never have the same fun, close, friendly relationship with a sister that I had...in her growing up years, anyway.

But, even though McKenzie doesn't have a little sister, she's determined not to let that stop any fun: 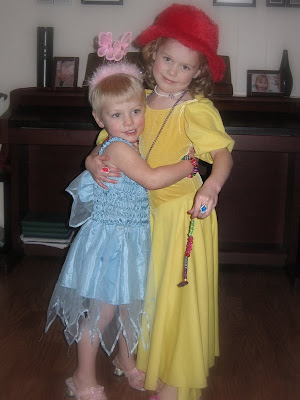 I was a tiny bit surprised by my reaction when they came up the stairs dressed like this...instead of an 'Ohhhhhhhh, how sweet!' it was more of a 'spit-my-milk-out-of-my-nose-in-laughter-because-you-look-so-ridiculously-funny!' type of reaction. Nope - nope, nope, nope. Carson does NOT make a beautiful fairy! Cute, maybe, but not beautiful! McKenzie gets along fantastically with her little brother - and I'm realizing that, maybe the way I had it wasn't the only best way. Besides, moments like these are MUCH funnier when a boy is involved!

And, McKenzie definitely has the gold medal when it comes to booty-shaking! She has the grace of a lioness, I tell ya! Carson, on the other hand, seems to have the grace of a baby penguin walking on land... 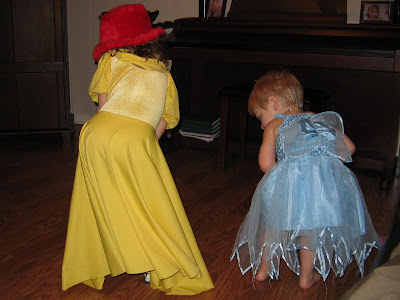