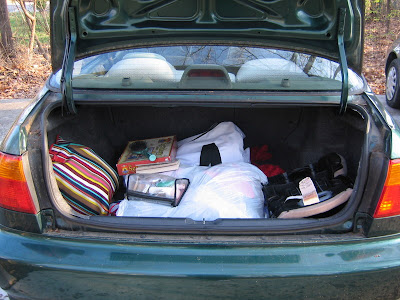 "All my bags are packed, I'm ready to go..."
"I have the best idea!" These are five words that are generally NOT spoken by me when it comes to thinking of exceptional gifts to give. I try, really, I do - but trying doesn't seem to stimulate any great ideas. No, usually my gifts are pretty lame and, especially when it comes to my husband, are focused on a 'well, we need this' theme. Christmas presents and birthday presents have been known to consist of things like ... well ... okay ... wow ... this is sad ... so Brian and I just tried to brainstorm about past presents, and we can't even REMEMBER one! So, that shows you how memorable they are. Hmmm ... maybe I'm worse than I originally thought ... :)

Anyway - this year, for Brian's birthday, I finally came up with a wonderful idea. An idea that was completely geared towards Brian's interests. An idea that had me saying, "I have the best idea!"

Two days, and one night up in the historical town of Williamsburg, VA. No, really, it's a good gift because it encompasses two of Brian's passions in life: traveling, and history (and, if you know me, you realize that this was a completely selfless decision because there are few things that put me to sleep faster than history lessons *snore* - it's okay...you can call me uncultured). And, to put the icing on the cake, all of it was a total surprise for him...no stress, no worry, no planning, no packing. Plus, he had two full weeks off of work (making the scheduling a breeze for me!)

So there I was, a week before his birthday, confident that I had the best birthday present ever (at least, compared to any previous gift) - - - but, as I've come to learn, things don't always work out the way you plan, and I watched throughout the week as wrench after wrench after wrench was thrown into my masterfully engineered plans.

Sunday before departure: Scheduled departure day, Wednesday. I had arranged for the kids to spend the two days at a friends house. I had spent hours online researching all the bed and breakfasts, all the restaurants, and all the fun activities. I had a spreadsheet that ranked all of the Bed and Breakfasts I was interested in based on size, outside appearance, quaintness, price, parking, proximity to the downtown events, etc. I packed our bag, and the kids' bag (while he was gone) and hid them under our bed. Wrench #1: I watched him get excited and fawn over the TV as Selection Sunday was going down, and I realized I had made a grave mistake in neglecting to account for the first round of the NCAA tournament that would start on Thursday - the second day of our trip. I know that, as much as Brian loves history, he loves basketball much, much more - and I could just see him dragging his feet all around Williamsburg while those sacred basketball games were going on. That night: stress, stress, stress. Should I bag the whole trip? Should I get tickets to Duke's first round game instead? Should I move the whole vacation up a day? Could I get everything ready by Tuesday? Research, research, research - how much did a first round ticket cost? How far away was Duke playing? When did they play, and how good of seats could I get? I finally made the decision to move the trip up a day and leave on Tuesday instead.

Monday before departure: Scheduled departure day: tomorrow. I started calling the Bed and Breakfasts listed on my spreadsheet to make a reservation. After haggling with a few, I found one that would be willing to give me a great last minute deal and booked it for the following night. A few hours later, Wrench #2: Brian came home from work and said, "Hey Linds! I have to go into work for a few hours tomorrow...but after that we'll be home free for the next week and a half!" Faking excitement for the week and a half off, I secretly grabbed the phone and tried to figure out what to do with my new situation. Basketball? Now that I had made a reservation, I couldn't cancel without losing my registration fee... I did what I thought the next best thing would be: call the Bed and Breakfast, change the reservation to Wednesday night, and beg to be allowed to stay in their common room after checkout on Thursday to bum their WIFI and watch a few games before we headed back home. Success. I started to get a little excited about watching basketball with Brian without the kids interrupting us every few minutes...

Day of Departure: Estimated departure time: 8:45am. Happy Birthday, Brian! I woke up at 5:45am (an hour I haven't seen in a blissfully long amount of time - it was unpleasant) showered, packed the last few things into the car, got all the ingredients out for a big, birthday breakfast, dried my hair (that doesn't happen often, either!), and was just about to finish putting my makeup on at 7:00 when McKenzie walked into the bathroom holding a big, blue bowl.

"Hey, Sweetie! Guess what day it is?!?" I grabbed my mascara tube and unscrewed the lid.
"Mom?" McKenzie said in a complaining voice, "My tummy hurts."
"Uh-oh," I said. "Do you need to use the toilet?"
"Maybe."
I finished putting my mascara on right as, Wrench #3: she puked into the big, blue bowl.

But, today it was. She threw up again, and then again before 8:00 and I saw my plans swirl down the toilet with each flush. 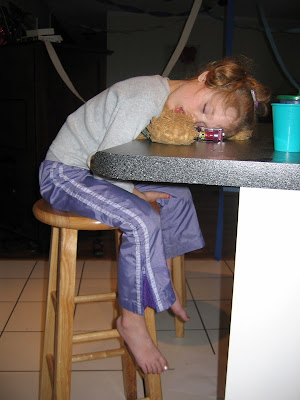 Devastation, folks. Devastation was the word of the day. By 8:00 it was clear that we were not going to be able to go - and I dissolved into a mess of tears that remained throughout the entire day. Funny thing about pregnancy hormones, once I start to melt, there's no stopping it. And boy, did I melt! The surprise came pouring from my mouth almost as fast as the tears were pouring from my eyes when Brian came out of the bedroom.

I spent the rest of the day rearranging our trip to another time, crying, making homemade oreos from scratch that turned out awfully flat and lifeless, 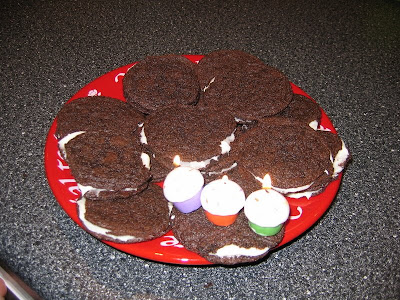 (but I had some great help!) 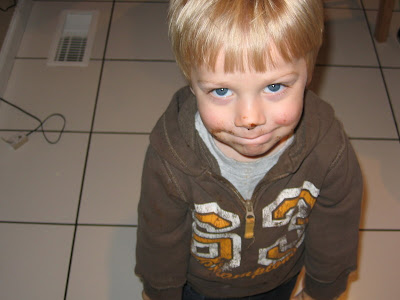 crying, taking care of my sick girl, feeling guilty for crying about my silly disappointment when my daughter was so sick and my husband was having a birthday, crying harder about that, telling Brian about all the plans and all the wrenches that had happened in the past few days, watching a movie with the family, and finally talking to my good friend, Brooke, who somehow brought everything into perspective, dried up my tears, and made me realize that it wasn't that big of a deal anyway.

As in most situations, a gold lining came out of it. Brian: "So, Linds...I was just on craigslist and happened to see a couple of tickets to tomorrow's Duke game for pretty cheap...what if we went ahead and did that for my birthday, and then used the Williamsburg trip as our babymoon?" Well, I felt so terrible for how the day had turned out that he could have asked me if he could buy the whole entire Duke team and I would have said yes!

So, we got a couple tickets and ended up having an incredible time at the first round of the NCAA tournament to watch our Blue Devils play (a really, really, really incredible time - it's definitely a night I'll always remember). I guess there was a reason the seats were so cheap...since we were directly behind the basketball hoop...but it was so awesome to spend some real time with Brian, and to sit and watch a Duke game surrounded by the excitement that comes from the NCAA tournament. 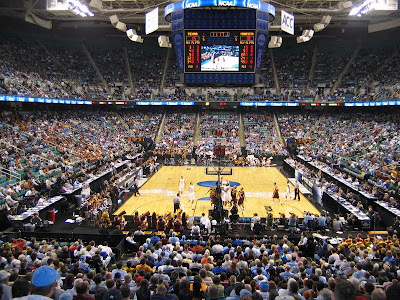 Happy Birthday, Bri. Thanks for being so wonderful. :)
posted at 7:39 PM