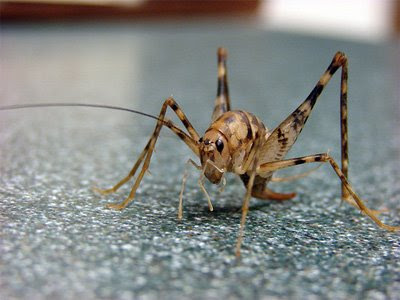 Crickets, folks. We have them...lots of them...downstairs. They only come out at night, after the sun has left the sky - and at that time, I avoid those basement rooms as much as I possibly, possibly can. I've realized that almost anything can wait until tomorrow morning if it involves stepping downstairs.

I don't really like bugs in general, but these crickets are in another league. They are called camel crickets and, not only are they extremely ugly, they have some seriously nasty quirks. Most bugs will run from you if you get too close - they scatter into the shadows, or hide behind the closest piece of furniture. But not these crickets. Oh, they seem to try to jump into the shadows but, you see, they're rather uncoordinated. If I get to close, they actually jump towards me - and bounce off - and jump sideways - and land upside down - - - it's disgusting. And I've seen them jump at least 4 feet high. I was reading online about them, and some people have seen these gross crickets jump so high that they actually hit the ceiling! I have had more than my fair share of unwanted encounters...the worst being when I reach down to grab something and one jumps into my palm - and bounces off - and jumps sideways - and lands upside down - - - ewwwww!

Well, I was brave tonight. I hadn't quite finished all of my laundry by sunset, and I decided to venture down there to change out the last load. Of course, I was very on edge - scanning the whole area before placing my foot close to any potential cricket-home. It was quiet, and I was almost there when I looked down and saw this: Sorry about the bad picture - I was still downstairs, after sunset, so I just wanted to snap a picture and get out of there! This bug is about 4 inches long - FYI.
I screamed. I couldn't help it! And then, when I realized it was plastic, I kicked it across the room. I don't know who thought it was a good idea to give my son a package of bugs that looks so real that it elicits a genuine scream from his mother - but I suspect a 'Grandma Package' had something to do with it.

So, Jean, I just want you to know that I blame you for my near heart-attack tonight. :)
posted at 5:34 PM