Next up, Brian and I took Miles and Timothy to St. George. But on our way, we knew we needed a pit stop for dinner. So we pulled off in Mesquite in search of something fun. We drove by a steakhouse but ultimately decided it wasn't quite right for our crowd, we drove by a Mexican place, but Miles didn't feel like Mexican, and we quickly discovered that there weren't a whole lot of options in Mesquite. Brian drove around while I searched on my phone, and finally... there it was... the idea of all ideas in my head that I knew would feel like the ultimate party, that would have both boys spinning in excitement.
So I googled: Buffet in Mesquite. 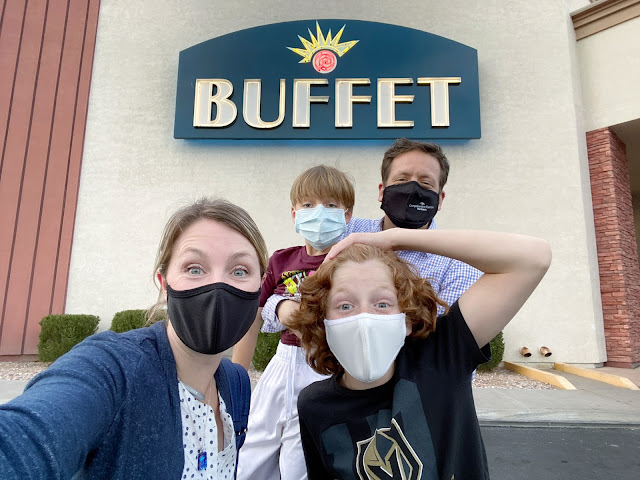 It did not matter that it was potentially the dumpiest buffet in all of southern Vegas, because it was all you can eat. And to a kid (well, to my kids (or to other kids who have similar voracious appetites)) that is a most magical thing. You can see the excitement spelled out all over Miles's face.
At the end of the meal Brian asked if everyone was done eating. Miles said that, yes, he was stuffed, and Timothy said, "Yep. I am stuffed, too. Stuffed with happiness!" It was probably the biggest hit of the whole vacation.
Our second stop was maybe the second biggest hit of the whole vacation. The hotel room. 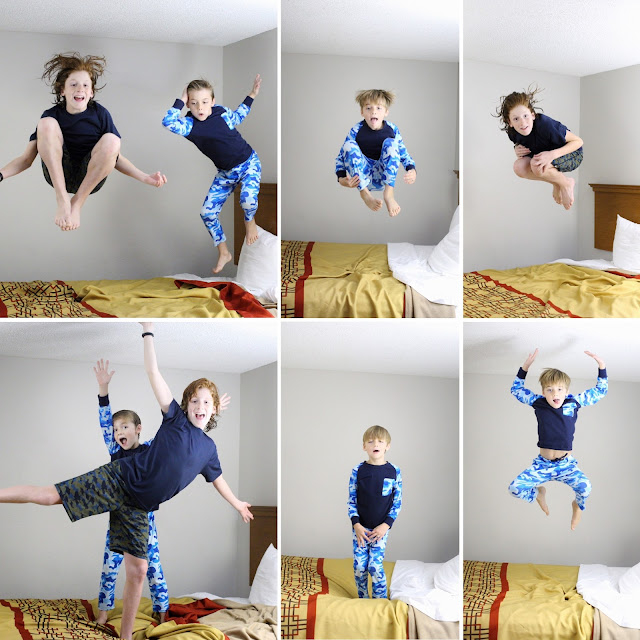 It did not matter that it was potentially the dumpiest hotel in all of St. George (it was the last room available that weekend in St. George (golf tournament we didn't know about until it was too late)), because it had a springy bed, and mirrors in fun places. 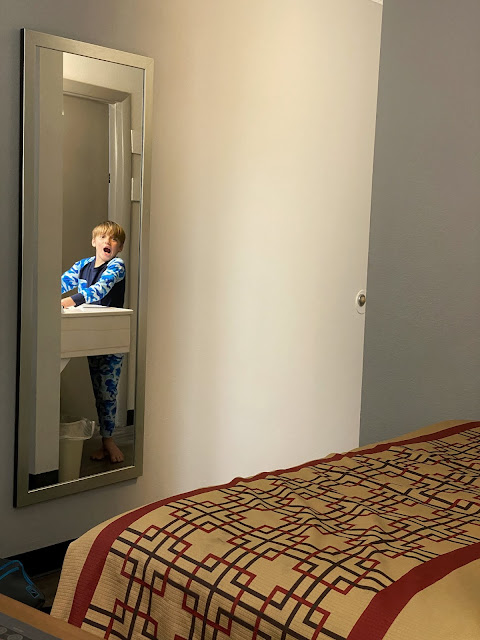 And when we filled it with board games and laughter we couldn't care less about the scratchy sheets. 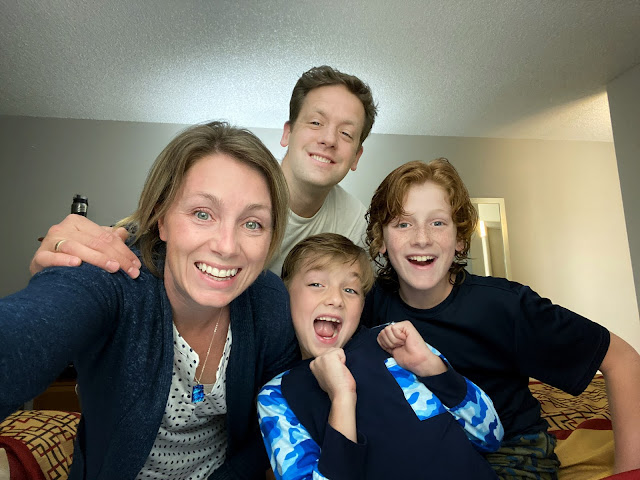 The next morning we went out in search of the coolest restaurant we could find. 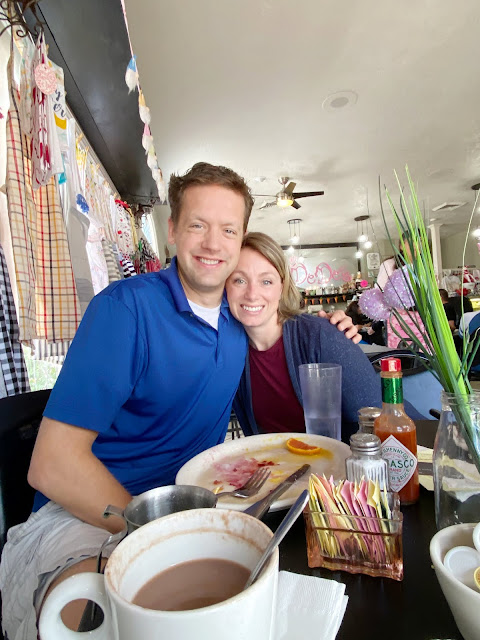 But because everyone else in St. George seemed to have the same idea, we ended up in a stuffy cozy little corner in a stuffy cozy little restaurant. I didn't really know I could feel claustrophobic in an eating establishment, but when you can't see one square inch of wall space because the whole place is filled with cutesy hand towels and little wall plaques, and when you're not quite sure if you can scoot your chair out without warning the people at the table next to you, you start to develop these things.
The kids were famished and a bit whiny about how long it was taking, so we passed the time with several games of 'how many ______ do you think are in ________?' And, closing our eyes, filled in the blanks with thing like, how many ounces do you think are in this bottle of ketchup? or how many individual letters do you think are on a single side of the sugar packet? or how many purple eggs do you think are on the table? When we exhausted all of the things, we tried to stack up sugar packets as high as we could and waited and waited and waited...
What I didn't know was that, after we had been seated, we had been promptly forgotten. And after about 30 minutes with no activity (not even silverware placed in front of us or a drink of water), I finally went up to the front counter and gently reminded them of our presence. The kids were grumpy enough by that point that they didn't even notice that the teenager bringing us our silverware held the prongs of the forks and the bowls of the spoons tightly in his naked hands. As he handed the handles to us, Brian and I caught each others eyes and slowly shrugged, signaling that we would pretend that there wasn't a global pandemic going on and that it wasn't just a little bit gross of a practice even if there weren't one.
We did eventually order and receive our food. And life felt happier then. 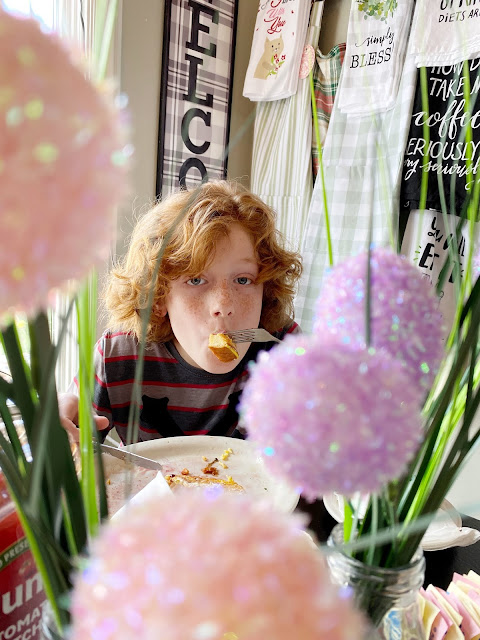 After breakfast we wandered over to Pioneer Park where we climbed the giant, red rocks and held ourselves together while the wind tried to whip us off the mountain. 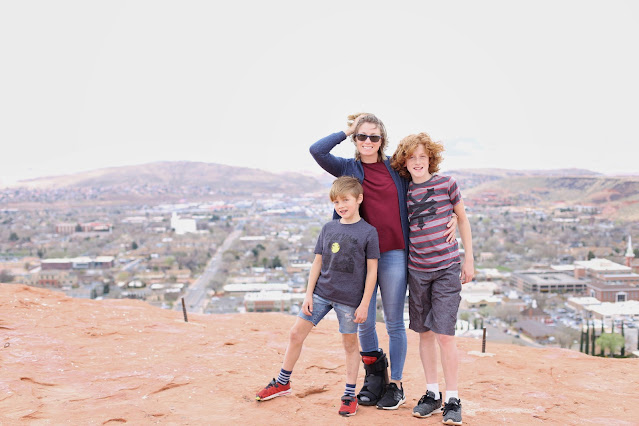 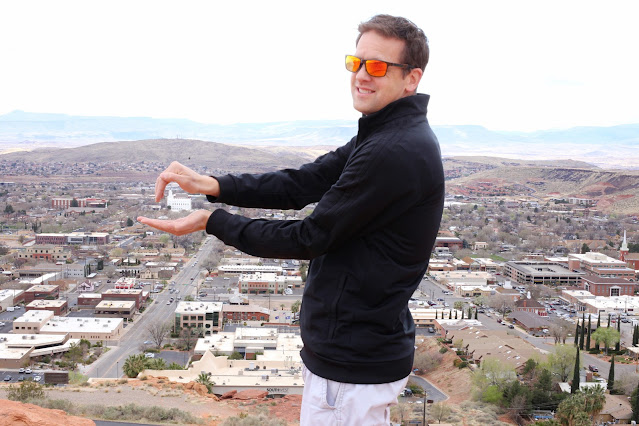 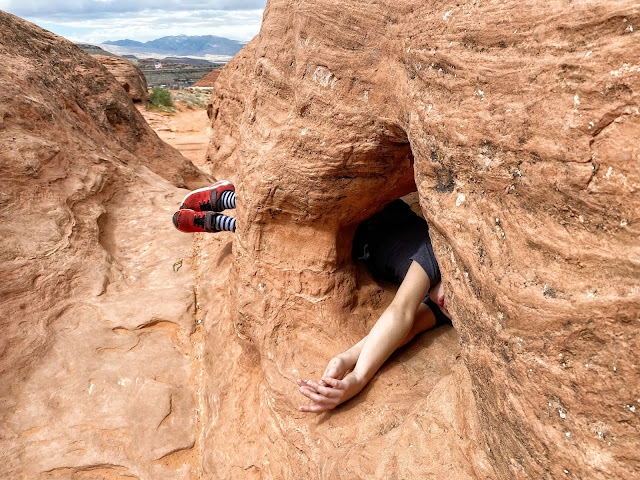 The outdoors is truly the biggest playground, and so much fun. 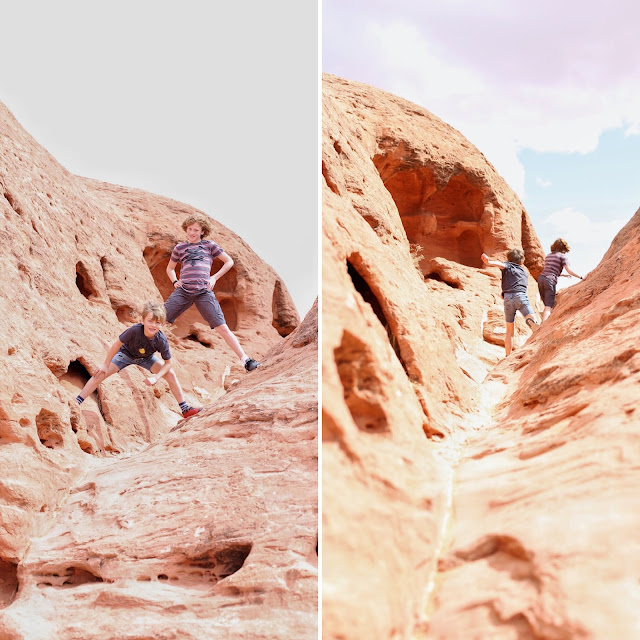 All the climbing made possible by my boot. 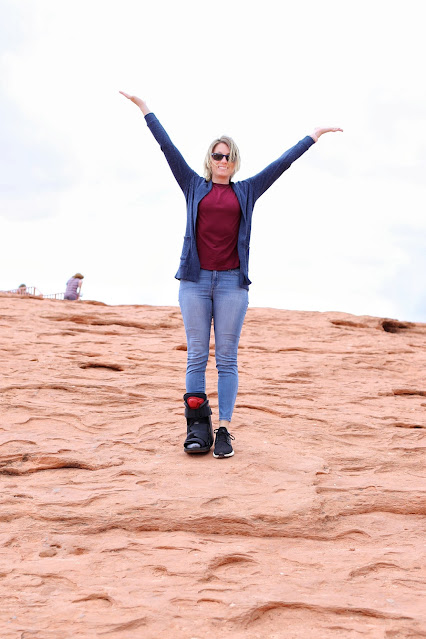 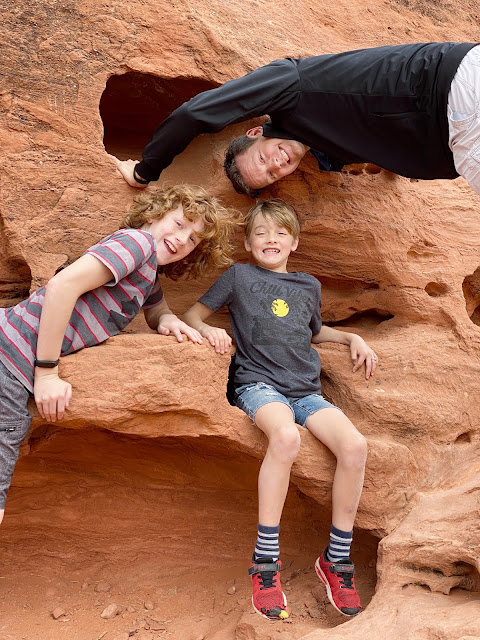 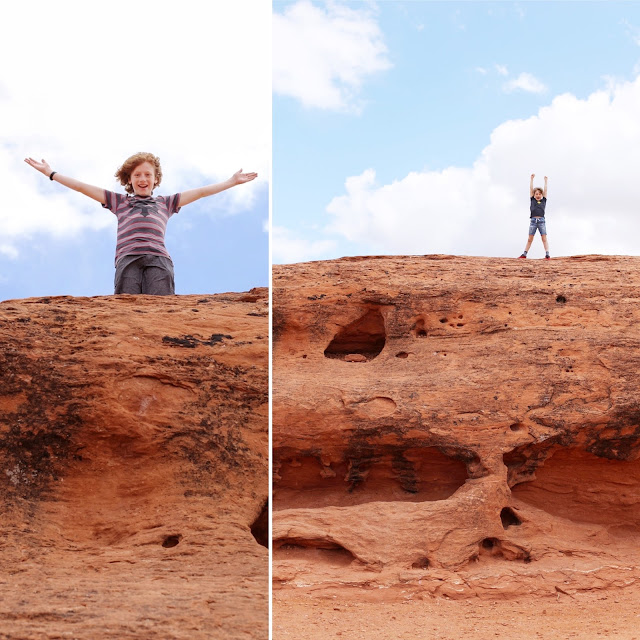 When we'd had our fill of the red rocks, we decided to hit an indoor water park which was a big hit as well. But as we neared the parking lot we realized that, while we had brought our swimming suits, we had neglected to think about towels. And a quick call to the rec center confirmed our suspicions that, because of covid, they were not giving any out. So we called around to all the nearby stores and finally found some hand towels at the $.99 store. You can imagine their quality. But they served their purpose nicely and only smelled a little bit like lighter fluid and only shed on us when we were wet. 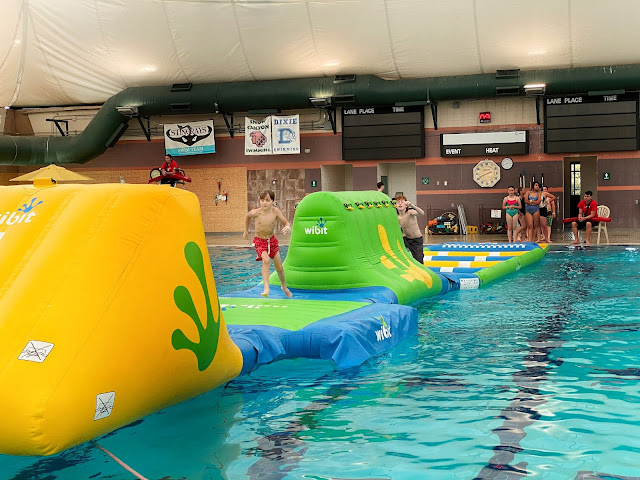 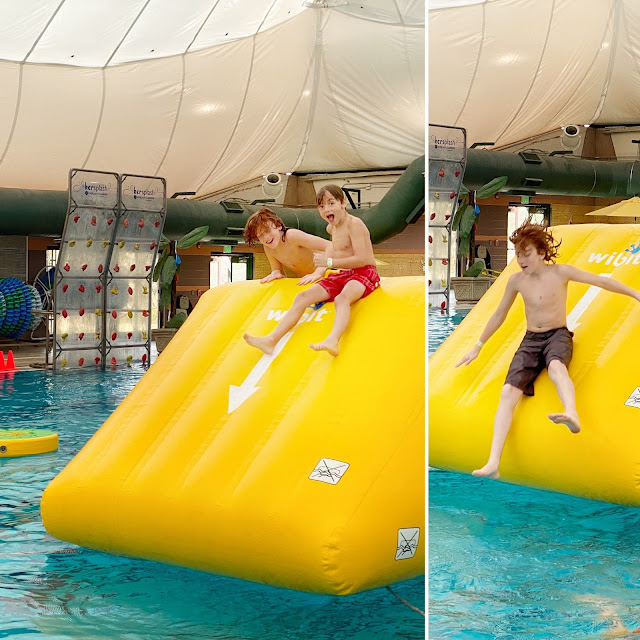 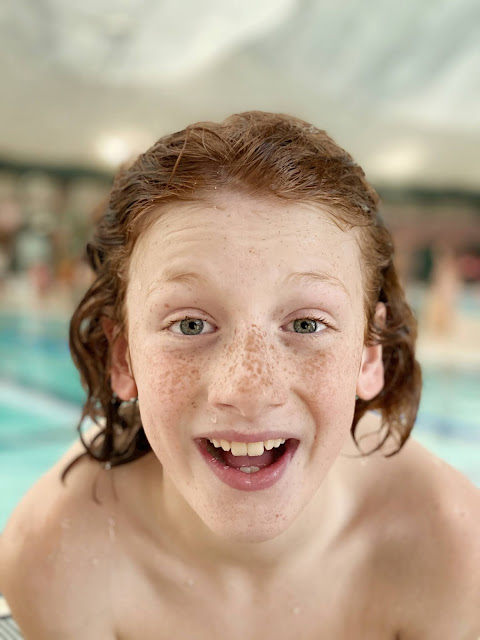 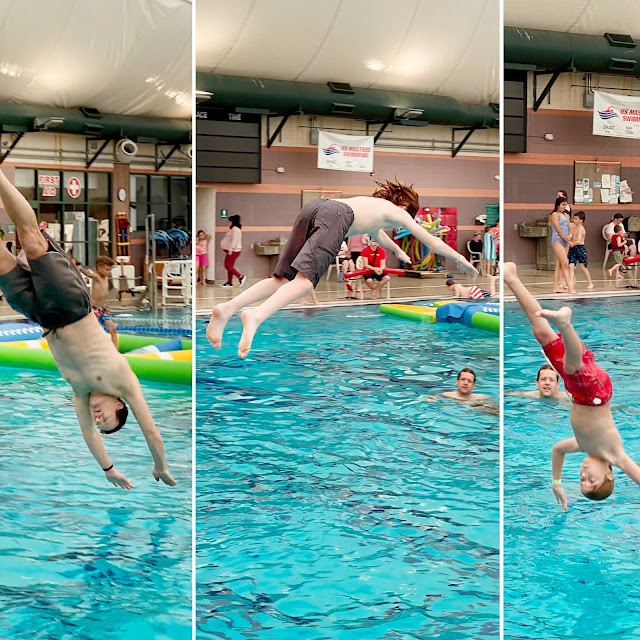 After the rec center, we drove back to Boulder City where we pulled up into a parking lot to watch a drive-thru movie of Abominable. Which was, actually, quite delightful.
It was another fun vacation in the books!
posted at 4:21 PM