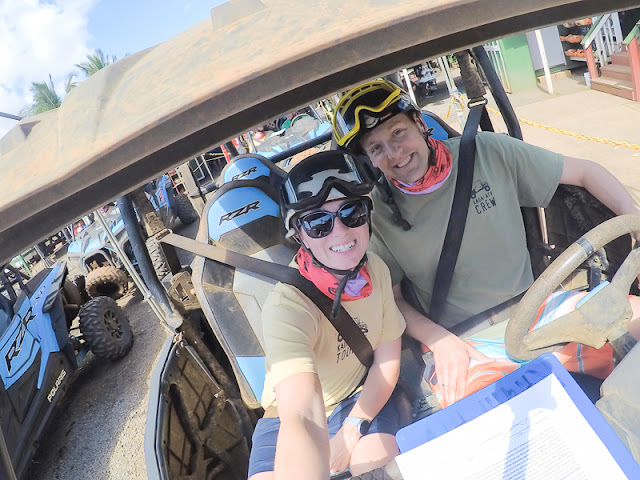 Wednesday was ATV day. After sitting and listening to several pages worth of instructions (including do NOT swerve off the road if a chicken or a wild pig runs in front of you because there are many of them and only one of you), we were all suited up and ready to ride. 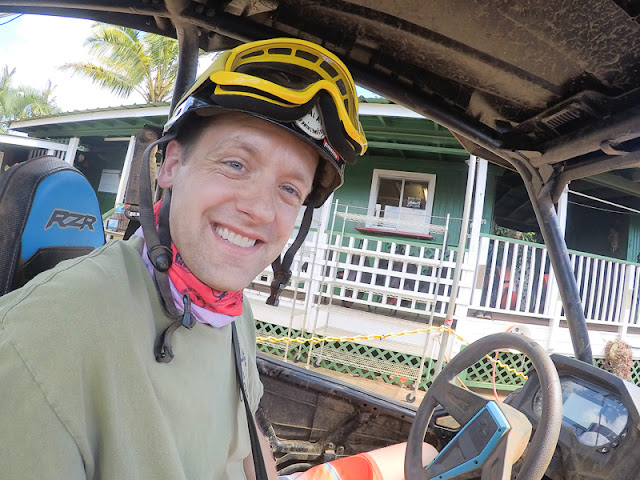 We rode right through the center of Kauai and, man, was it beautiful.

After traveling along for a while (and eating everyone else's dust because we somehow got in the back of the line), we came to a tunnel that was, in fact, blasted through the rim of the volcano that formed Kauai. I mean, I know volcanoes are a thing, and I know they're real, but there was something about physically going through the rim of one and ending up on the inside of it that felt completely awesome. I can only imagine what it would have felt like if the island was still sitting on the hot spot. Maybe that wouldn't feel so awesome, actually. That might just feel scary.

Our tour guides snapped lots of pictures along our tour and sent them all to us - which was wonderful because they knew the best spots. So you'll see their stamp in the corners of their pictures.

And once we were inside the rim, in the center of the volcano, the view was so inspiring. (They took this next picture, too, and I tried to take the stamp out of the corner because it distracted from the beauty of it, but I wasn't invested enough to do it right, if you're wondering what's up with the funny shadows over there, ha).

And here we are, coming around that corner!

We stopped here and had a little trivia moment when our tour guides asked 'how many movies and television shows can you name that were filmed in this spot?' Out of 72 (SEVENTY TWO!) we were able to get about 11 as a collective group. I was not helpful in this game after the obvious Jurassic Park was named.

Our tour guides were funny and pulled out a little toy dinosaur to stick in the frame as they took this picture. That dinosaur is probably about 5 inches tall in real life, but they held it up to the camera super close and told us to look to the right and act scared. 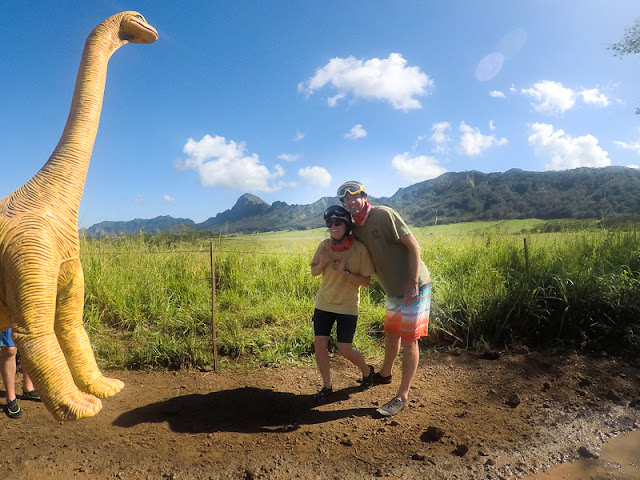 Later we toured a bunker built right into the mountain side that was used in World War II. It was humbling to walk around in the dark and think about the many men that had to live inside that thing while they fought for us. 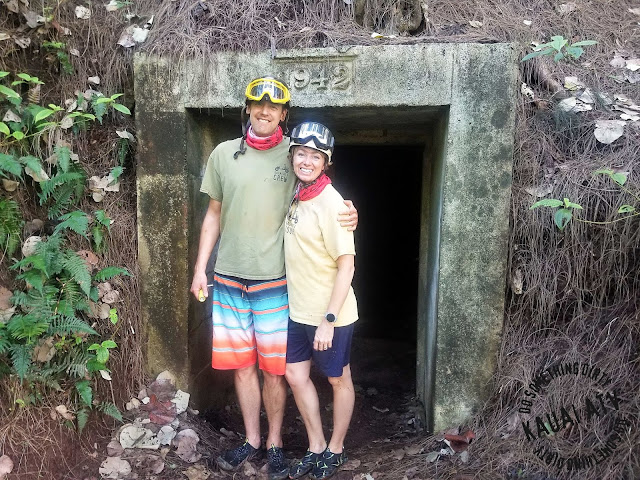 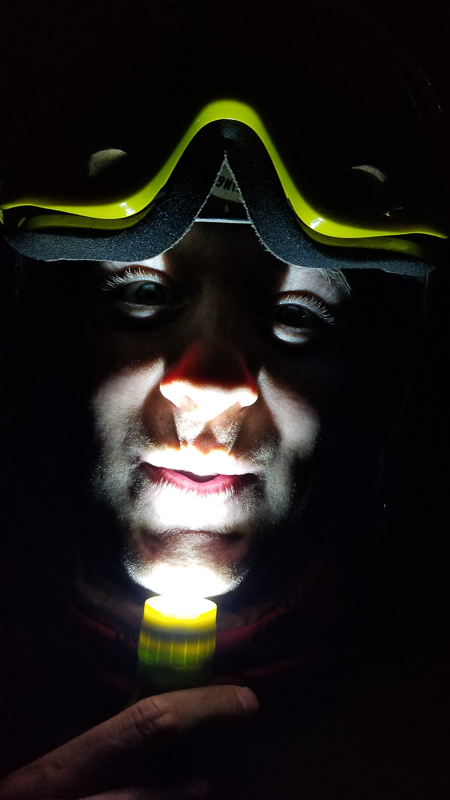 Further along the trail we came across this beautiful waterfall where we stopped and had snacks. 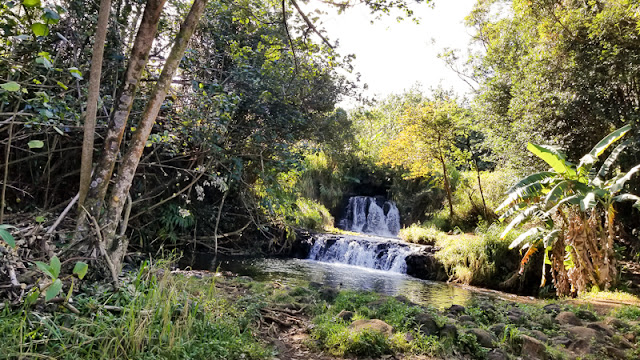 One of our tour guides ran up the waterfall and cannon balled right off of it into the pool below. The day was not what I would call hot, and the water was definitely what I would call freezing, so there wasn't a chance that I was getting in there.

We took another picture by the side of the falls and, thankfully, captured the fact that I was unknowingly sporting an absolutely fantastic unibrow on my dusty face. 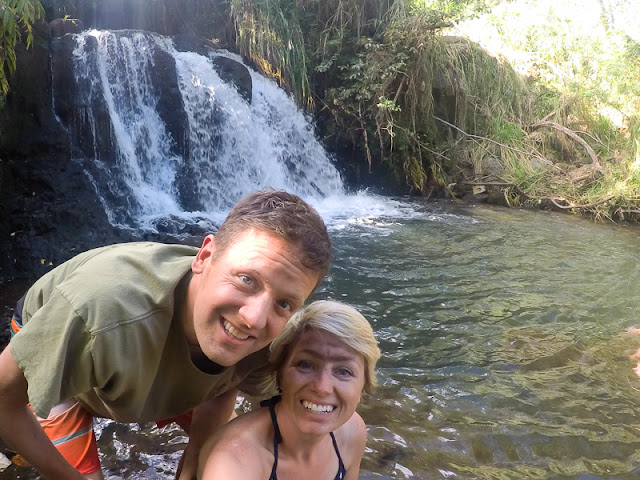 Brian jumped in next. And then the peer pressure started to mount. You guys, you know how much I hate cold water, right? But I JUMPED IN!!! 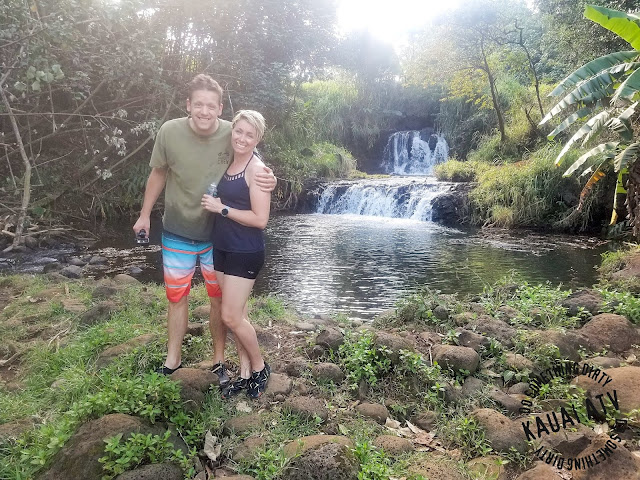 I totally did. Up onto the rock I climbed with my GoPro in hand (to document such a momentous occasion for my posterity, of course), and then down into the water. No pictures, sadly, but the video is awesome.

After we dried off a bit, we put our dusty clothes back on and headed back the way we came. 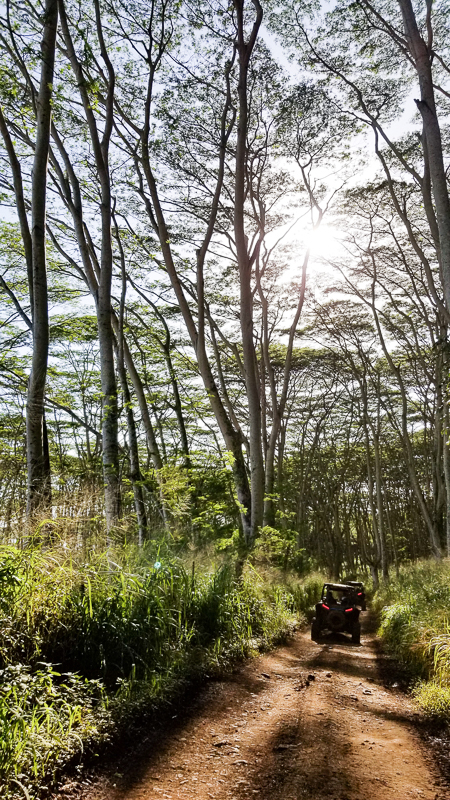 And, thankfully, we didn't run over any chickens.

When we got back to our Jeep we decided we wanted to drive to my favorite beach, Polihale. It is majestic and beautiful with rough waters and gorgeous beaches right up next to the west side of the Napali Coast. But getting there is no small task and it is the sole reason we rented a Jeep for the week. It takes 30 minutes to travel a 5 mile, poorly maintained dirt road that dumps you onto this beach (and then takes 30 minutes to get back out again). It feels like you're on an amusement park ride the whole 30 minutes as your seat belt locks you into position with every lurch and bump. Each car we passed along that road held laughing people, and we were laughing, too, at the sheer craziness of driving along such a road. And it's part of the reason why I love this beach so much. 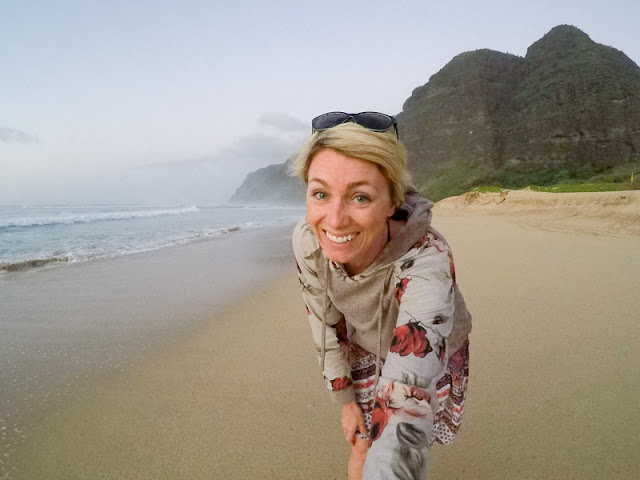 It offers incredible views of the sunset and our plan was to sit on our towels, read our books, and wait for the sun to go down. We couldn't bring ourselves to sit for the first long while, though. It was to amazing to stand close to the water and see the rough, tall waves. It doesn't look that impressive in this next photo, but if you count, you can see 5 rows of waves all coming in at once. 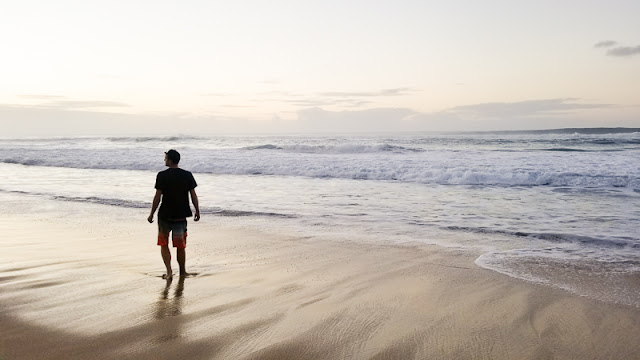 There was also some kind of crazy rip current about 20 yards out from the surf that moved through the water almost parallel to the beach and was only really detectable when a seemingly random 'chosen' wave would break and start rolling towards the shore, cross its path, and then we'd see a spray of water shoot up from the rolling wave on our right and zip across the ocean until it disappeared on our left. I've never seen anything like it. It was amazing. Also a little bit scary and I stayed far away from the breaking waves. Mostly, I guess... they were big and fairly unpredictable so I could stand with my feet completely dry and then have my thighs wet when the next wave rolled in. I only made that mistake a couple of times. 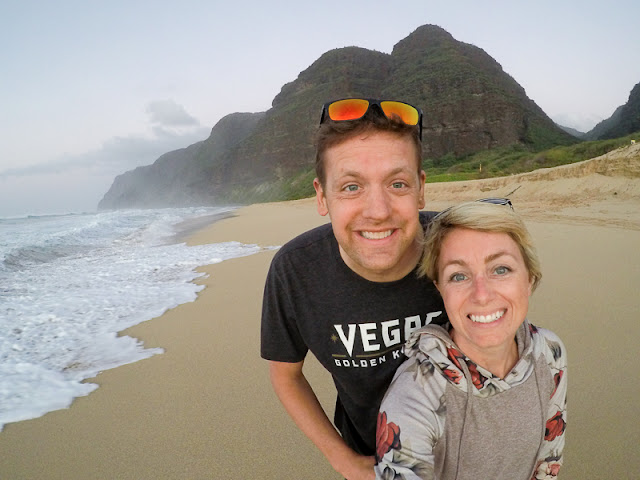 Eventually we pulled our eyes away from the water and sat on our towels to soak up the last few rays of the setting sun. We made sure to sit right at the base of the sand dunes (you can see how far away they were from the surf in the picture above) to make sure we were in the clear and pulled out our books. I took my water shoes off, set them at my side, rested on my backpack, and got lost in my book. 20 minutes later Brian yelled, "it's coming!" and I looked up to see the giant wave rushing right at us. I jumped up just as the wave crashed into us, turned around in time to see Brian's phone for the split second before the wave covered it, plunged both of my hands into the water (book still in hand) and b.a.r.e.l.y grabbed his phone as it was being pulled with force back down the steep hill towards the ocean.

Phone saved. Book and towels and clothes all soaked. Water shoes all the way gone forever.

I was a little big grumpy after that (I liked those water shoes and I like being warm and dry), but it's still my favorite beach.
posted at 8:21 PM