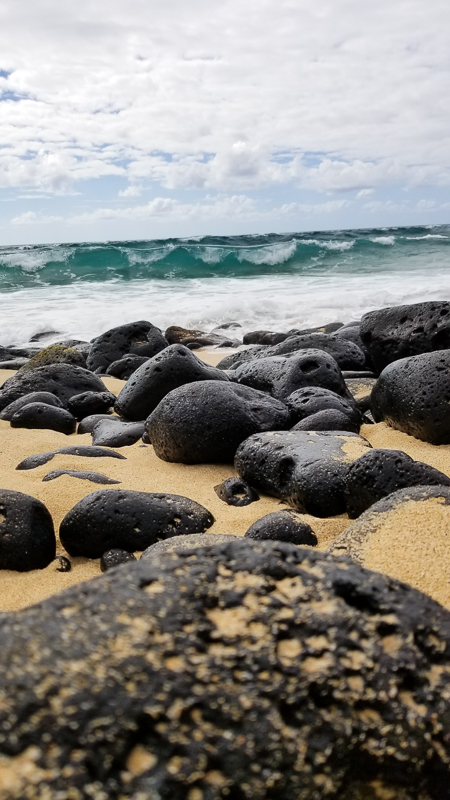 Thursday was r.e.l.a.x. day. I walked around for a little while taking pictures of all the things that struck me as beautiful while Brian finished his morning in the conference. 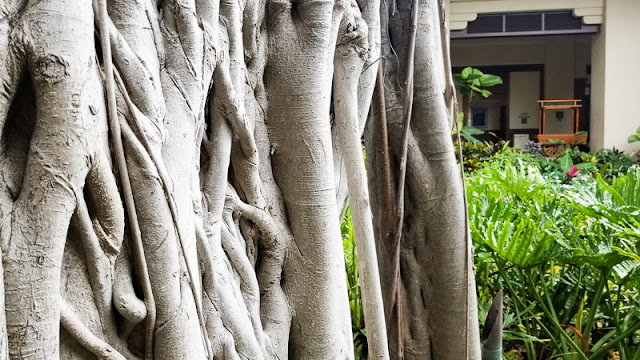 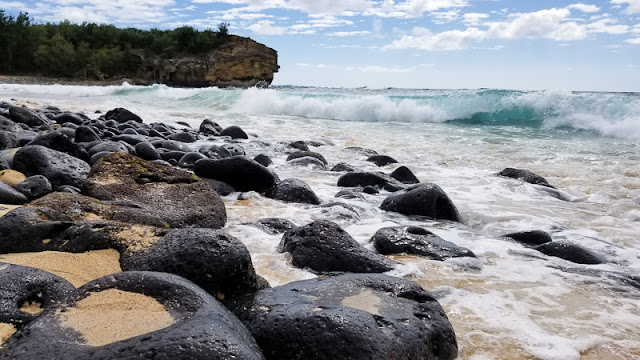 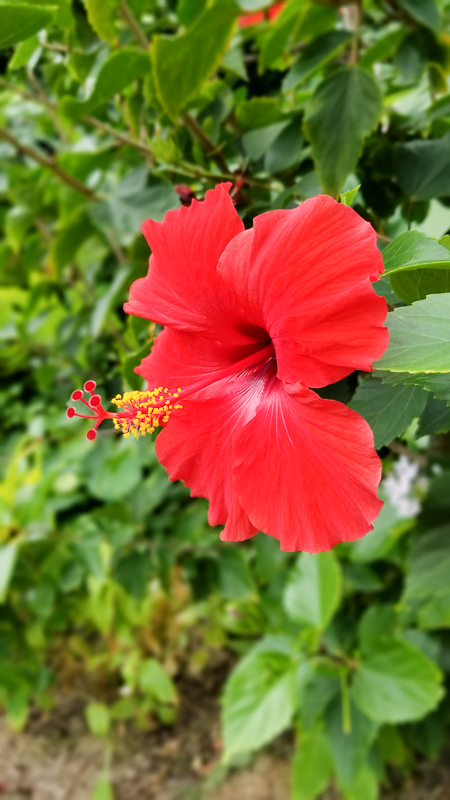 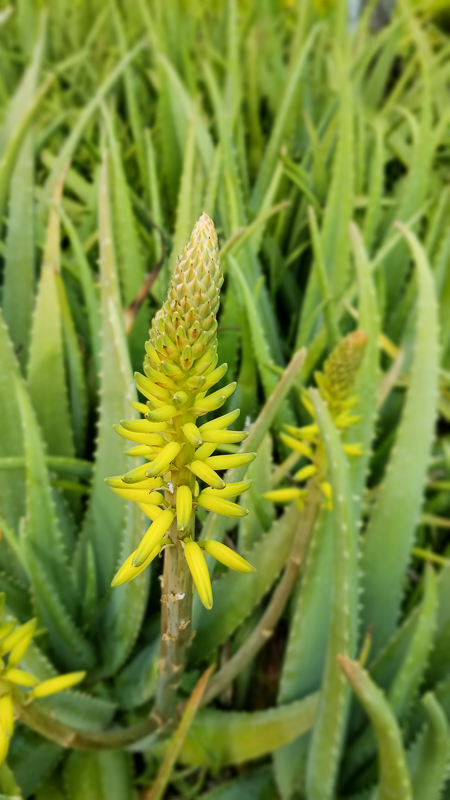 And when he had finished, we decided to drive out to a nameless (to us) beach we had passed on our way out to somewhere. The sand was hard and packed as we turned off the paved road, but as we got closer to the shoreline the sand became softer and deeper. A big part of me wanted to take the Jeep all the way out to the water and drive along in the sand like some of the other trucks were doing (it seemed adventurous), but it had only been two days since I'd seen a group of men working to dig a small pick-up out of a sand-rut, and the image of their frustration and hard work kept floating up to the top of my consciousness. We decided against pushing the Jeep any further and walked the rest of the way. We put our towels out on the sand and talked and read and talked and read and talked and read the afternoon away.

But I kept seeing trucks drive by us, tires handling the sand without any trouble at all, and after a couple hours of watching and thinking I decided to give it a try. If for nothing more than a fun picture. Brian was in, too, so I stayed out on the beach and set up my position so I could get a good shot while Brian went around the corner to get the Jeep. And I waited.

Until Brian ran back around the corner on foot, waving his arms in the air and shaking his head back and forth. Once he caught my eye, he put his hands down on his knees and I could tell from his dejected stance that the Jeep was stuck.

"It doesn't have 4 wheel drive, and I can't get it out!" he said to me.
"What? It doesn't have 4 wheel drive? That seems ridiculous!" I retorted. A Jeep without 4W drive was even a thing? I suddenly felt very misled by all the Jeep commercials I had seen in the past where Jeeps were scaling mountains and powering through streams. How could it not have 4W drive? And what was worse, I noted as I saw the pattern of the sand around the sunk tires, ours seemed to be only rear wheel drive.

So I started digging. And Brian followed. We dug and dug and dug and tried and tried again, but we were very stuck.  We attracted the help of a passer-by who pushed just as hard as Brian, but still the tires spun without progress. So I started tromping through the bushes to find some sticks or branches or rocks, or something that our tires could grab hold of (hadn't I seen that in the movies somewhere?), and started to build a little pathway of sticks for the back left tire. When the men saw me they started making one for the right tire, too.

That did the trick and we were eventually on our way with sand stuck underneath every single fingernail and dirty dust up to our knees and elbows. We didn't make it out onto the sandy beach for that picture, and I realized with regret as we drove away that I hadn't stopped to take even one picture through the whole ordeal. But I wanted something to remember our lame, rear-wheel drive Jeep so snapped this picture as we drove down the road. 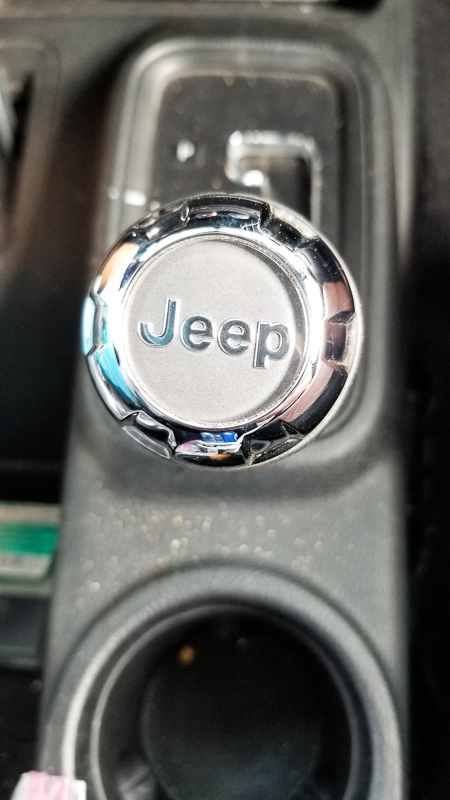 Later the next day, I hopped into the drivers seat and noticed another lever situated underneath the steering wheel down and to the right and, upon further investigation, saw that it was clearly marked:

I felt like the wife in that scene in Mrs. Doubtfire. "The whole time? The whole TIME? *through clenched teeth* THEWHOLETIME?" Turns out the Jeep wasn't lame after all, and it was probably laughing to itself while we were on our hands and knees digging it out of the sand.

After that adventure, we took a drive up Waimea canyon. 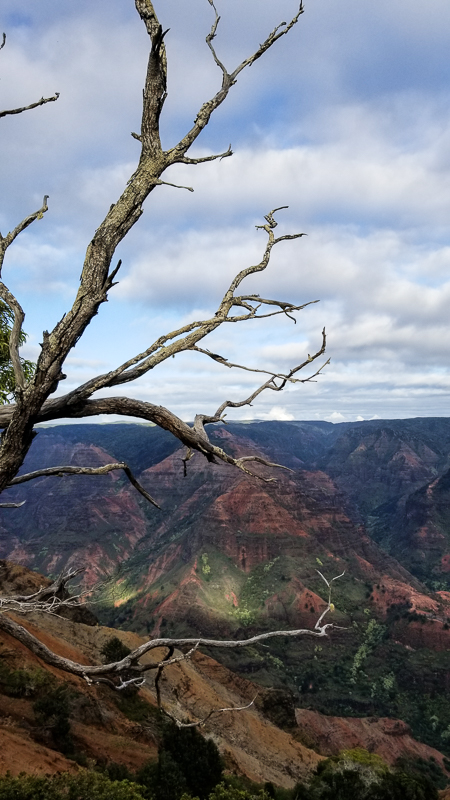 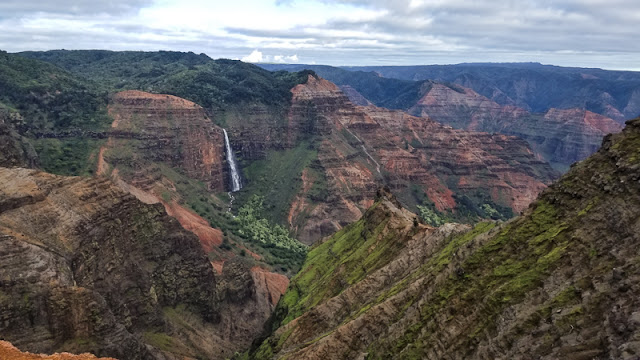 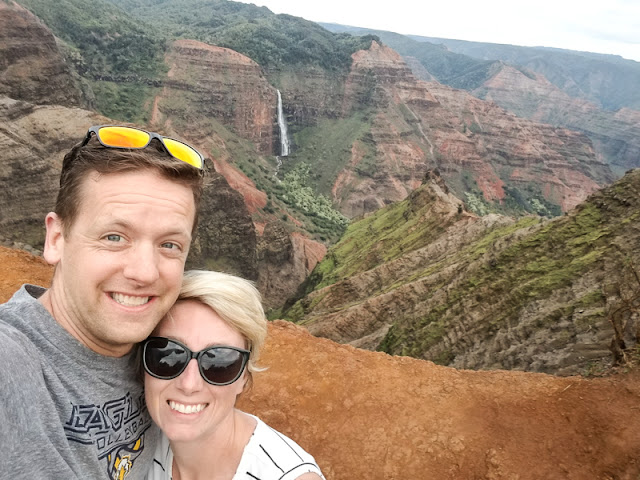 Until we reached the end of the drive, 5100 ft higher than our starting point, and I fully wished I had brought a jacket. But not even the cool air could keep me away from climbing the last few feet up into the sky to take in the view. 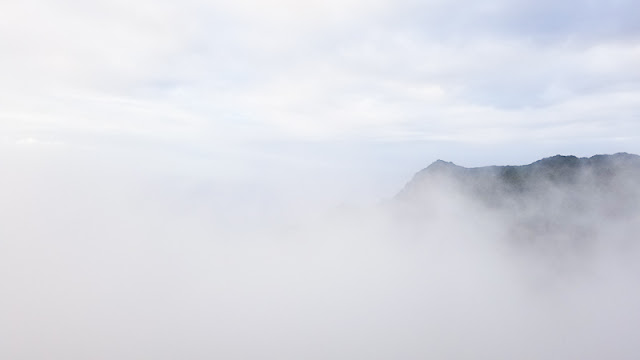 It might not seem like much, but take another look. We are literally standing above clouds, staring straight into the dense mists that make this area one of the wettest places on earth. In front of us are sheer cliffs that drop almost back to sea level into the canyon, and seeing it filled with clouds was quite amazing and surreal. It felt like we were literally at the edge of the earth. 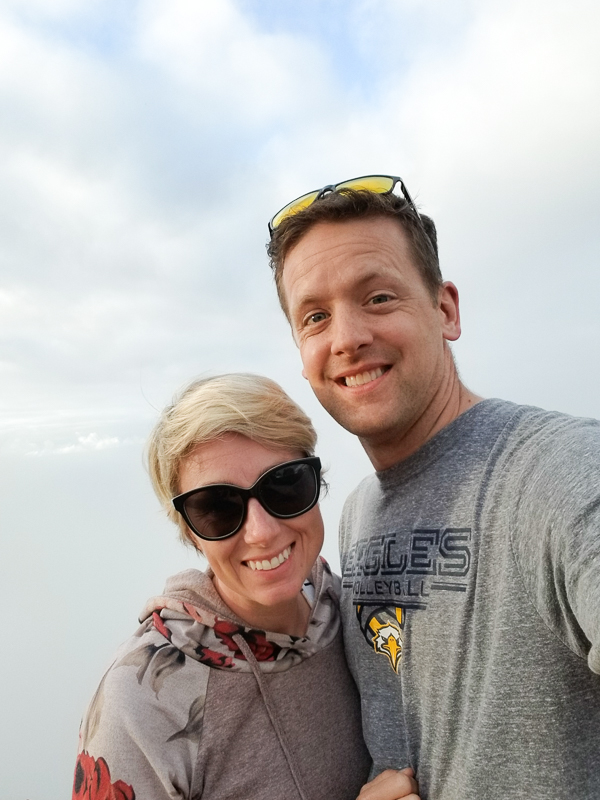 Brian kept staring over the edge of the cliff with his hands out to his sides saying, "Are you kidding me?" It was that good. 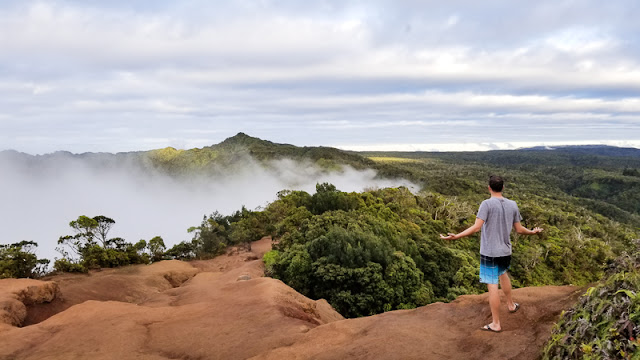 We almost couldn't even speak to each other because of how surreal the whole thing felt. If only you could get a sense of the thousands of feet of air that dropped off of that cliff and down into that cloud. 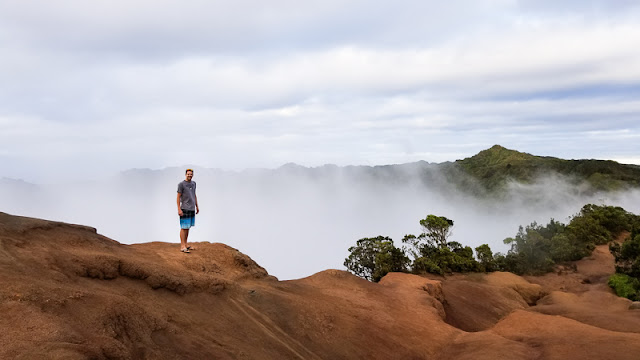 Friday was even more laid back. I watched the chickens and roosters strut along the resort pool area. 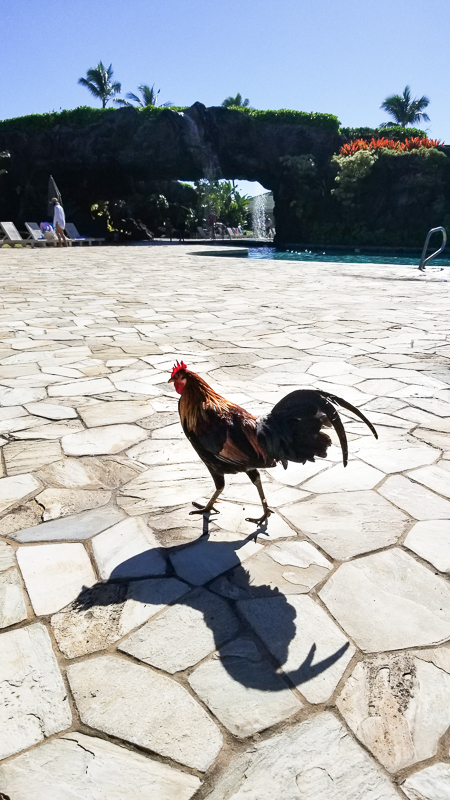 And then when Brian finished up with his conferences we decided to go for a walk along the beach. Brian hadn't been along the beach to the north of our resort, so we pointed our feet in that direction (him in his water shoes and me barefoot since the ocean carried off my water shoes a couple of days before). We found all sorts of treasure spots... giant fallen trees that had been carried through the ocean and pushed up onto the sand, slick with ocean water and covered in moss. Several fishermen with leather-tan skin setting up their poles in the sand, and one in snorkeling gear holding a spear in the water. Barriers of lava rock that we scaled and crossed. And this place: 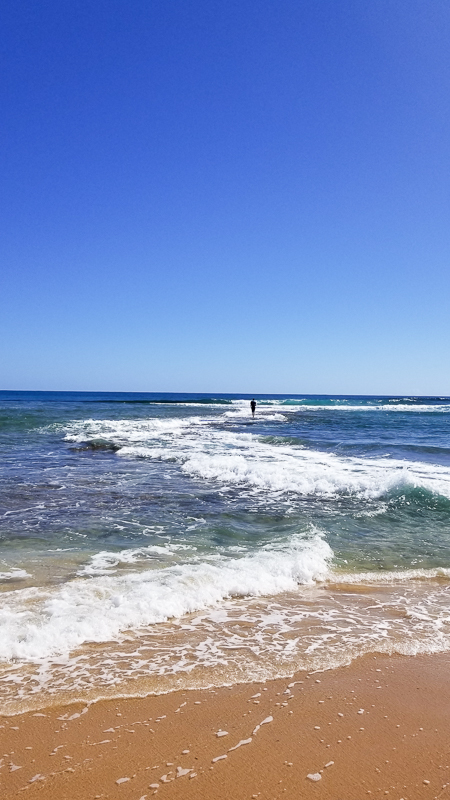 It felt magical and I wished my bare feet would have allowed for me to follow him out there. But I'm glad I stayed behind to snap a couple of pictures instead. 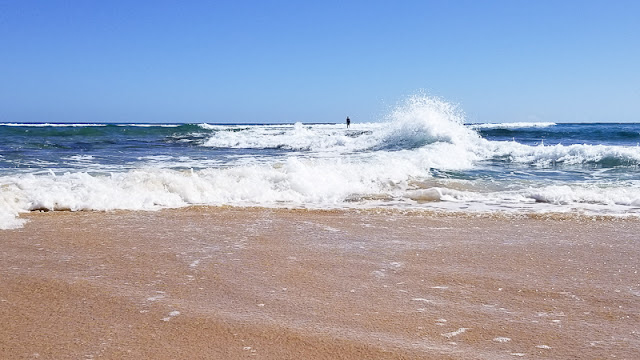 We passed a resort area with a water just perfect for swimming, so we jumped into the ocean and watched the colorful fish swimming around our feet and we climbed up onto the lava rocks that held the open ocean away and felt the spray of the waves wash over our faces. We hadn't brought towels along our walk, but it was comfortable enough to air-dry as we continued on.

We hadn't planned for such a long walk, and eventually we got hungry and knew we needed to reapply some sunscreen. But it was a little tricky because we were almost 4 miles away from our resort by this time and Street Burger wouldn't feed me without shoes. So Brian happily ran an extra mile and a half round trip to buy some cheap flips (and sunscreen) at the nearest grocery store while I sat on the grass with the chickens waiting for his return. 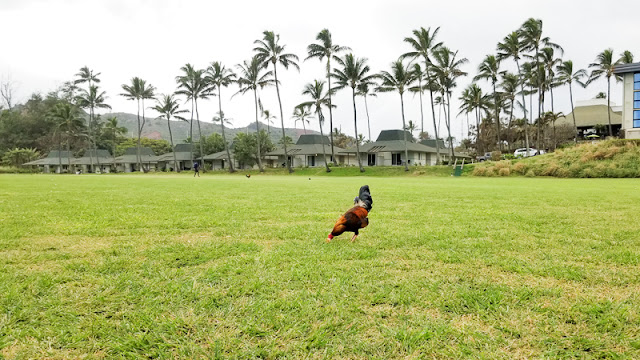 The burgers were worth the extra hassle. 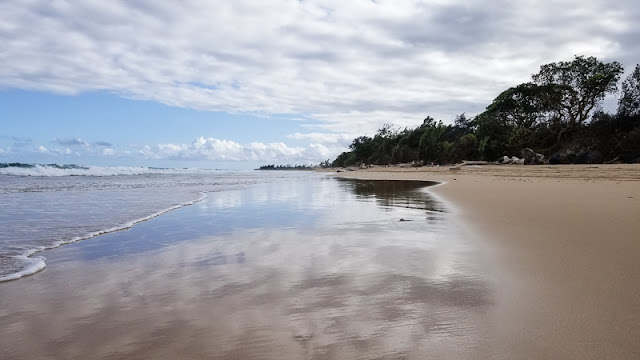 By Friday night we were both ready to go home. The beauty of Hawaii had filled me. We saw so much life, so much movement, felt so much adventure, and so much peace. I always love being a part of it. But it can't compare with our children, and we missed them.

But we'll be back. Maybe one of the most beautiful truths is that the beauty of the islands exist every day. So I will carry this full heart back and use it while I walk through my desert life, and then when it's all used up I'll hop back on a plane to fill it again. Every day, every hour, every minute, wave after wave breaks along the shoreline, rain falls in the forests, waterfalls drop down mountains, seagulls and pelicans dive for fish, whales spout, dolphins jump, and sand pulls out from under feet. Somehow just knowing that is comforting. It's always there, and always ready for me to visit and to fill my heart with it's magic again.
posted at 10:29 AM