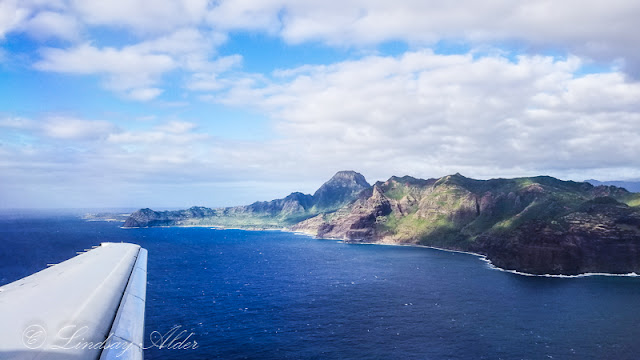 Brian had an ophthalmology conference in Kauai this year. Naturally, he needed a companion so I kindly volunteered to accompany him because... Kauai. And ocean. And the color green.

After landing in Honolulu we paced the airport (and napped (and ate (and talked (do you know how much conversational ground you can cover when you're uninterrupted?!)))) for a few hours, and then we boarded another small plane that would take us on over to Kauai. And just after we sat and just as the plane was slowly rolling away from its terminal, Brian turned to me with panic on his face, hands on top of his pockets and said, "Linds! Do you have my phone?!"

I did not. Neither did his shoulder bag or his sweater pockets or his pants pockets or the seat pocket in front of him. We crossed our fingers that it was in his carry-on stowed above our heads, but realistically knew that the chances of that were slim.

But there wasn't much we could do about it right then, so we said a couple of silent prayers and shrugged our shoulders and hoped that everything would work out with as little headache as possible. 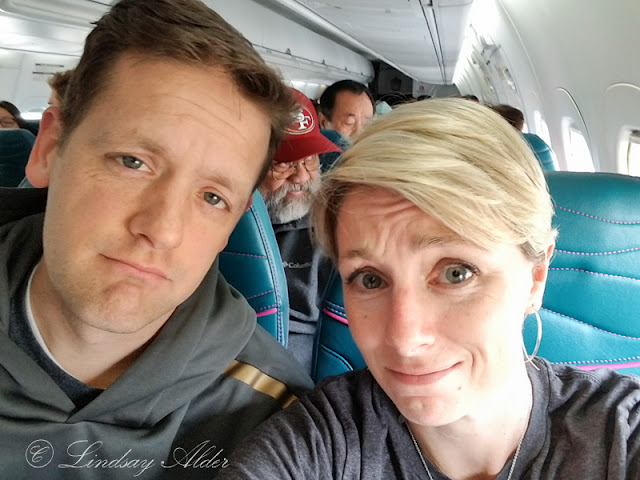 Those are our worried faces. This picture did help me notice the Santa Clause seated right behind us though, so I decided to take that as a good omen. We landed an hour later, checked the carry on (no phone), and before we deplaned I had the distinct impression to call Brian's phone. This made me slightly nervous because I don't actually like making phone calls... even something as simple as setting up a doctor appointment or ordering pizza will elevate my heart rate. But, it felt like a push and I had said a prayer, sooooo......

The ring was answered.
"Hello. Hello. This is a lost phone," the woman on the other end answered.
"Hi, yes... it's our lost phone I'm afraid," I said. Turns out that Brian had left it on his seat in the airport and it had been handed in to one of the gate agents who was now using it to talk to me. Through a bit of confusion and several comments such as, "...well, this isn't the way we normally do things..." they agreed to send it with a flight attendant on the next plane, leaving in 20 minutes. We were instructed to stay within the secure area and to meet Jason the flight attendant at Gate 3 at 10:51am. We thanked her profusely, sat in the hallway and decided to believe that everything was going to go according to plans.

It did. And two hours later we were sliding into our rented Jeep with both of our phones in our pockets.

We had a few hours to kill before we could check into our hotel. Which wouldn't have been a problem except that Brian (unsurprisingly) had not slept on the red-eye flight at all and was in desperate need of a nap. Which wouldn't have been a problem except that it was cold and drizzly and windy... so napping on a pool chair didn't seem very ideal. We went to lunch at a beautiful beach side cafe and then tried huddling in our sweatshirts and lounging on the chairs by the poolside, but it was pretty uncomfortable and, even though I'd propped a t-shirt up as a little tent, my book was still getting wet.

Eventually our room was ready, even a little earlier than check-in, and we jumped at the chance to go get a couple of hours of decent sleep and a good shower.

When we were feeling a bit more refreshed, we took a long walk up and down the beach behind our resort. It was, of course, so very beautiful. 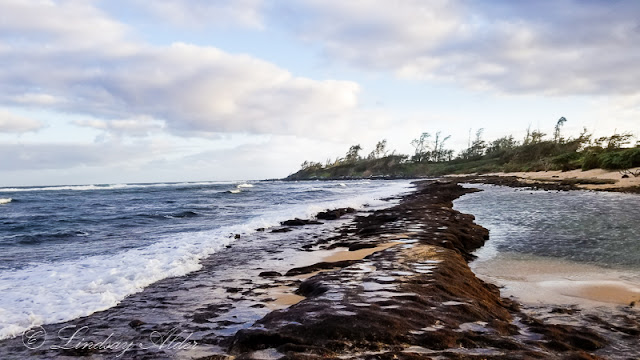 I do appreciate a nice sandy beach, but my heart belongs to the rocky ones. I think that's why I love Kauai so much. 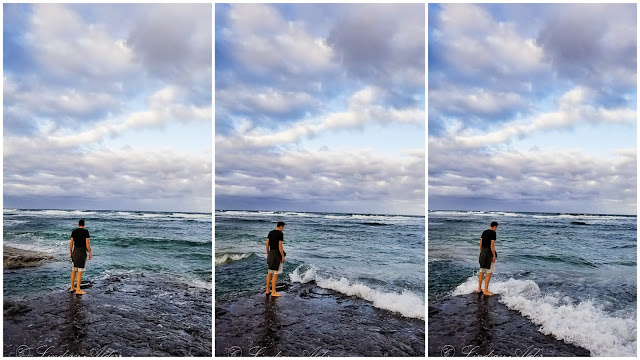 It was still drizzling off and on and quite windy and I wouldn't call it 'warm', but we had the beach all to ourselves. 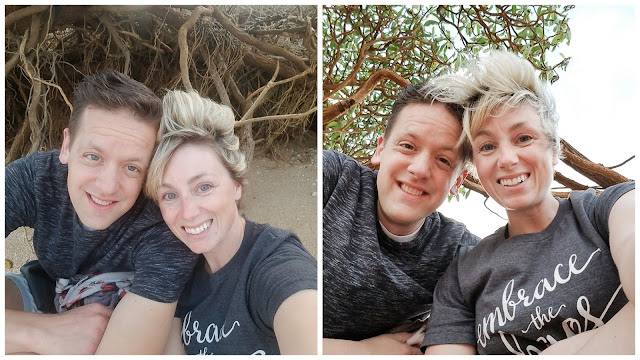 There's almost nothing I love more than sunset hours on the beach. Genuinely. 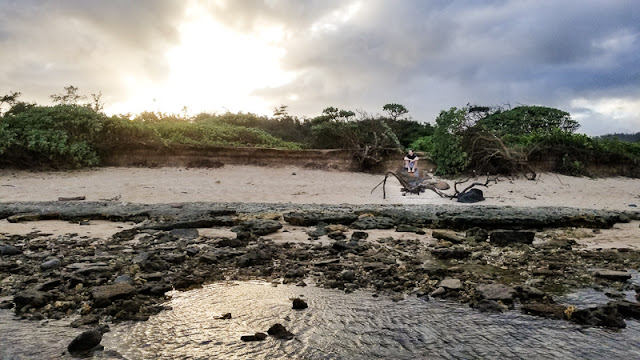 And we made it a point to be outside during the sunset every day that week, making the most of it. 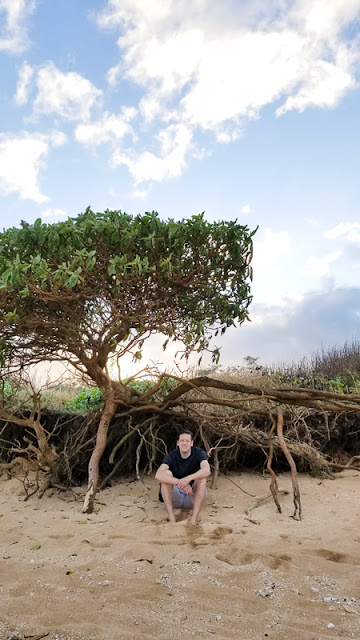 The next day was Sunday, so we got all dressed up and drove to a cute little church house. 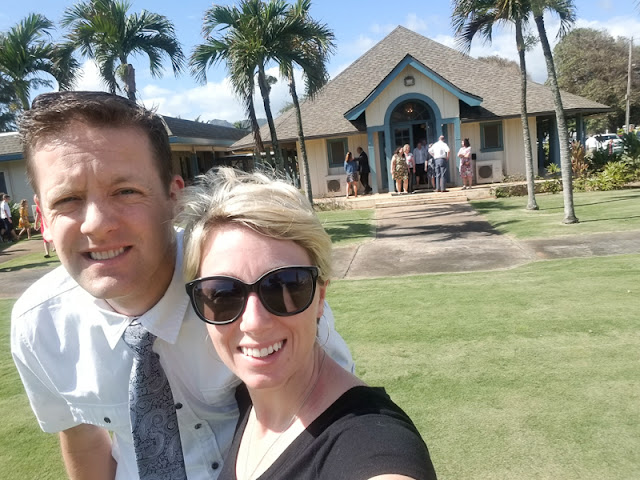 It was packed so full and I wondered how many visitors that ward sees in a given week. The atmosphere was relaxed and fun and it reminded me a little bit of our ward/branch in Miami. I absolutely love watching other people live the gospel of Jesus Christ in different ways than I do. It helps me remember that the Lord's love covers so many different kinds of people... he truly must celebrate our uniqueness.

After church we put on our swimming suits and drove to Ke'e beach, which is the beginning of the Napali coastline, and started hiking along the Kalalau trail. We also started experimenting with our new GoPro. (It's actually not new. It's a year old, but I've never used it because I couldn't figure it out without sitting down to really figure it out and I never felt like it was a priority. I'm so glad we figured it out for this trip!) 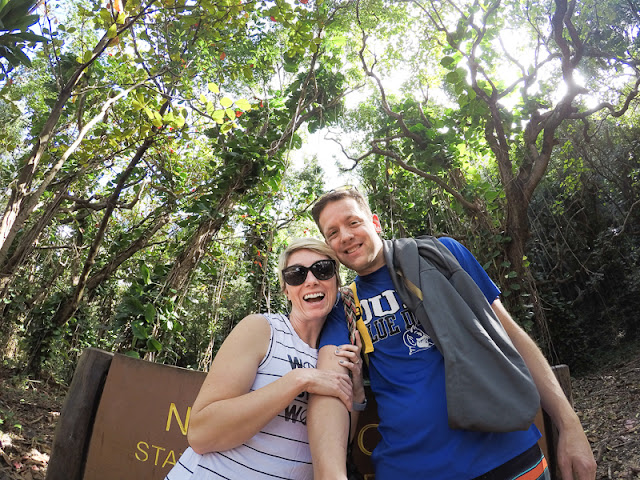 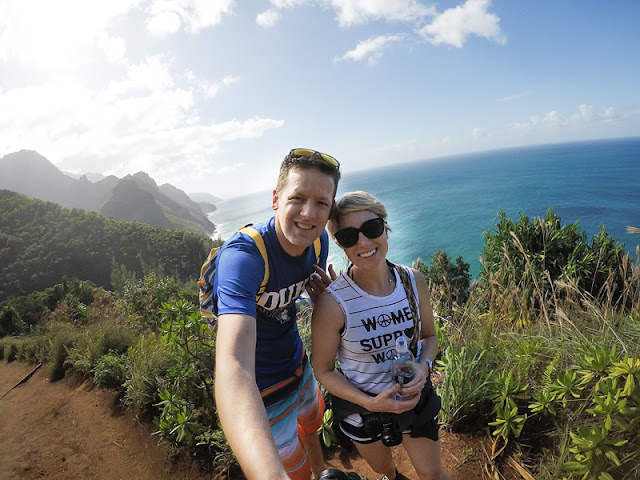 At the end of the short 2-mile hike we arrived at the beautiful Hanakapi'ai Beach with green covered mossy rocks and a cold(ish) river that dumped into the warm(ish) ocean. We played all along the riverside and waded through the thigh-deep waters and then sat on a towel we had brought and pulled out our lunches next to a small cave that was (obviously) begging for Brian to climb into. 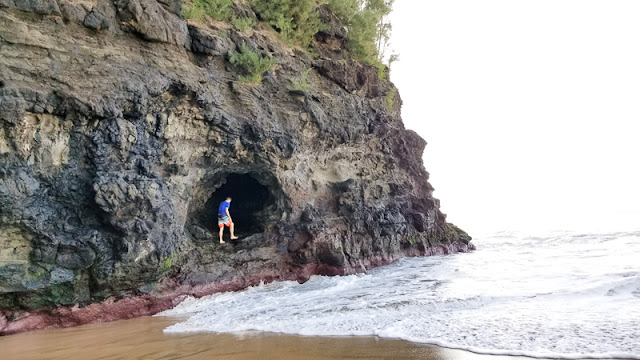 We learned that we could keep going another two miles up the mountain and that if we did we'd end up at a waterfall... which is my love language... and wished we had reserved enough daylight to get there and back again. That's first on my list for Next Time. As it was, we arrived back at Ke'e Beach with the perfect amount of sunset light still left in the sky and then happened to stumble across a rope swing that entertained us for a while. 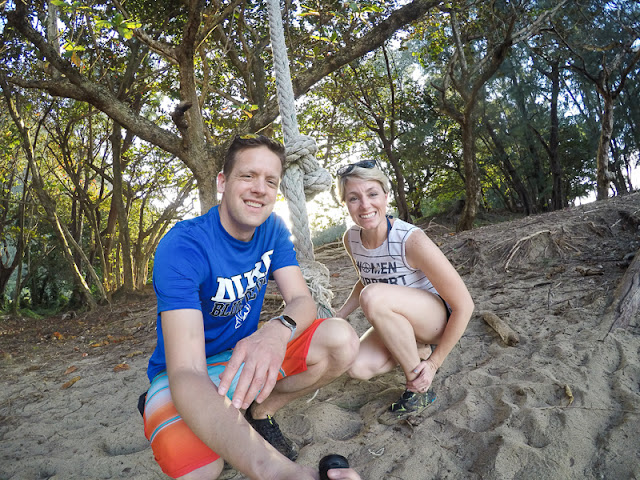 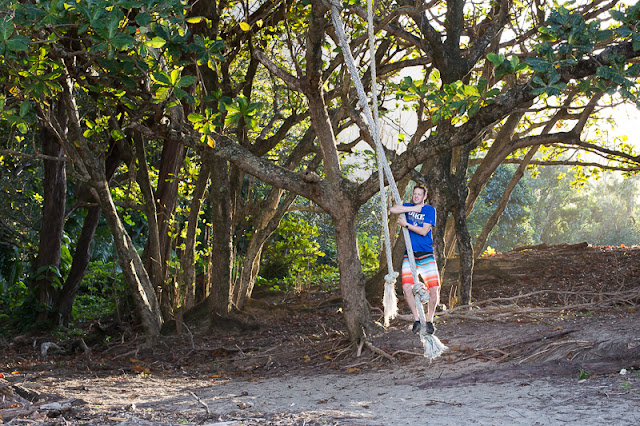 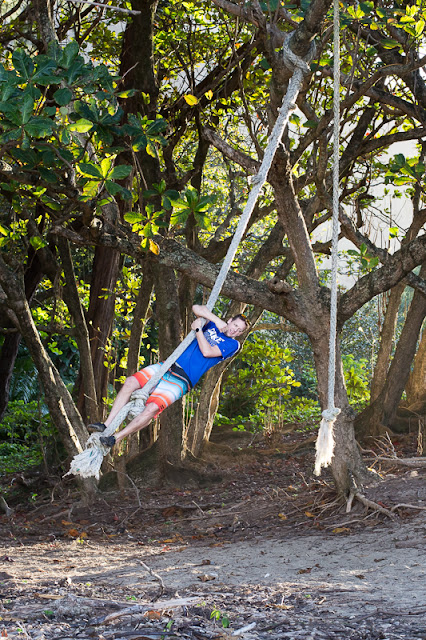 I know you were all wishing to see me up there on that swing, but sadly, no photographic evidence exists. We do have a video of it, though... and you can take my word for it that I look pretty awesome. 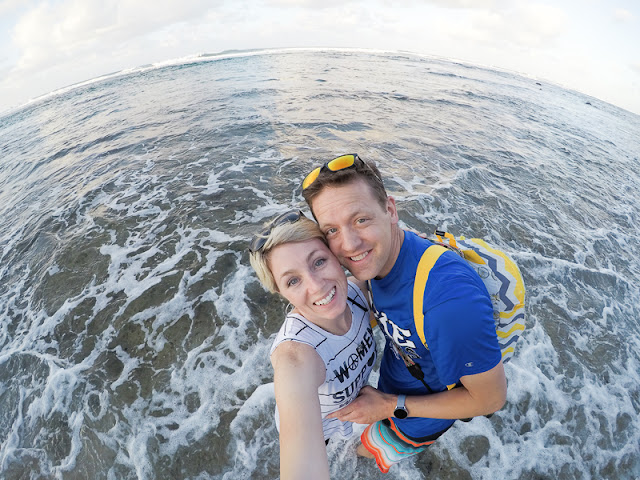 We sat on the beach and walked along the sand and waded in the surf and played on the rope swing until the sun went down and the temperature got cold enough for us to find our way back to the Jeep. A beautiful Sunday.
posted at 7:22 PM