For Timothy's experience gift this year we got him a date night, with me, to Color Me Mine so he could pick out any ceramic piece he wanted, slather it with paint, and display it on the shelf above his bed. He was polite about the gift as he opened it and said all the appropriate thank-yous, but it wasn't hard to see that he was a little underwhelmed.

I was surprised because I was under the assumption that he loved painting. When we went to Aspen Grove over the summer, for example, he wanted to hang out at the art cabin and paint through every spare minute he had.

Well, he grew out of that love, apparently.

Which wasn't a big deal because one of the greatest things about experience gifts is that they are quite returnable. Especially if you never actually purchase the tickets before you give them. Which we don't because we're lazy. So the biggest hassle was throwing away the original piece of paper that promised an evening at Color Me Mine, and then going through a little brainstorm of ideas with him guiding the way.

Within two minutes we had landed on Shark Reef. 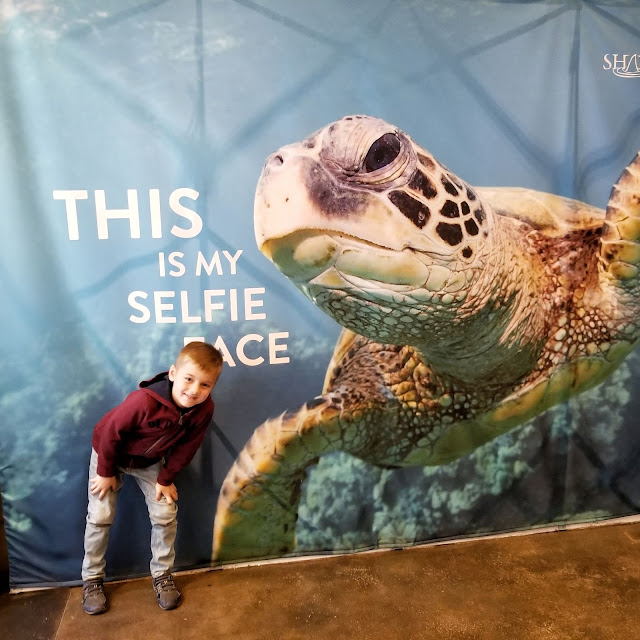 With mom AND dad. 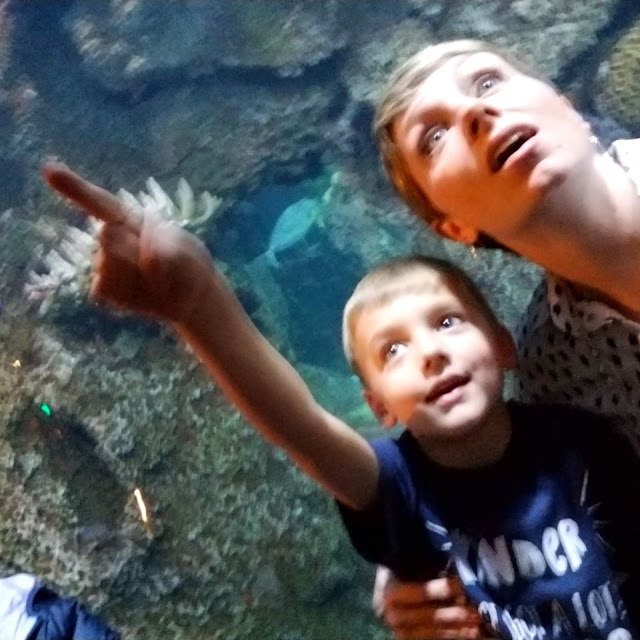 Though, we ended up losing Dad for little pockets of time here and there because as we walked past the piranha tank he overheard that they were possibly going to be dumping a bucket of ill-fated goldfish into the carnivorous fishs' tank sometime that afternoon, and that was something Brian did not want to miss.

I didn't mind missing that, however, because I didn't want to have to work through sad feelings for the goldfish, so it worked out perfectly that I would follow Timothy around to all the tanks and exhibits while Brian bounced back and forth in his quest. Fortunately, Shark Reef is quite small so it was easy for him to slip away and come back without Timothy noticing much at all. Unfortunately the bucket of goldfish never arrived, so all his bouncing back and forth was for naught (which I suppose was a fortunately for the goldfish). 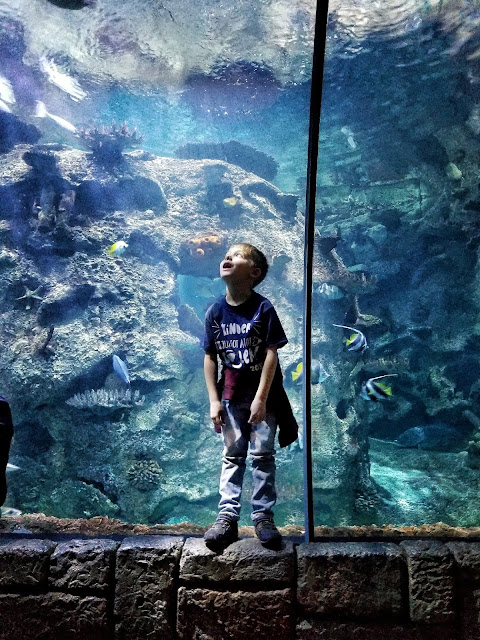 Shark Reef is basically an aquarium with a heavy emphasis on sharks. And, despite my fear of sharks in the wild, I don't seem to have any fear of sharks behind glass... so that's good. 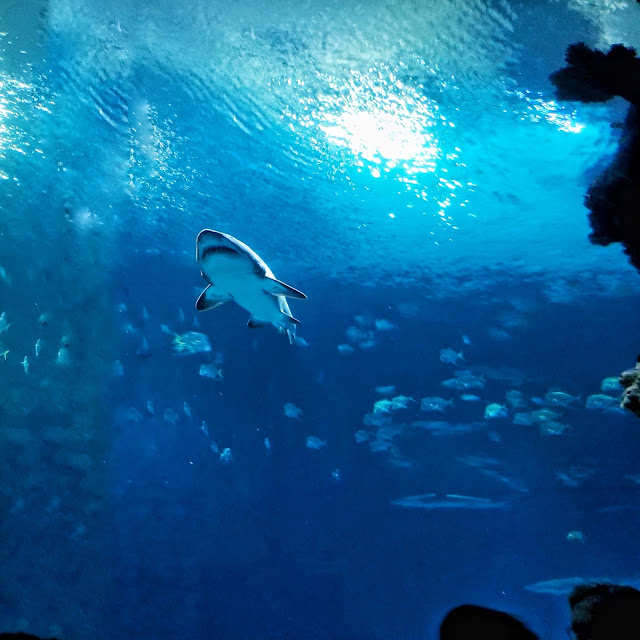 Timothy had the same reaction to the sea jellies that I have to the sea jellies. (Interesting fact: Jellyfish are not 'fish', which is prompting the recent movement of calling them sea jellies. So I feel rather forward thinking here.) He stood at their tank and watched them glide and float through the water almost as long as he stood at the shark tank, which is saying something since the shark tank was about 4 million times larger. 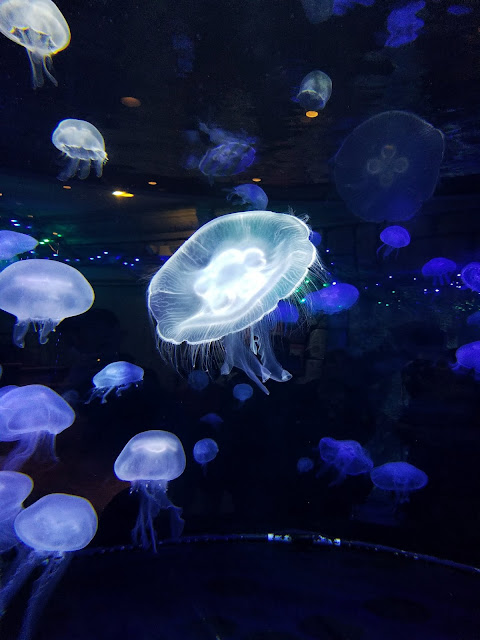 I asked Timothy at the end of the date which sea creature he would be if he could choose any of them and he said he'd be the saw-tooth shark "because it looked so, so cool." It was also very hard to get a picture of the saw-tooth and the shark. Here's the best one, but it's too bad you can't see the full saw-tooth. 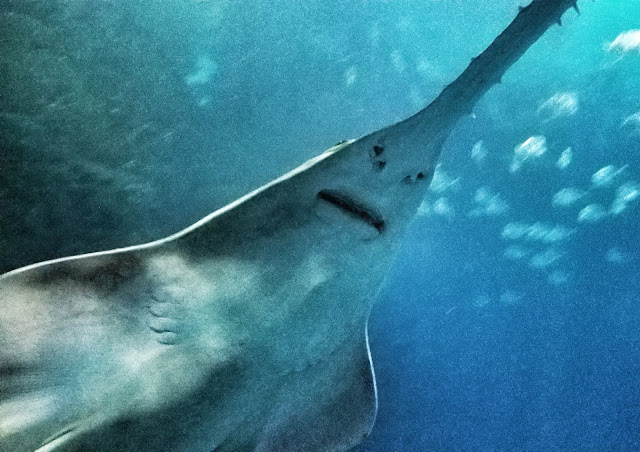 If I were asked the same question about which sea creature I would be (which I wasn't) this angelfish might have been a strong contender: 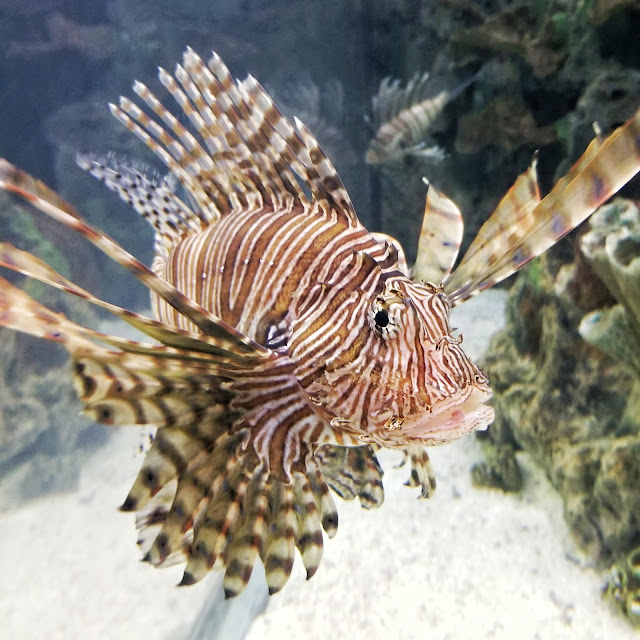 Though I suppose it would depend on whether those pretty little feathery extensions would get in the way of a comfortable life. Would they snag on all the coral? Would they flap in my face if I swam through a strong current? I did chop all of my hair off... so maybe I wouldn't want to be this angelfish after all.

Once we were done in the aquarium, we got a free pass to check out a new, temporary exhibit called A Polar Journey which ended up being quite the fun, interactive adventure. For example, you could sit in this little pod and watch giant plastic penguins (like 3-feet tall) walk around you while you listened to fun facts about the poles of our earth. I didn't get a picture of the penguins, but I did have to dodge them and watch out for them so they wouldn't run into me while taking this picture. 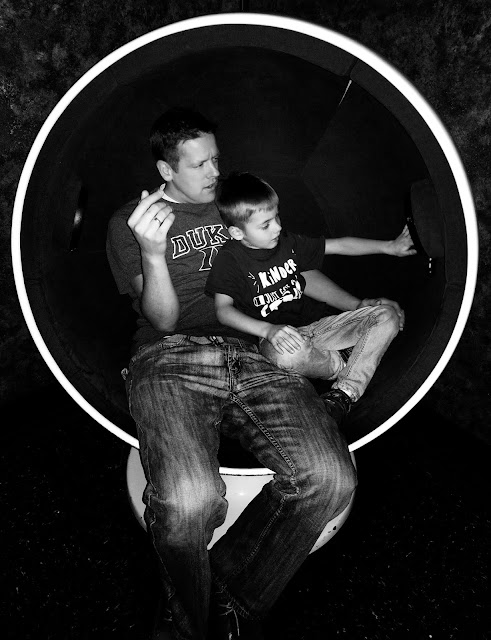 Next up was a rather clever hallway designed to test our nimble-footedness. The ice blocks moved slowly downstream, and if you jumped onto one it would start to crack and sink underneath your feet (not for reals, of course... it was all done with lights and who knows what else), so it was important to be quick and light while jumping from ice chunk to ice chunk or you would at least, get wet and at most, sink. Timothy and I hopped along this icy stream for the better part of half an hour as Brian held our place in line to see a short film. We were quite good, if I do say so myself. 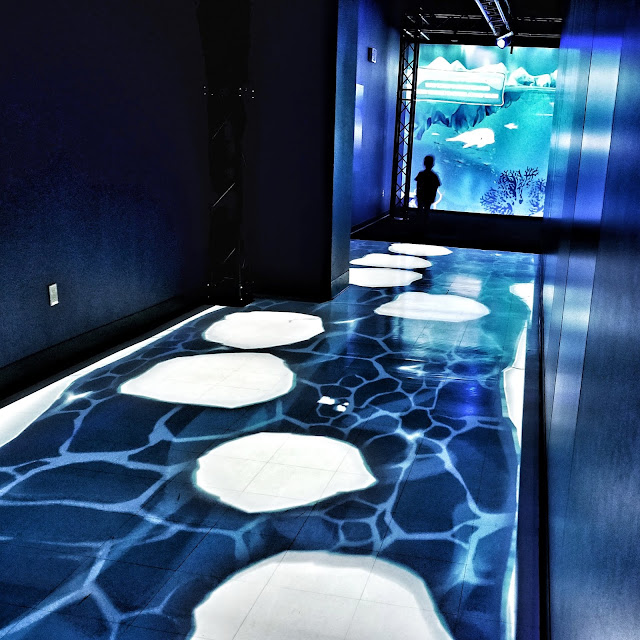 We also spent some of the waiting-for-our-turn time saying hello to these polar bears who, by the look of them, were saying hello right back to us. 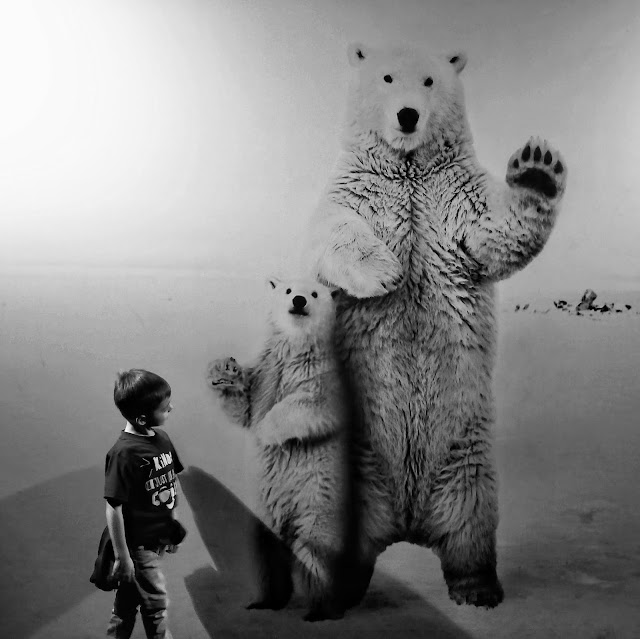 On our way out I asked Timothy to pose for one more picture next to the selfie turtle because I wasn't entirely happy with the way his head was blocking some of the words in the first picture at the beginning of this post. He was happy to oblige, it seemed, but his bored face betrayed him as every picture had the forced smile of someone who was being asked to smile against his will. So this will have to do. 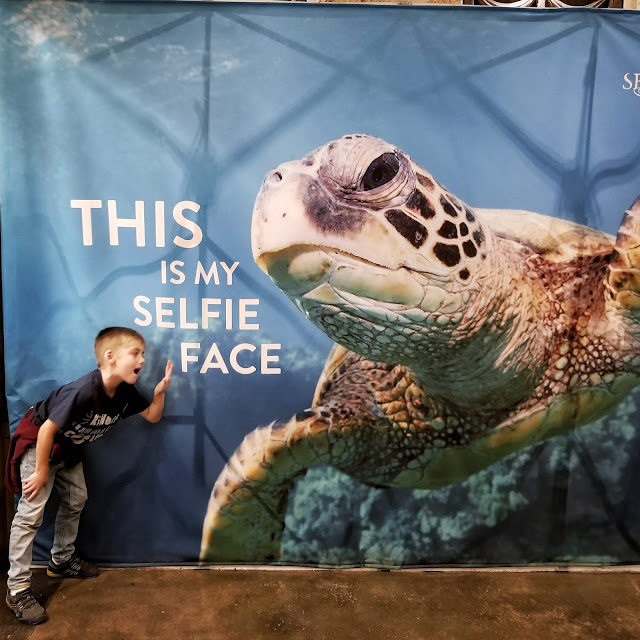 The next phase of our date took us to Timothy's favorite restaurant, Zupas, but before we walked inside and as we walked through the parking lot we found ourselves walking in front of a Smashburger which caught Brian's eye.

"Oh, that looks good," he said out loud but mostly to himself, and then turning to Timothy he said, "Hey TK... are you sure you don't want a burger bud?! Burgers are so awesome, and this place looks reeeeeeeally good."

"Okay, cool. Yep. Your date. Your choice. Zupas is great," he said out loud but mostly to himself.

I raised my eyebrow and smiled a half smile at Brian as we continued walking past the burger place, its vents pumping burger smell straight into his nostrils, and I watched his head turn as we passed its door.  "Bri," I said, "why don't you go on into Smashburger, get yourself something there and then meet us at Zupas in a few minutes." Happiness.

As Timothy and I left Brian walking through the Smashburger door and opened Zupas for ourselves Timothy turned to me and said, "Hey mom, great job thinking win-win!"

Ice cream was last, and we found this charming little place right next to Zupas (and Smash burger) who served the most delightful mint-chocolate concrete, and who was more than happy to smother Timothy's vanilla ice cream cone in rainbow sprinkles. 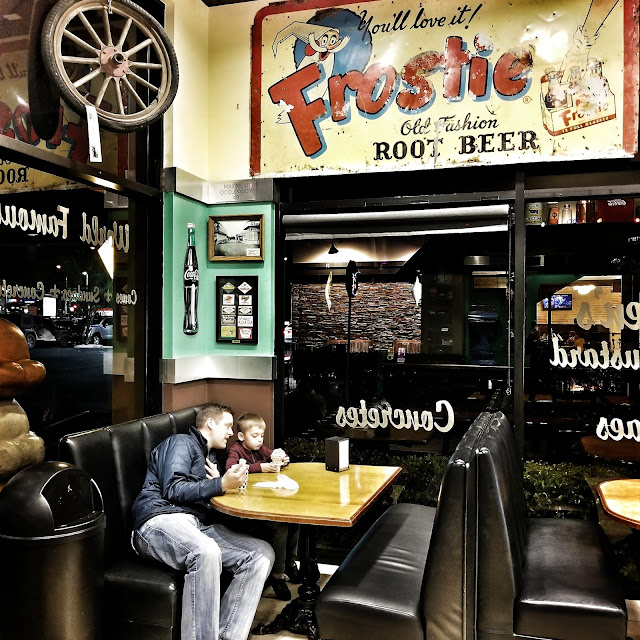 Timothy was right... sharks, soups, and sprinkles were way better than ceramics.
posted at 2:50 PM