Bringing in the new year 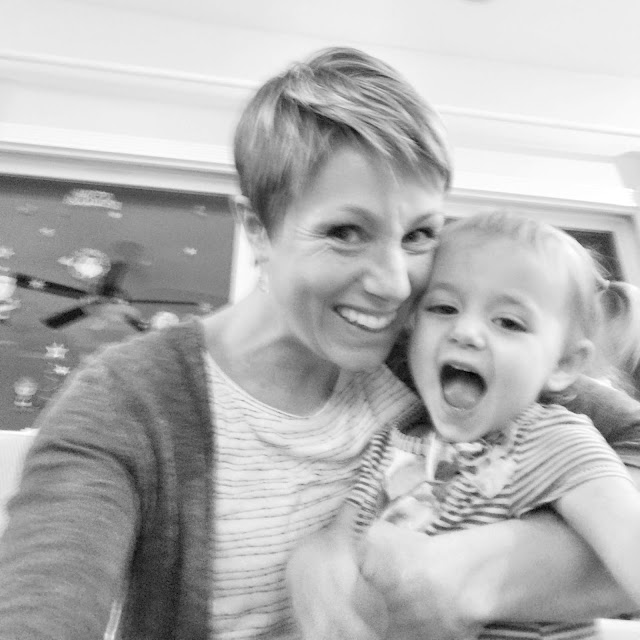 It's a fuzzy one, I know. But just look at that smile! This little girl brings energy into everything she does and can you just imagine what a New Year's Eve party would be like without an extra spark of energy? We let that little ball of energy stay up alllllllll the way until 8:00pm - an hour past her usual bedtime - and then we kissed that little spunk and put her to bed so we could all enjoy a little less Eliza energy.

You can't have Eliza energy around, for example, when you're trying to play a game of Exploding Kittens. 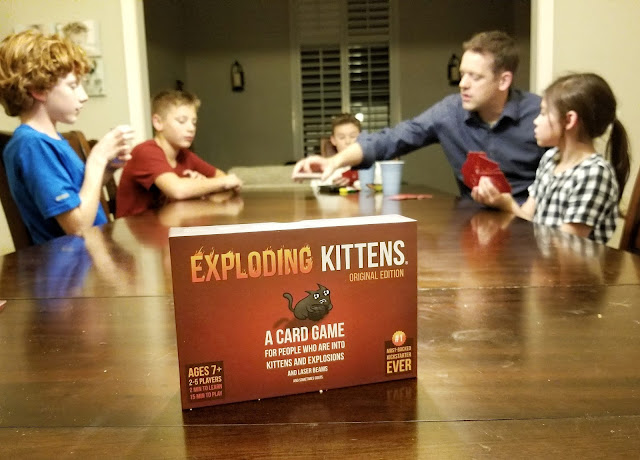 And we played lots and lots (and lots) of games of Exploding Kittens during the last hours of 2018.

But first up on our list of games was Mario Kart. 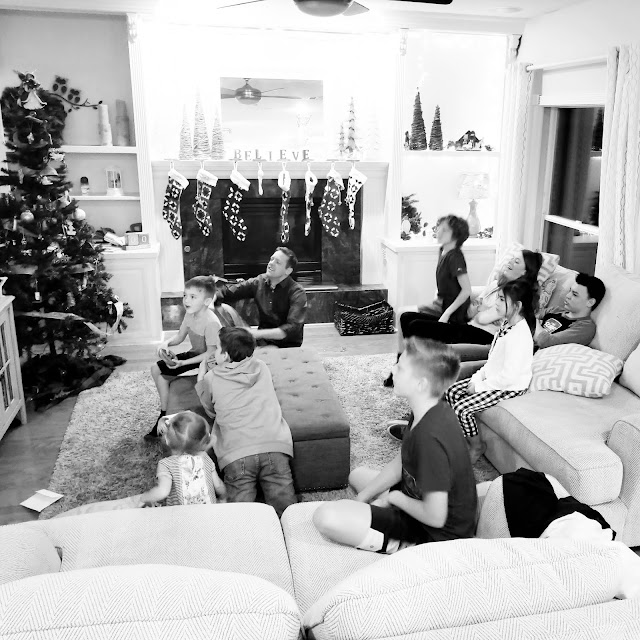 We had 10 people bouncing up and down for two hours, shouting and cheering for their little colorful racers on the screen. I was impressed that everyone had such a great time for so long given that we only have two remotes.

Three of the children pictured above are from the Yates family... and can we actually pause for a minute here to talk about the Yates family? I adore every one of them. Melissa and Tony moved in over the summer with their eight children and we have become fast friends. Melissa and I speak the same heart language - a language of ideas and feelings and doctrine and philosophy (a language many are not comfortable speaking as I have discovered through much embarrassment over the years) - and she has sunk into my heart like a magnet. Carson and Porter are the same age and fell into fast friendship, and Ellie and Miles are the same age and I could write a whole post about their tender, beautiful friendship. So as New Years Eve evening was approaching it was no surprise that Carson and Miles asked if the Yates could come over.

Somewhere in the shuffling of children, I realized that their teenage son, Kimball, might have nowhere to go for the night, so I mentioned that he was more than welcome to come hang out with McKenzie and the rest of the family as well, if that didn't feel too awkward for him (I'm still new to this whole teenage boy/girl thing).

He jumped at the chance and it was delightful for me to watch McKenzie slide into a completely comfortable friendship at his side.

As the night wore on, we ate pizza, played games, lost the teenagers to a different party, put Eliza and eventually Timothy to bed, and were left with these four who were more than enough to help bring our new year in with laughter and fun. 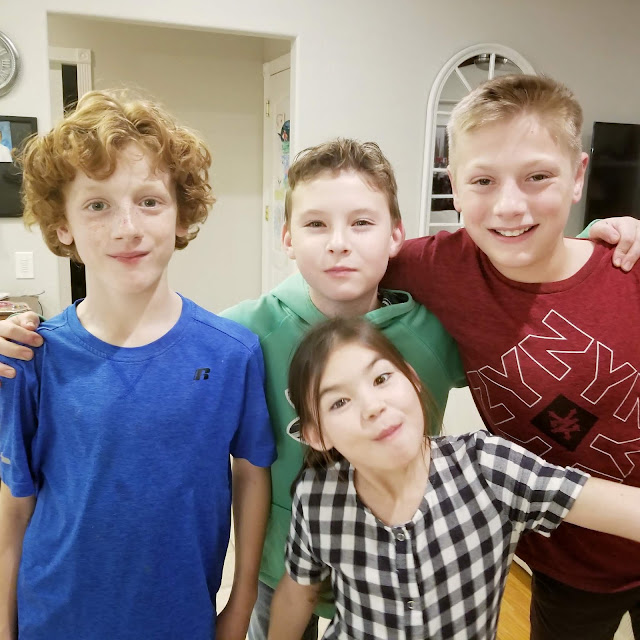 We played more games, watched a movie (Black Panther) and then had just enough time as the credits rolled on the screen to get our noise makers and poppers ready to go and count down from 10. 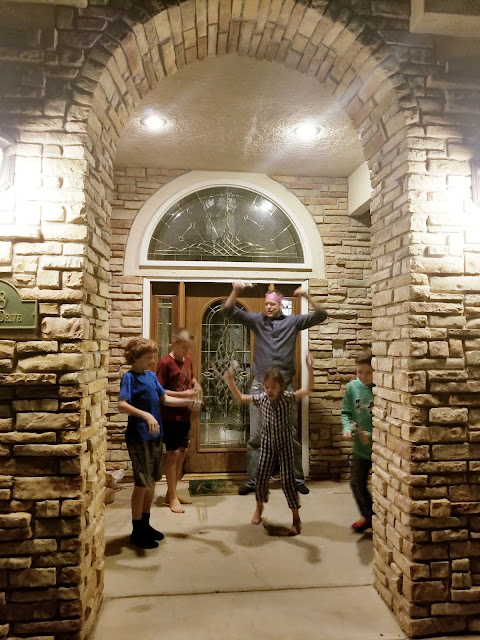 2018 was a year of ups and downs (as are all years, of course), and much of my year was spent wrestling demons in my head. At most points throughout the year, if you got me to a place of pure honesty, I probably would have told you that "things are a little rough right now". But you probably wouldn't have seen it on the surface. Isn't life funny that way? 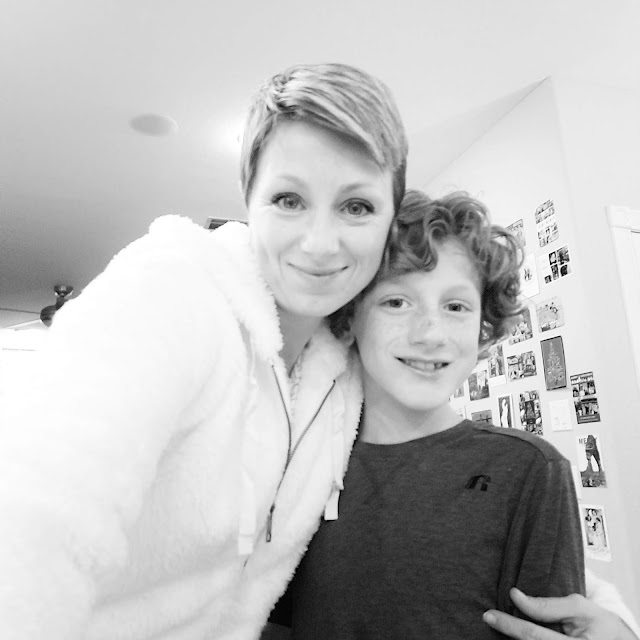 I've spent a whole lot of time with pen and paper analyzing my year, pulling hundreds of isolated emotions, thoughts, and single events from the days of the calendar and working them together like puzzle pieces to reveal a greater picture of what my 2018 was really like. When I started this work, I worried I would find that the finished picture would be one of discouragement and loneliness and failure because all of my pieces seemed to be filled with negative emotions. But as I worked through the hours I found quite the opposite and ended up in tears because all of those hard pieces, when pieced together and looked at as a whole, ended up creating something beautiful.

2018 was a year of incredible personal growth for me. According to my own memory, it's been the largest personal growth spurt I've ever had within a 12 month period of time. Compared to myself at the beginning of this year I feel so much stronger - but I had to swim through some pretty murky rivers of my own weaknesses to get here. I am so much more confident in my gifts and talents - but had to climb over some pretty craggy mountains of my own insecurities to get here. I am more grateful for my home and my city and my state - but had to cut through some pretty dense forests of jealousy to get here. I've learned just how powerful my thoughts are, that they are creating all of the feelings and actions in my life and I'm learning how to harness them and use their power for good. And all within one year. One hard, beautiful year. (Though, let's be honest... I didn't recognize it was beautiful until the end of it.)

Also, I think it's important for me to point out that reaching this point of recognition and understanding happened to correlate right along with Brian's new bishopric calling. If you had been reading my journal in early November you would know that I was quite terrified when he received the call because I knew I wasn't in a very healthy emotional place (I was still navigating through those rivers, mountains and forests, you see (without knowing where I was going (or how much further I had to go (or whether I had gotten stuck and was going around in circles)))). Either Heavenly Father knew that I was almost here and would arrive before the weight of Brian's calling started feeling heavier, or He opened up a shortcut and showed me the way out. Either way I'm grateful to have Him on my team, sculpting me and looking out for me, cheering for me, and helping me take another step closer to who He knows I can be.

Anyway - all that rambling just to say that someday when I'm old and grey and looking back on the course of my life, this year is going to stand apart from the rest as a year of transition. And I love that I can see that right now... generally I haven't recognized those years of transition until they are long gone and I'm looking at them through a lens of perspective. But this time I know it now. I knew it through the middle of it even. My life has changed this year. I don't know exactly where I'm going, but I know God has a plan for me and that He has used this year to get me pointed in the right direction.