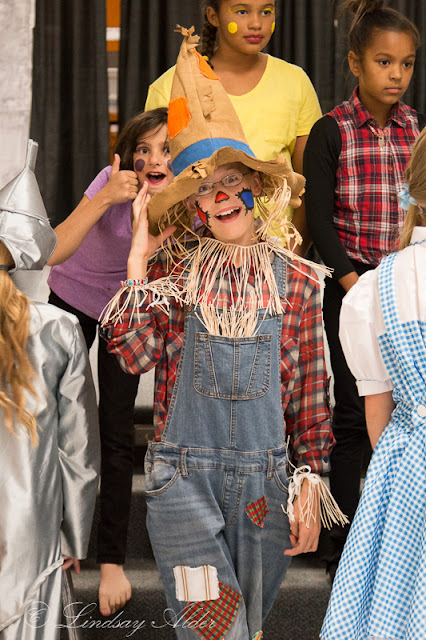 "Mama! Mama! They're doing a drama club at school and I really want to do it!" 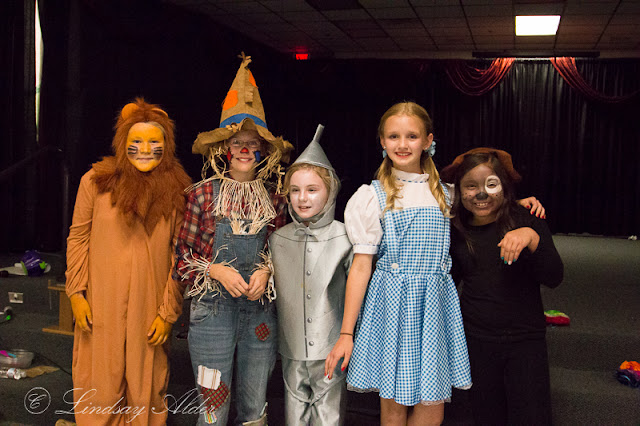 So that is how we ended up with front row tickets to the elementary school's production of The Wizard of Oz. 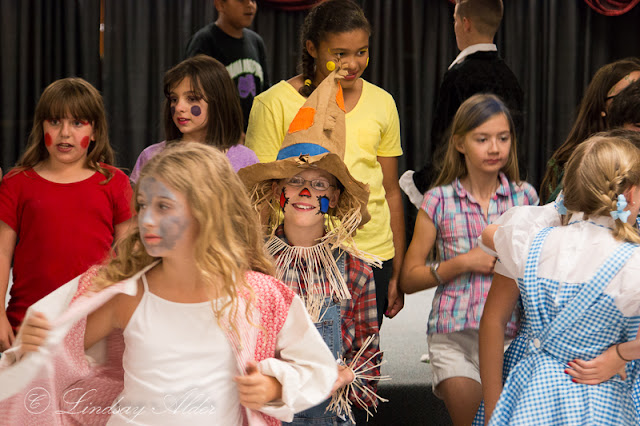 She was so incredible.  Really, truly!  She was!  I mean, really, I knew she would be because she's McKenzie and is really great in almost everything... but she surprised me with just how incredible she was.  Can you guess her character? 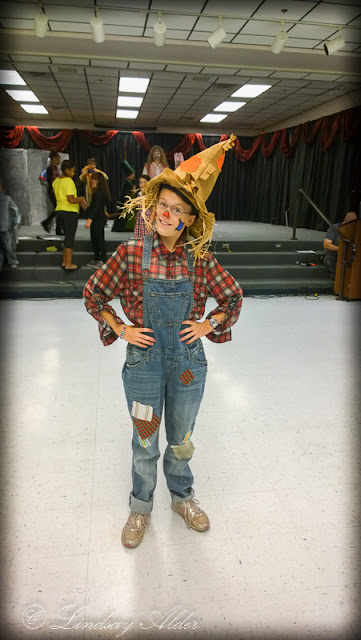 She danced around on that stage like she owned the place and got some pretty hearty laughs in the process.  Her solo was absolutely delightful to watch... which was a good thing because after having the blasted thing stuck on repeat in our brains for more than a month, I worried that that would not be the case. 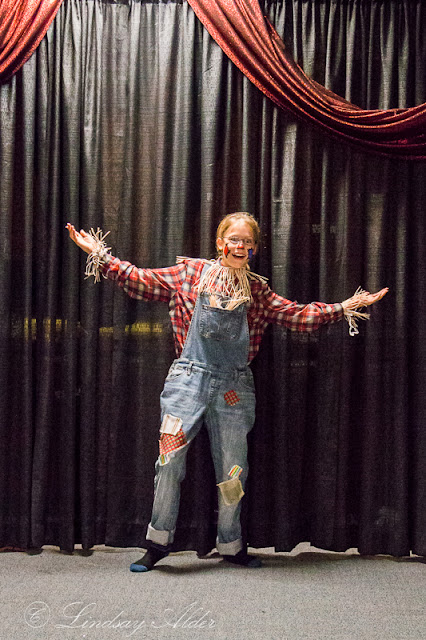 While she was choreographing the dance one night to her solo (all by her little 5th grade self), she mentioned to me that she was going to slide on her knees with jazz hands splayed at the end of the song.  In my head I thought it was a bad idea because it seemed a little too dramatic.  So I tried to talk her out of it.  But she would not be swayed. 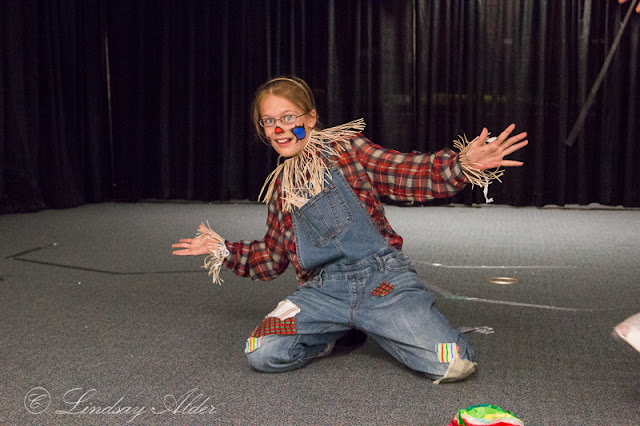 And she was entirely right.  That was one of the best parts of the whole show and caught the audience by just enough surprise that they laughed - - - every time. 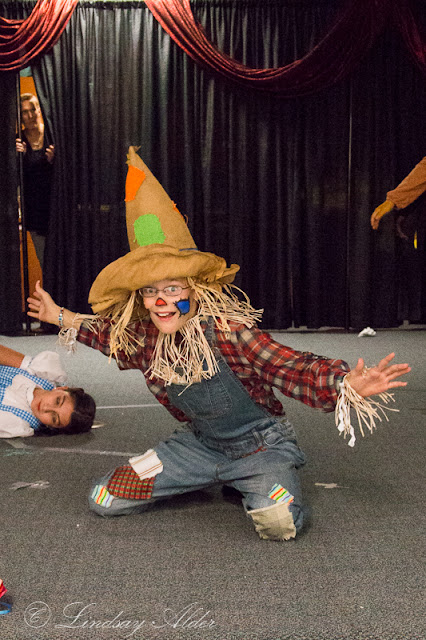 There was something about watching her up there... she seemed so grown-up.  I watched her through the months of practice work on her own to develop this character.  She invested a lot of herself into it, and it meant something to her.  So, then, to see her up there feeling accomplished and proud of herself was one of the best parenting moments I've had yet.  She felt so successful.  She was successful - - - and it made my heart almost break with happiness. 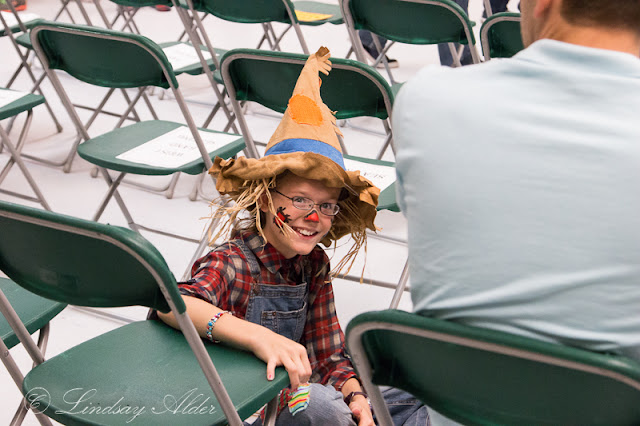 Grandma flew down just to see her.  She always wanted a theatrical or musical family... but her own kids were much more passionate about sports.  So she has a lot of hope in McKenzie. 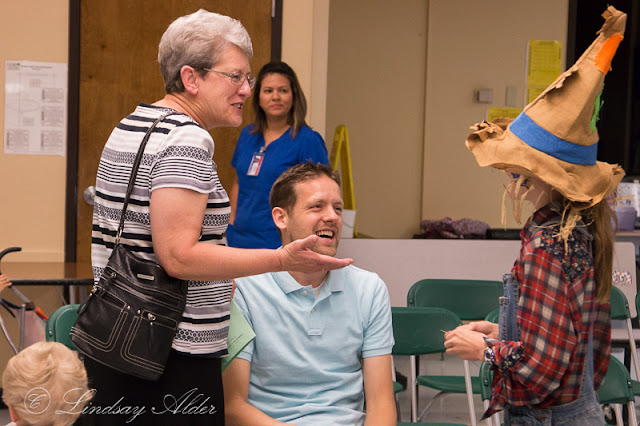 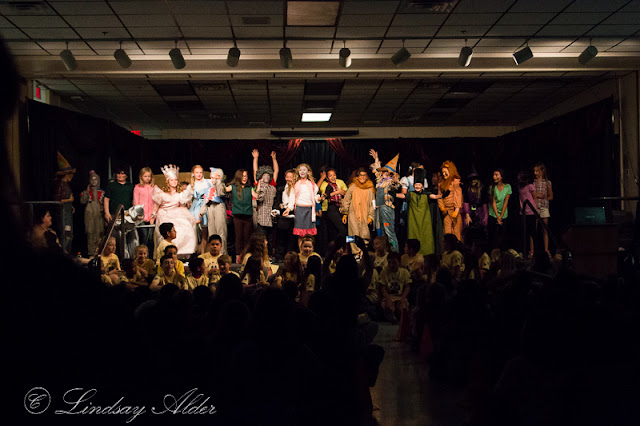 For some reason, I love this picture.  McKenzie shined like a star while the spotlight was on her, but when it came to fighting her way to center stage for the curtain call, she was completely satisfied hanging on the outskirts and letting the other characters have the limelight.  She's like that in lots of areas of her life - and is awesome that way.

A week after the show had closed, I happened to walk by our wall of backpacks and this sight caught my heart in my throat. 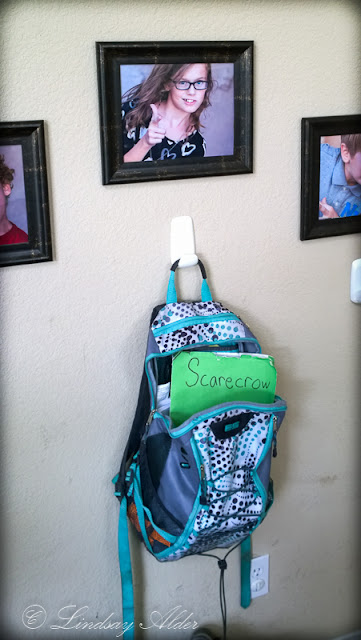 I know this will go down in McKenzie's archives as one of the happiest memories of her childhood.  She worked so hard, she nailed it, and she had so. much. fun. In fact, she just came in to bring me a glass of water, five months after the performances, saw one of the pictures in this post and left the room skipping, with her arms extended out to her sides, and singing all the way down the stairs,

"And my head I'd be scratchin'
while my thoughts were busy hatchin'
If I onlyyyyyyyyyyyy HAD A BRAAAAAAAAIN!"
posted at 12:27 PM