Weddings are fun. Weddings in Hawaii are more fun. Part 1 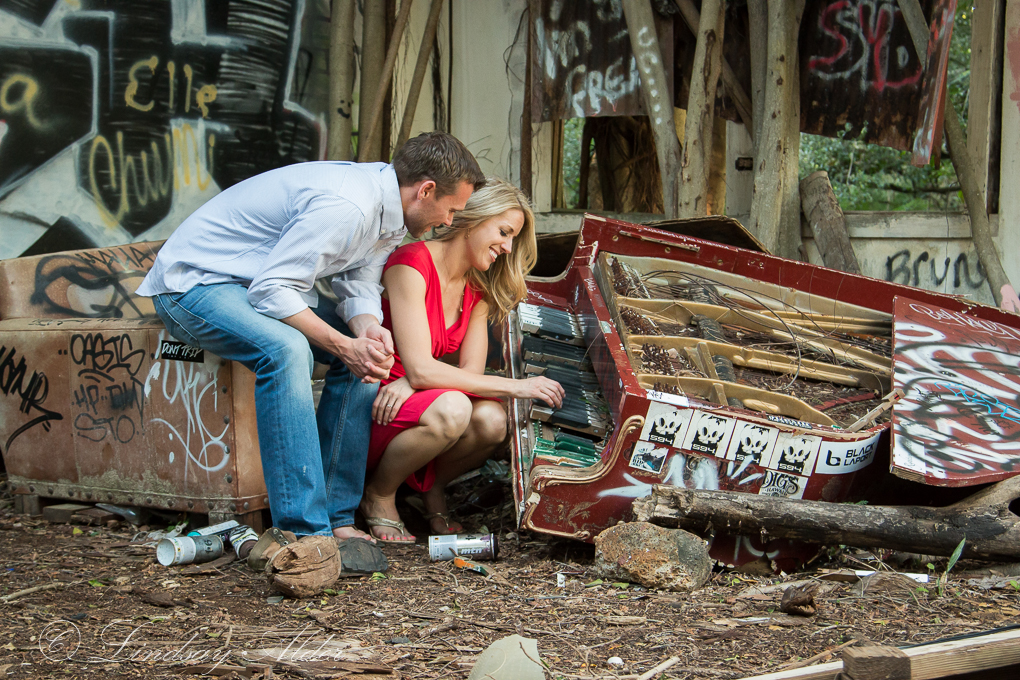 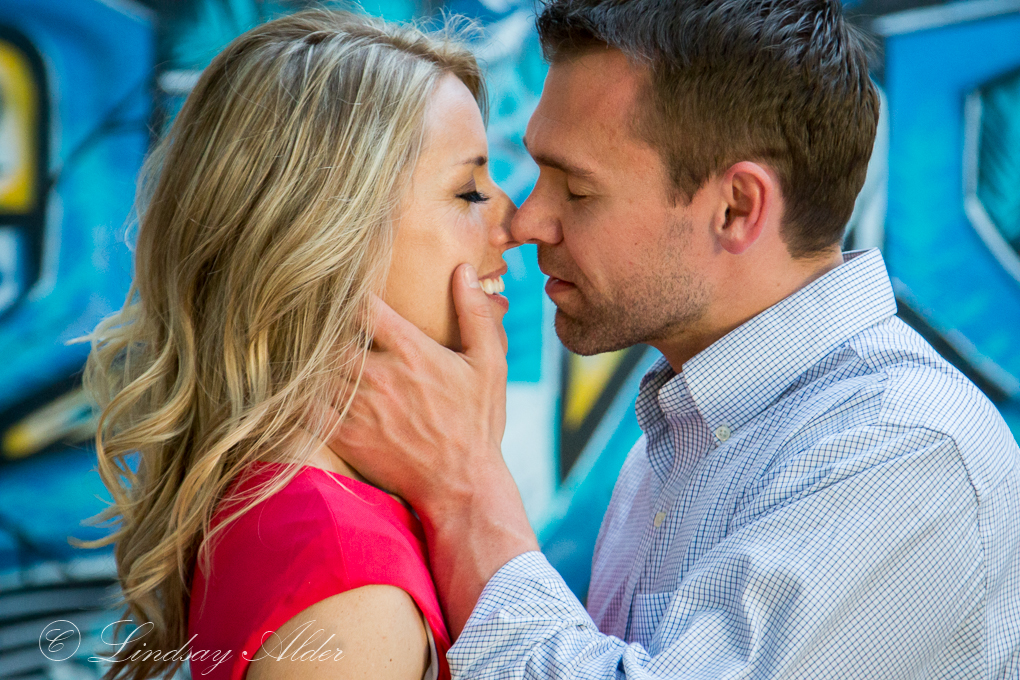 I think it might be weird how much I love that these two just got married.  Brian's sister, Heidi, and her boyfriend-at-the-time, Adam, came to stay with us for a few days during Christmas... and we just fell in love with them.  With him, with her and him, with him and her... there was a lot of happiness and celebration when they ended up engaged.

We don't have much experience with in-laws.  Of course, I have all of Brian's family, and Brian has all of my family, but 'being' the new in-law to the family feels much different than 'accepting' a new in-law to the family.  So, when we called Brian's mom on Mother's day, and Adam was there with Heidi, it was happiness all over again to realize that he will always be there.  He's one of us now.  An uncle to my kids, a brother-in-law to Brian and me, and I couldn't be happier about that.

I also couldn't be happier about their decision to get married in Hawaii, and to invite us.  I was shocked that the beauty of the Hawaiian ocean was so much grander than the beauty of my own backyard ocean (though, let's be honest... this backyard ocean is awesomely grand, too).  I guess I had forgotten that all oceans are not created equally.  The depth, the colors, the power... they're different out there.  I mean, I don't even have to TRY to get beautiful pictures... they're just sitting there in all their beauty, waiting for me to snap the shutter and take them home.  I mean, these are with my phone guys! 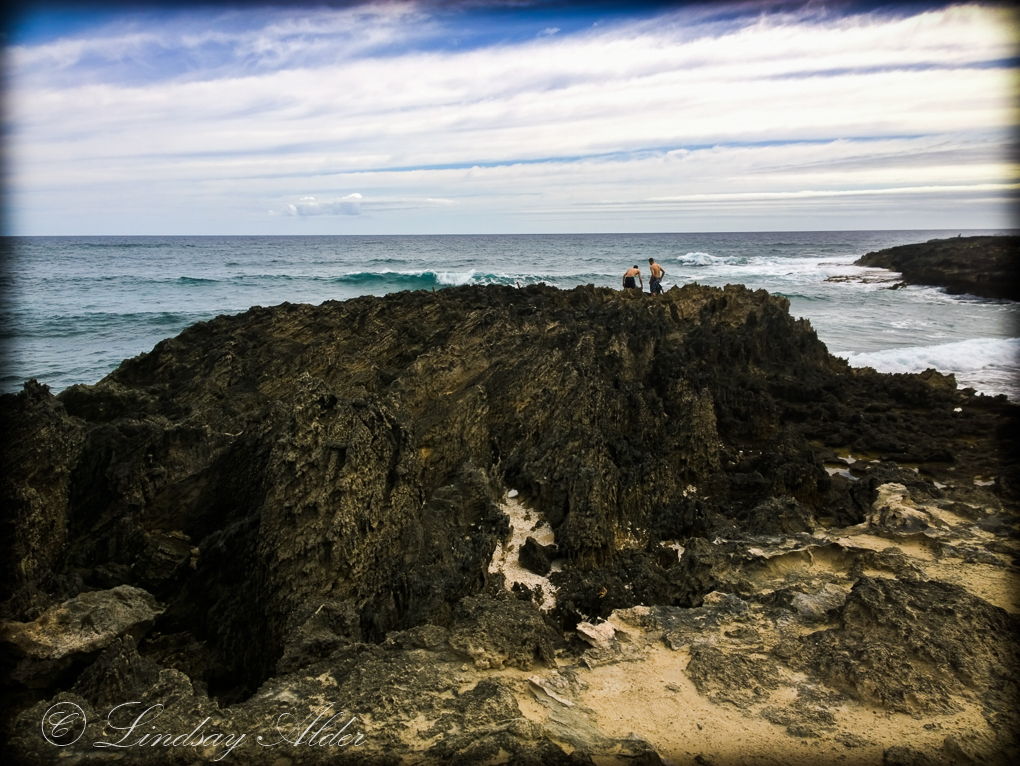 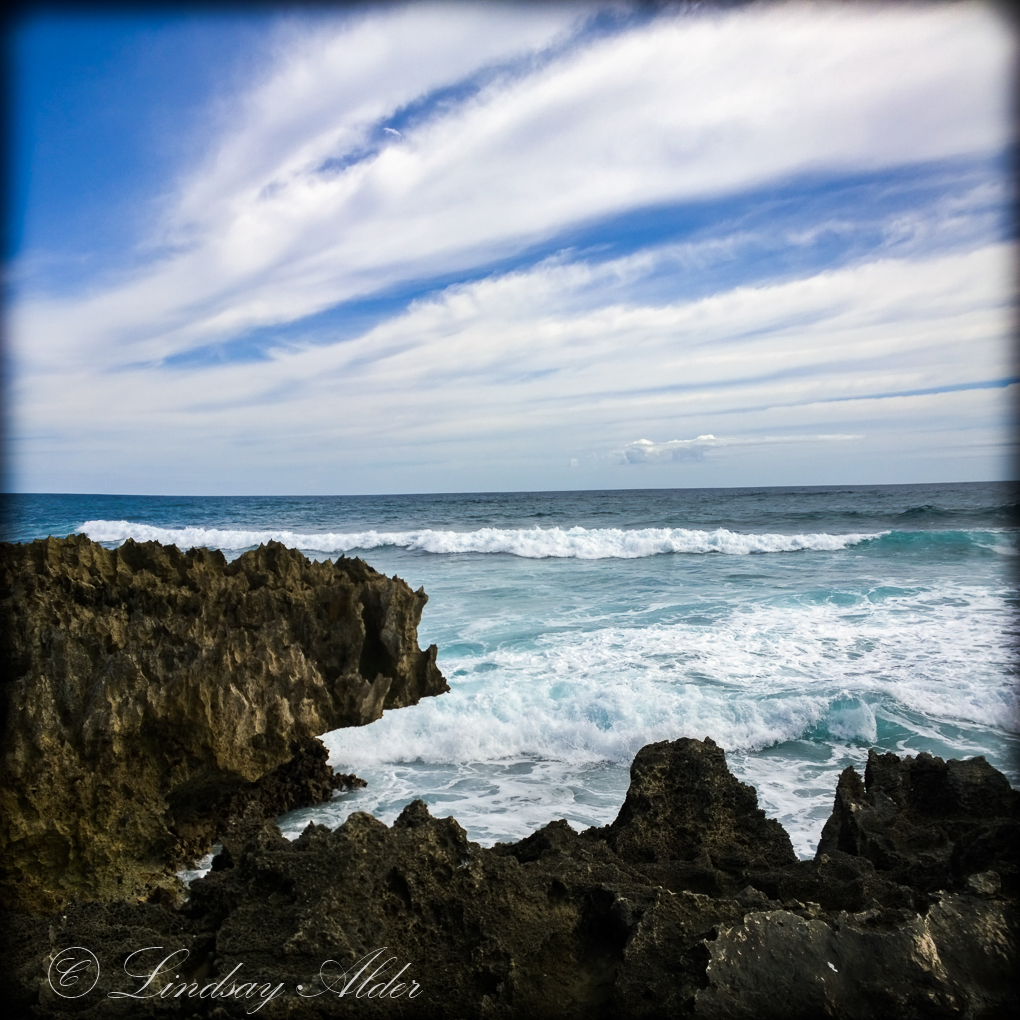 The next one isn't my favorite picture in and of itself, but do you see that color!!!  You know which part I'm talking about... oh my heavens.  Favorite, favorite, favorite. 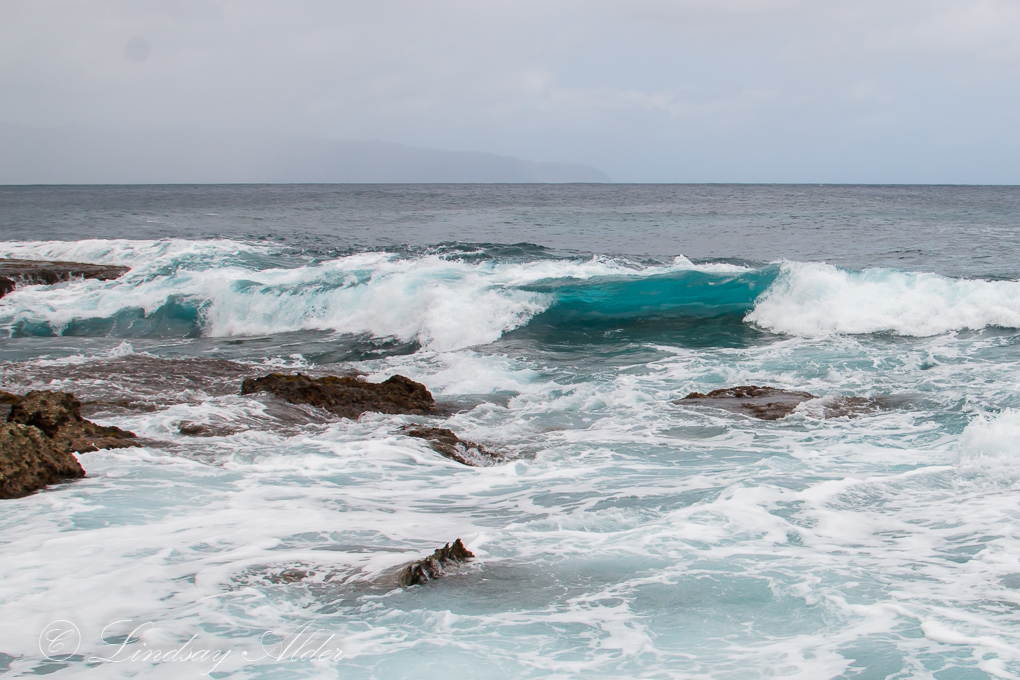 In addition to Getting Awesome Pictures of Awesome Scenery, we crammed a ton of stuff into the three short days we walked the Hawaiian land.  Check out what we did in just the first day: 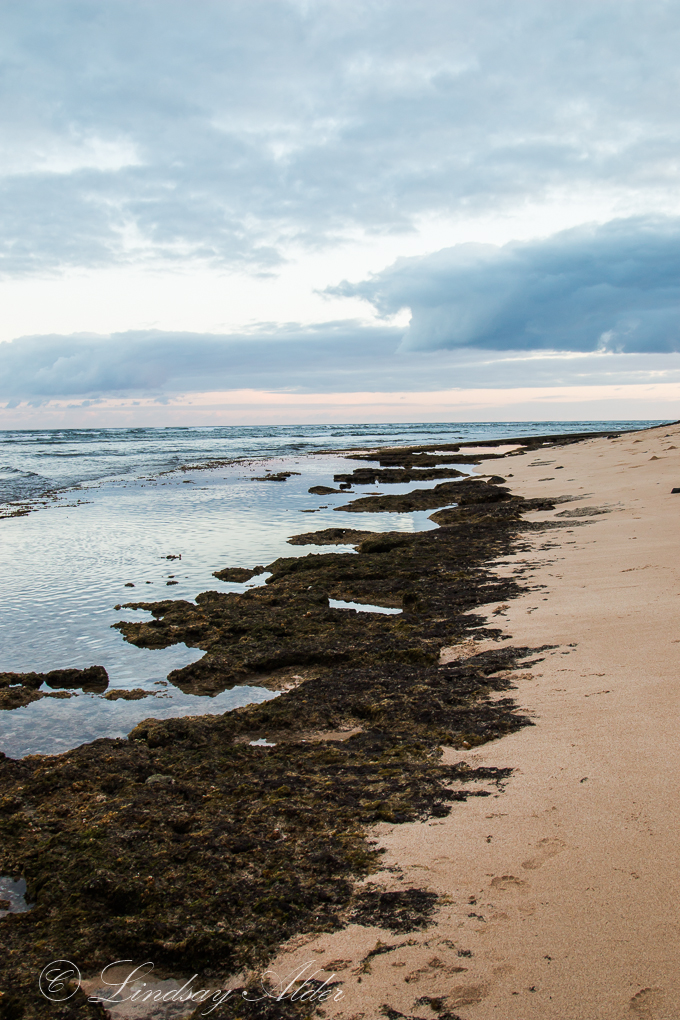 Brian and I kept saying 'Remember those days before we had children?'  Because we were remembering those days before we had children.  Our life sure was simpler... but much less interesting and full.  I loved walking alone with Brian without thinking about the kids in the back of my mind, but I was sure glad that they were there in the back of my mind if I wanted to think about them.  It made me feel lucky.  Anyway - that's not seaweed up there... it's some kind of coral.  Incredibly interesting and teeming with life. 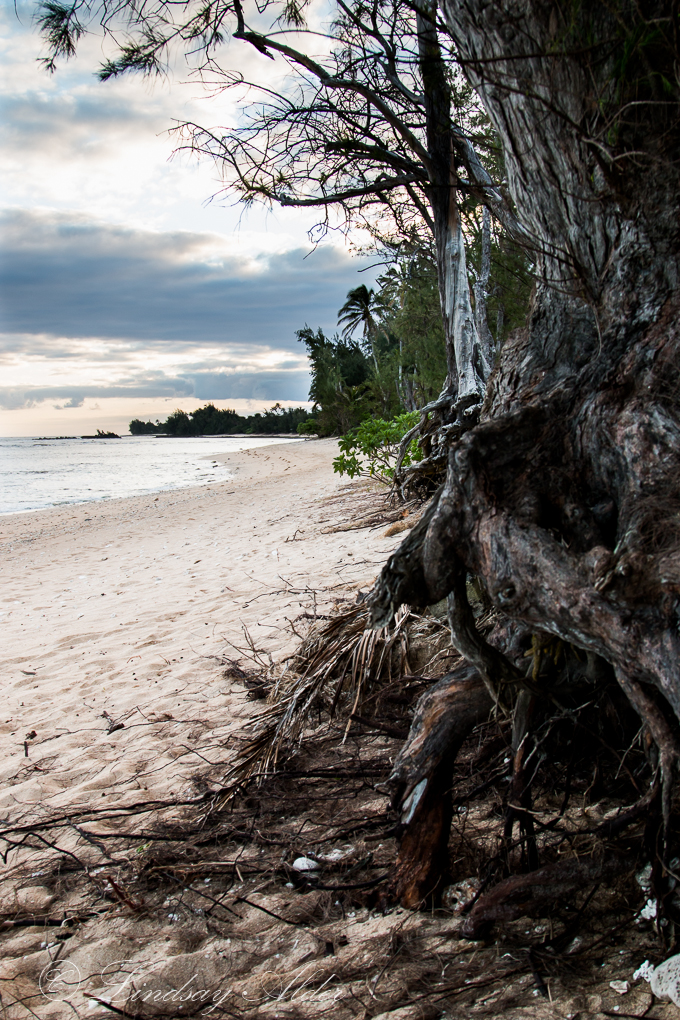 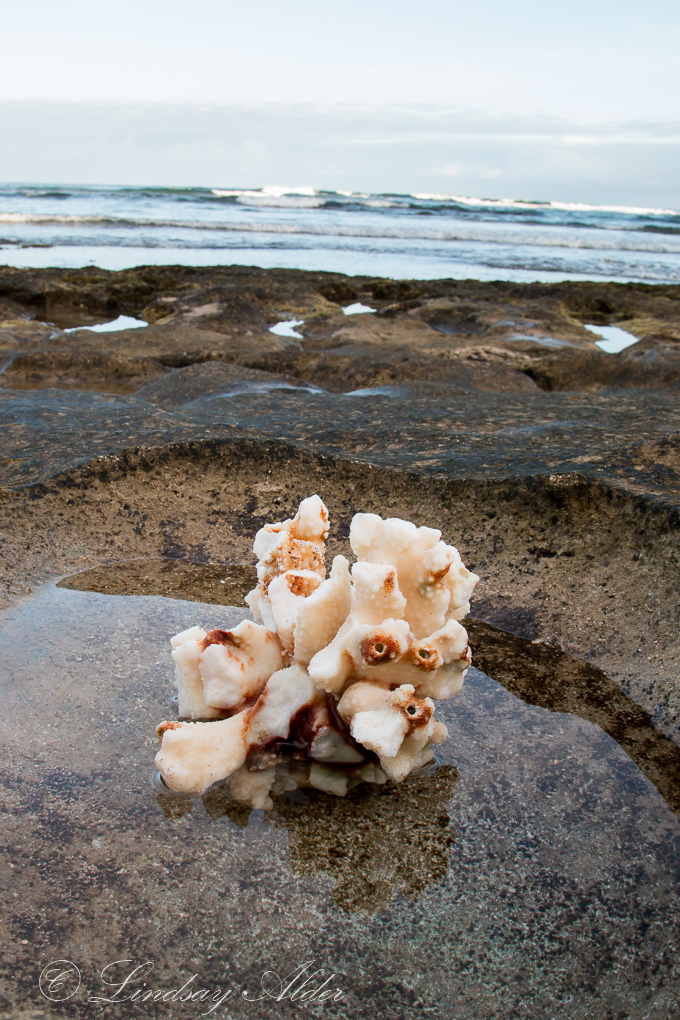 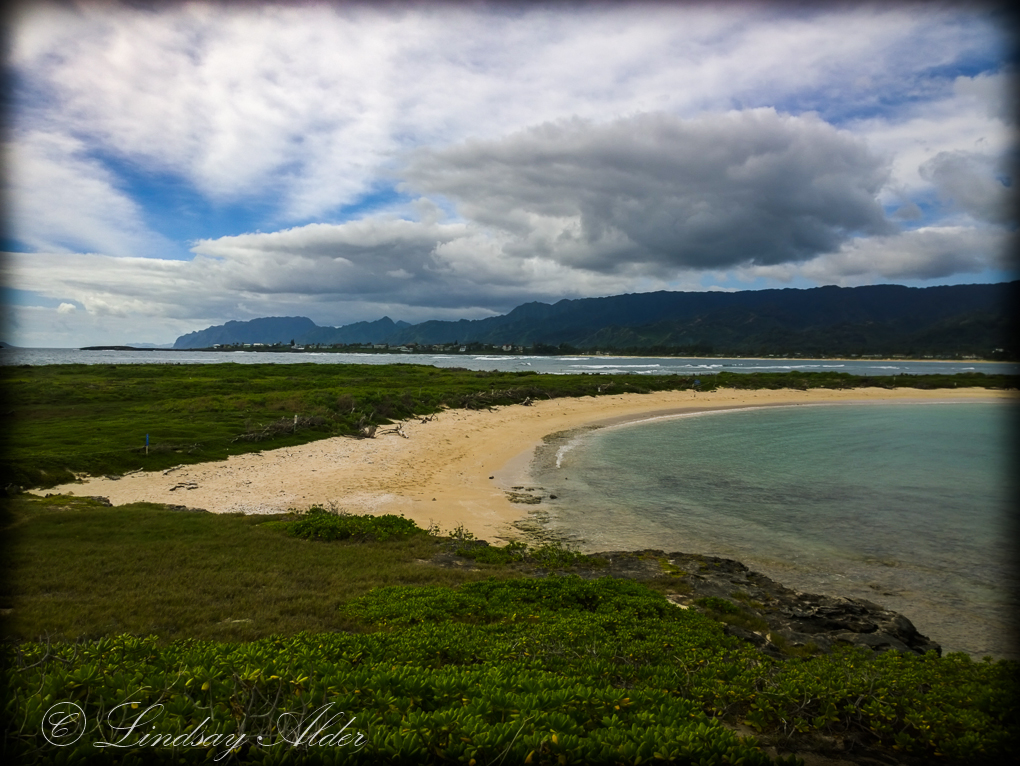 Goat island is my favorite place on Oahu.  I'm not sure if it's because I have such great memories of it (Becky...) or if it's because it truly is an amazing place.  I'm pretty sure it's both.  Looking at the above picture, you can see the main island of Oahu in the distance, and the only way to get onto Goat island is to walk through all that ocean water on a coral barrier.  It is amazingly fun because the ocean wraps around one side of the island and sends waves at you from the right, and wraps around the other side of the island and sends waves at you from the left, so as you walk you get bombarded by waves from both sides.  Which, on a calm day, is very fun.  (On a choppy day it can be scary, though... especially at high tide.) This picture shows a bunch from our group just heading back to the main island.  They haven't reached the deeper part yet which, at mid-tide, reached our chests with the waves.  Also, the coral is sharp... so since Adam's brother-in-law didn't have footwear, Adam graciously piggy-backed him the whole way.  I do enjoy that coral/sandy beach you see up in that first picture of the island, but my favorite part is the rocky backside where there are usually all kinds of sea life swimming in little pools (though, we didn't see much this time).  Those first two pictures at the top of this post (after the ones of Heidi and Adam, of course) were taken looking out over the backside of the island. 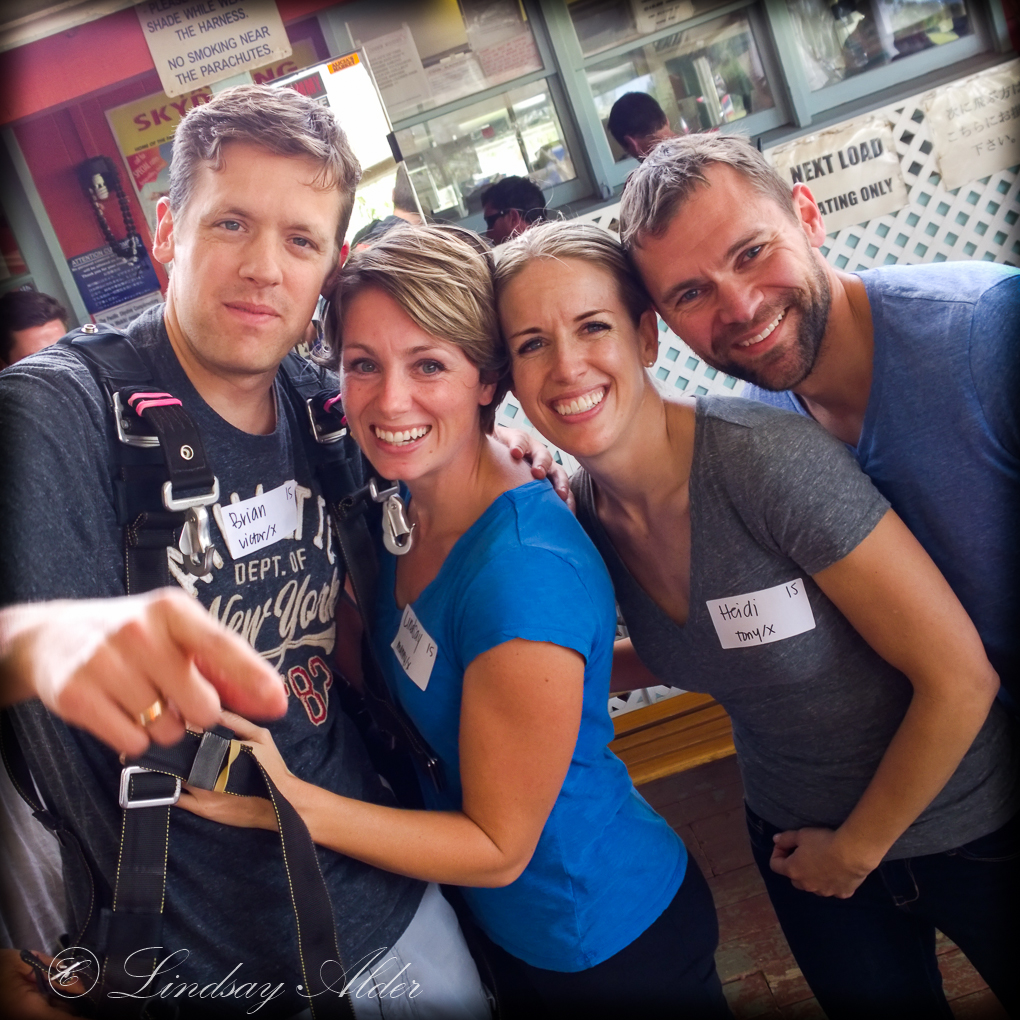 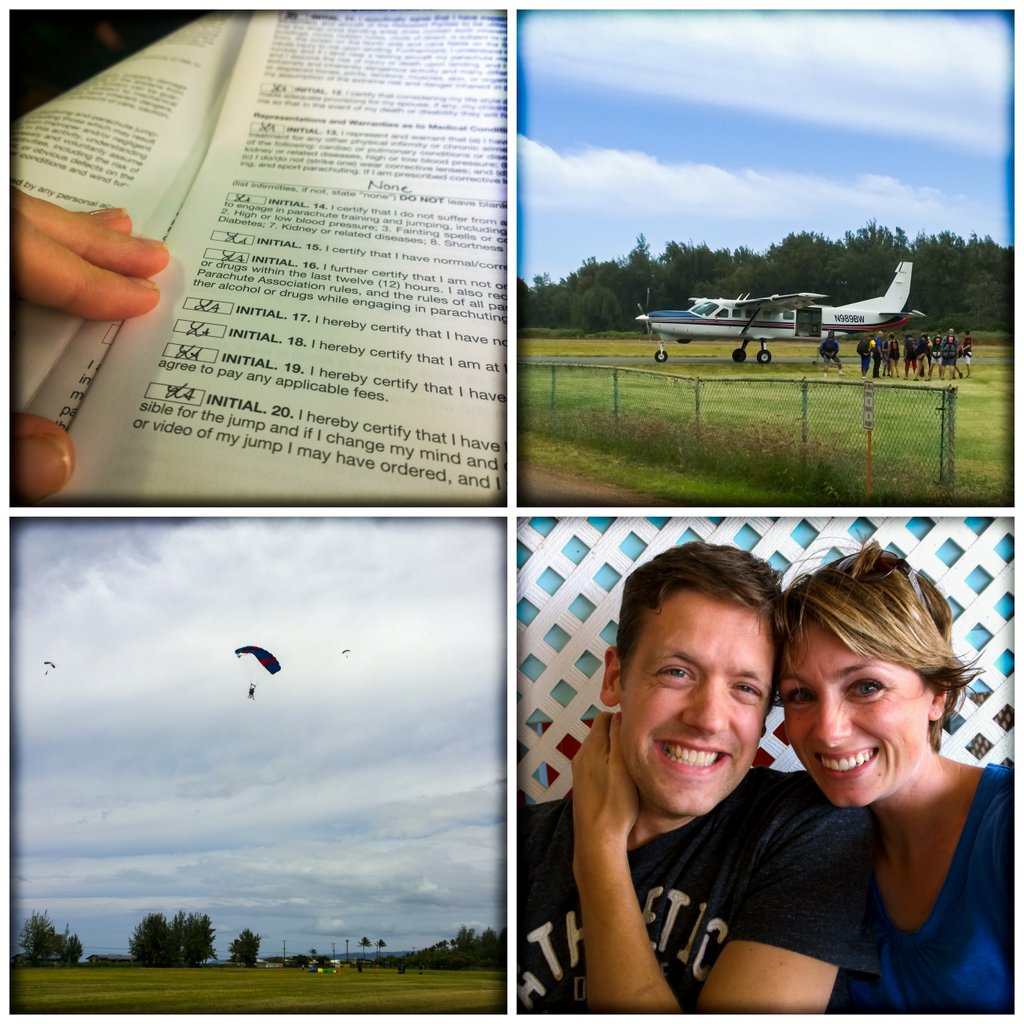 What an awesome experience!  I'd done it before (Becky... how I missed you during this trip!) when I lived out there for a spring semester at BYU-Hawaii, but this time was different.  The excitement and atmosphere and nervousness and craziness were way better the first time I did it... the actual fall was better the second time (I think it's because the first time we chose to fall for 20 seconds, and this second time we did the 60 second version)... but the breathtaking scenery when you're floating through the silent sky after pulling the parachute was equally captivating and awe-some in the true sense of the word.  If only they had allowed me to bring my phone to get some pictures of it.  It was fun to share it with Brian this time, too. 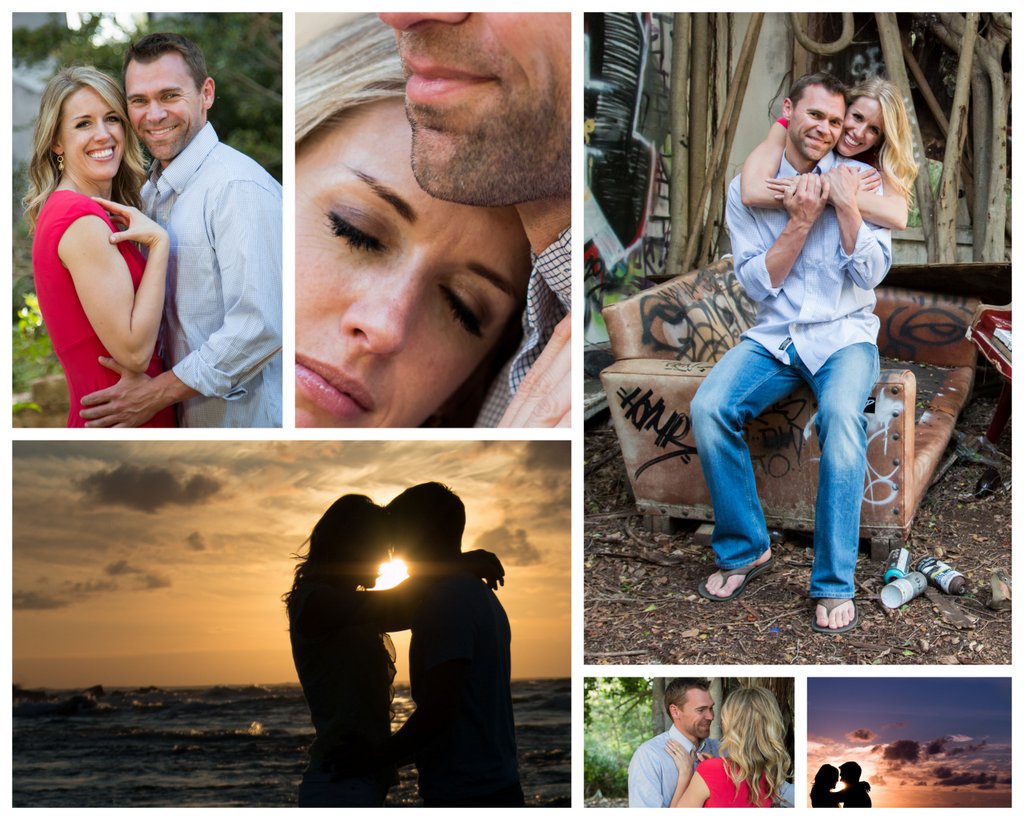 Somehow I managed to go through the entire evening without taking a single picture of the barbeque that Heidi and Adam threw for the family.  It may have had something to do with the fact that I had spent the whole previous hour and a half doing nothing but taking pictures (and really thinking about taking pictures).  My picture brain was probably just as tired as the rest of me and went to sleep for the evening.  It was a lovely barbeque, though.  It was fun to get to know Adam's family a little bit more and feel this strange, distant connection to these people that I may just never see again, but that are, in a small way, family now, too.  One of Adam's brothers and I even talked about this strange connection that night.  "So, like, do we ever really see each other ever again?" he asked.  "Good question..." I replied.  "I guess, maybe, like, for baby blessings?"
"And funerals?"

This is a bit stressful for me because I do not remember details very well... and names are details. So, someday - far in the future - I'll run into these people again and remember that we spent a couple of days together in Hawaii years ago, but that might be the extent of my memory.

Well.  Hopefully they'll feel the same way about me...

We went to bed exhausted that night and hoped for a good nights rest.  Because the next day: wedding.
posted at 10:22 PM