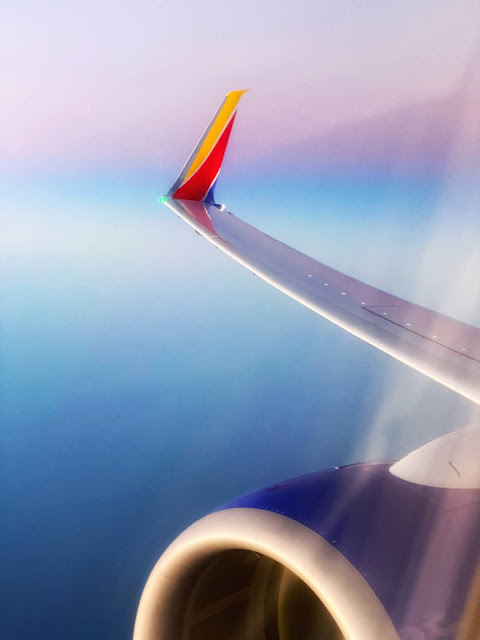 Covid did its best to keep us from Hawaii this year. (Well, not really... it did try, but it certainly could have tried harder.)
In order to be able to board a flight to Hawaii during this pandemic, there are two main obstacles. 1) You have to test negative for Covid, and 2) you have to find a Hawaiian approved testing place that can test you and have results within a tight, 72 hour window.
We had solved for the second obstacle with a little asking around and a lot of Google searching, but coming down with Covid just a couple of weeks before we were supposed to leave made clearing the first obstacle quite impossible.
People who get infected with Covid can test positive for a loooooong time after symptoms are gone, and even after the threat of spreading it disappears. Apparently, a person who has weathered a mild case, as we did, does not spread live virus after the first 10 days (meaning he is not contagious), but he still could have enough dead virus in his system to trigger a positive test result for a while - sometimes for months.
And we did, indeed, test positive.
But we had heard through the grapevine about an exemption route that we could explore which would allow us to fly even with a positive test result. Of course, we had to meet some very specific criteria and fill out much more paperwork to make sure we were safe (criteria involving time between a positive test result and the departure date, and a signed letter from a doctor stating that we were symptom-free).
You'd think that it would have been an easy decision for me whether to go or not to go to the beautiful island of Maui with my favorite person, but it turned out to be one of the more difficult decisions I've made recently. 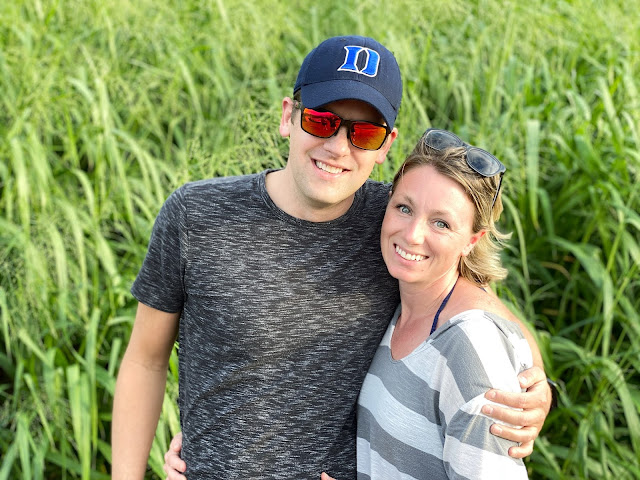 Even if the exemption route made it possible for us to go, it would cut two days off of our vacation - was it still worth it? Was it really responsible to get on a plane and fly during this pandemic in the first place? And would things be open enough on Maui to enjoy our time there? And the biggest question for me, how would I get around the island without a properly functioning foot? Would I be too much of a burden? If it had just been Brian and me I wouldn't have had so much anxiety over that part of it, but it was not just Brian and me. We were supposed to be going with Brian's partner, Raymond, and his wife, Allison. And while we have traveled with them before and really like them, I didn't know how they would feel about me holding them back and was honestly quite embarrassed about the whole thing.
It took Brian and I a week of back and forth and back and forth and a few gentle nudges from both Brian's mom and mine (Lindsay - I really think this would be good for you... it's been such a hard year with homeschooling and your foot... I think you need this) before we hesitantly decided to sink our hearts into going.
We're so weird.
In hindsight, of course going was the right decision! It's Maui!!!
So we jumped through all the necessary hoops to be cleared to go (as I mentioned, we did have to push our departure date back two days to qualify for the exemption route), packed our swimming suits, my crutches, and a knee scooter, and landed in the land of blue and green late in the night to find our rented convertible, shiny and red, waiting to take us to the Grand Wailea Resort. 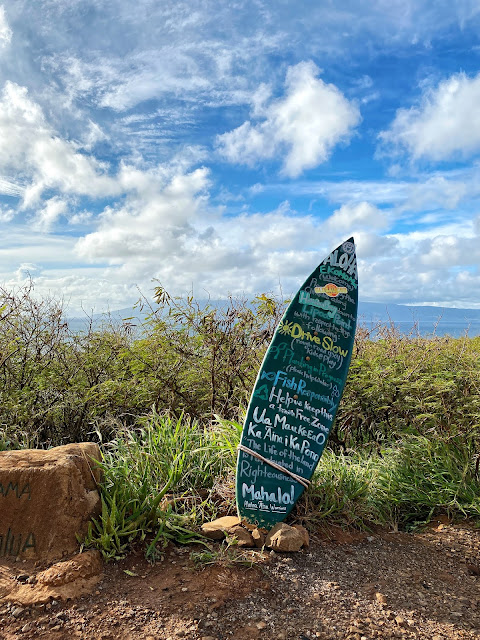 A favorite from that first night was trying to fit my knee scooter into the trunk space of the red convertible. I'm kidding - it was the opposite of a favorite, and I even ended up in tears after thirty minutes of trying to Tetris our way into the tiny car with all of my bulky foot gear... something about the dark garage, combined with the late night and lack of sleep, combined with the manifestation of me being a burden I guess.
I do wonder what the garage attendant thought as he saw me wiping tears from my cheeks. He came over and offered for us to take a slightly bigger convertible that had more trunk space.
Wait, that's an option?
Yes. And it was parked right next to the one we had been trying to cram into.
It was a much better idea, and the knee scooter and crutches slid in without much of a fight. I still drove off that night wondering if we'd made the right choice in coming at all.
But do you know what happened the very next morning?
The sun came up and touched the ocean and the sand and the trees and the mountains - and my heart expanded in a way that felt a little bit life changing.
We changed into our swimming suits, tucked my crutches underneath my armpits, met the Theodosises down by the pool, and started what would become one of the most memorable and treasured vacations.
A few of our favorite things:
The Nakalele Blowhole 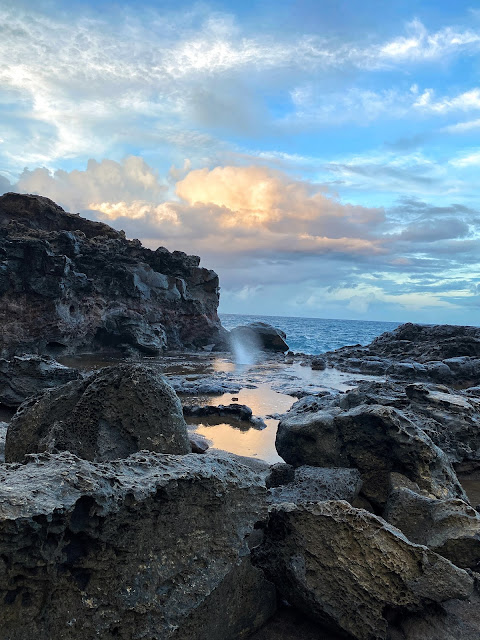 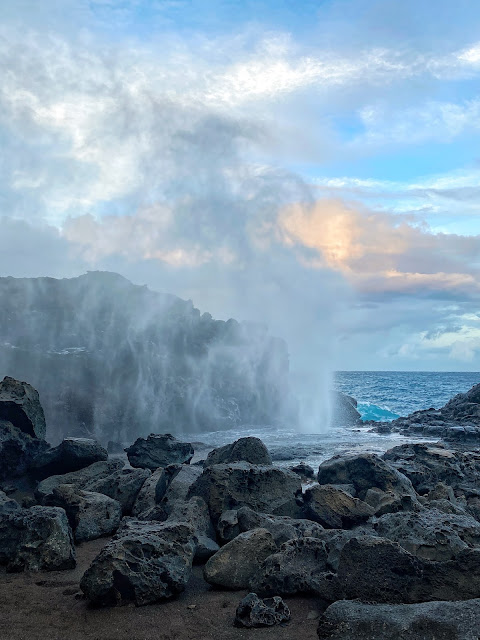 Nothing makes you feel quite as small and powerless as standing at the mouth of a giant blowhole that sprays water a hundred feet into the air. This was one of two places I'd budgeted into what I called my Foot Budget. I had to leave my crutches behind, and we hiked (s.l.o.w.l.y) down boulders and rocks to get to this point. I could have stayed down there for hours watching the rhythm of the waves spray through the blowhole, but the sun was setting, and we had a dinner appointment to make. So up we went. 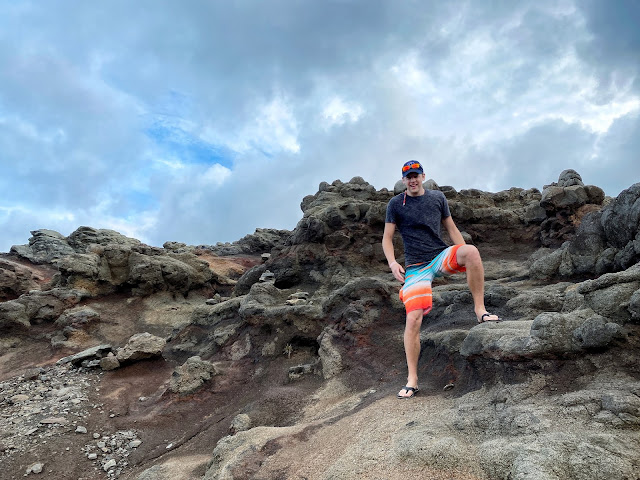 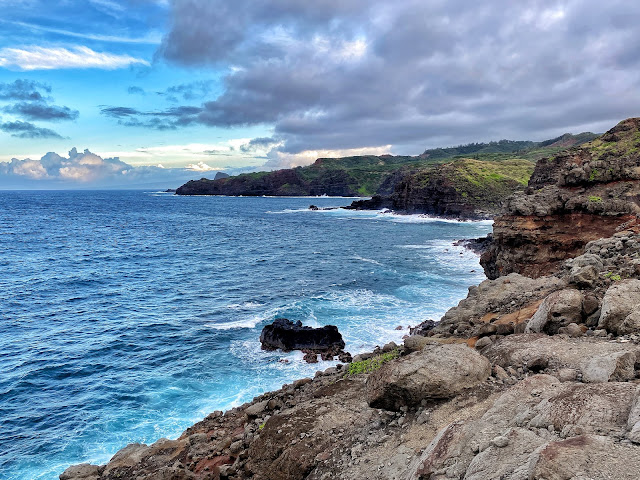 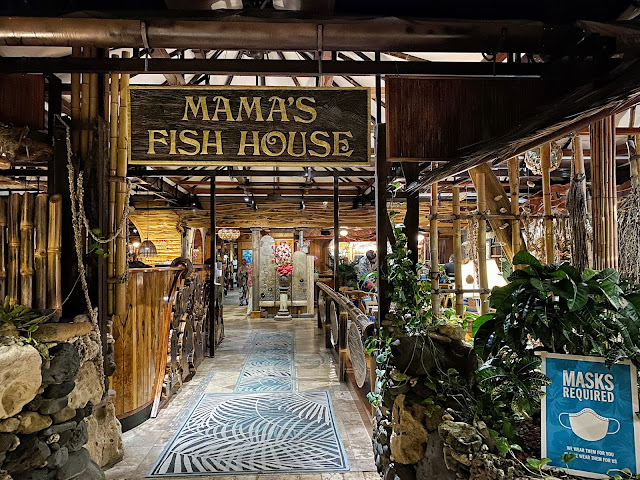 Mama's Fish House served up one of the best dinners I've ever had. So good, in fact, that right after eating there on the first night we hopped right back on the website to reserve another slot for later on in the week. We were told that getting reservations to this Fish House the week of was almost impossible - so we felt pretty blessed that we were able to get not just one reservation, but two. A Covid-perk for sure.
Road to Hana 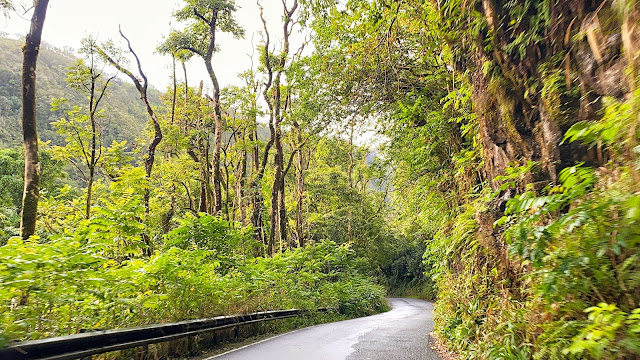 What an absolutely amazing adventure! 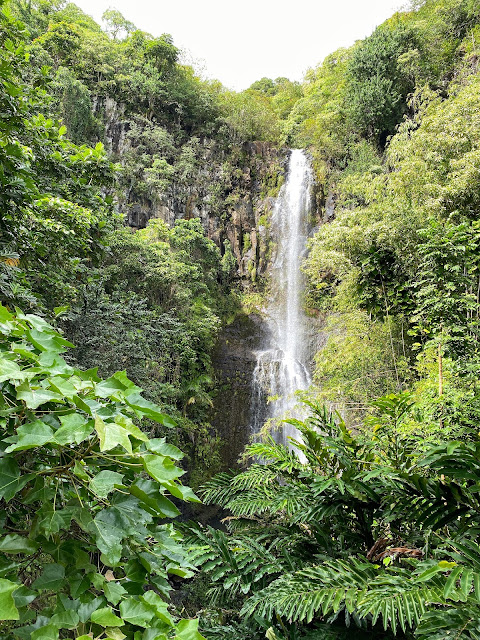 At almost every turn there was something incredible to see. Beautiful waterfalls, impressive caverns, and mountains and mountains of green. 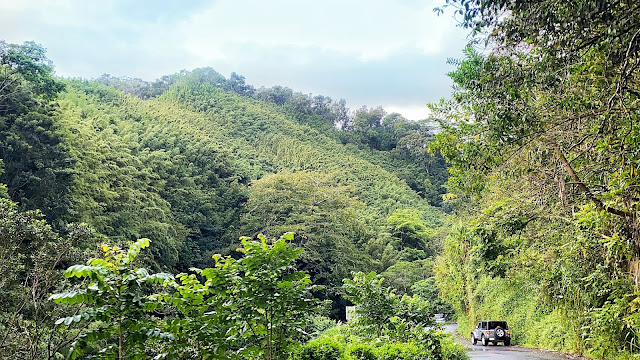 We tucked my crutches into the space between the seat and the door, put down the top on the convertible, and cruised like kings down one of the most beautiful roads in the world.
We stopped at every spot we wanted to and passed by those we didn't. It was the first time we'd ever done it but from what we understand, during non-Covid times, the road is incredibly crowded and can take many more hours to travel than it did for us. We felt so grateful for it.
At one stop, Brian, Raymond, and Allison wanted to run down a path to see some kind of amazing tree - but that wasn't part of my foot budget, and I felt like it was a bit too far and cumbersome to get there on crutches, so I stayed back on the road with a giant leaf and had a delightful time. 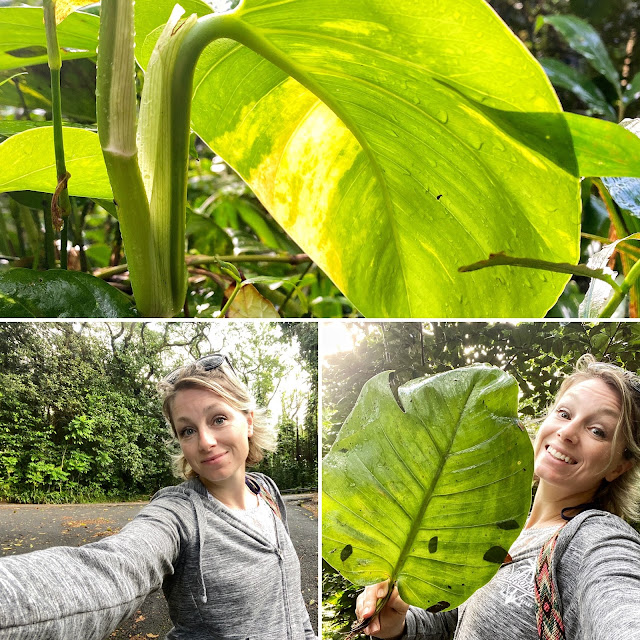 Just as I put the leaf down the rain started falling, so gently, through the vines, and the sunlight hit the raindrops in such a way that the raindrops both reflected the bursts of golden light and showcased their own transparency. I stood there mesmerized by the sheer beauty of it.
Another beautiful thing along the Road to Hana, this tree. It's my favorite of all the trees. 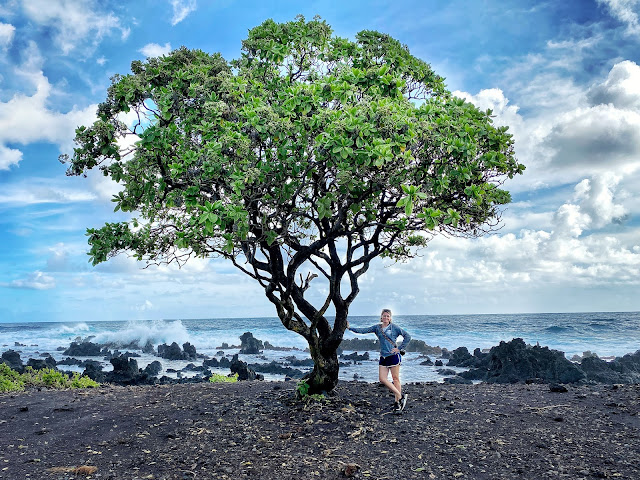 And it was found on the most beautiful beach. 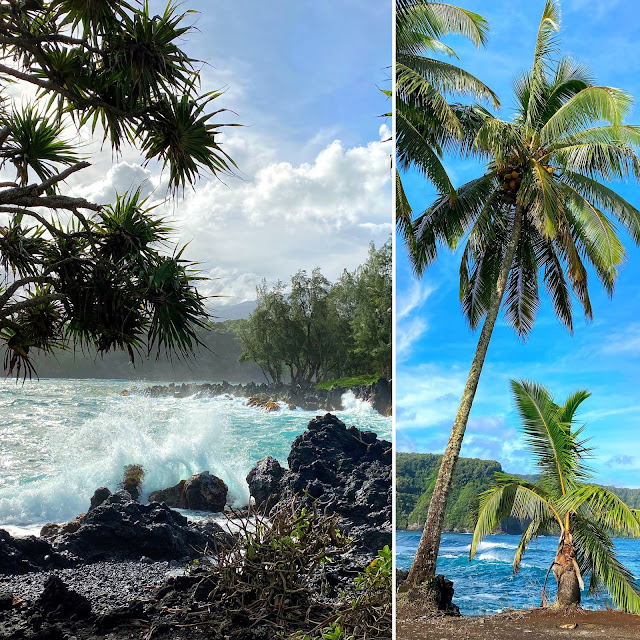 Also along the road: a black sand beach. 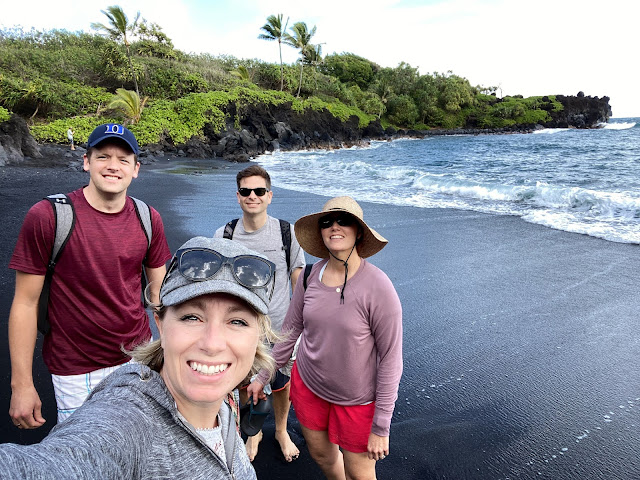 Did you know that there was a thing such as black sand beaches? I didn't. I don't quite know what I was expecting here, but, truth be told, I was a little underwhelmed. It was just kind of like... sand... but black. 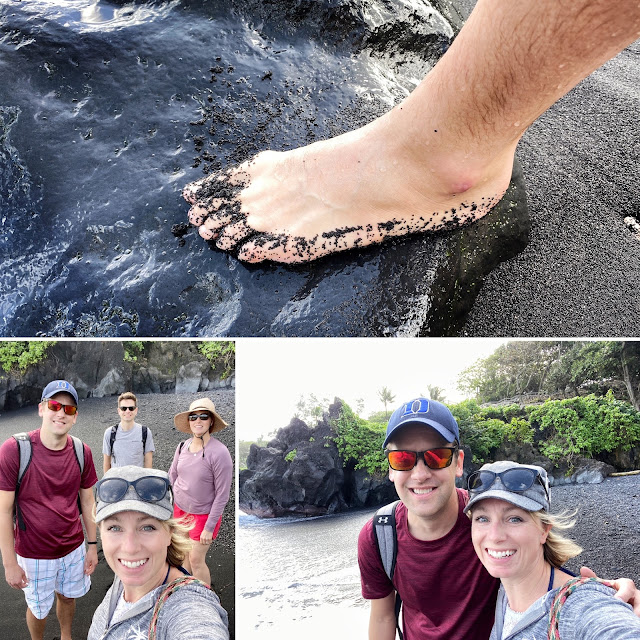 But do you know what is cool? Black sand caves. Caves are cool. 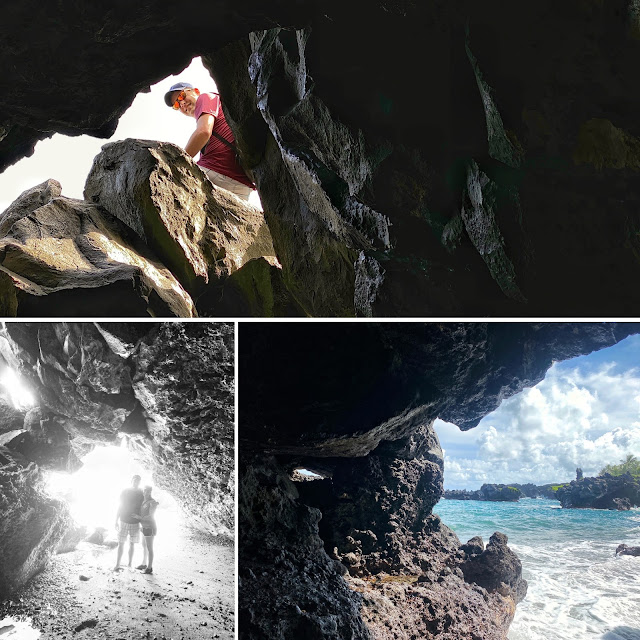 The black sand comes from black lava rocks that line the beach. And the whole thing really does have a beauty to it. 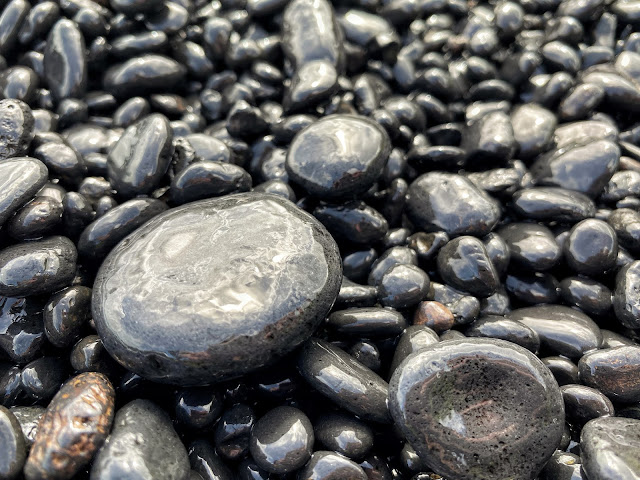 At the end of the road came the Haleakala National Park and in it was a hike that I was dying to take. It was the second and final thing I had planned for in my foot budget, and I cherished every single step of it. 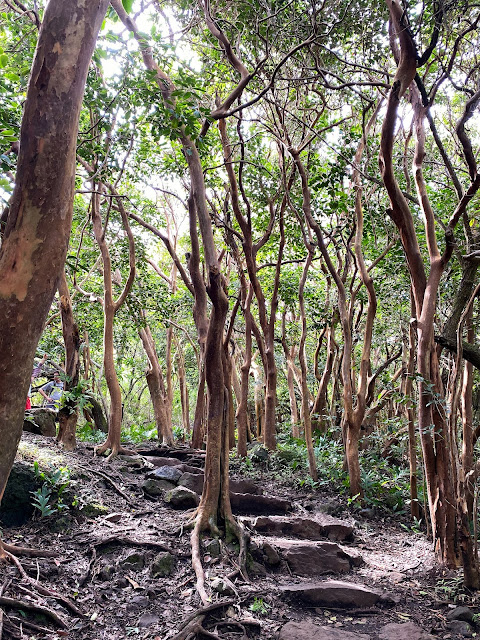 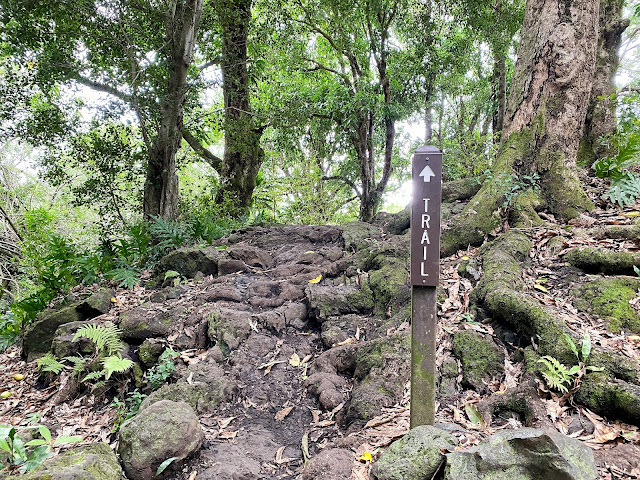 Traveling with the Theodosises is fun. Hiking with them, driving with them, eating with them... Allison is strong and sharp, Raymond is hilarious, and when we came upon this remarkable tree along our hike, it was no surprise that we stayed for 20 minutes climbing and laughing and swinging from its branches. 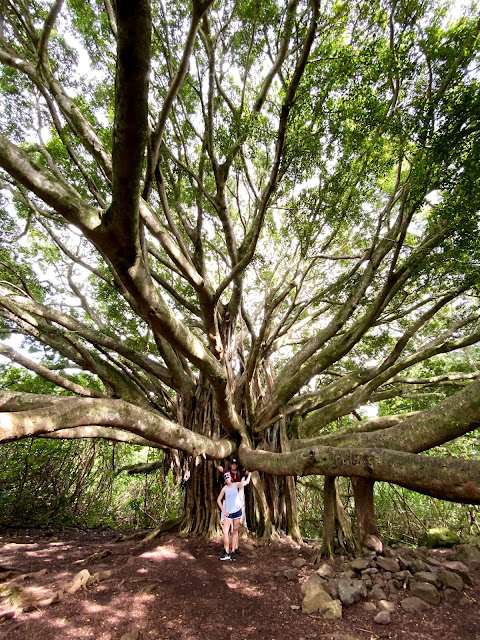 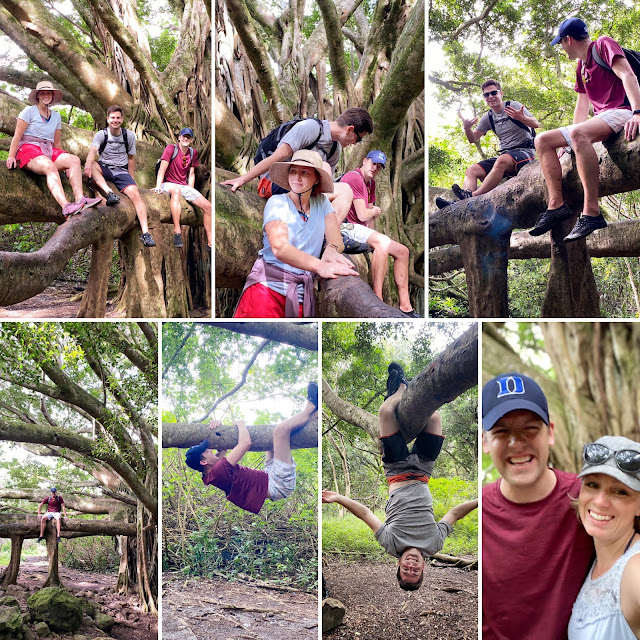 The thing I was most excited about along the hike was the rumored bamboo forest. And boy, did it not disappoint! 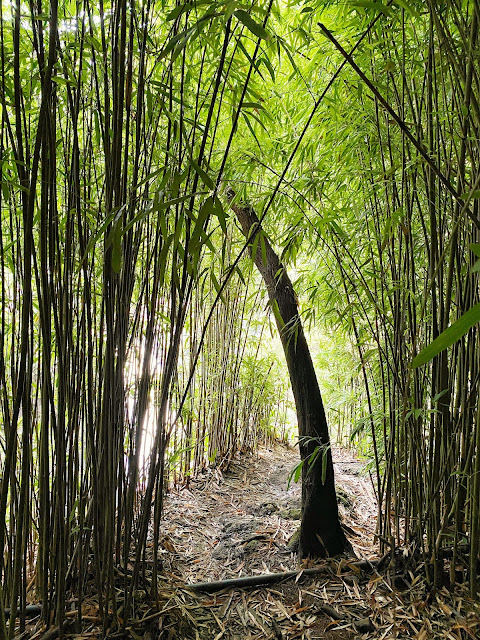 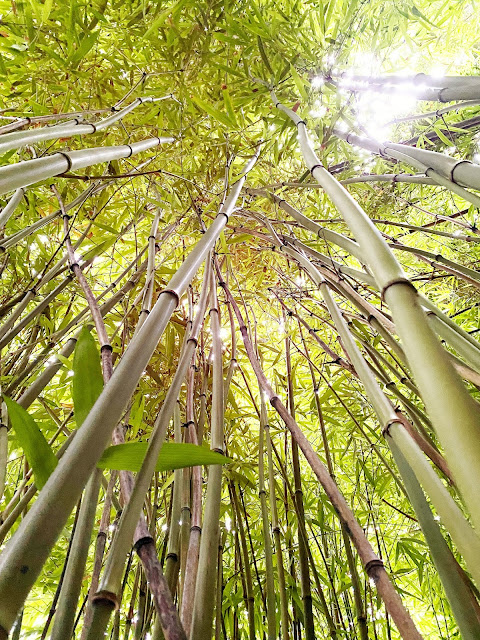 Thousands of bamboo trees lined the paths!
It was at this point my foot decided the rest of the group should go on to the waterfalls without me and I found the most amazing spot to sit and relax in the bamboo forest. And, apparently, when I get left alone I take selfies. 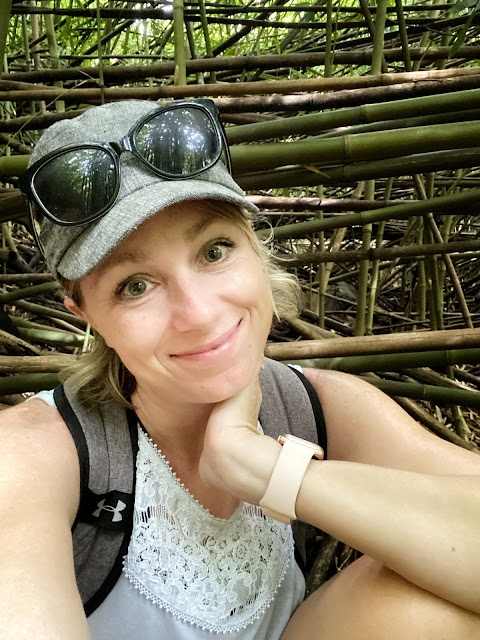 I hate taking selfies. Brian teases me all the time about being a millennial, which is either true or not true depending on which website you're reading. I prefer to think of myself as a Xennial, caught in the middle between Generation X and the Millenial generation (also, if you blend those two words together another way you might end up with Gennial - and I do not recommend you make that mistake in public. Ask me how I know). Anyway, like I said, I feel very uncomfortable taking selfies, which strengthens my argument about not being a millennial, right?
But there came a point in my life when I realized that no one else was going to take pictures of me, so if my children and grandchildren wanted proof that I was involved in any of our activities, I'd have to learn how to point the camera at myself every once in a while. And I do. Which weakens my argument about not being a millennial, right?
Anyway.
After my soul was filled in the bamboo forest, I decided to start daintily stepping my way back down the mountain with the hope that I would be close to the end by the time the others caught up with me so it wouldn't feel like I was holding them back too much.
But, it turns out that when I'm alone my foot is not the main thing impeding my speed. It's my camera. I couldn't stop stopping to take pictures of all the beautiful things. 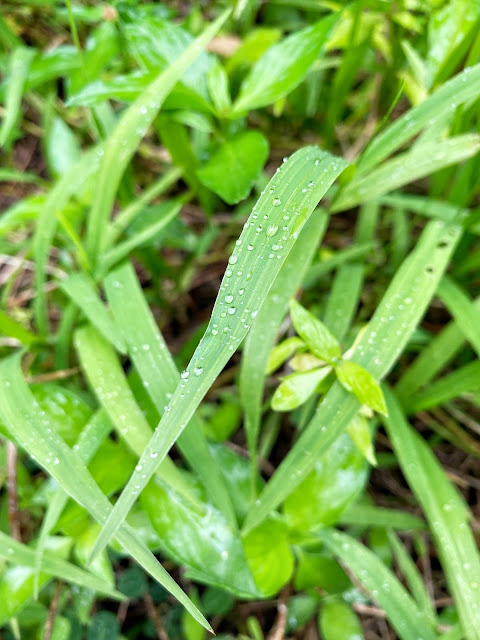 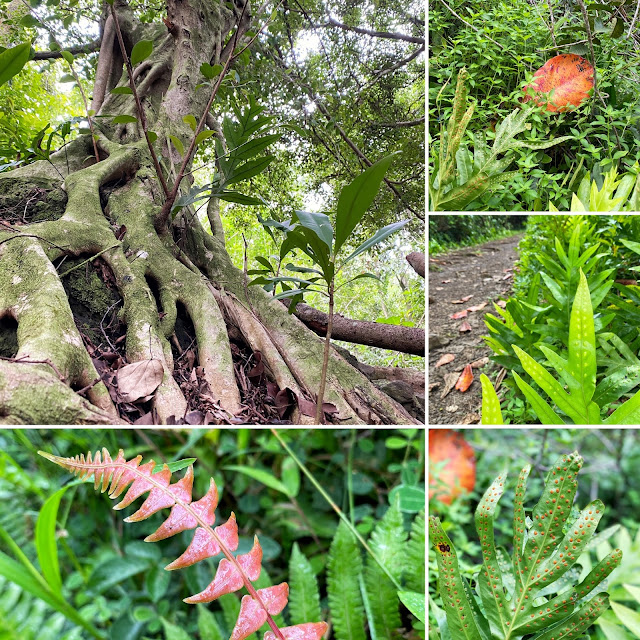 And, luckily, everyone seemed happy to see me when they caught back up and no one grumbled even under their breaths about having to slow down. And in that moment on that beautiful trail my thoughts changed, and my mind relaxed, and I began to see that my foot would not have the power to ruin this vacation after all.
posted at 8:01 PM