The Eagles are Out 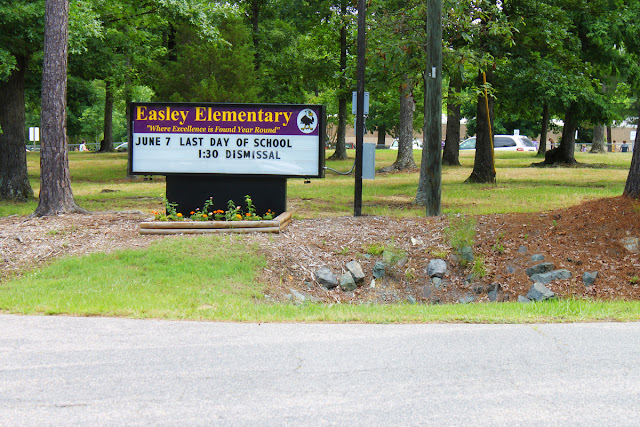 There I was, driving to a school party, happily singing along to a country song on the radio when this sign popped into my field of vision and squeezed my heart in its ugly vice.  Actual tears, folks.  I had to hide in the parking lot for a few minutes to get myself back together.  Sometimes the reality of this whole 'moving thing' hits me like an unexpected tidal wave and just drenches me.  But... as much as I hate to leave this school, it's pretty nice to have the last weeks of it behind us.  In the last two weeks of school, I spent a portion of almost every day within its walls.  I spend a lot of time there, anyway, helping out in each of my kids' classrooms, but these last two weeks were a bit much.  I wonder what it's going to be like when I have three kids in elementary school...  so many parties... so many lunches... so many performances and programs... teachers and gifts...  The school is worth it, though.  And, more importantly, so are my kiddos.  I love that they love to see me in their classrooms.  I love knowing their friends and I love that their friends know me.  I love knowing their teachers on a personal level as well as a professional level, and I am happy to have had the chance to spend so many hours there.

Anyway, this next picture kind of sums up the last two weeks of school for us.  This kid never falls asleep in the car.  But he was so out this time I couldn't even wake him... and then I noticed the two school Visitor Stickers on his shirt, a third one stuck to the armrest beside him (all from different days), and his lunchbox thrown on the seat next to him.  Sorry, bud.  You sure do have a different life than your older siblings had when they were three... 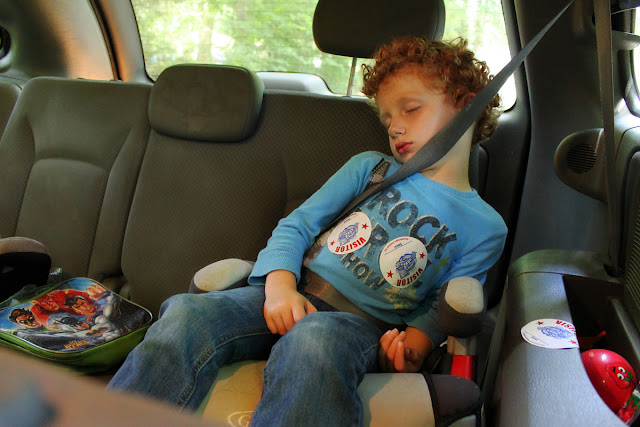 Here are some of the school-things that kept us entertained: 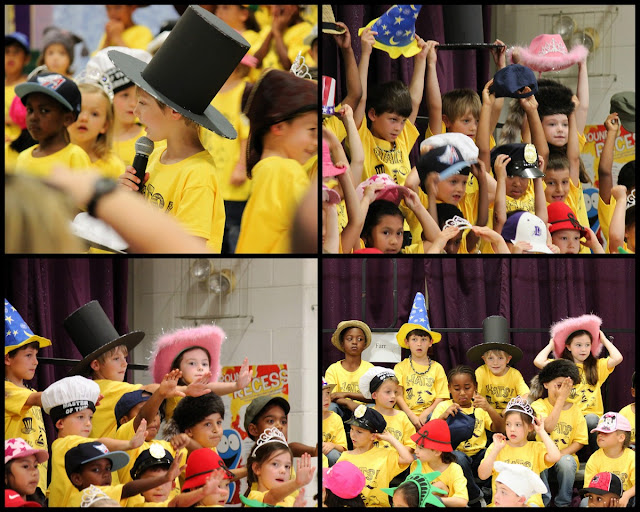 Okay, so this happened a couple of months ago... but it's school related, so I'll put it in here anyway.

What's cuter than dressing up a bunch of kindergarteners in hats and then having them stand on risers to sing songs about hats?  Probably nothing.  Carson's kind of a big kid in his classroom.  So, early on he found the other big kid and they became best buddies.  Can you find Abe Lincoln and Wizard... they're BFF's.  I love the way Carson's homemade hat pushes his ears out.  He looks like a little elf. 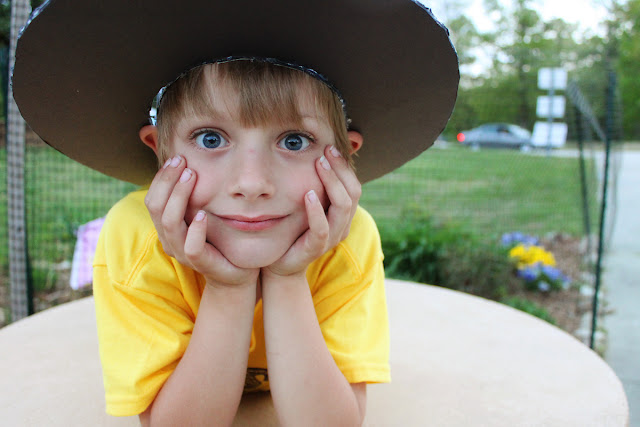 It was exciting for me to see the performance excitement spark in his eyes.  Great job, bud!
Golden Skippers 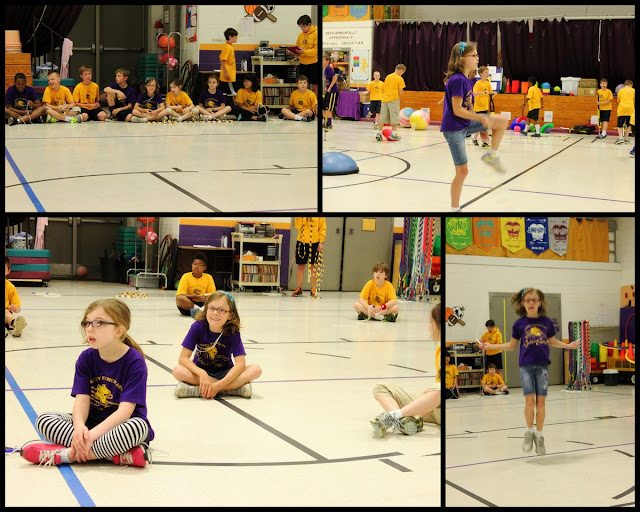 Every Tuesday morning throughout the year, we'd wake up a little early to get McKenzie out to her Golden Skippers jump roping rehearsals.  The final Tuesday, we parents were invited to come and see all they had learned throughout the year.  I saw that she had learned all sorts of things... like, how to jump over the rope a few times... and how to pass it under one leg while rotating it for a friend... and how to try again and again and again and again to jump into the rotating rope herself... but the best thing she learned was how to carry her jump rope around her shoulder and look cool while doing so.   You can see her awesome skill in the bottom left picture in the collage above.

She may become a famous jump-roper in the years to come... but for now, she just has a blast with all of her friends. 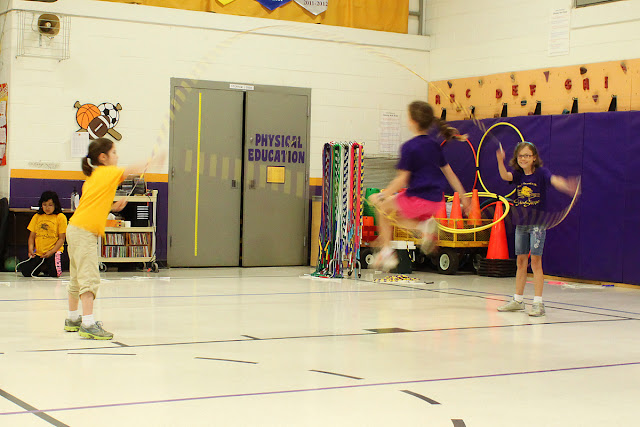 Art Exhibit at the Mall 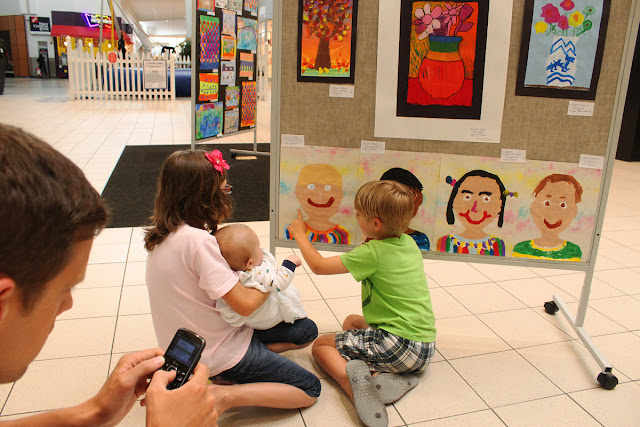 Carson was shyly honored to have his school self portrait chosen to be displayed at the art exhibit in the mall.  There were only a handful of kindergartners with the same story, and he needs a little self-esteem boost every once in a while, so we played it up and made a night out of it.  We traveled the halls of the mall and ooohed and ahhhed at his self portrait when we found it.  We took pictures and then celebrated by eating dinner in the food court.  Have you ever tried to feed your family at the food court in the mall?  TERRIBLE economic idea.  I think we spent close to forty dollars to fill all of my bottomless pits - and the food wasn't even that great.  Next time, we'll hit Red Robin.  But, that's beside the point. I'll give you a high-five if you can figure out which portrait is Carson's... 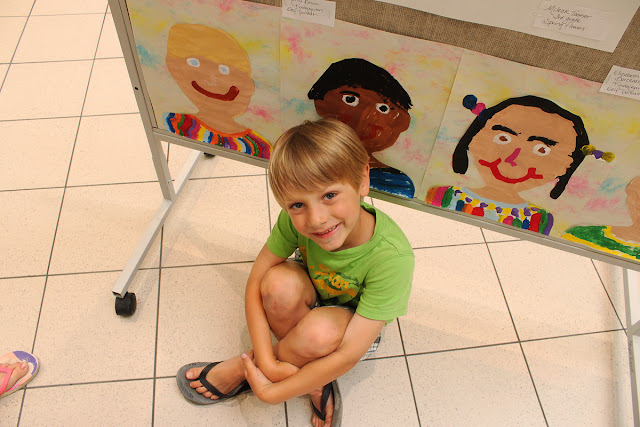 The third graders spent the last couple of weeks of school learning about famous historical people.  Each child picked one famous person to dress up as at the school 'wax museum'.  They then researched this person, wrote a short speech and memorized it to deliver as this person, and found a costume to don to be this person.  McKenzie chose Annie Oakley.  Thankfully I had a long brown skirt and a cowboy hat... McKenzie looked awesome, and she practiced her speech over and over and over again.  She even threw in a little accent.  The night before the performance, she called the whole family into the living room and asked if she could please practice with us as her audience.  Why, yes!  She told us that she and all of her classmates would be lined up against the wall with a fake button on the floor in front of them.  The entire school would then mill around the halls and whenever anyone stepped on her button, she would recite her speech.

The morning of the performance, she had a nervous excitement following her around as she checked and double checked that she had everything she needed.  Fifth graders would be watching her, you see.  And you know how scary they are.  I told her she would be awesome and that I would come and push her button about halfway through the hour... just before the fifth graders.  The time came for me to hop into the car when I got a call from the school.

I dashed to the school and found her, dressed as Annie Oakley, sitting in the office with a juice box and a water sitting beside her.  She had her head bowed and broke into tears when she saw me (not common).  I sat beside her and wrapped her up as tightly as I could and gently asked what had happened.  She would not say a word, so I got the story from one of the adults who had been standing nearby.  She was in the middle of her speech when... she just fell.  She hit her eyebrow on the tile floor, and regained consciousness a couple of seconds later.  I hugged her closer and pushed her hair back to see the goose-egg.  Yep.  Ouch.

Poor girl.  I kept thinking that she was going to break her silence, or at least lift her head, but after forty-five minutes she still hadn't said more than a word and was still very curled into a ball with my arm wrapped tightly around her.  I was in charge of a pizza party for her class that was starting right about then, but McKenzie did not want to attend.  The mothers who had been sitting with us offered to throw the party for me and I brought my sweet girl home.  When we were alone, she told me that her tummy had been hurting, and then she started seeing spots on one kid, so she looked at another kid, and then he had spots too.  Then she just remembers being on the floor, looking up into a friend's mom's eyes who was saying, "Kenzie?  Hey, Kenzie!  It's okay!"  Poor McKenzie was terrified.  And embarrassed.

So, anyway - no pictures of the wax museum... but trust me, she was great the night before.  And she looked just like Annie Oakley (or at least, like a third grader dressed up like Annie Oakley). 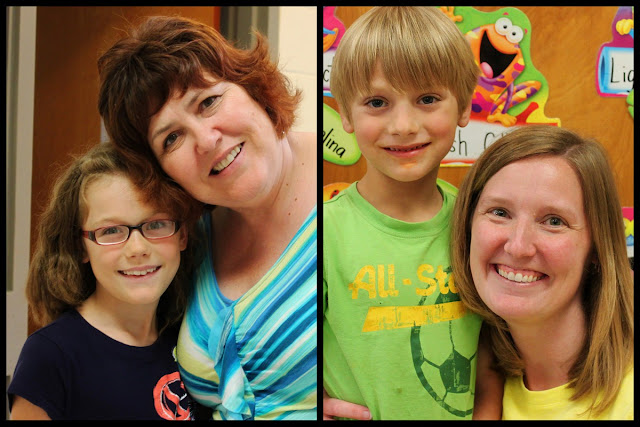 It's always so, so nice to have teachers that really care about your kid.  These little ones have been through so much this year... they've had to fight a bit for happiness with so much drama going on around them.  But their teachers were right there for them.  Every step of the way.  They helped me troubleshoot problem behaviors and figure out where they were coming from... they stayed positive and lighthearted and let my kids feed from that when I couldn't offer it to them myself.

But then we were done

I sent the kids off on the bus that last day of school with gift cards for their teachers (sorry... it was the best I could do this year), and an extra hug and smile of encouragement.  I knew it would be a hard day for McKenzie - and a half an hour before the bus dropped them back at home, Miles and I made a special trip to the store to grab everything we could think of that could go on an ice cream sundae.  We had it all arranged on the island just before I saw the bus creeping up the road through the rain to our corner.  I ran outside with the umbrellas to greet them and Carson came off the bus with both hands raised in a 'school is done!' fashion.  I clapped my hands together and cheered for him.

"Hooray!  Summer is here!" I said.  I continued to clap and smile as McKenzie came down the stairs with her head bowed and shoulders slumped.  I put my arm around her, waved goodbye to our wonderful bus driver, and told all the children at the stop to come in for ice cream sundaes.  They ran (fast) into the house with all of the umbrellas and I looked down at McKenzie.  "You okay, girl?" I asked.  Her brave face disappeared and she crumpled into a tearful heap and buried her face into me.  I hugged her so tight I was afraid of breaking a rib and all I could say as my heart broke in two was,

We stood there, getting soaked, for at least a minute, but eventually pulled ourselves into the house and filled our bowls with ice cream. McKenzie and I left the little kids in the crazy kitchen and snuggled down into the couch together.  "You know," I said thoughtfully as we cradled our ice cream sundaes in our laps, "ice cream really does make everything seem better."  She smiled and dipped her head into my arm for a hug because, you know what?  It was true. 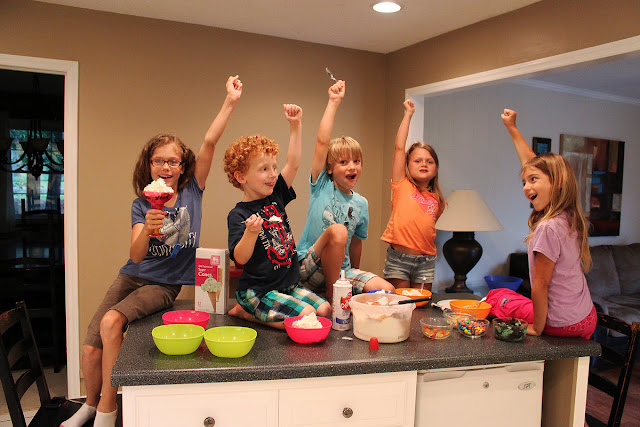 Oh, Easley Elementary.
We will miss you. 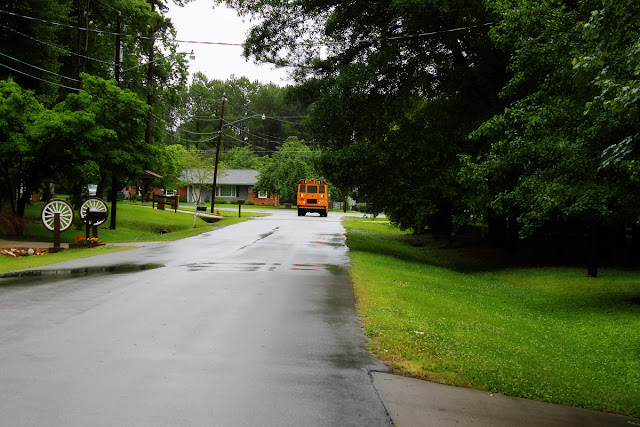