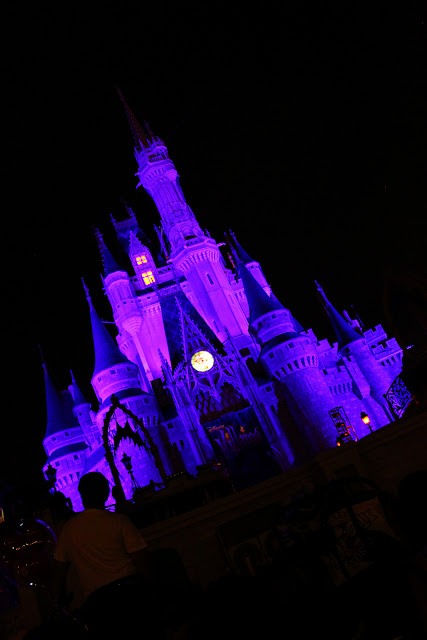 Not sure what it was in the middle of September that got me antsy to get out of the house... Maybe it was the burnt garlic smell still lingering in our kitchen... maybe it was that I had seen enough of the insides of my toilet... maybe it was because I panicked when I realized we might live across the country next year... but something snapped inside of me one afternoon and Brian got an unexpected phone call with  me on the other end of the line saying,

He thought I was crazy at first.  Well, probably thought I was kidding at first, crazy when he realized I was serious.  A Disney vacation in 2 weeks?  Don't people plan for months for that sort of thing?  Well, technically yes, but it never says in any rule book that you have to plan in advance.  And, hooray for me! it only took a couple of hours for him to start feeling the excitement of it, too.  Let the planning begin!  Amber arrived to stay with us around the same time and we got straight to work brainstorming costume ideas (because, if you've never been to Mickey's Not so Scary Halloween Party before, dressing in costumes is a giant part of the fun).

"Hey," she said one evening after a particularly electrifying game of Candy Land, "lets go as Candy Land characters!"  After hearing an audible gasp from McKenzie at the suggestion, I looked into her star struck eyes and knew exactly where her mind was.  "Oh!  Can I please, please, please be Queen Frostine!?"  Yes, dear.  You can.

Once the idea was on the table there was no looking back, and Amber and I buried ourselves in fabric, thread, pins, fabric, paint, glue, cardboard, fabric, tape, lace... And fabric.  We cut and stitched and guessed and re-stitched and realized that sewing all of those costumes without any semblance of a pattern was quite a bit more difficult than we would have originally guessed.  But, oh boy, did we feel triumphant in the end. 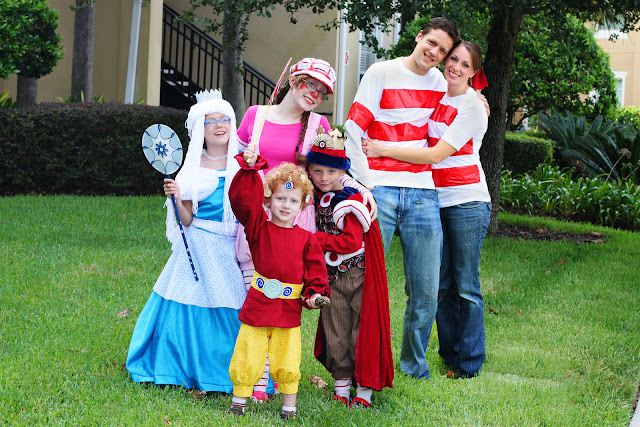 Amber and I may have gotten carried away in the details... to the point of making a wig for McKenzie out of a scrap piece of fabric and a whole roll of white yarn; a delicate crown out of lace, hardened by a dip in glue (and a hairdryer to dry it) and then hand painted in blues and silvers; several meticulously crafted and painted cardboard circles of various sizes; and a fairly awesome kingly staff made from a fun noodle, blue duct tape, and a large bouncy ball... 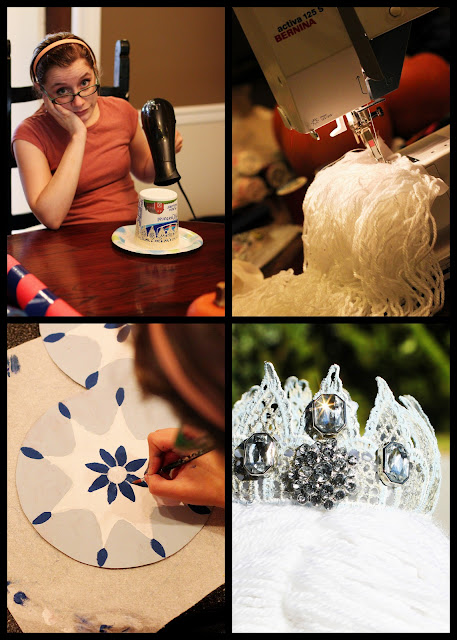 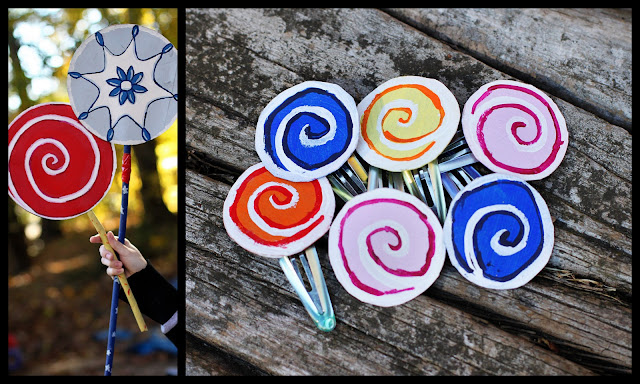 But, oh did McKenzie fall head over heels for her Queen Frostine costume.  Amber and I did, too.  Silky fabric... petticoats... dreamy. 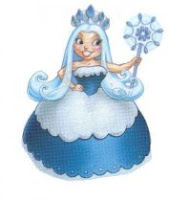 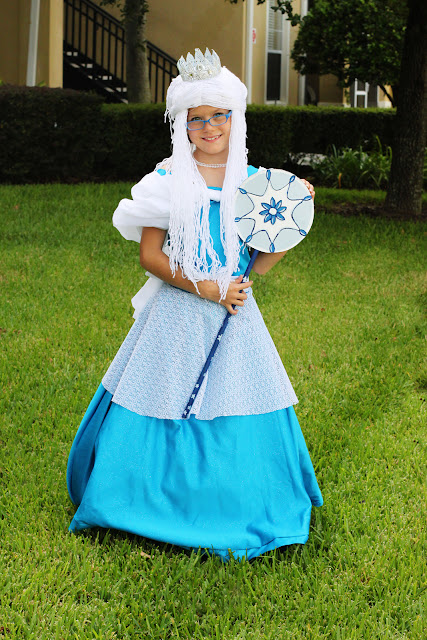 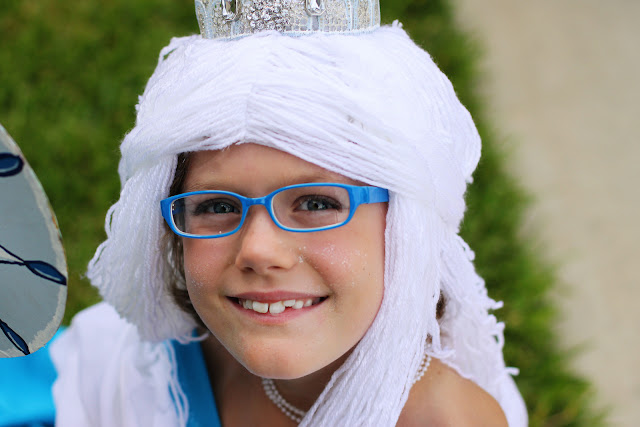 Carson kept coming back to the idea of King Candy, but never really settled on it until we discovered the fear behind the hesitation: wearing a skirt.  Once we assured him we could change the costume in any way he wanted, he was sold.  He felt pretty kingly in his modified version. 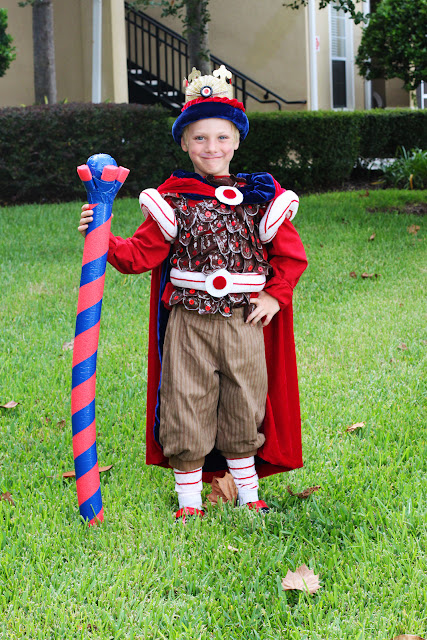 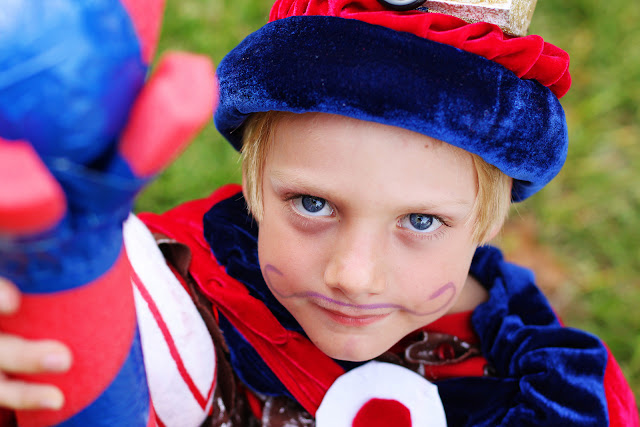 See those 94 little pieces of brown fabric sewn to the front of his shirt (giving him that awesome, kingly, armored look)?  Each one was machine-stitched around the edges to prevent fraying, outlined with a silver fabric marker, adorned by a hand-stitched red button, and sewn onto his shirt row by row to create the layers.  Let's take a moment of silence to honor them. 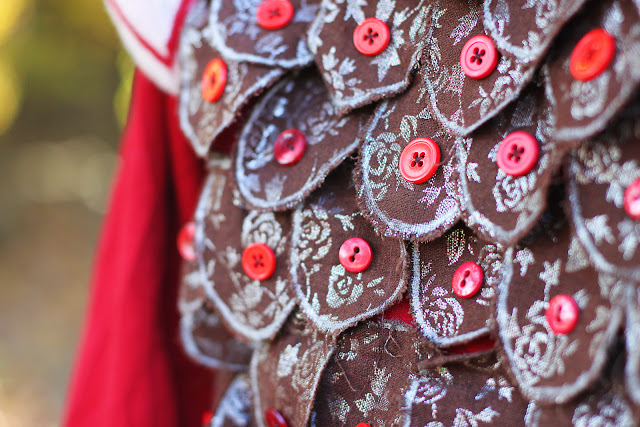 And Miles... oh Miles.   Plumpy?  or Gloppy?  And wouldn't he make a most adorable Lord Licorice?  But it was not to be.  His heart was set on being "Pwincess Lolly", and there was no talking him out of it.  So, in the spirit of 'let's-make-it-work', Amber and I brainstormed idea after idea of how to turn Princess Lolly a little more Princely.  My favorite part of his costume?  The hand-painted candy barrettes clipped into his red Afro. 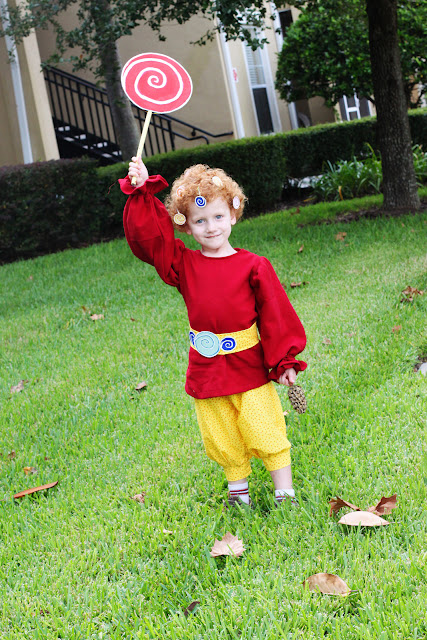 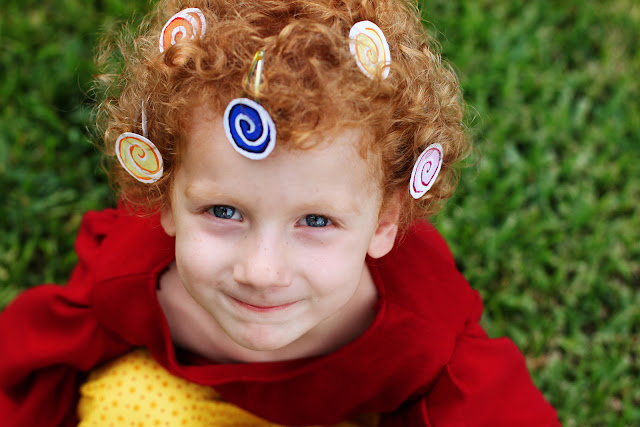 Amber made a perfect Mr. Mint... and her costume was super fun to put together.  We used so much fabric in her shorts that they ended up looking like giant Grandma panties before we put all the elastic in it to gather it up.  Oh where, oh where was my camera?  So many laughs. 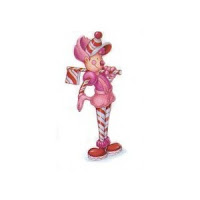 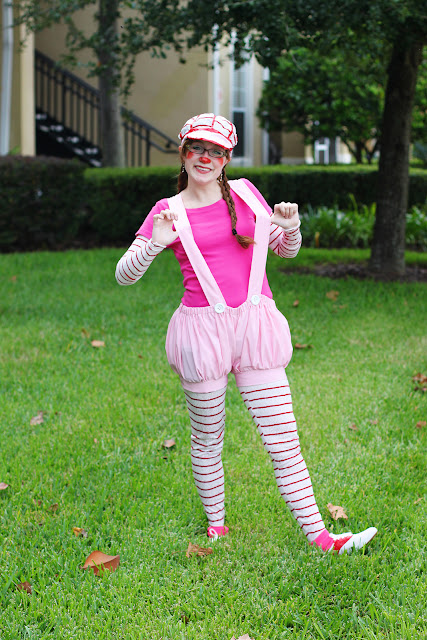 Amber and I felt that Brian should unquestionably be Lord Licorice... what with the tall and skinny look going on there (and wouldn't I have made a delightful Gramma Nutt?... what with the plump and round look going on here) But, though he was willing in the end, I could tell he really, really didn't feel comfortable with the idea (he never has been one to dress up much), so we let him off the hook and he and I went together as the candy kids.  A white shirt, a little red duct tape, and we were good to go.  Definitely the easiest of the bunch, even if it wasn't the most fun. 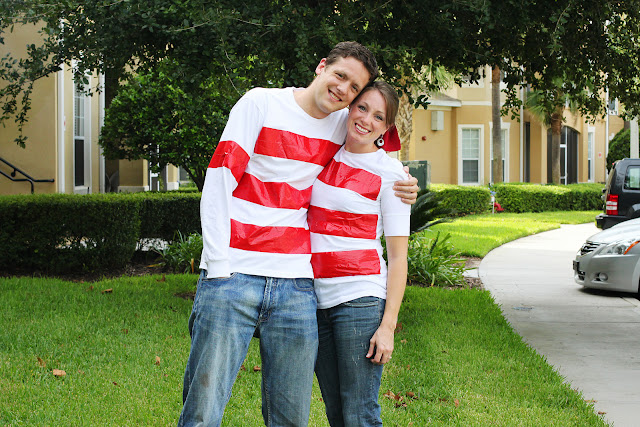 And, too bad several people in the park shouted, "I found Waldo!" in our direction.  Maybe I should have searched harder for denim overalls.

Well, after the costumes were (mostly) finished, it was time to pile our six bodies, all the luggage, snacks, costumes, and Harry Potter CD's into the car to make the long drive down to Orlando.  I set Brian loose with a task to 'string a piece of yarn from one side of the car to the other and attach something to it that can move along to show us how far we've gone and how far we have to go.'  I laughed out loud when I saw that his construction included duct tape, screws and those little plastic things that hold the screws into drywall.  I was thinking more along the lines of a paperclip...  I sure love that man. 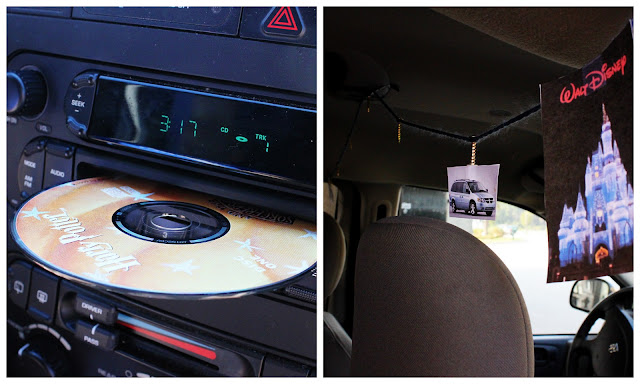 The visual was a huge hit (thanks to a great friend who suggested the idea) - every 100 miles we'd move the car along to the next screw and pull out a snack.  They were in love with the idea. I'm pretty sure it was because the word snack was involved.  Well, Kenz and Carson were, anyway. 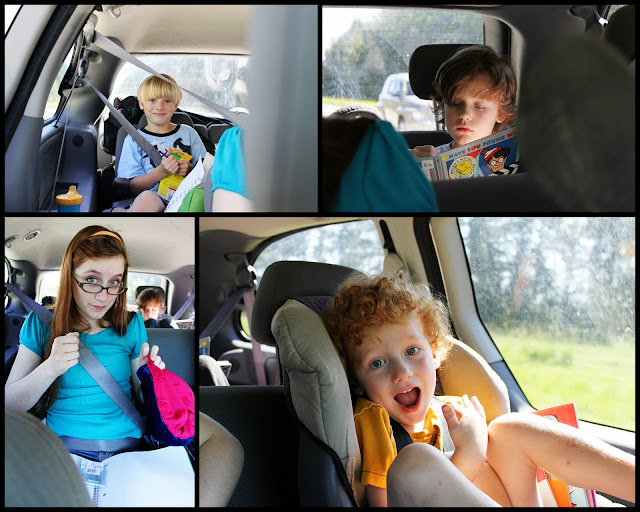 Once we got to the condo we spent the first day and a half in the (amazing) pool, running along the sidewalks chasing lizards, watching movies, eating, and trying at each meal with a Herculean effort to keep the glass dishware provided in our condo from shattering on the floor. 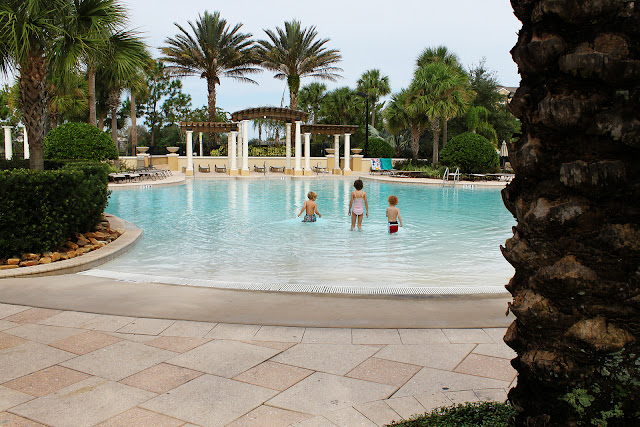 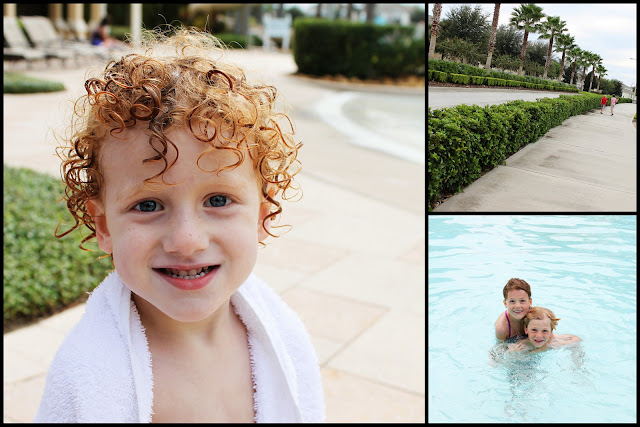 Finally it was time to go into the park.  Amber and I felt strangely elated whenever someone would recognize us as the Candy Land crew.  We relished in the few shout-outs that came our way. 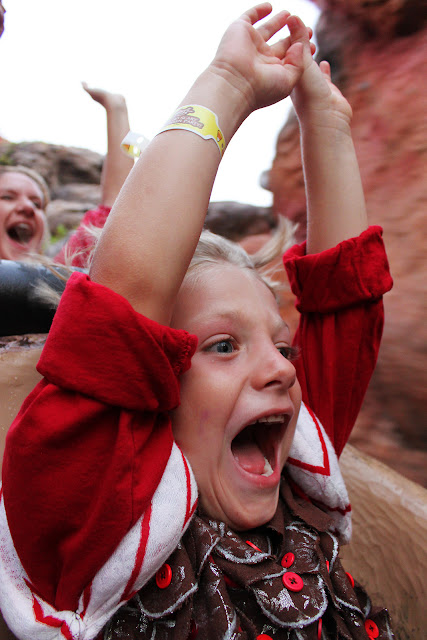 No lines, people.  Seriously, no lines.  I think that's the best thing about Mickey's Not So Scary Halloween Party.  Ever wanted to ride Splash Mountain enough times in a row that you could have plenty of tries to figure out the perfect camera position and the perfect time to snap the shot?  We didn't even have to get out of the log - they just kept sending us through. 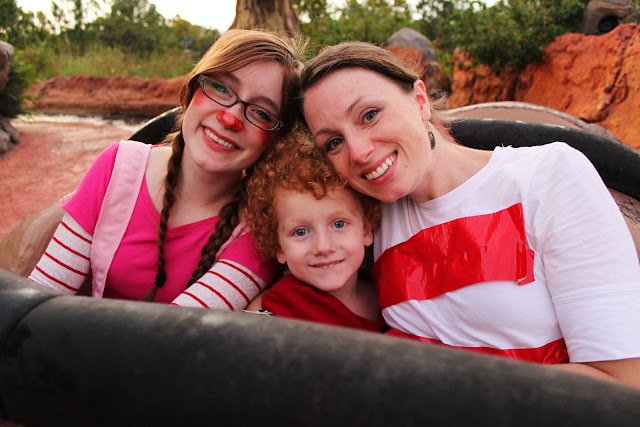 My favorite shot of the night.  Not because of my extra pudgy cheeks, but because of my beautiful sister and because of that sweet little boy holding onto me for dear life.  He was brave, but not a fan of Splash Mountain.  After the first little drop, he slid his back hand behind me and brought his front hand around my expanding tummy to hold on for the next one.  I loved feeling his little squeeze every time we dropped again.  He'd laugh nervously at the bottom of the drops, but never let go until the very end of the ride when it was time to stand to get out of the log.  He felt so tiny wrapped up in my arm, and I know how preciously limited those days are - - - love that little guy with my whole heart.

We rode rides and ate free candy and watched shows and parades and fireworks up until the park closed at midnight.  And then, with very tired and happy kids, we rode the ferry back to our car, drove back to our condo, and tucked our kids into their beds to dream of Disney villains and Halloween parades.