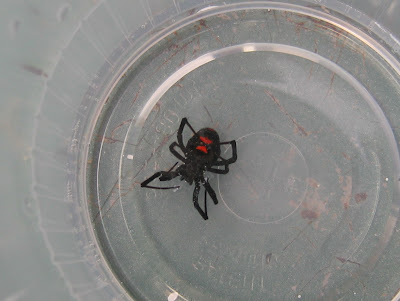 This is the THIRD Black Widow spider we've killed around our house this summer!
I have this major aversion to smashing spiders...well, all bugs actually (something about the 'crunch' gets to me). So you can imagine my terror when I found the first one lurking outside our front door one morning after Brian had left for school. Usually, when I see bugs or spiders crawling around on my floor, I just turn my head the other way and pretend that I never saw them. (Unless Brian is home, of course, then I make a big deal of it until he ... ummmm ... disposes of it.) But I couldn't just ignore a Black Widow and let it sit around - so I stared at it for a full minute while I tried to decide how to get rid of it. Smashing it was out of the question - even with someone else's shoe - seeing how her bum itself was the size of a large marble. So I ran inside to look under my kitchen sink for something toxic ... BLEACH! I emptied about half of the bottle on the spider, and then kept checking on it every minute or so to make sure it didn't ever move again. It was dead - in the middle of our front porch - and that's where it stayed until Brian came home.
posted at 6:39 AM