If you go to San Francisco, make sure you pack a sweater 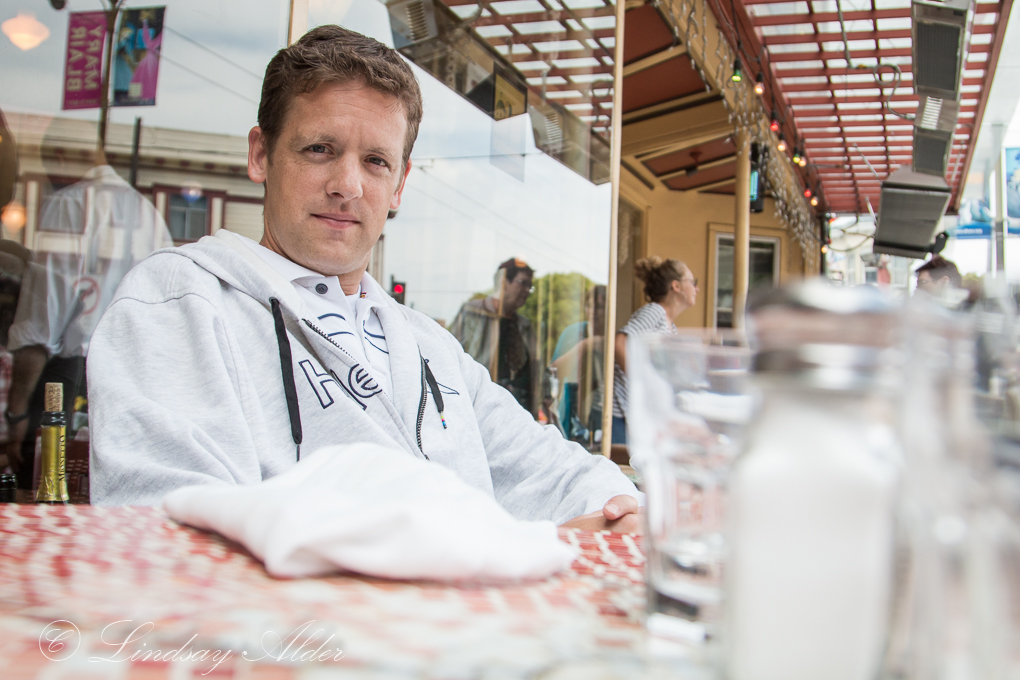 My mind is often a frenzy of thoughts.  Fragments and colors.  Patterns and strings of words... it's a mess, actually.  And when I sit to write, I get so much satisfaction in turning those jumbled images into useful words that capture the moments of my life in a way others can understand, and sometimes even relate to, and in a way I'll be able to relate to later in life.

Just now, as I sat to record our San Francisco vacation, I had all the frenzies I usually have - fragments of paragraphs sputtering around and varying in their opacity.  Shapes of phrases, patterns of analogies, colors of happiness, memories of feelings... but then I uploaded this picture of Brian and everything. just. stopped.  I love this man, you guys.

We've been so lucky throughout our marriage... we've had friends through it all that have been happy and willing to swap babysitting for days at a time, and the older I get the more I see how fortunate we have been in that.  Our relationship is most certainly built by the small choices we make on a daily basis, and has been largely shaped by our children, but it's also been shaped by pockets of time where we forget our 'daily basis', leave our children in the loving care of another, and simply Be Together.

It's that face that gets me.  And the feeling behind those eyes.

I try to always think in the present in terms of our relationship because, as much as I want to ignore it sometimes, now I understand on a greater level the precariousness of this life - of his life - but sometimes I can't help myself and find that my thoughts are hoping for the future.  That face, and the soft, tender, understanding way he looks at me...  I so want to be sitting across from that exact face when it's old and wrinkled.

Whew.  Anyway.  Let's get the frenzy back on. 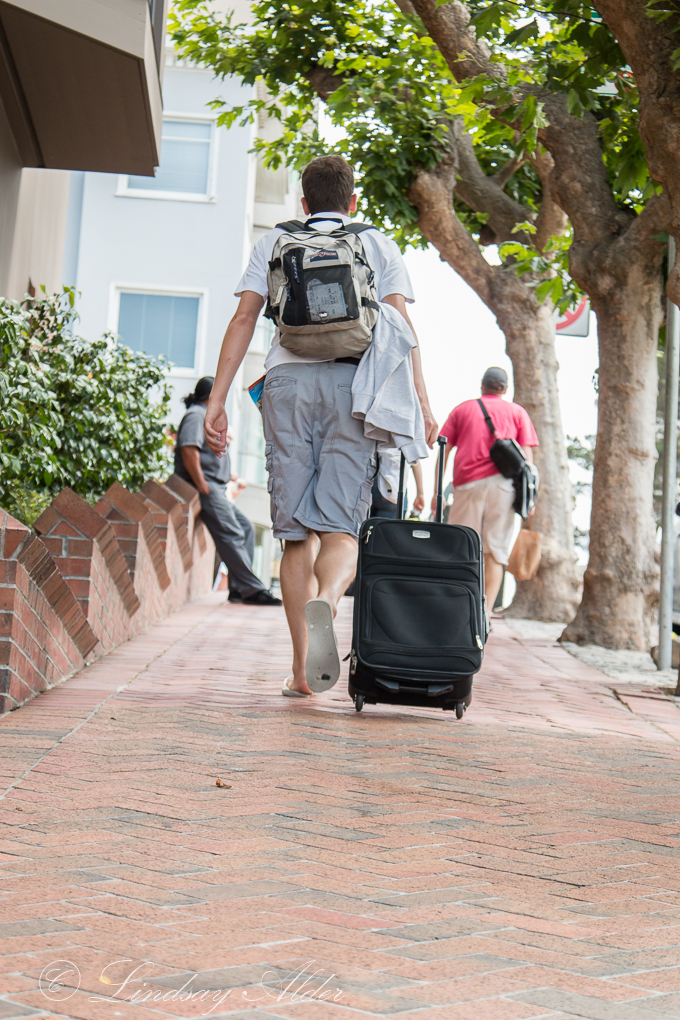 Apparently it's common knowledge that in traveling to San Francisco one should pack a sweater.  In fact, a quick Google search brought me to a site where 5 of the first 6 items listed had to do with 'warm clothing' in one way or another.  Layers, raincoat, sweater, jacket, foggy weather clothes... unfortunately, we didn't think to do a quick Google search before we got on the plane.  So just minutes after we unloaded from the airport into the shuttle, we keyed 'Ross Dress For Less' into our phones.

After purchasing a couple of light jackets, we were much happier.  Good thing, too, because being grumpy would not have served us well as we hauled our suitcases all over the hilly terrain of San Francisco.

Really. All. Over.  We couldn't check into our hotel for seven hours after we arrived in the city.  So our bags went sight seeing with us that day.  I found it rather amusing.  Then again, I was the one taking pictures while Brian was the one doing all the pulling. 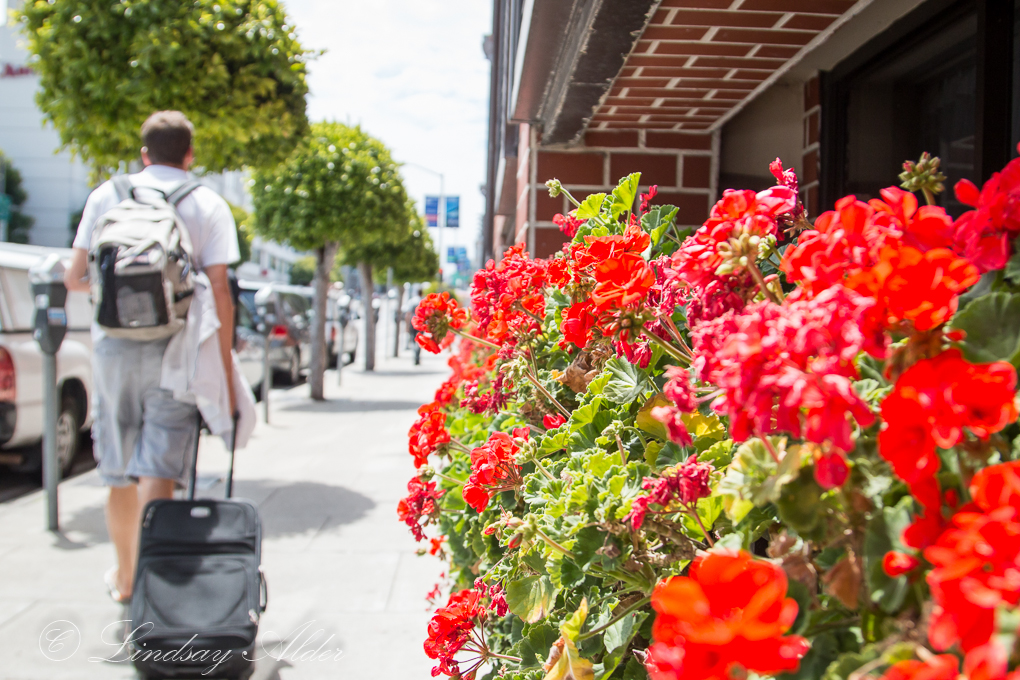 Anyway, like I said.  Good thing we weren't grumpy.

It was also a good thing that I didn't get hit by a car or trolley as I took this next shot. Also that the group of teenagers that watched me and then decided they wanted to get the same shot didn't get hit either (teenagers running out into the middle of the road - sheesh). 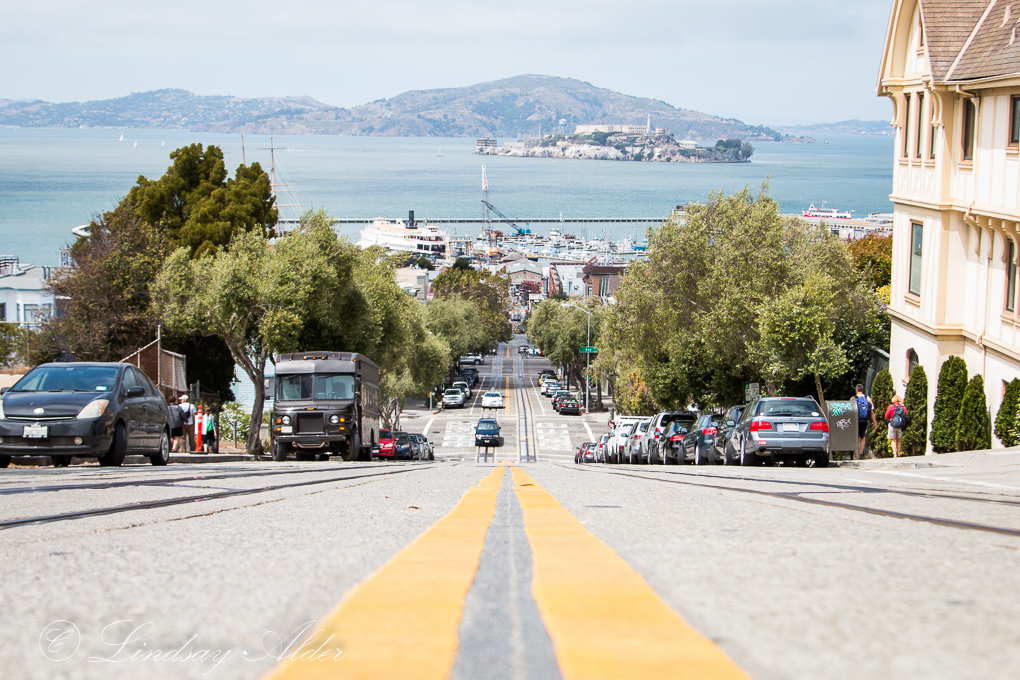 It was a rather unfortunate thing, however, that I was wearing my trusty, black, weareverysingleday skirt because skirts, wind, and crouching-on-the-ground shots are a rather uncomfortable combination for the skirt wearer.  And probably for everyone who happens to be watching the skirt wearer, too.  Sorry people. 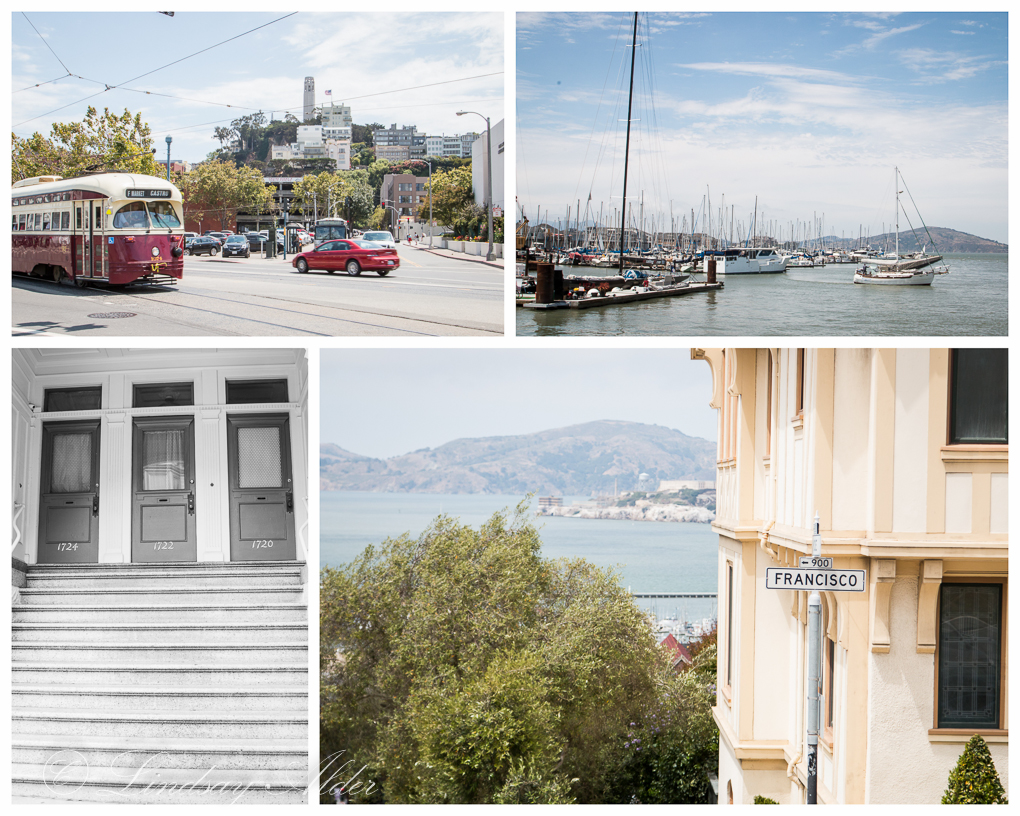 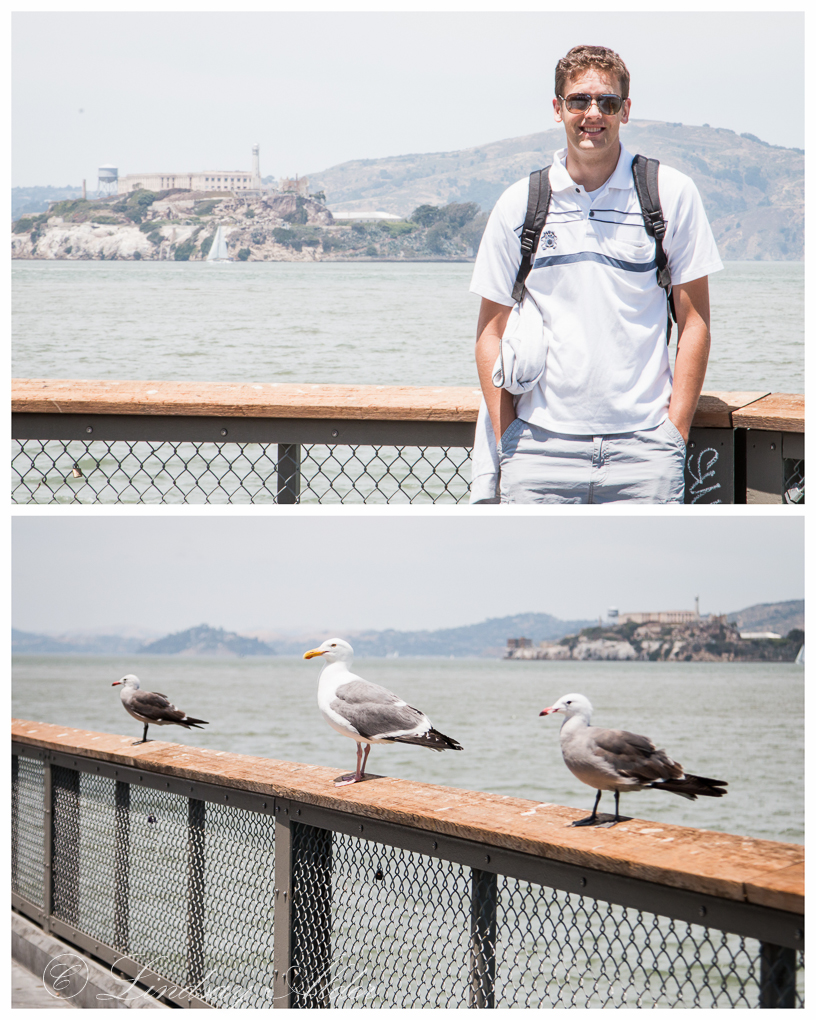 That evening we ventured out to grab a bite at the Comstock Saloon.  It was such a funny place where we had at least three quirky waiters waiting on us, and the food was great.  Also, this bartender looked like he was straight out of a history movie, so I had to take a sneaky picture of him.  Brian may have rolled his eyes a little bit when he heard the faint shutter sound ('Linds!', he whispered. 'Are you...!? What are you taking a picture of?!'), but he secretly loves sneaky pictures too. 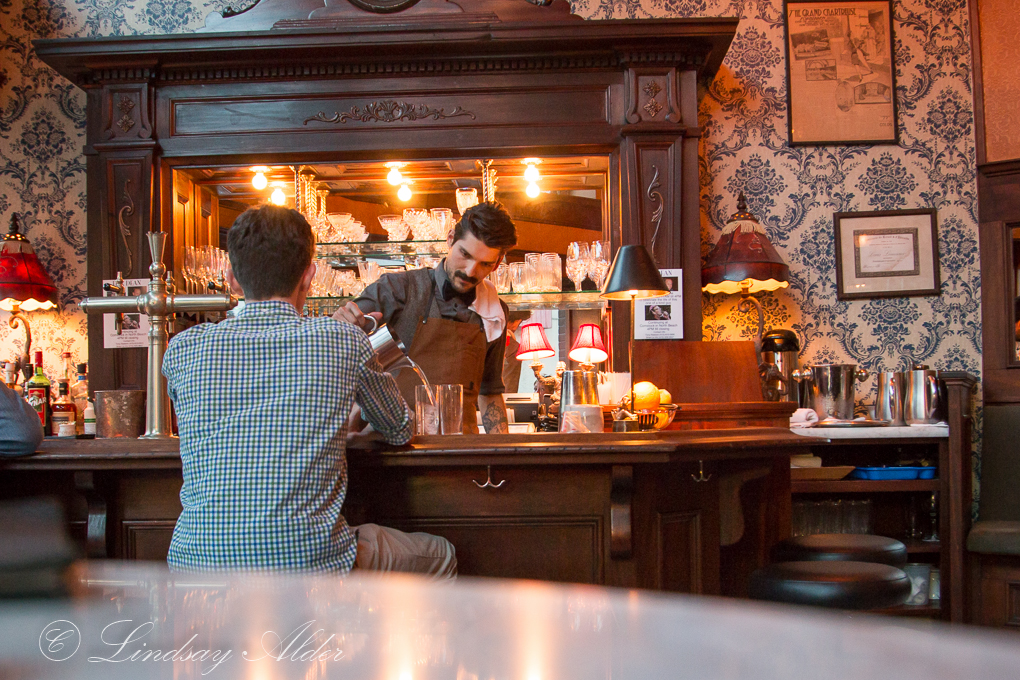 The next morning, Brian and I waited in line for two hours in order to eat breakfast at Mama's.  This was highly uncharacteristic for us because we're the type of people who find another restaurant if the wait is much longer than a blink.  Probably because one of us gets reeeeeeeeeally grumpy if she he or she is not well fed.  But hey, we had no kids!  Live it up, I say.  And by 'live it up' I guess I mean stand in a line for two hours. 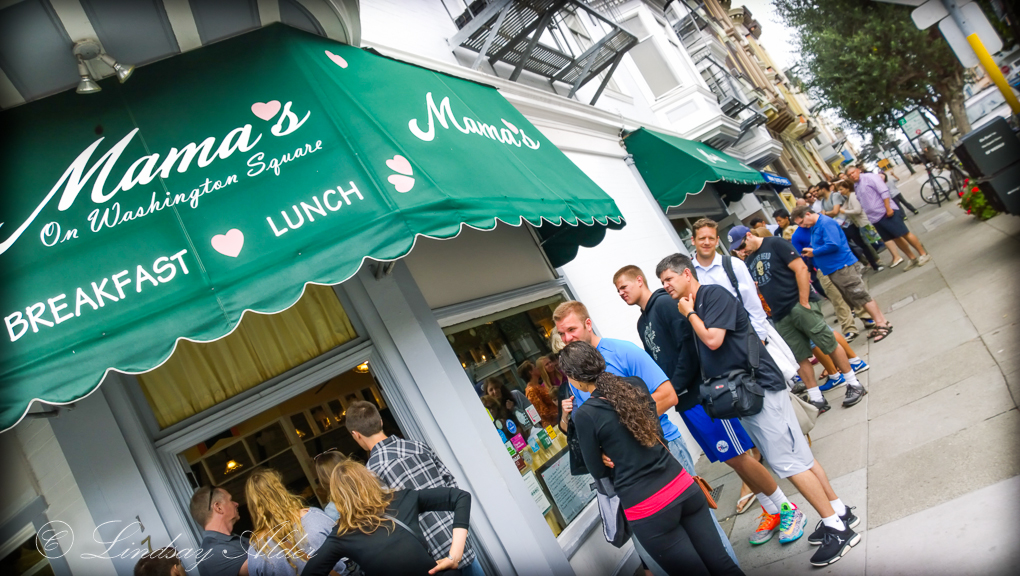 Once we finally made it inside the tiny breakfast cafe, we decided we had to order three different breakfasts, as well as juices and hot chocolate. To try them all, you see. Plus, we were starving.  As I handed my credit card over, I began to see the wisdom in making people wait so very long in line. 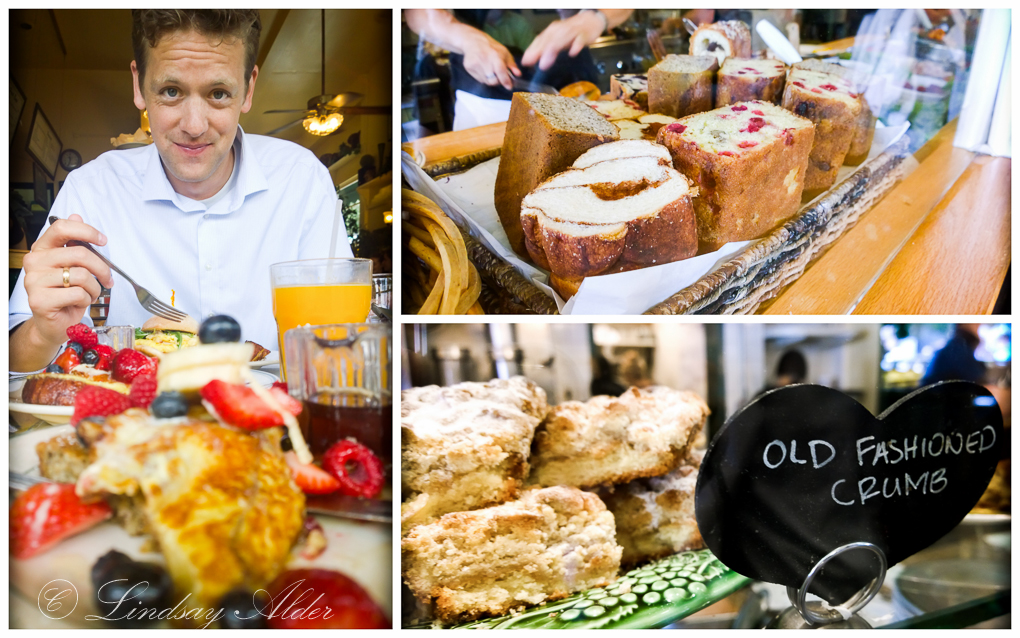 Okay, tell me if you think this is manipulative: while we were there, we happened to notice that as the waitresses were clearing the tables, they would strategically place the tip they had received in a visible location on the table and then leave it there.  Minutes after the next group was seated, they would come back and tactfully pull attention to themselves as they slipped the tip off the table and stuck it into their aprons.  A bit manipulative, right?

But then, we watched as two waitresses cleared off a large booth table and saw them start grumbling to each other about the size of the tip that had been left for them.  So one of them fished around in her apron to pull out a wad of cash (that included two ten dollar bills!) and added it to the obviously less-than-satisfactory tip that had been left for them.  Then they brought the next group in, seated them, and minutes later came back for the now giant tip!  It was enough to make me want to leave a less-than-satisfactory tip myself (just to prove I wasn't being manipulated, you see), but Brian is the tipper of our family and he didn't quite see it the same way I did.  So he left a fair tip anyway.

That afternoon, we welcomed some of our dearest friends and toured Alcatraz together.  I had been on the tour once before as a child, but it was much more fascinating as an adult. 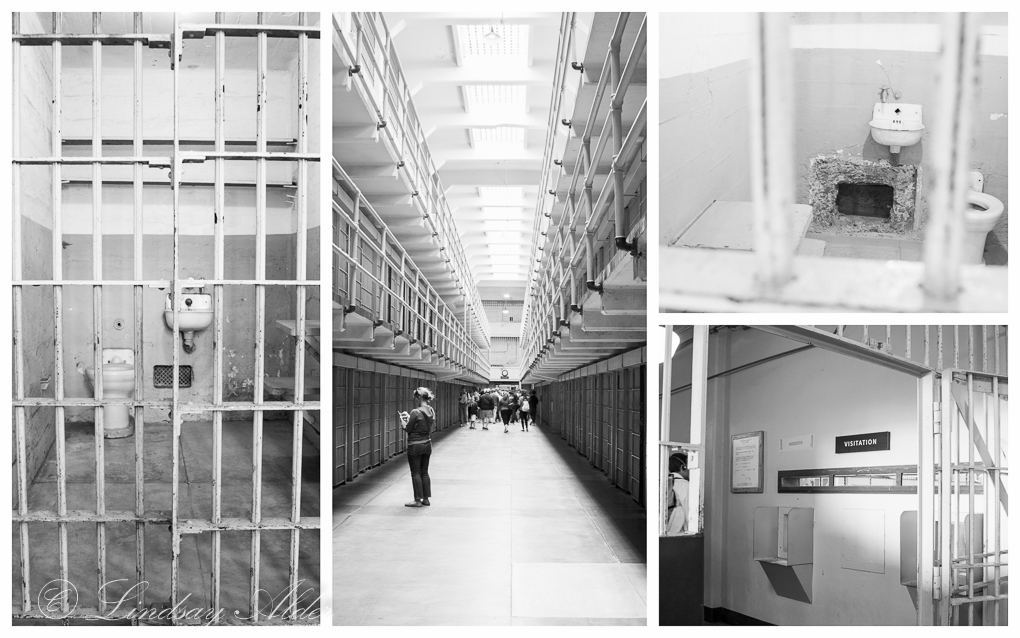 Afterwards, we all took turns in the car changing into fancier clothes (read: jeans instead of shorts) before heading to an amazing restaurant called Wayfare Tavern to stuff ourselves with delicious food.  We then went to the San Francisco playhouse and watched Into the Woods, which I found highly entertaining and delightful.

Remember how I gushed about Brian up at the top of this post?  Well, I could recreate a similar gushing about these awesome friends we spent two days with.  The Aldriches are some of our very dearest friends and being with them is always so fantastic.  When you've been through the ups and downs and ins and outs of a years-long friendship, there is not much that feels safer.  They didn't even make fun of my super-yellow hair (oops). One of the greatest things about moving west is being closer to where they live in California (though, not quite close enough, in my opinion).

The next morning we all woke early and rented bikes for the day to bike around the city (huff, puff, up, those, hills, holy, cow, dying, burning, out, of, shape) and, maybe my favorite part of the whole trip, across the Golden Gate Bridge and down into a little valley called Sausalito. 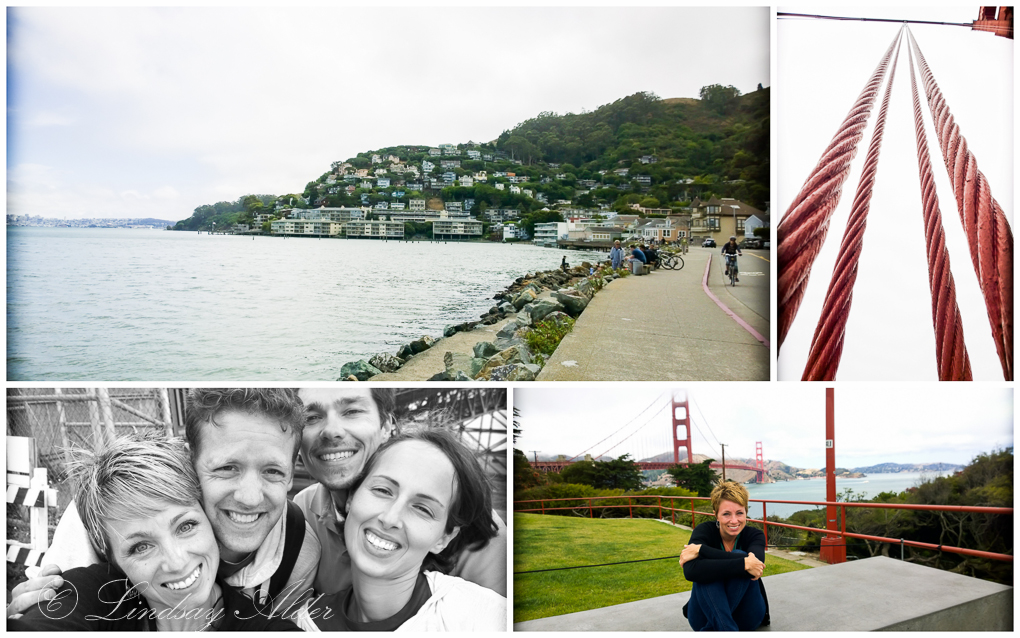 Huh.  I just realized I didn't choose any pictures where you could actually see the bikes... but they were there, I promise.

After biking all day, we had another amazing dinner at Flour and Water (okay... does anyone else think this is a terrible name for a restaurant?  I understand the art of simplicity here, but after a long day of biking I have to admit I was a little apprehensive that I would be getting nothing more substantial than paste.  Thankfully you can't always judge a restaurant by its name).  And then the Aldriches drove us to the airport where we said our goodbyes and caught a flight back home to our kids.

I love spending time with Brian, and having days of uninterrupted conversations with each other and the Aldriches was blissful - but we were sure happy to see those sweet, small faces again. 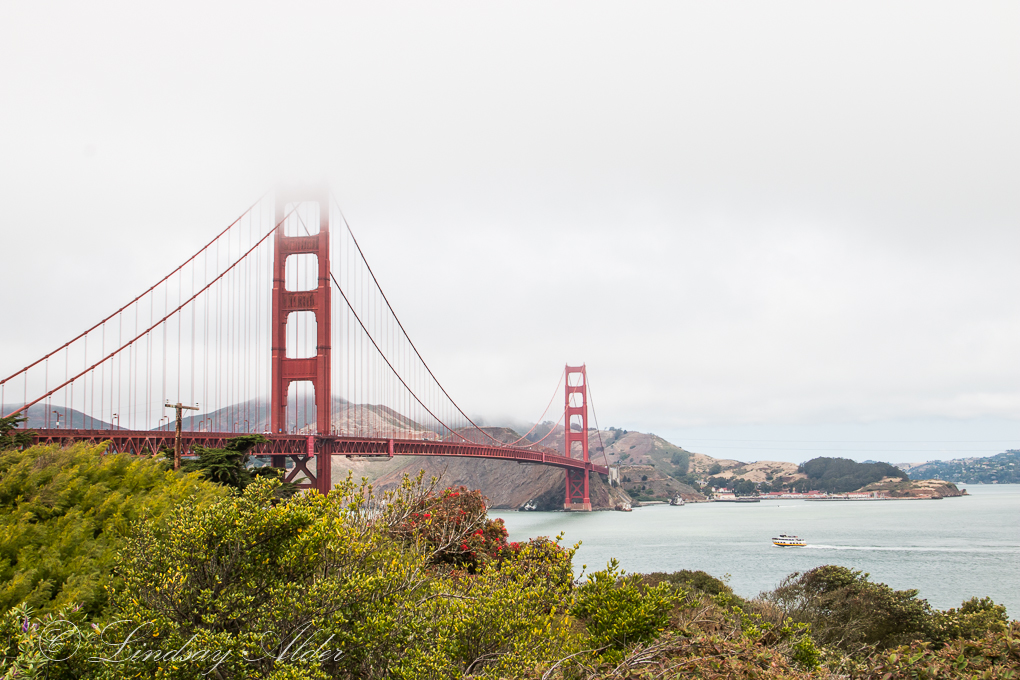