I broke a sweat walking to my car yesterday.  Actually, let's back up... I broke a sweat right after I opened the back sliding door in preparation to walk to my car yesterday.  I was blessed with Go The Extra Mile sweat glands (and if you're wondering how I can say I was blessed with them, I'm still trying to figure that out myself.  There's good in every situation, right?  So, here I am, faithfully searching for the good in this one).  Really, it's not as bad as it could be.  The ambitious sweat-glands tend to be accumulated in my armpits, the palms of my hands, and my feet... leaving the rest of me on a more normal 'glistening' scale.

This embarrassing secret used to consume much of my life. I spent my teenage years with my elbows dug into my waist while in public, or sticking straight out with the a/c blowing while in the privacy of my own car.  I've been known to blow-dry my armpits; my mom sewed sweat protectors (did you even know those existed?) into my prom dresses, and my wardrobe consisted mainly of dark colors and patterned prints to hide what they could.  And oh, my sweaty palms.  I lived in fear that someone would extend their hand for a handshake before I'd had a chance to discretely prepare myself with the wipe-my-hand-all-the-way-down-the-length-of-my-jeans-and-back-up-again move.  My normal palms were bad enough, but if ever I got nervous about something, oh boy; and if I stayed nervous for more than a half hour (waiting to give a talk in church, waiting to play my piano piece at a recital, waiting to go on-stage for a solo...) I could watch the sweat collect in the palm of my hands until I had an ant-sized recreation pool smack in the center of them, with pruney fingers shielding it on all sides.  Really, they were actually pruney.  I wished my antiperspirant was a little more anti the perspirant, and I fantasized about a surgery I'd heard of where they could go into your wrists and snip around at something to reduce the sweat production in the palms of your hands...  I had several Most Embarrassing Moments that I owe to this anatomical issue - the worst involving a stinky feet smell that filled the entire auditorium after I took my sandals off to join my bare-footed friends on stage.  Actually 'stinky feet smell' might be misleading... the smell was thick, deep and pungent enough that my peers were, I kid you not, buckling over in laughter, one hand across their waist and the other one plugging their noses or waving away at the air in front of them. It interfered greatly with the choreography we were trying to learn, so, with my face burning hot all the way to the tips of my ears in embarrassment (I also was blessed with Go The Extra Mile blushing glands), I quietly slipped off-stage and put them back on my feet.  The next time I took them off, I dropped them straight into the garbage bin.  Whew... that was a terrible memory.  Thanks for bringing that up.


Anyway - the years have tempered the sweatiness.  But, I still only use lotion on the backs of my hands (I look a bit like a seal as I put lotion on, I imagine... you try to put lotion on your hands without getting any on your palms!), I have the softest feet you've ever felt, and I've decided to simply not be embarrassed by the damp (wet) circles that are frequently under my arms... but it's definitely not as bad as it once was.  Even so, as I slid into the drivers seat yesterday after merely walking across the driveway and felt that familiar sticky feeling, my heart sank and I realized the Dreadful:  summer is coming to North Carolina.


But lets not focus any more on that.  Let's instead turn our attention to the awesome beauty of spring in North Carolina and talk about the fun you can have! 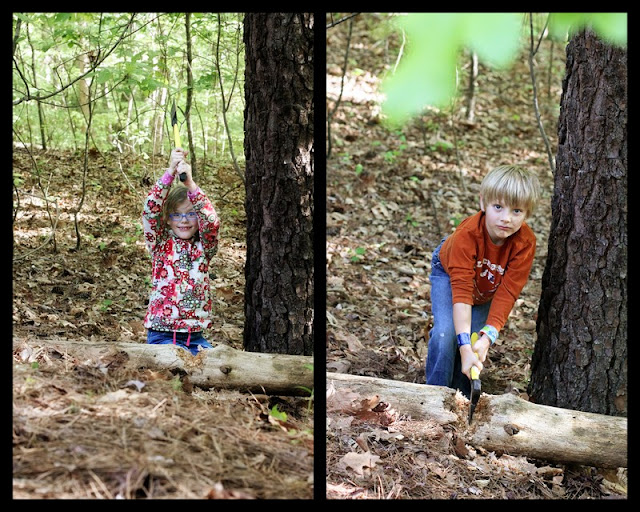 Brian found this hatchet in the woods on one of our camping trips (if you lost a hatchet on one of your camping trips, sorry... we'd be happy to sing Finders Keepers, Losers Weepers to you if it would help). It has become a beloved member of our family.  In fact, on our last camping trip, this was the only thing Brian packed.  We ended up forgetting the hot dog buns, paper towels, paper plates, and flashlights.  Granted, I was the one who was supposed to remember the rest... But we had the hatchet, so... plus. 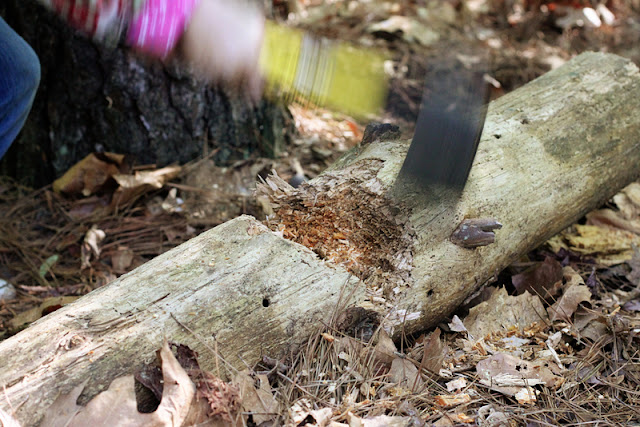 If you want to know what it's like to have your heart stop several times in one minute, I'll lend you this hatchet and you can watch your kids hack away at a log.  But you have to promise to give it back.


#2 - You can pick your own strawberries 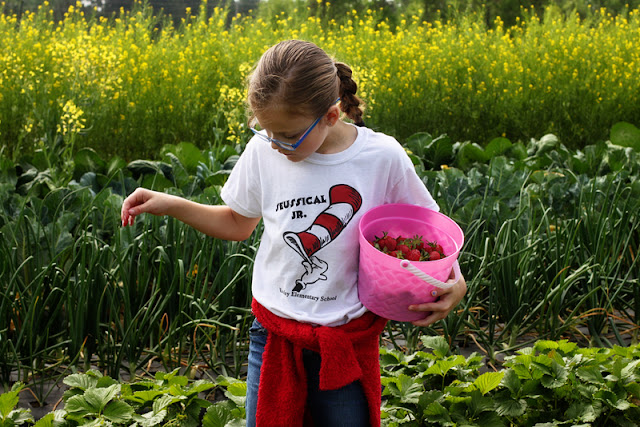 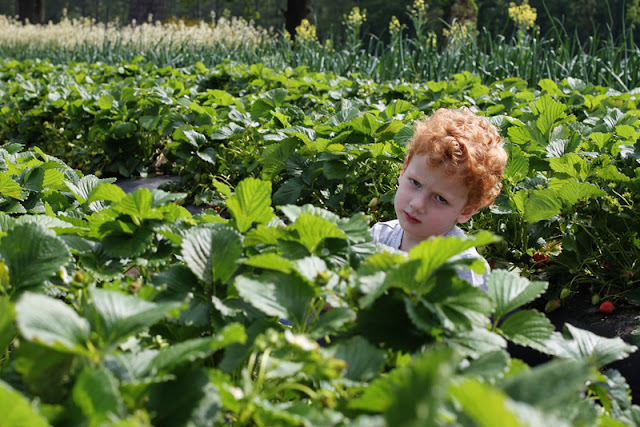 This is Miles's 'stop taking pictures' face.  It didn't work. 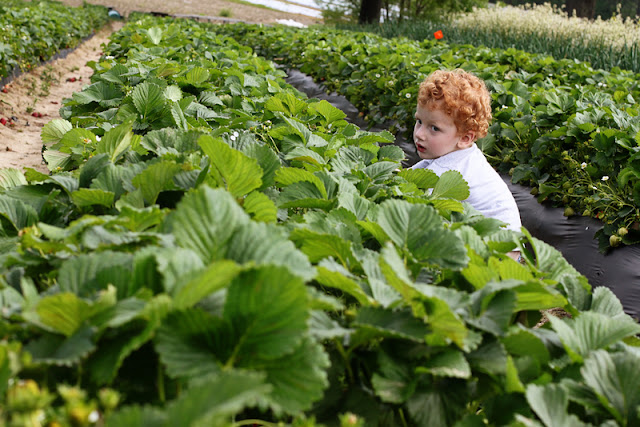 #3 - You can eat homemade strawberry ice cream after you're done picking. 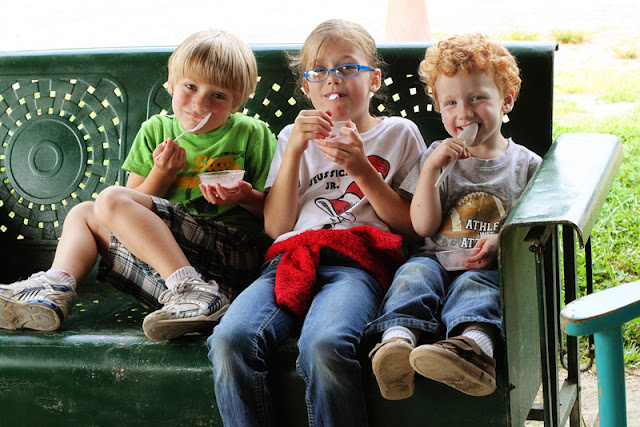 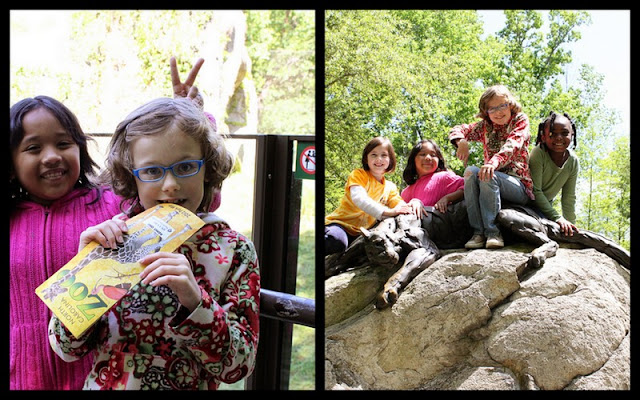 I love the picture on the right because I unintentionally snagged McKenzie and her three BFF's: Millie, Cristella and Jasmyn.  Well, technically Millie is her BBFF, which apparently means best-best friend forever.  I learn so much from my children.  The panther Kenz is sitting on is a pretty good friend, too... but he doesn't rank high enough to qualify for BFF. 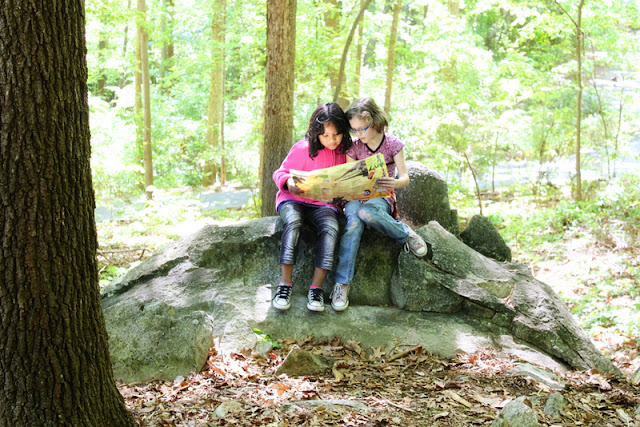 McKenzie insisted on being the 'mapist' while we traveled around the zoo.  She and Cristella took the job very seriously and we only got lost once. An hour. 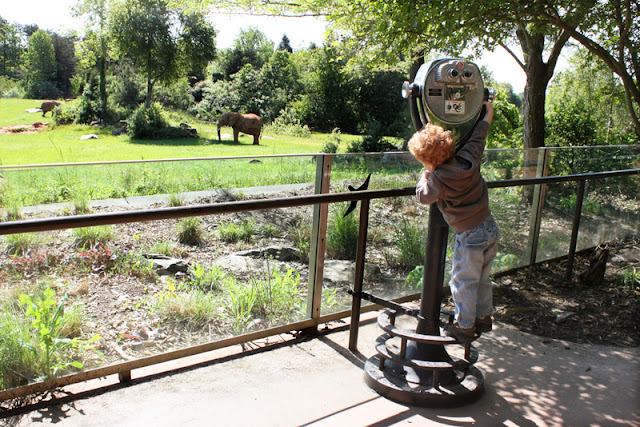 Miles is spying on his archenemy. He's pretty sure we have an elephant living in our house somewhere ready to creep out of the corner and eat him.  He doesn't seem to understand the faulty logic behind that fear.  Once I stepped out of the shower to find him huddling behind the toilet with the bath mat covering his little body... after I threw up a little in my mouth at the sight of the bath mat around his chin, I calmly asked, "What are you doing, bud?"
"I hiding. A eff-a-nunt isss com-een."
He was not joking.  Or playing.  He had even shut and locked the bathroom door behind him. 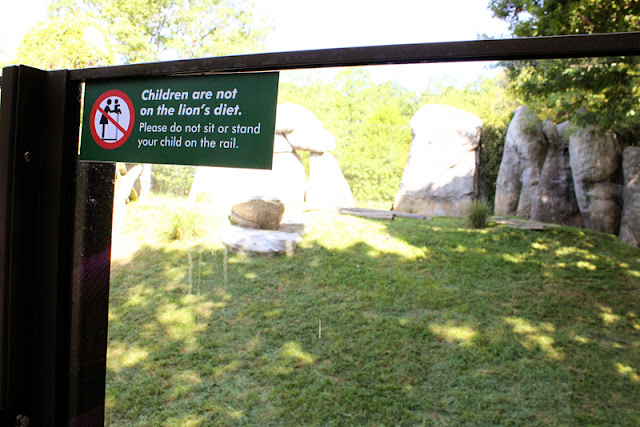 I personally think a lion would be a much more realistic fear. 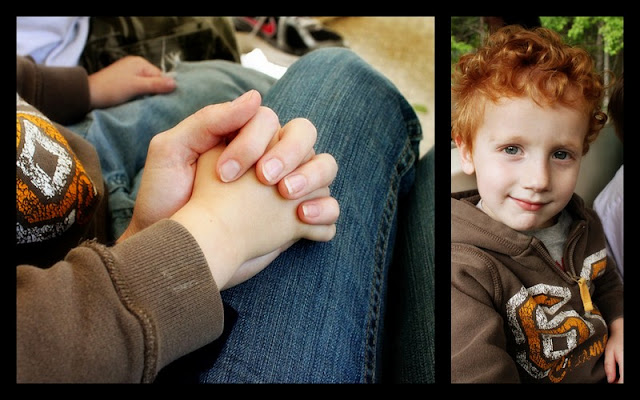 Miles was a trooper the whole day.  I love those little tired eyes in the picture to the right... this was taken at the end of our exhausting day.  Riding the tram was Miles's favorite part of the whole day, and we got to do it twice.  The second time, he insisted on holding my hand so he didn't 'fall offa twam'  I happily obliged.

Spring, you may be on your way out, but we have loved you so.  I will dearly miss you through the long summer!