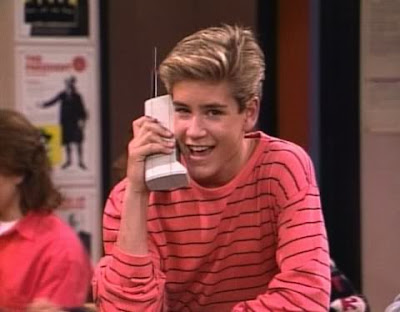 I remember the first cell phone my dad brought home. It was literally the size of a brick but somehow managed to look quite chic in it's black case hanging off of his braided belt. When it rang, he would unclip it and gently raise the antenna before speaking. This antenna-pulling is a faint memory of mine... so faint that it prompted a text to my dad to make sure, "Didn't you have to pull an antenna up on your first cell phone? Am I remembering that right?" His response, "Yes. The first two or three of them." Now my cell phone is small enough it consistently disappears inside my purse, causing slight chaos and frustration when I can hear it ringing, but can't seem to grab on to it... and many times, in my search, my finger brushes the touch-screen just right, answering the phone before I even know exactly where it is...

-------------------
Miles and I were scrolling through the pictures on my blog today, pausing at each one for him to exclaim "Teh-nee! Cahsn! Mie-yuls!" Going through pictures is one of his favorite activities, and I can generally get a lot of work done in the ways of sifting through, deleting, and renaming pictures while Miles sits on my lap for the slide-show. It doesn't bother him if I go back through the same pictures 47 times while trying to decide which ones will end up in the recycle bin. (PS - does anyone else find it odd that the garbage area on a computer is labeled a 'recycle bin'? Really? How, exactly, is my computer going to re-use my thousands of picture files?) Today I didn't have much time to sit in front of the computer, however, so after scrolling down my blog page once, I plopped him down on the swivel chair and showed him how to use the mouse to scroll through the pictures himself. I busied myself by picking up the endless scraps of paper littered throughout the office from one of McKenzie's unfinished craft ideas (which seem to be silently taking over our lives...). Moments later, I looked at him and was shocked, for the millionth time in my life, at how much things have changed since I was a kid... it really hasn't been that long, you know. But, there my baby was, propped up on his knees, face inches away from the computer screen, scrolling away through digital pictures with his pudgy 2-year-old hand.

"Mrs. Alder, do you know how to use the Nook?" I was sitting at the back table of McKenzie's second grade classroom grading papers last Tuesday. I looked up at Ms. M. who was busy with a crowd of kids around her to see her eyes waiting for my response. Her classroom has 5 color Nooks - Barnes and Noble's popular version of a Kindle - and the children seem to enjoy reading from them. I glanced over at the Nook table and noticed there was a bit of commotion; it seemed a few of the children were confused and the assistant, Mrs. R., had just straightened up and shrugged her shoulders in helplessness. "Well, I haven't actually ever seen one before, but I think I can figure it out," I responded. Taking the first color Nook in my hand, I gently ran my finger along the screen to help the first child select a book to read. "Oh my," said Mrs. R. over my shoulder, "you just touch the screen, huh?"
"Yeah, pretty crazy, isn't it?" I said back.
"My, oh, my." She walked away shaking her head in disbelief.

I know where she's coming from. It seems a little futuristic to me, too. But many of those kids held the Nooks with no fear, navigating them with ease. One little girl even made reference to her own Nook at home, and taught me how to get back to the library page. You won't ever see a child of today shake his head in disbelief at a touch screen.
------------------
The days of cell phone antennas were limited from the beginning... Could the days of the computer mouse be approaching the same fate? To me, seeing my 2-year-old's hand guiding it around the mouse pad seemed a sign of how far things had come... But for him, maybe someday he'll look back on a faint memory and ask,

"Wait, didn't we used to use a mouse to guide ourselves around the screen? Am I remembering that right?" 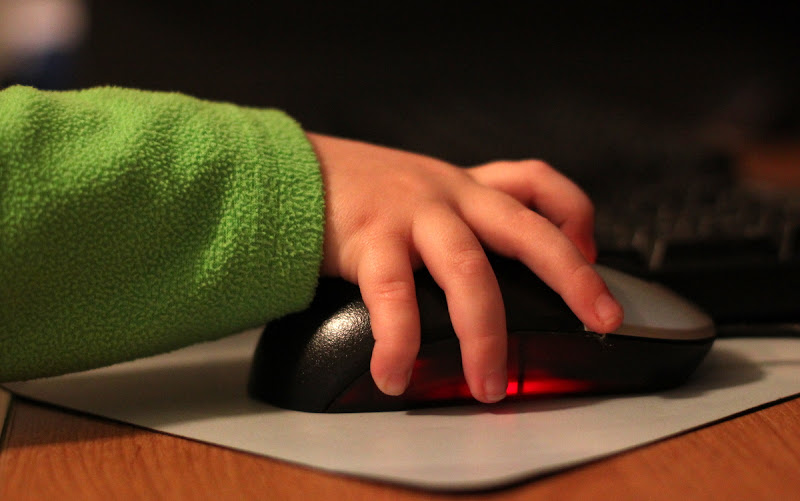