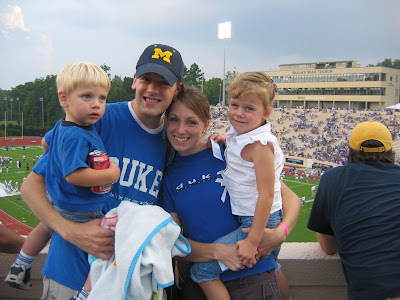 Brian thought it fitting to wear Duke attire and a Michigan hat because Michigan happened to be playing the Utah Utes at the same time...and since the Utah and BYU are major rivals, he felt he wanted to show his support for his home team

I haven't really been excited about football ever since we moved here to North Carolina. Looking at Duke's football team records might give you an indication why...(if I remember correctly, last year they won ONE game, and this year they're picked to win THREE!). But this year, as I've caught little whispers of fall, I've started to feel a little longing for the football that used to be such a fun part of my fall season. Growing up, the turning leaves and crisp air always meant the beginning of football season in our house. For as long as I can remember, my dad has always cheered and yelled for the BYU cougars. Even as a very young child, it was always easy to know when football season had started...my parents would tuck me into bed with hugs and kisses and then, sometimes, I'd feel the floorboards of our house start to rattle with stomping feet and angry yells, loud claps and triumphant cheers as my dad watched the game.

When I was about 12 or 13, he started taking me along to the home games. For the first couple of years, I spent game-time watching the cheerleaders, listening to the band, eating nachos and ice cream, and asking, "What? What happened?! Dad! What happened!?" whenever everyone erupted in cheers or boos. I'm sure he was mildly annoyed with me at times. :) But as I got older, I started to really enjoy watching the game, learning the signs to the calls the refs would make, following the plays and cheering at the right times without prompting. Through the years, I remember sitting there next to my dad - halfway wishing he would participate in the cheers and the wave when it came by, halfway relieved that he wasn't embarrassing me, always thrilled when he turned to me to give me a high five, proud when he taught me the rules in a 'grown-up' voice, grateful that he bought me nachos and ice cream, excited that he'd let me hold the binoculars for most of the game, and feeling so important and loved that my dad would choose me to spend those four hours with (even though he did it for all of us kids).

By the time I became a Cougar myself, I was ecstatic that I held my own set of season tickets - and as I dressed all in blue, pulled my hair back in blue ribbons, painted a 'Y' on my cheek and headed out the door with my friends, I found myself more excited for the game itself than the social interactions that surrounded it. My dad taught me to love football...and I guess it kind of stuck.

But, why are we talking about the BYU Cougars? I guess I got sidetracked in some memories there... Back to the Duke BlueDevils! (Doesn't have the same ring to it, does it...) As I mentioned before, I was feeling a little longing - I guess for all of these feelings that I've just shared - so when my friend, Janet Gammage, mentioned that she was going to the Duke football game, I jumped on the chance to invite myself along. :) 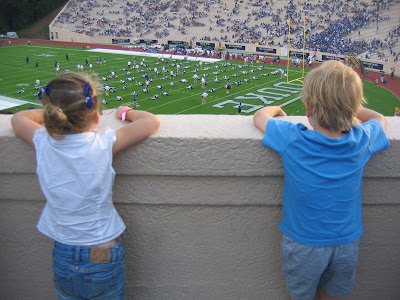 McKenzie and Leo watching the team warm up
We got their early to enjoy some fluorescent pink hot dogs, socialize a little, and grab our seats (which were AWESOME - 5 rows up on the 40 yard line!) Kick-off time was scheduled to be at 7:00, and at 6:45 the band came in to start off the pre-game festivities. It was fun to hear them play the Duke fight song...but it was completely unfamiliar to me and I just wanted to scream, "Rise and Shout, the Cougars are out!" Somehow, I felt that would be inappropriate though...so I refrained. It was drizzling and, upon seeing lightning, the officials decided to put the game on a 'weather delay'. The Gammages decided it would be best for them if they headed out, but Brian and I wanted to stick around for a while to see if it cleared up. It rained hard for a little while, but the kids were SO, SO great! The kids entertained themselves with the camera, food, my glasses, climbing up and down the bleachers, and just about anything else they could think of...and they LOVED it! 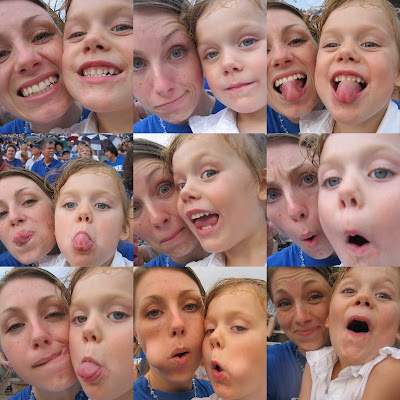 Finally, after about an hour and a half of waiting, the Blue Devils came running out of the tunnel, warmed up again, and kicked off the ball. It was so fun to see my kids enjoying the night as much as I was! Duke did great and ended up winning - though we only stuck around through half-time. (We figured 10:00pm was late enough for the kids to be out!)

Well, I sure miss college sometimes - and right now I miss Cougar football. I miss the loyal fans, I miss the beautiful mountinous backdrop, I miss huddling in blankets with hot chocolate as snow fell around me, I miss shouting the fight song after every scored point, I miss sitting with my dad, I miss walking to the game with my friends, I miss the blue eye-shadow and the white painted "Y" on my cheek...I miss the excitement, I guess. Watching Duke play was fun - and I'm so glad I got to have a small taste of my craving...but I guess nothing can compare to the lifetime loyalty I feel towards BYU.