~
It's true that I miss the snow during winter-time. But I'm beginning to see that there is a good side to having mild winters. So far this year, there have only been a handful of days where I wouldn't venture outside because of the cold temperatures - and that has left a lot of days where we can throw on a jacket and play in the open air! 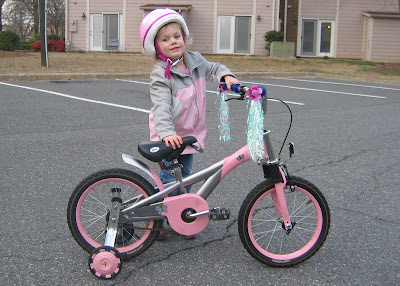 Santa left McKenzie a bike for Christmas this year. (One that was originally blue - notice the fantastic paint job done by yours truly!) She was so excited, and started to pick it up as quickly as a timid, careful little girl could. But after a few nasty falls off the 'cliff' (the curb), she was terrified to go faster than a snail...literally. I kept thinking she'd get over it, but after a couple of weeks, it was still the same. So I finally got my own bike out, strapped on my helmet and invited McKenzie to go bike riding with me. After watching me turn circles in the parking lot for a few minutes, her courage started to return and we went from snail crawling to pedaling faster and faster until she felt confident enough to even turn her handle bars while moving (that was a big issue)! I was so proud of her!