"Well," I said to Brian as we pulled out of our little Miami parking garage for the last time.  We had spent the morning rolling up air mattresses and folding up blankets, pulling what was left from the fridge and the cupboards and stuffing it all into coolers and lunchboxes, checking and re-checking corners and closets and drawers to make sure we had left them empty, standing on the balcony to breathe the ocean air and listen to the calm wind one last time, handing keys and garage gate openers to our landlord... "Let's go then."

Our minivan rolled forward through the crowds along Collins Avenue as we headed north - the ocean to my right, our future to my left - and I took a deep breath.  "You know," I said.  I often say this when I have something to say, but am unsure how to say it.  A way of alerting my husband that I would like to speak, but that I need a moment to collect my thoughts.  He waited patiently for me to form the words, probably expecting me to re-dive into our well worn conversations of how my heart hurt to leave the east... how nervous I was about the future... how grateful I was to have had that year in Miami.  I found the words.

"I kind of feel like we're just leaving a really great vacation."
"...really?" he answered.
"Yeah.  It's so weird.  I thought I would be all emotional... but instead I just kind of feel like 'that was so fun, we'll have to come back again.' And now I feel like we're on our way home."
"...really?" he repeated.
"Yeah. I know it doesn't even make sense because I don't even know what home is."  Brian smiled a tender smile.
"I know what you mean," he said. "I feel that way, too."

And so our journey across the country began.

1 - It turns out that I have a hard time remembering things without writing them down these days. 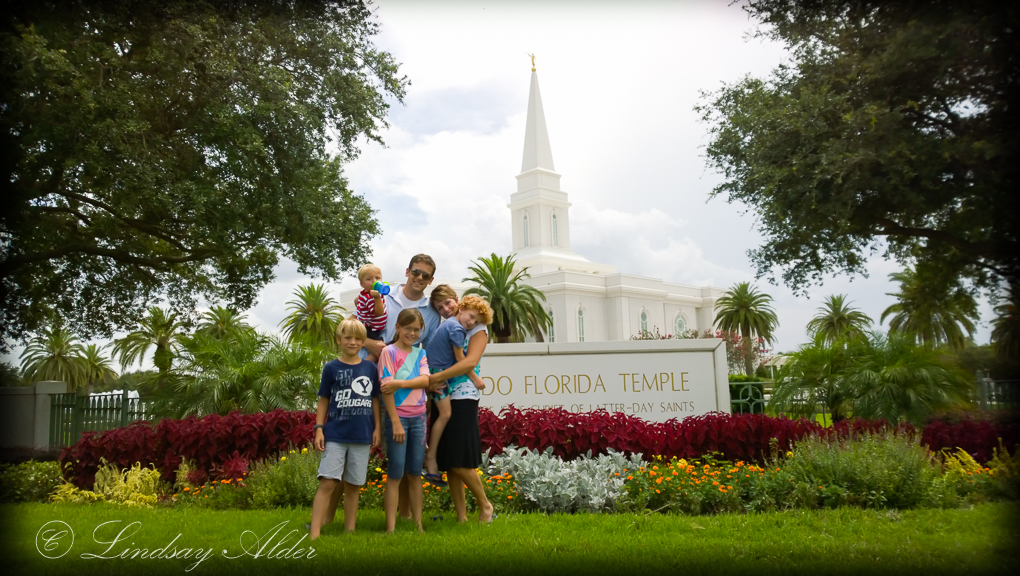 We had plans to stop at all the temples along the route... but since I forgot to write them all down, we forgot several of them along the way.  But we did remember to stop at the Orlando, Florida temple.  Unfortunately, it was closed for maintenance, and even the parking lot was gated.  So, we pulled our car up to the gate and let the kids walk around the outside of the gates for a few minutes.  Just seconds after we pulled in, another van - same make, model, and color as ours - pulled next to us.  Their doors opened wide and four children came sprawling out onto the pavement, shoving crayons and coloring books and snacks back in the door behind them.  Turns out they were a Mormon family from Utah, making a cross-country drive themselves.  We laughed at the parallel lives we were living that happened to intersect for a moment - - - I love that about our church.  Strangers, yes.  But I knew them so well.  God loving, covenant respecting people, teaching their children the same things we are teaching ours. 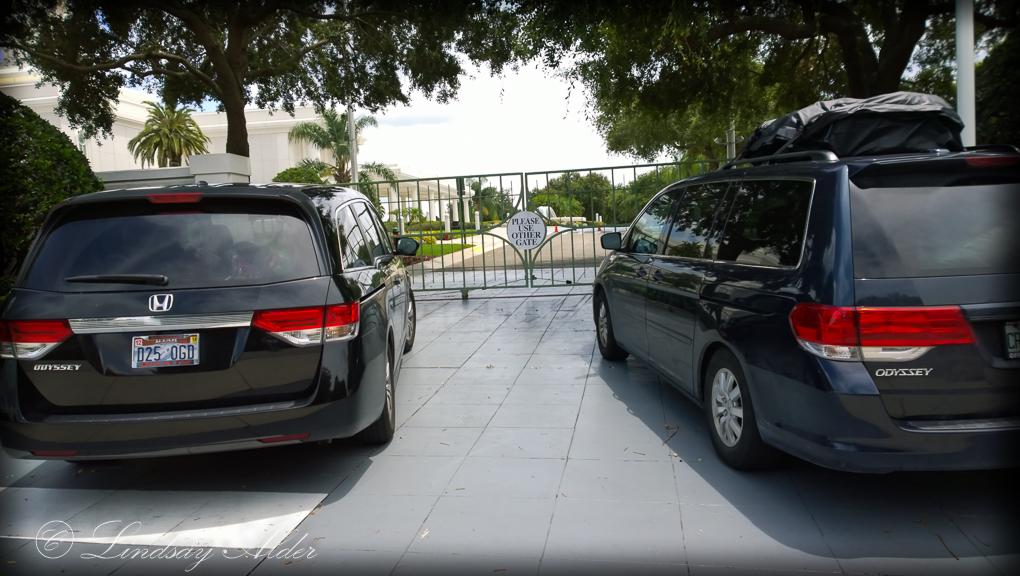 2 - When McKenzie sits in the car all day she gets really hungry. 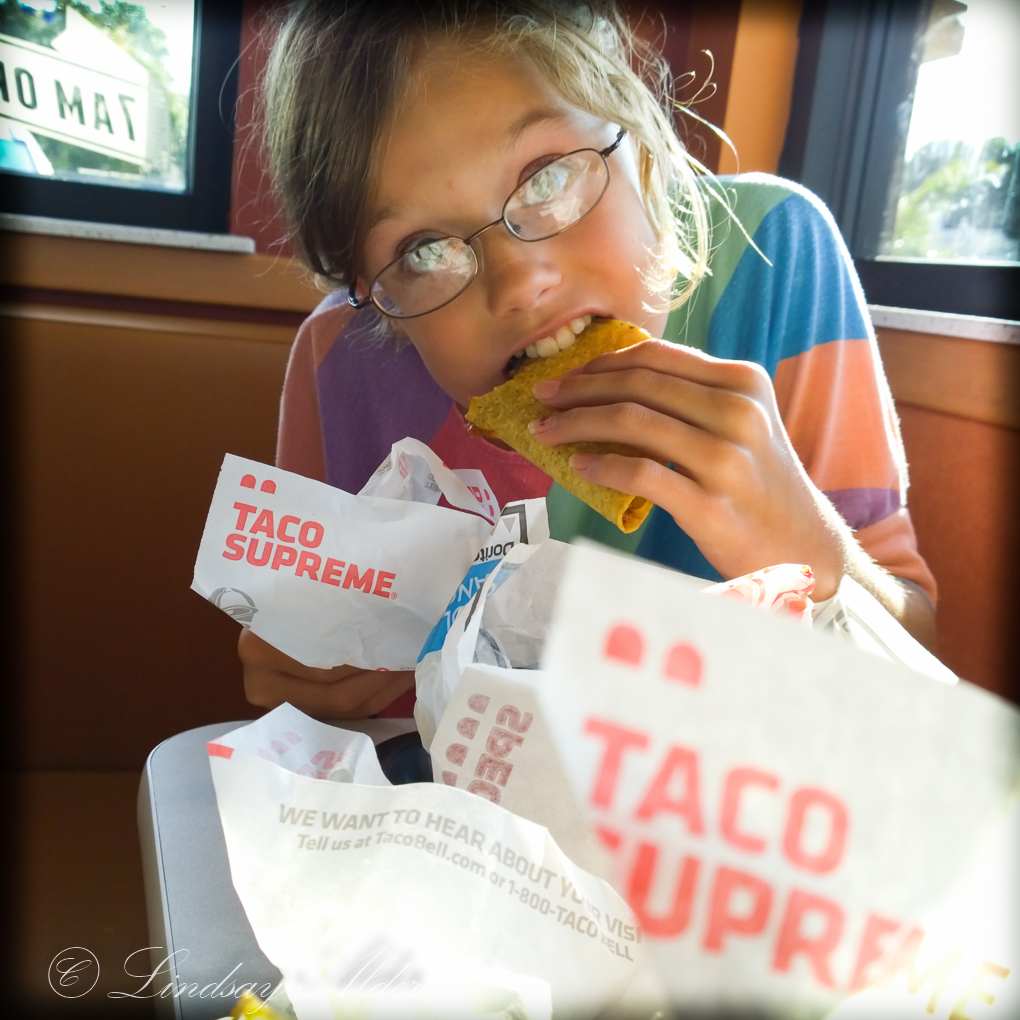 Sixth taco.  Sixth.  After a whole lunchbox full of snacks.  Must be all the calories she's burning.  From sitting.

3 - When Carson puts his mind to it, he can make a mean rubber band chain. 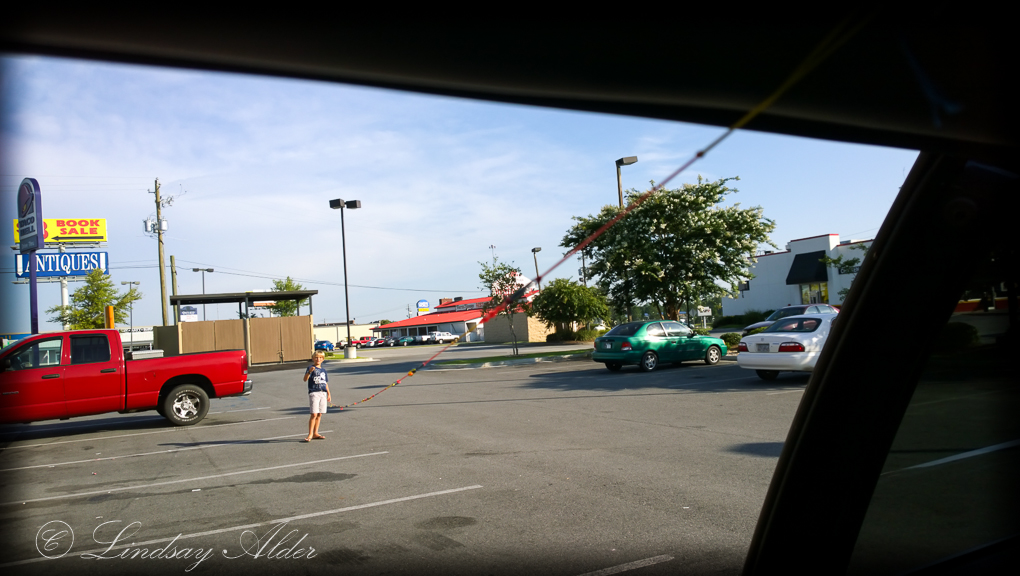 But he cannot check both ways for cars.  Ever.  Sending him out into the parking lot to extend his chain was a little bit of a risk.

4 - TK doesn't let being strapped into his carseat stop his groove. 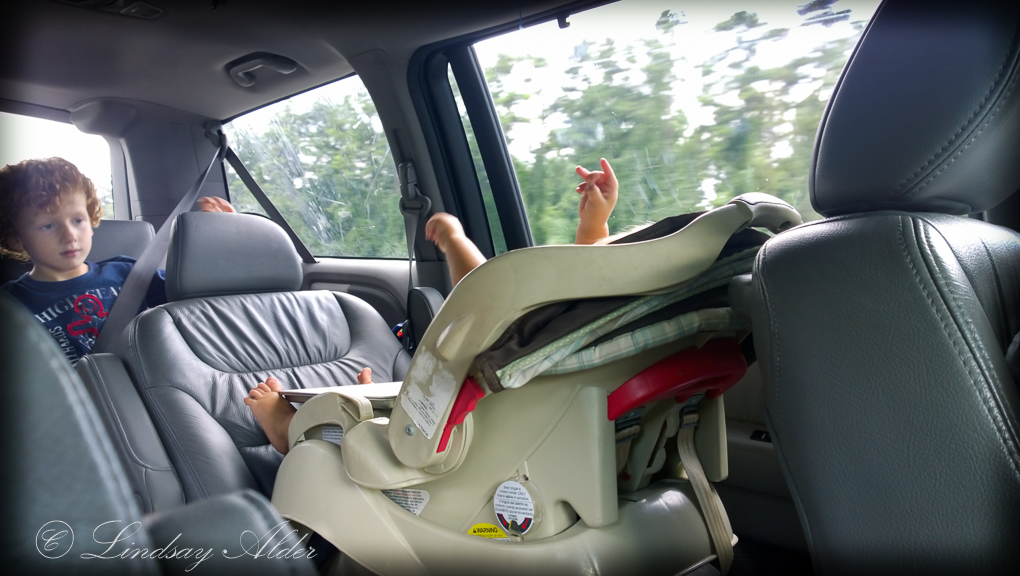 These are dance hands and feet, in case you were wondering.  Whenever we turned the music up, he would bop along happily.

5 - Never expect TK to sleep in a pack-n-play if he can see his Daddy. 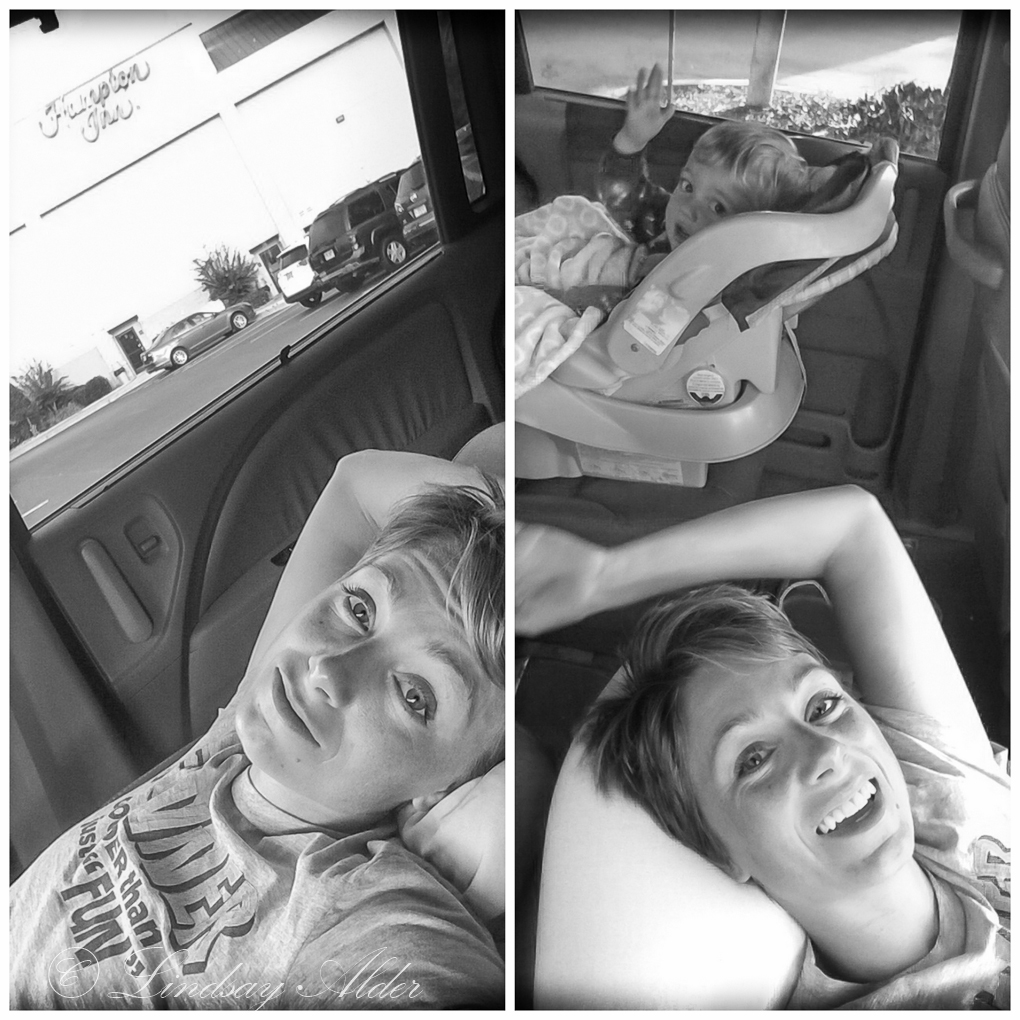 In fact, it's probably best to just not even hope that he will.  Because he probably will just scream and yell "DA-DA" over and over and over until you finally give up and take him to the car at four in the morning.  Thankfully Valdosta, GA is a beautiful place to drive around at that early hour.  And also, thankfully, I felt relatively safe sleeping in my car once the little munchkin fell asleep.  It was a rather... restless night.  At least he's cute.

6 - Apparently, it was a popular time for the temples to be closed 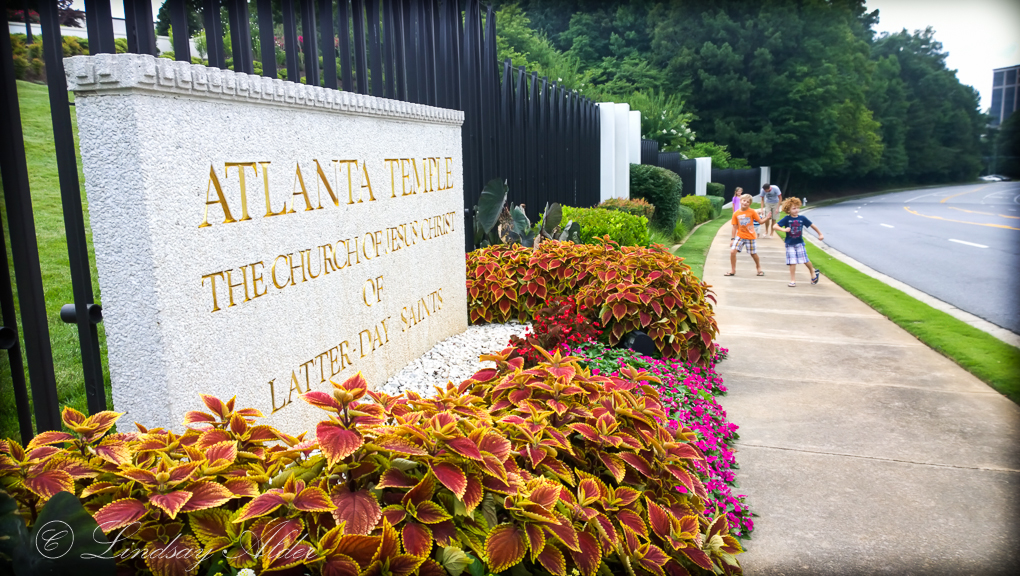 Because the same thing happened in Atlanta.  The kids didn't mind too much, though.  They were just happy to get out and stretch their legs.  In fact, who are we kidding?  They would have been happy in a muddy field.  (Well, that just sounds awful on a road trip)

7 - Fun cousins are even more fun when you grow up to be adults. 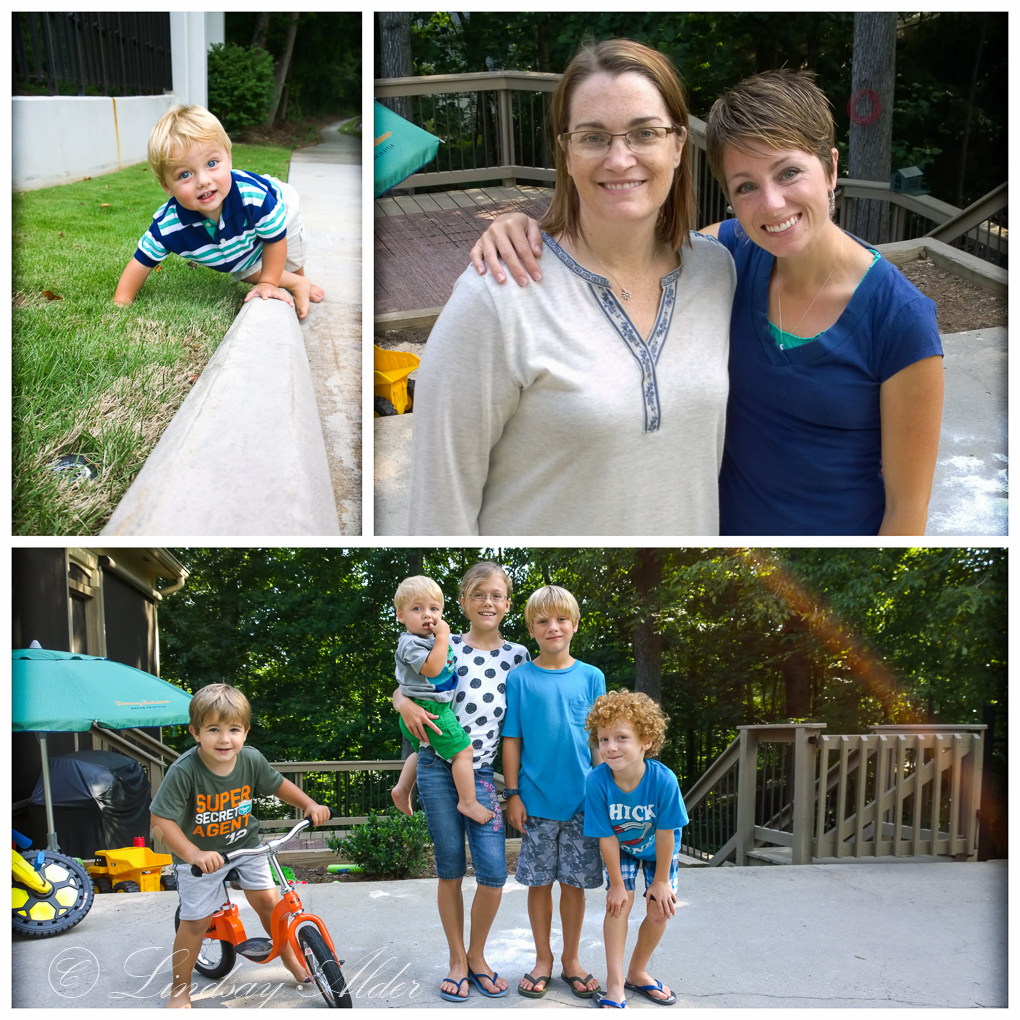 Gunda was always a favorite cousin as I was growing up.  But at 10 years older than me, she always felt a bit more like a babysitter than a friend.  Now, adulthood has stripped away that filter, and it was so fun to stay in her house for a night, chat about our grandmother (and our great-grandmother whom she remembers but was gone by the time I came around) and get to know her family. 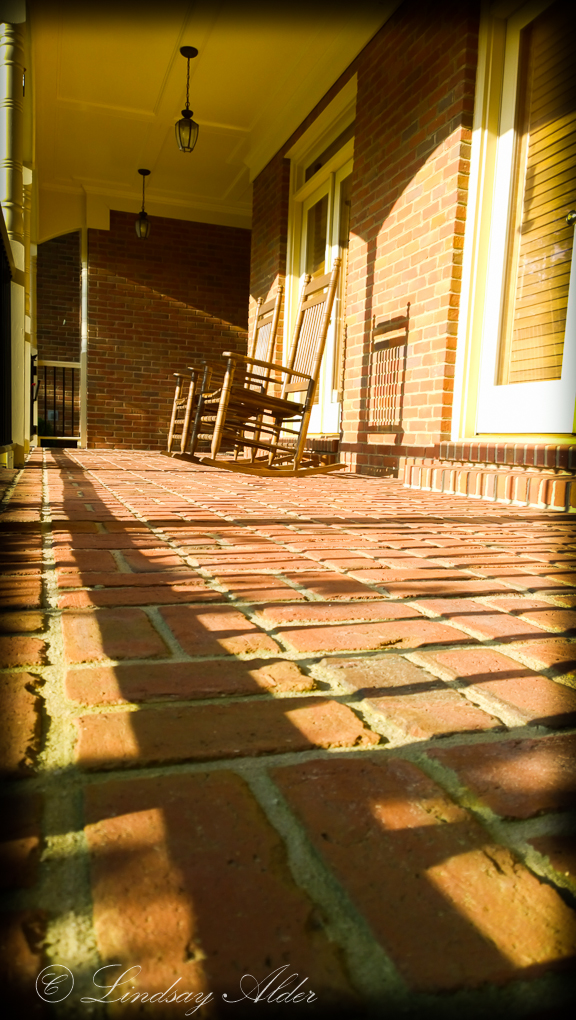 Also, she has a southern porch. And giant trees. And lightning bugs.