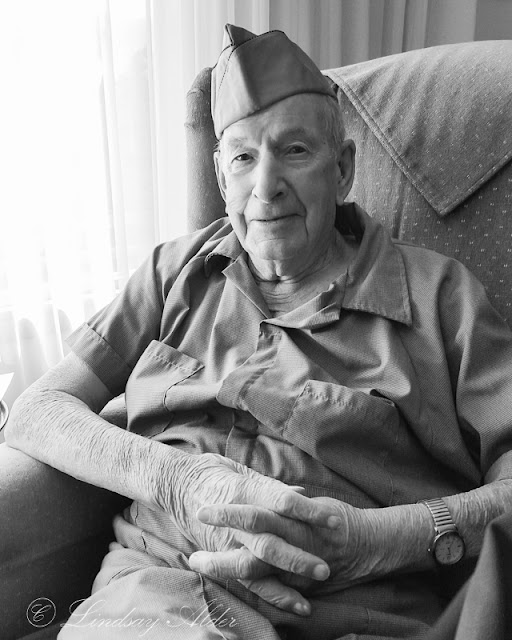 I-15 stretched before us for miles and miles and the children were quiet in the backseats.  Through the radio the sounds of Christian lyrics and gentle harmonies helped bring about the stillness and reverence that I love and anticipate come each Sabbath.  Our wheels were rolling south, away from the small farm-town of Malad, Idaho where, tucked away in the sleepy streets, we had found the old home of Great Grandpa Alder and had taken our children in to listen to his stories. 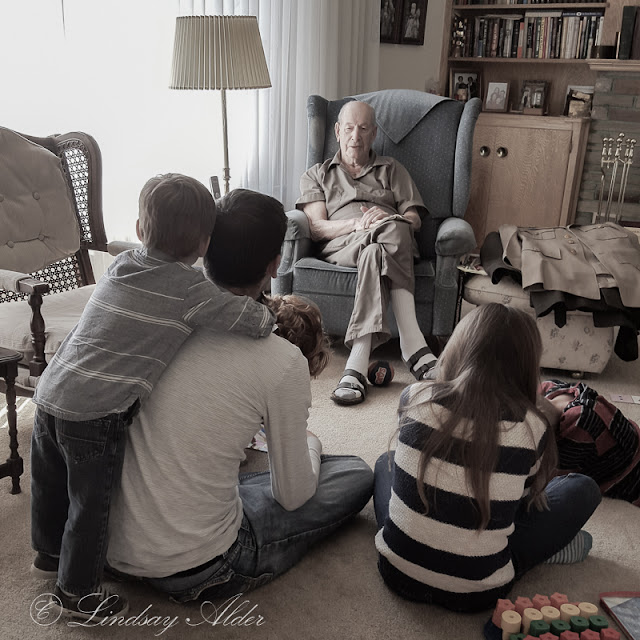 Ninety-four years of experience and wisdom hide in this kind, humble man. An air force pilot who flew in World War II, we asked him to tell us some war stories but, smiling at the invisible memories, he flicked his wrist dismissively and said, "Oh... well... that was a long time ago."  We pressed and out came a most humble retelling of a beautifully heroic story in our own family history.

It was a story that took place in a B-24 bomber, in the air, over Nazi Germany.  It was his B-24 bomber, of course, and he, dressed in uniform and sitting in the pilot seat, was working to fulfill the mission he had been sent there to complete.  But they "hit some flak" as he said (which I had to ask about in order to learn that that means 'shot from the ground by Germans with anti-aircraft guns'), and it did enough damage that they found themselves spiraling out of control towards the hard, enemy land.

His co-pilot panicked as they dropped 2,000, 5,000, 10,000 ft. from the sky, "and I had to... to reach over," he demonstrated by reaching his arm out to his side, "and hit him just as hard as I could.  Just... just like this," he slammed his fist into his own chest and relaxed back into his living room chair with an amused laugh. "It worked," he shrugged.  They regained control of the aircraft and hobbled the damaged plane over the Alps to the safety of Switzerland where he spent the last 6 weeks of the war as a POW.

I thought about this story as the mini-van carried us further from the inviting warmth of his living room, and it became more and more real as the miles between us increased.  How remarkable, I thought, that he was able to keep his head clear through that whole thing and save the lives of all the men in his plane...  As the facts replayed in my mind, I saw true heroics in it all.

But his voice had been so quiet as he told the story, and his tone so humble it made me feel as if he might have been recounting what he had eaten for lunch that very afternoon.  No fancy phrasing, no heroic words, just simple facts from a humble heart.  Simple facts that, when strung together and played with a measure of feeling, leave me rather breathless at the suspense and true fear he must have faced in those moments - and so many others - in the war.

There must be millions of stories like this from World War II alone. Beautiful, terrible, hard stories that add depth and meaning to families. Stories told in English, and in German, and Japanese...

Thankfully Great Grandpa Alder's story ended well.  He returned home to his wife and they built a beautiful family in which I am lucky to take part. 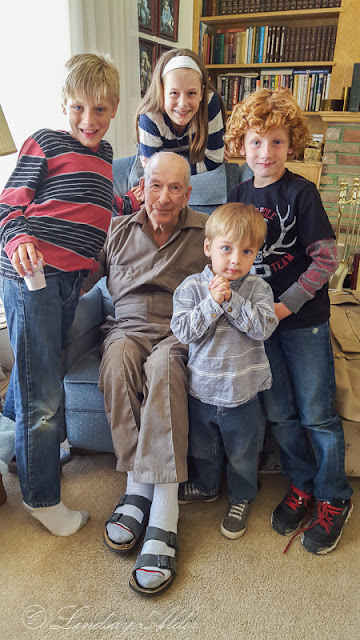 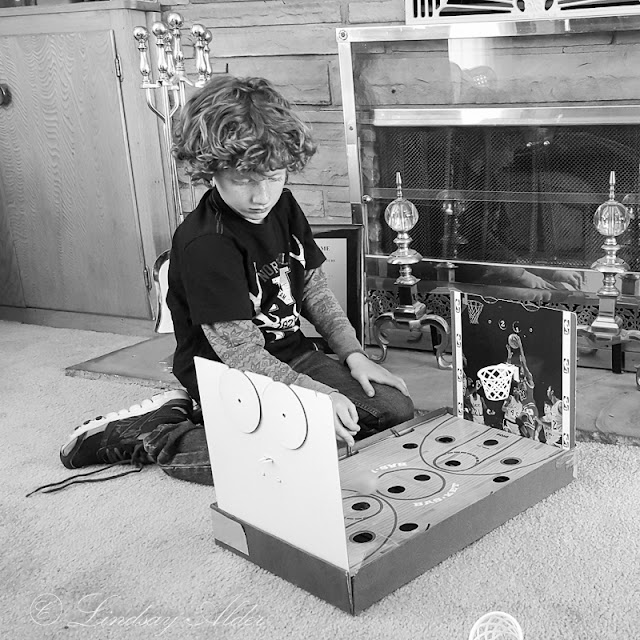 As I watched Miles play this paper and cardboard basketball game, the same one that Brian played with as a child that has somehow, miraculously, survived the years, I wished that he could just stay there and soak up as much wisdom as he could from the old man sitting only five feet away.

But the time for goodbyes came, and Great Grandpa Alder wrapped each of us up in a hug, squeezed the children tight and said his traditional, "Ohhhhhhh, baby!" in their ears.  We waved as we stepped out on the porch with promises to visit the next time we were in the area.

"Well, don't wait too long!" he called with wink and a smile, 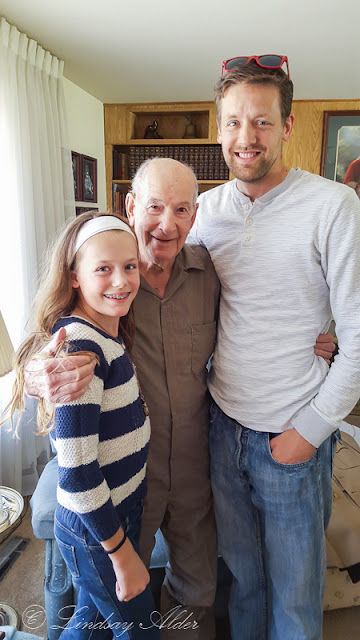 He said the same thing to us the last time we saw him, I remembered, the side of my head resting against the glass of the passenger side window, just a few months ago.  The trees outside moved so quickly across my view, each individual tree blurring so completely with the next, that my eyes didn't even try bringing them into focus.  Instead, they rested in the blur while my mind analyzed how wonderful it would be if we all could live in a large family community - great grandparents and great grandchildren, parents and grandparents, children and grandchildren, all mixing together and sharing, as only families can, the walks of their daily grind. The young sharing energy.  The old sharing life.