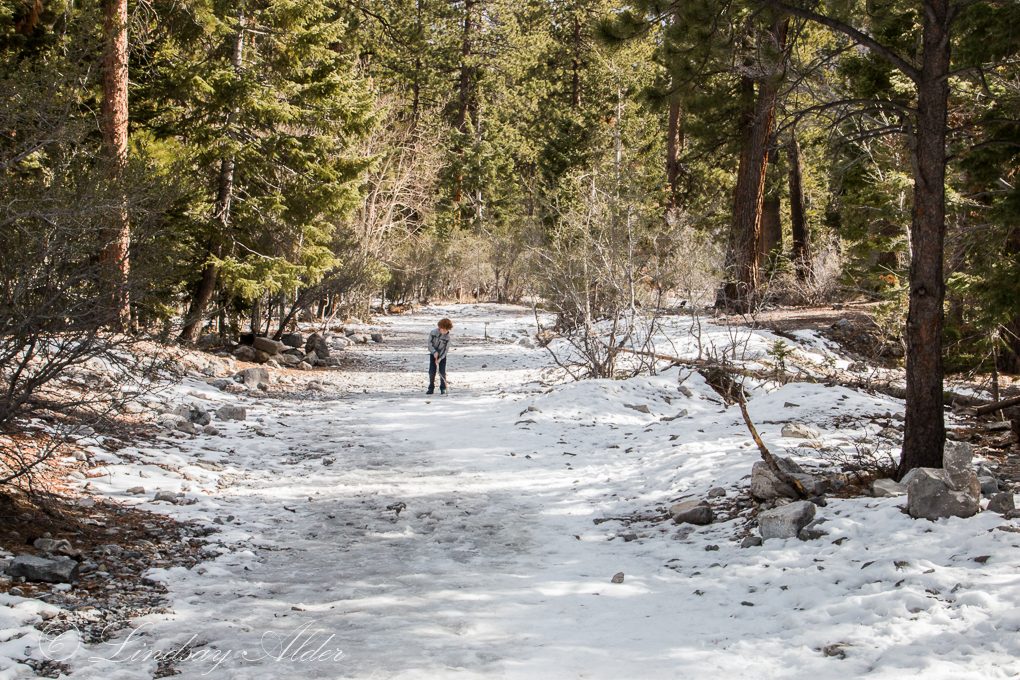 Green!  Green!  Doyouseethegreen?!?!  And, guess what?  It's a.l.i.v.e.  Truly. And no one is paying anything to water it.  This is called nature, folks, and it only lives an hour away from us.  The first thing I noticed as we drove into the mountains was the fresh smell of life.  I didn't even realize I'd missed it until it started circling through the car, reminding me of itself. 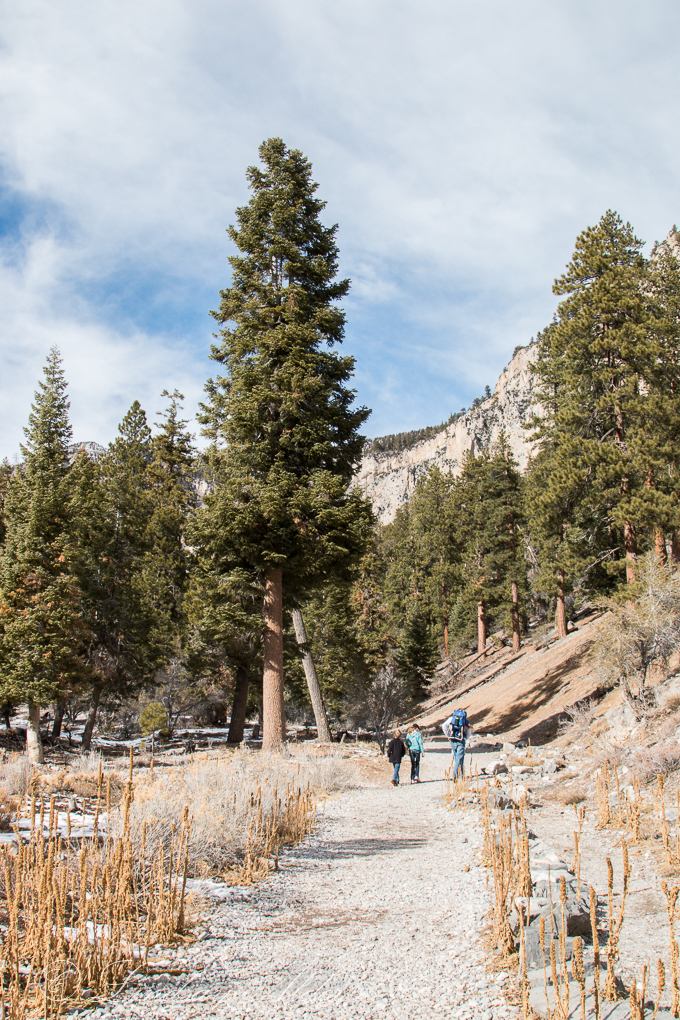 This isn't even what I would consider the most beautiful type of green... but it is such an improvement from my new day-to-day life of red dirt that it was incredibly beautiful to me.  I may have shed a tear or two. 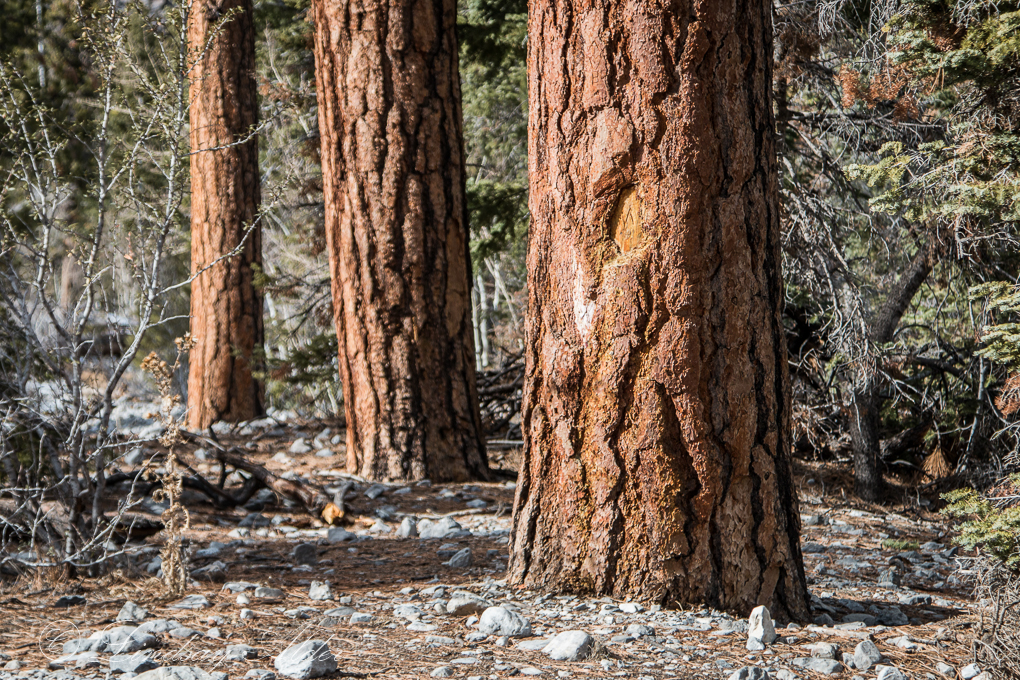 We were in Mt. Charleston, on our way to see a waterfall.  The Mary Jane Falls, to be specific. But we kept getting sidetracked along the way. Children, remember branches.  Please do not forget, moving forward in the desert life your father and I have chosen for you, that they have been a giant part of your young childhood. 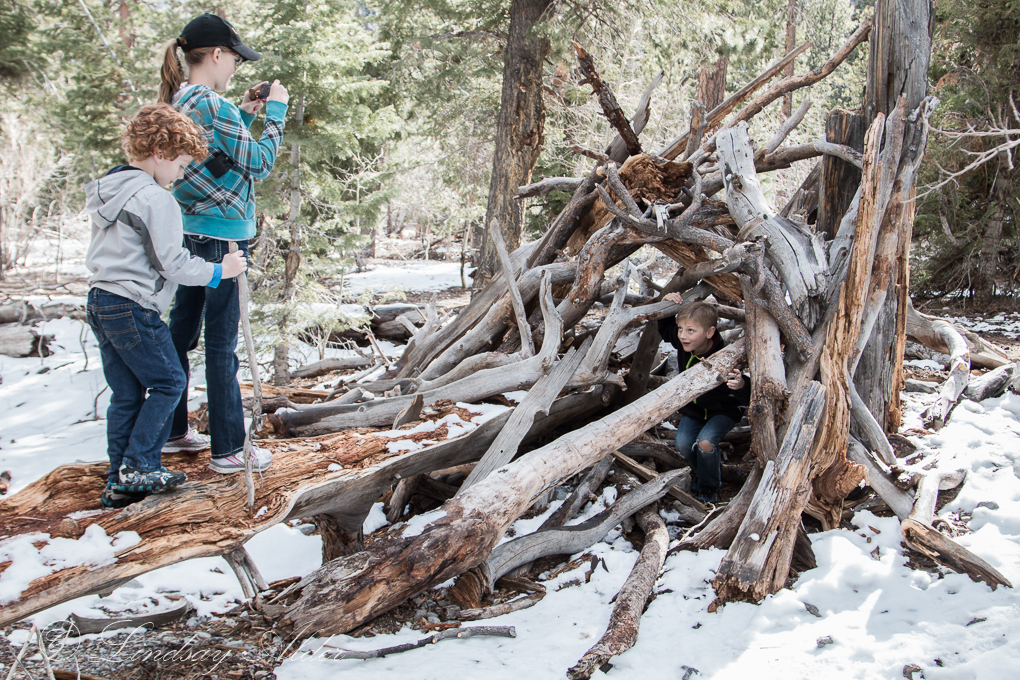 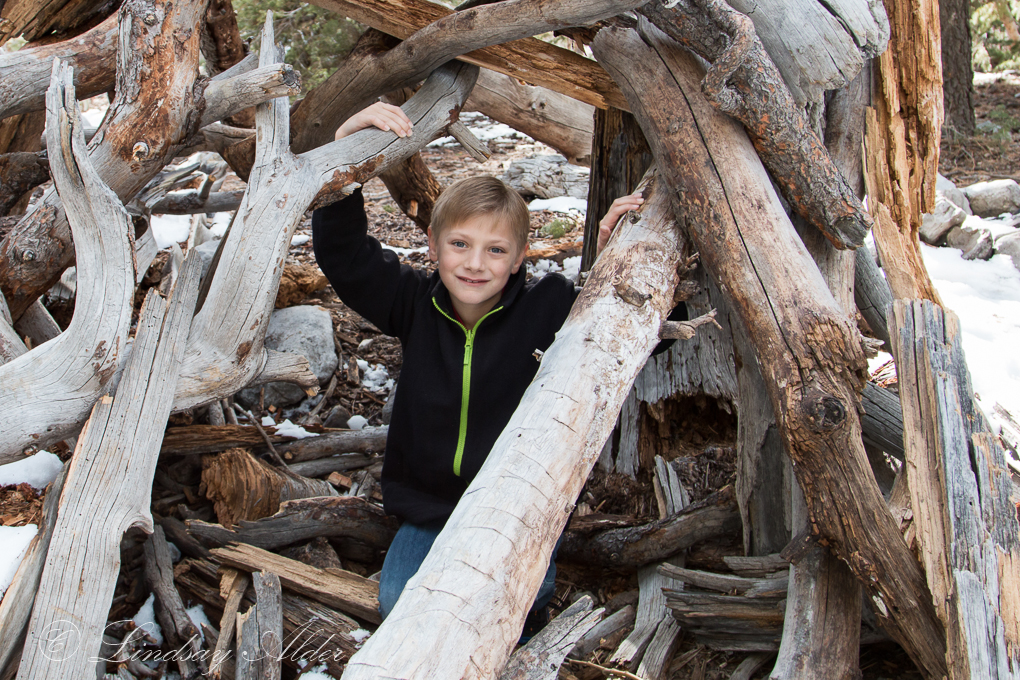 Except for you, Teek.  Sorry.  But you'll get to have amazing winters where you can play outside all day every day if you'd like. So, there's that. 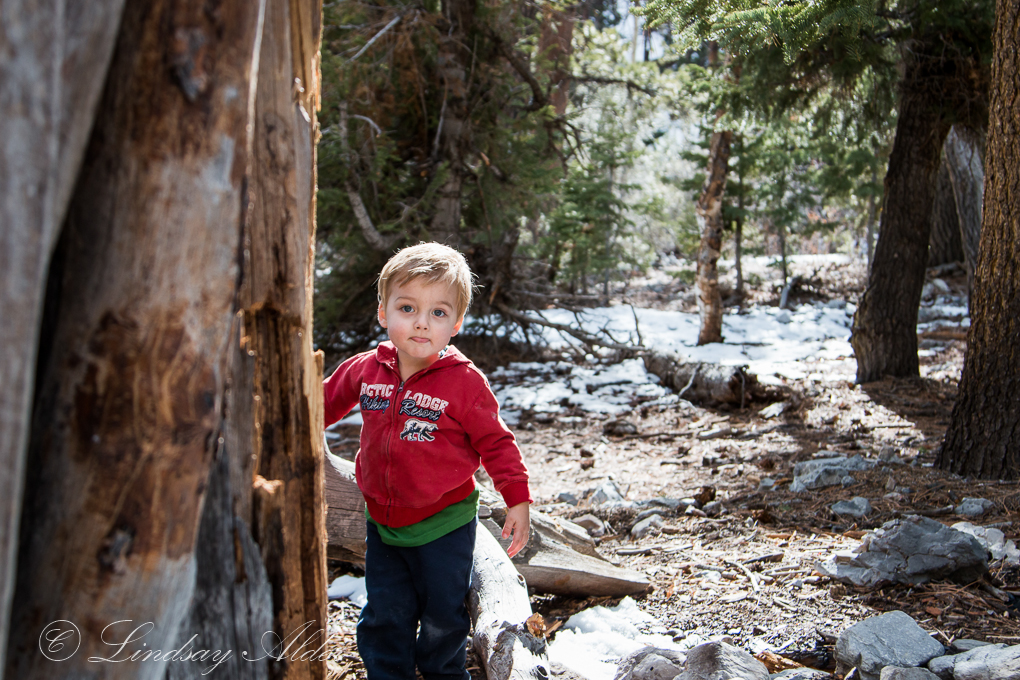 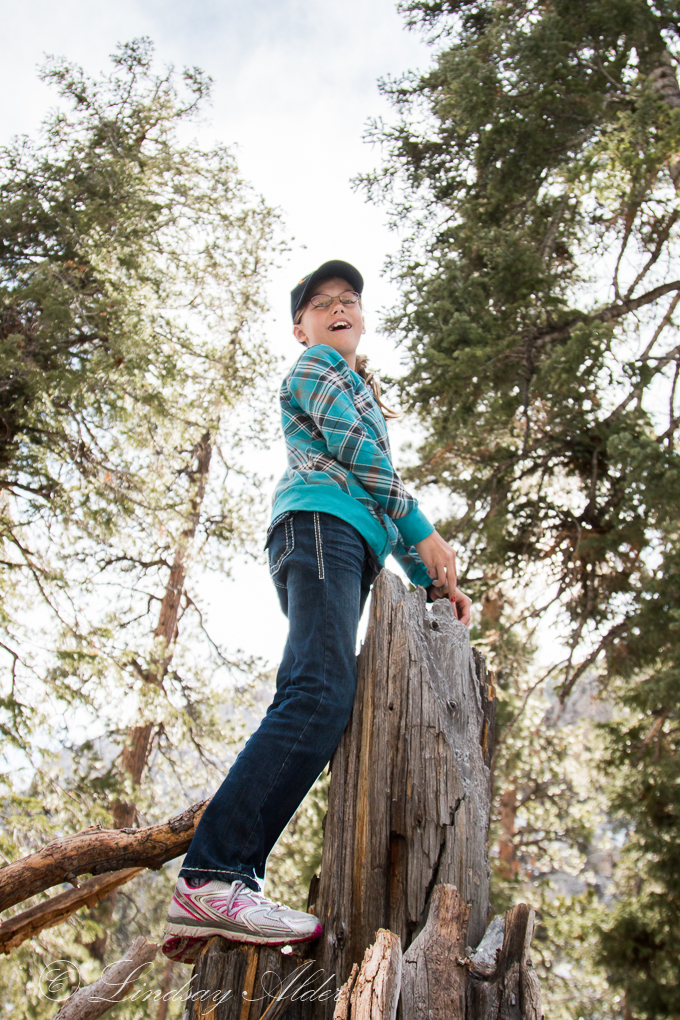 The hike up to the falls was rather strenuous for the little legs... but they didn't complain once because it was an unpaved trail that kept them climbing and jumping and sliding the whole way.  Even Teek wanted to climb by himself (though he needed a little encouragement to please. keep. walking. and ignore the millions of tiny treasure rocks you are finding.  McKenzie was the best at giving that encouragement). 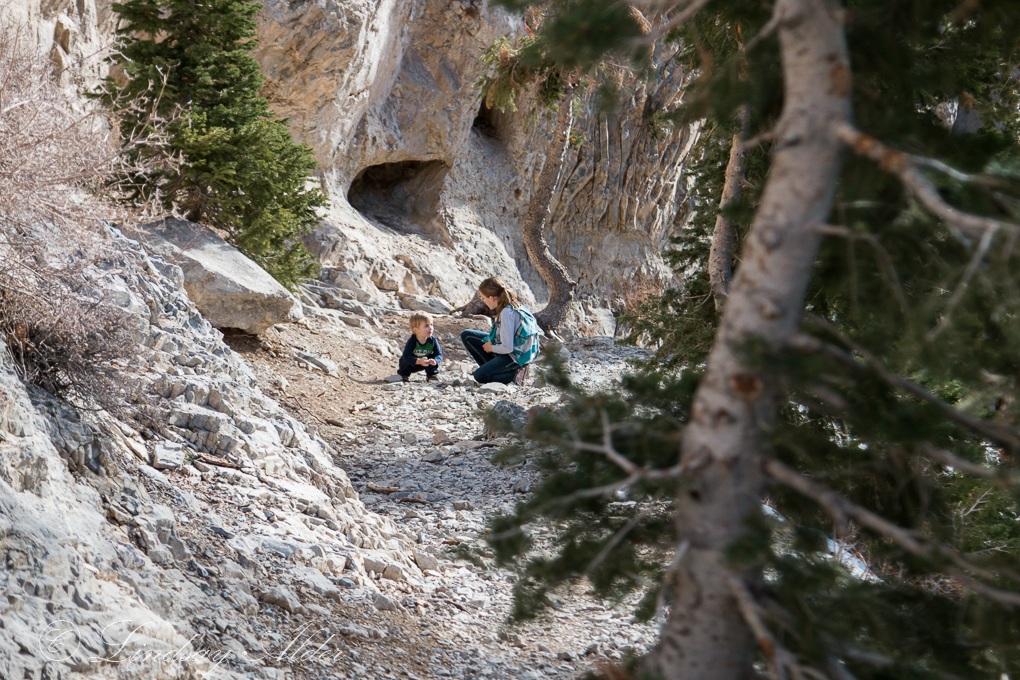 Along the way we saw a cave in the side of a cliff that I knew would elate the kids.  "McKenzie!" I said with my arm extended towards the cave.  "Look!"  I watched her gaze follow my arm until it rested on the dark hole in the mountain before us.
"WHAT?! Ohmygosh! A CAVE!" She bounced up and down and Brian ran off ahead to catch the boys to show them. 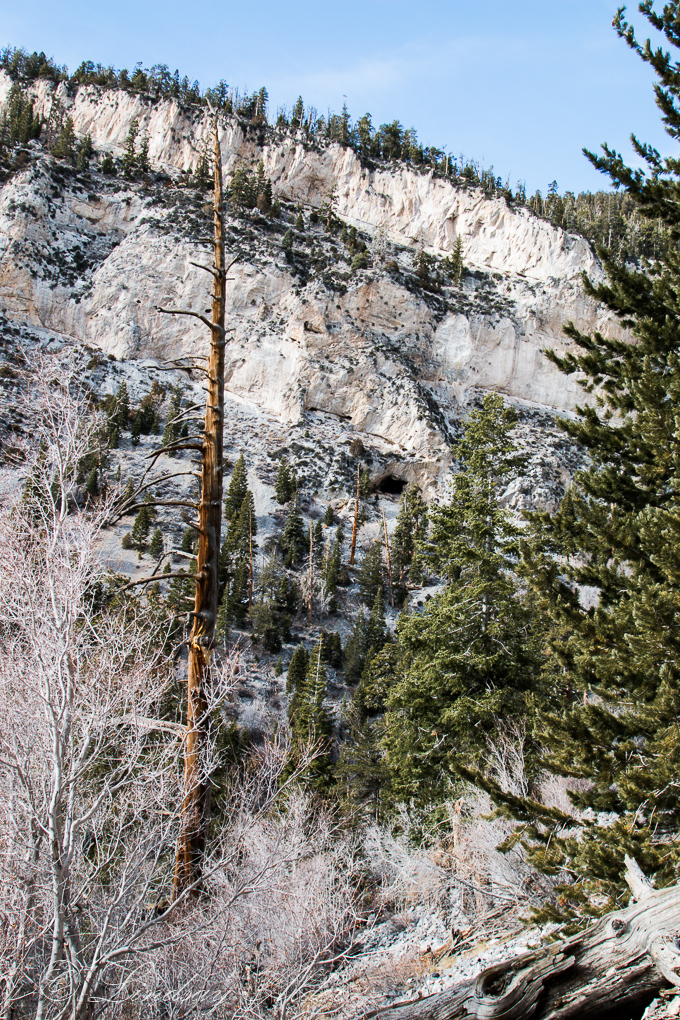 Minutes later, he came back and shrugged his shoulders.  "They didn't actually care."
"What?!" I asked, surprised.  "Did you show it to them?  Like, did you point it out and make sure that they saw what you were talking about?" My kids love caves and hideouts and all things mysterious, so it seemed completely uncharacteristic for them not to fall all over themselves about a real, true cave.  But,
"Yeah - they saw it.  Carson just said, 'meh'."
"I don't even know what to say..."
I thought it was cool anyway.

When we finally arrived at the falls, I immediately realized that I should have done a quick Google search before our hike so that I could have prepared myself.  McKenzie knew what I felt.
"Uh, mom?  This isn't a waterfall... it's more like a watertrickle." 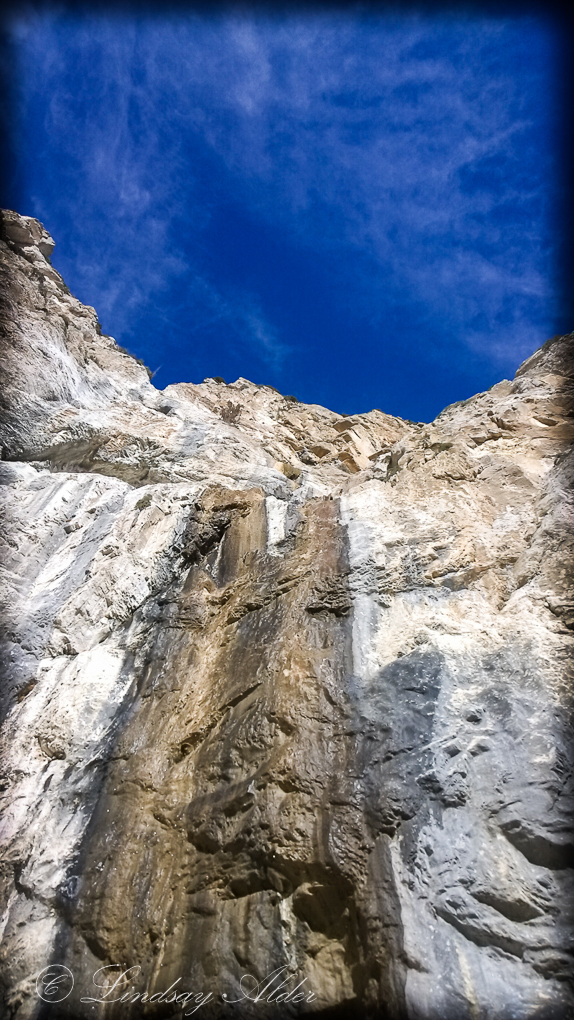 Indeed.  It was a wet smear across a dry mountain is what it was.
"Well, dear," I said as I put my arm around her shoulder.  "I guess that's how the desert does these things."
Thankfully, the disappointment of the waterfall itself did not detract from the beauty of the hike we had just been through.  I wished for a wide-angle lens... and even then I'm not sure it could have been fully captured. 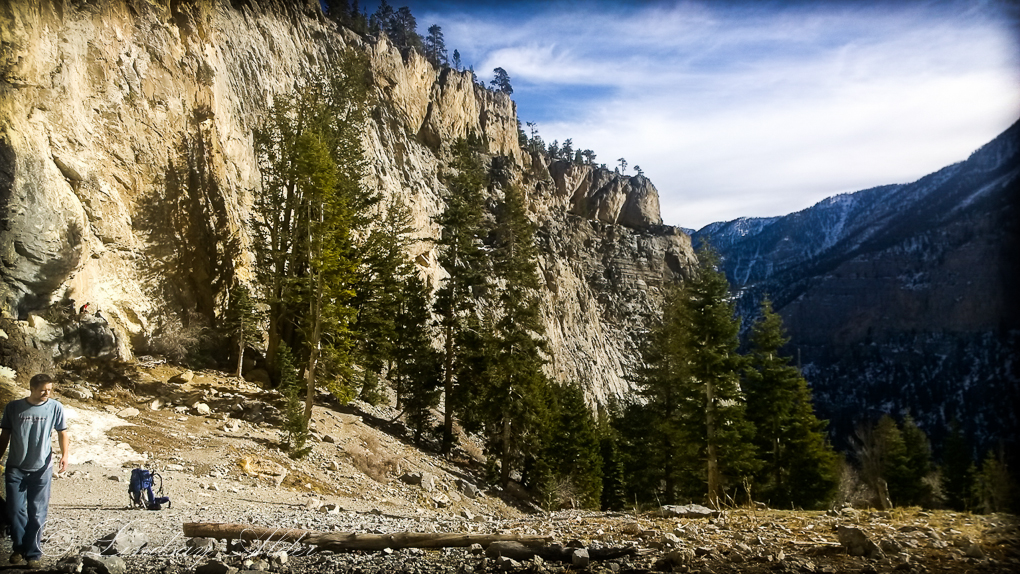 Crunching it all into one panoramic photograph makes it seem small and slanty... but it gives you an idea.

Anyway... it was beautiful and peaceful up there on top of that mountain, so Brian and I let the children play unsupervised on the rock faces and stretched out in the sunshine. 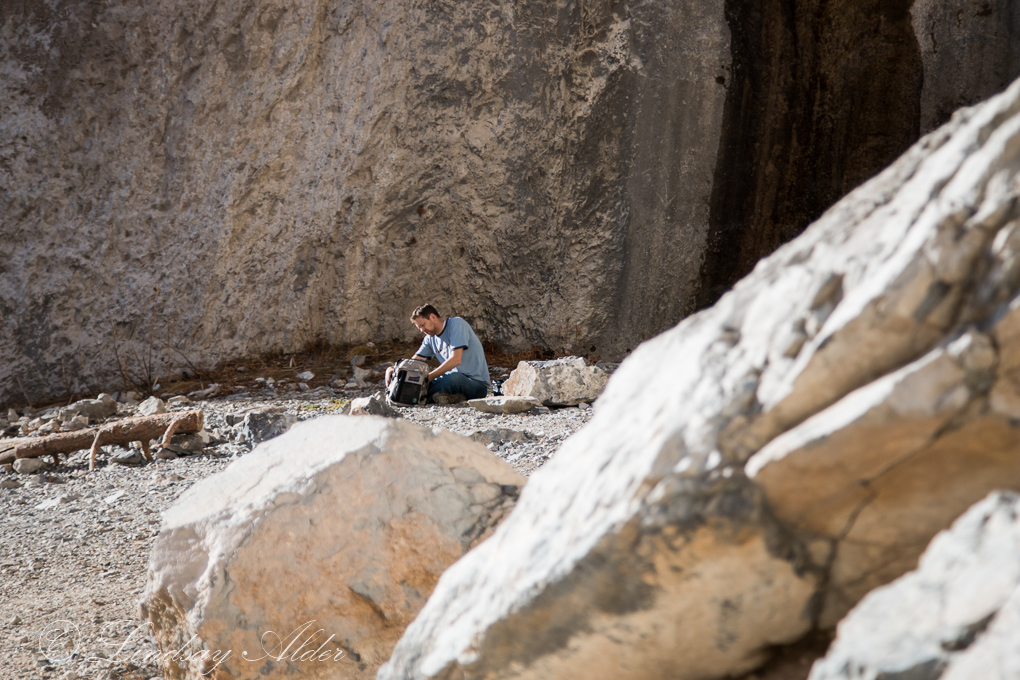 But finally it was time to pack it up since the sun was refusing to slow it's path and we were concerned about the temperature fall when the sun was no longer warming our skin.  The way back down was just as fun... even more fun in some ways since the older kids ran off ahead and Teek slept in Brian's arms, leaving Brian and me to chat away at whatever we fancied.

Now I have a place to go whenever I need a little bit of life infusion.  We'll be back Mary Jane Falls... we'll catch you when you're actually falling one of these days... 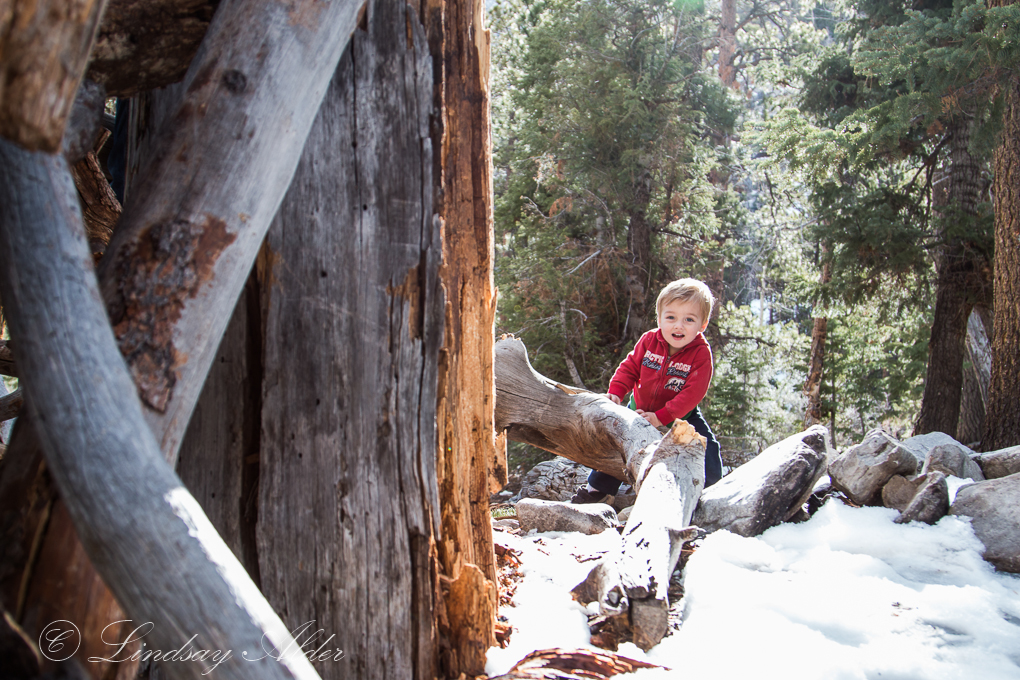