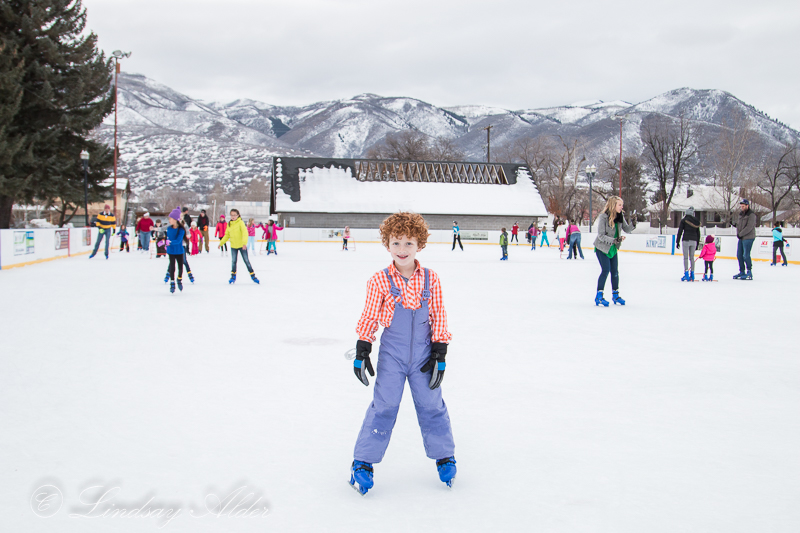 "Mom, do you think that people will make fun of me because these snowpants are purple?" Miles was standing in the middle of the room looking down at the snowpants he'd spent the last five minutes wrestling his body into, and realizing, for the first time, that they were severely lacking in the manly department.
"Maybe," I said with a shrug.  "But they'll keep you warm and dry."
A tough predicament.  But it only took him a couple of seconds to shrug his own shoulders and decide that he'd rather be Feeling Comfortable than Fitting In.  Yay Miles! my mama heart cried. I wanted to shout out the lessons: Stay away from comparisons! Always make decisions based on what feels right to you! Never worry about what other people think of you!   but I was worried about what he would think of me, so I didn't. 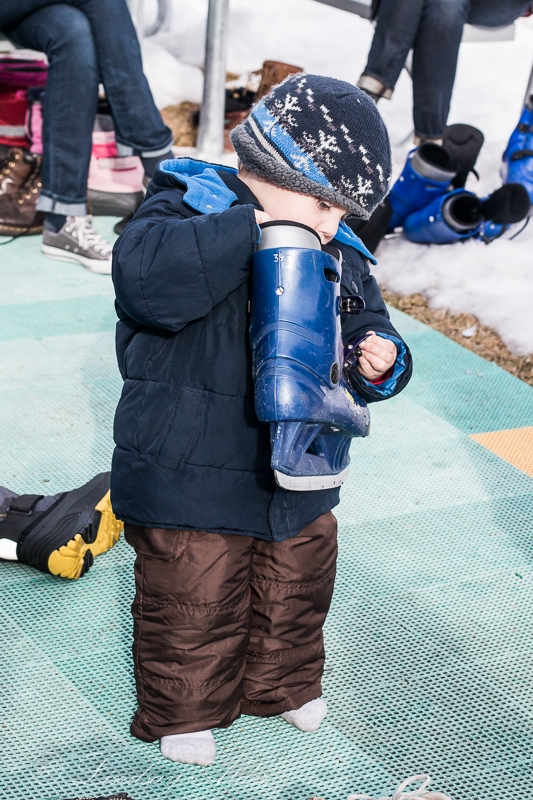 When we arrived at the Midway ice skating rink and began switching our shoes for skates, TK caught on fast to the idea of 'ssoo ah?' and promptly took his shoes off.  He was dismayed to find that he would need to be keeping his 'ssoos' on, but when we shoved an ice trainer in his face and told him to go play on the ice, he forgave us. 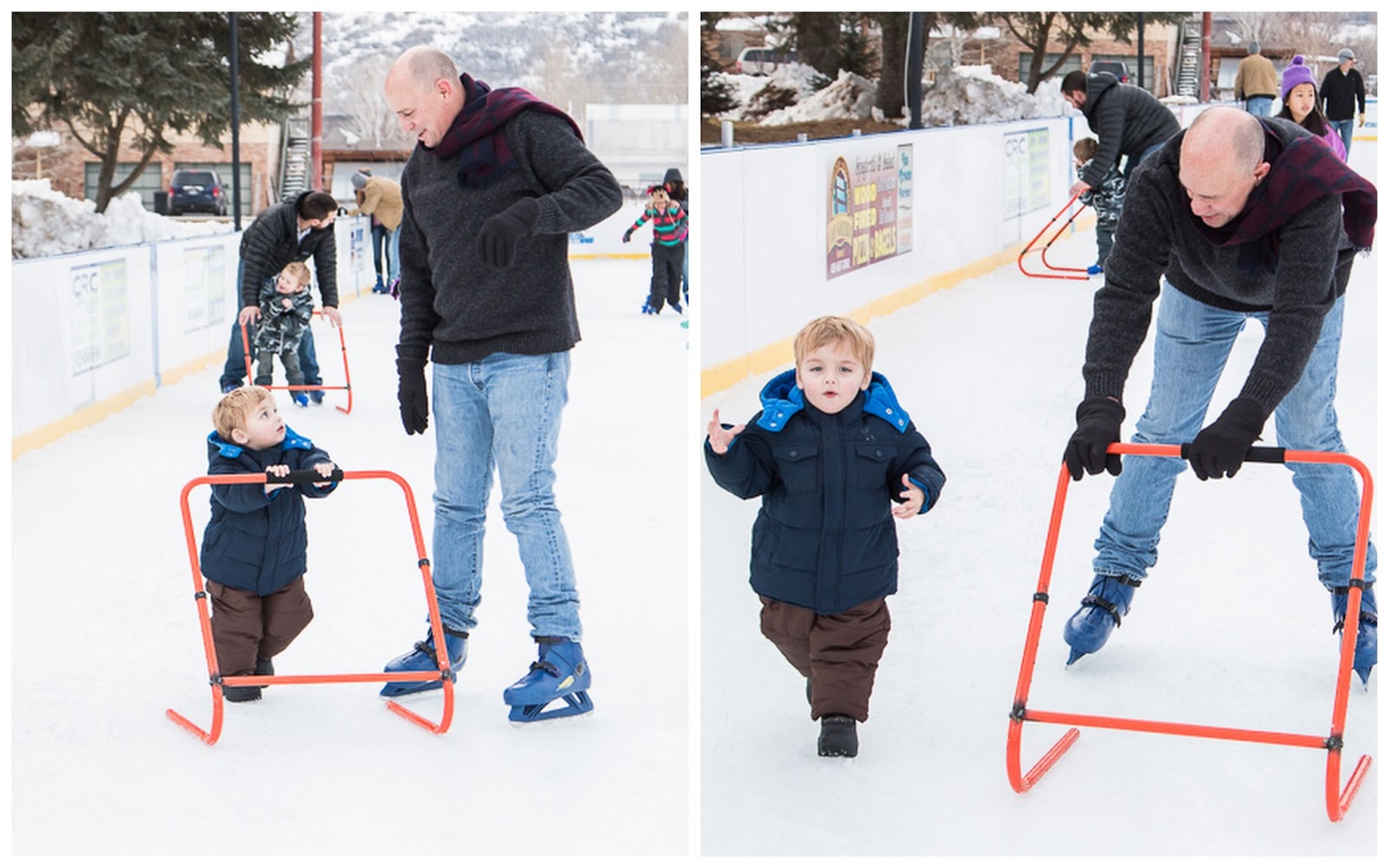 Remember how Michelle and Jake are newlyweds?  So stinkin' cute.  And weird.  Jake is weird.  Miles, be weird like Jake.  I think he would totally feel comfortable in purple snowpants, too. 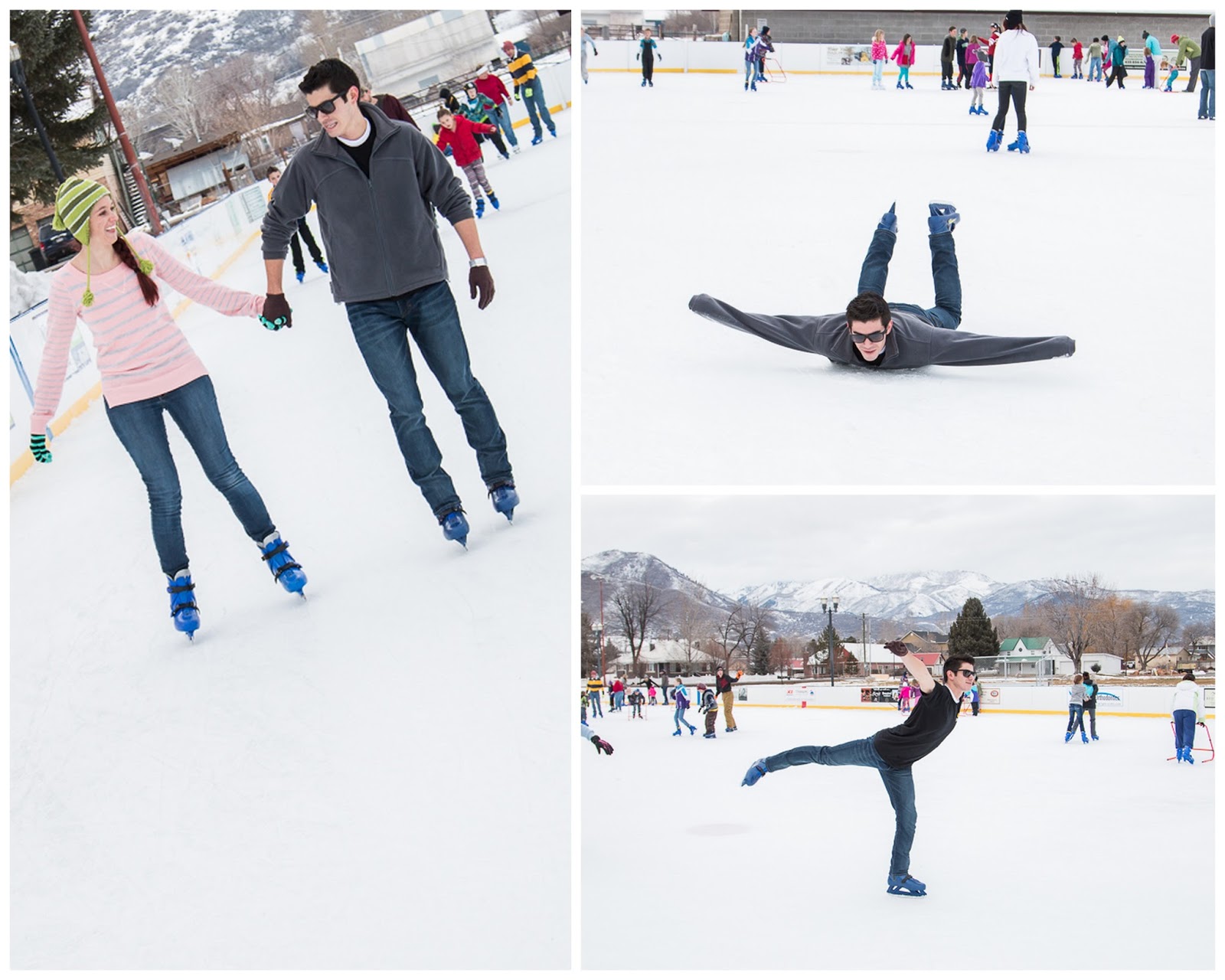 I watched from the sidelines this time because of a cute little condition called Sacroiliitis that has decided to plague me... but it's amazing how much more you see when you're slightly removed from the action. I stood by my mom and watched my family skate around the rink; my dad, my sister, Jake, Brian, and my kids fluidly moving, around and through and in and out, independent from each other. Oftentimes they were scattered all across the rink - but it was beautiful and symbolic to me when the scattered fragments gravitated towards each other again and again and again.  I love being part of a family.

And I also love this next photo.  Mostly because of what is happening to Carson in the background. 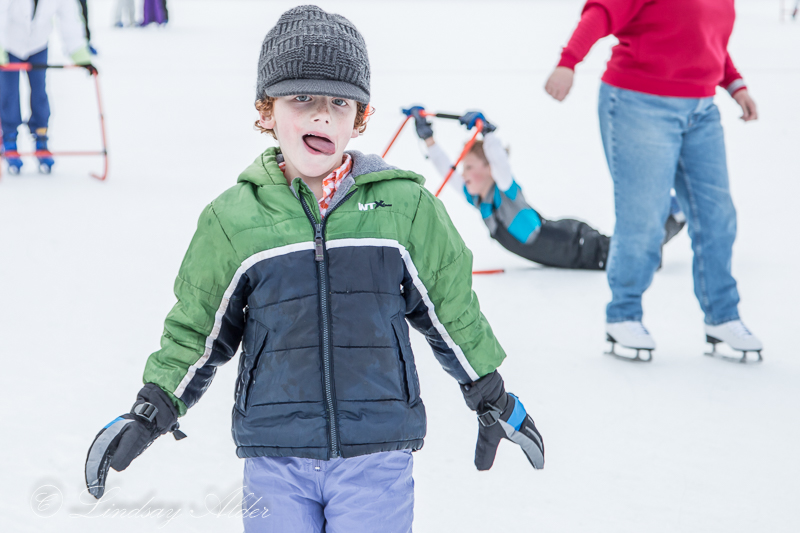 It made me happy to be standing next to my mom, chatting about life and laughing at the skaters when they fell (I know... but I couldn't help myself. Is there anything funnier than people falling?). 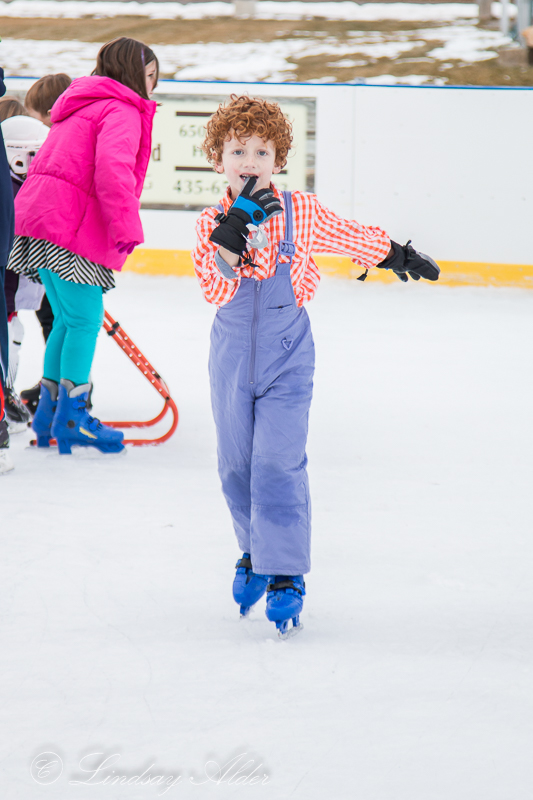 Teek flew around the rink a couple of times in the arms of that handsome man.  So that made him happy. 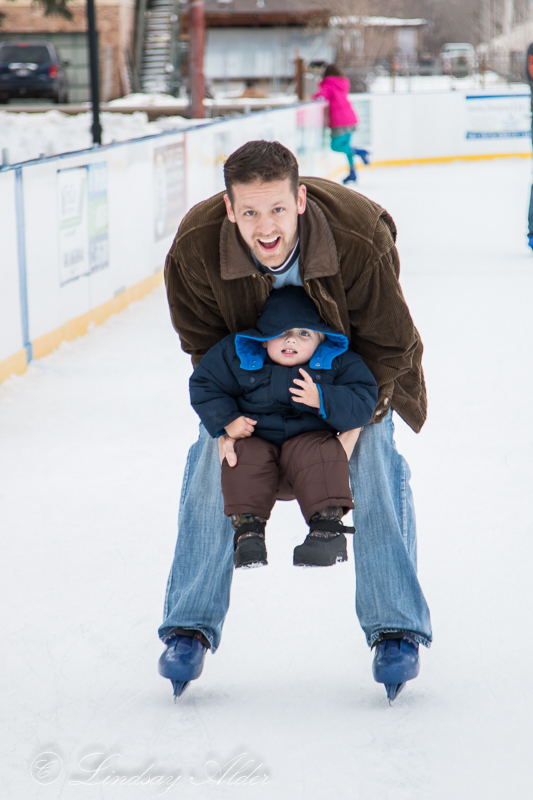 And my winter princess... I just love this girl.  She is turning into such a great mini-adult.  She looked beautiful on the ice and took such happiness in helping her littlest brother around. 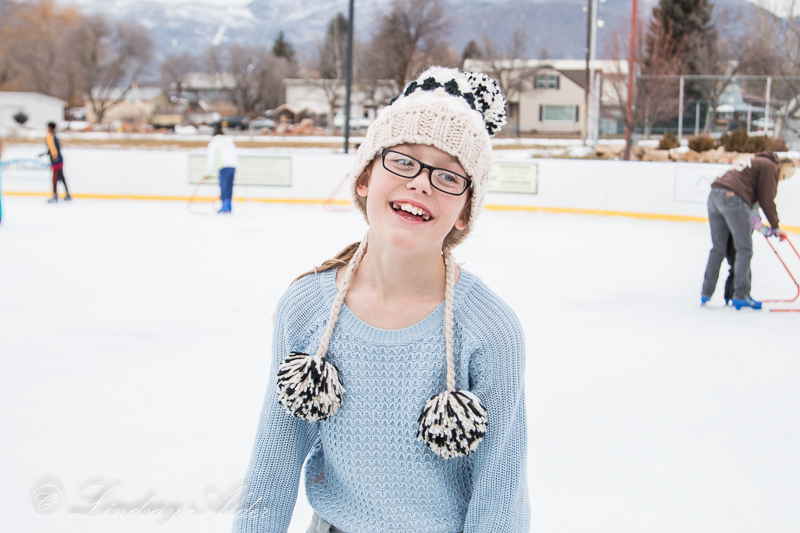 Carson won the Most Improved Trophy.  He went from spending most of his time on the ground to looking pretty sharp skating all on his own around and around and around.  It was interesting to watch the path of his determination.  At first it was fun determination... he was laughing at himself and having a great time - and then by the end, when he'd started improving in leaps and bounds, his determination turned into rock.  The fun had been seeped out of it and he just hit it again and again and again.  It was completely foreign to me - - - if ever I do something optional that starts to lose it's fun, I just stop.  I love that he has that drive in him. 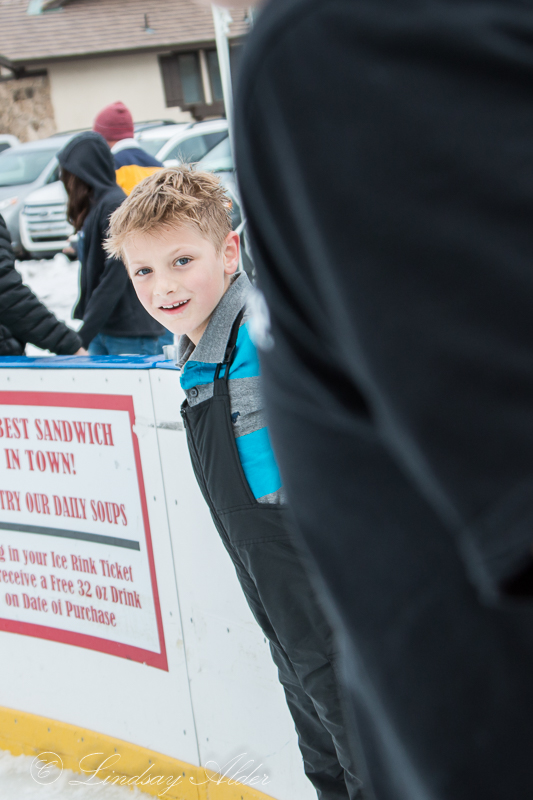 In the end, the purple snowpants kept Miles warm, and the fatigue helped us all sleep well that night. 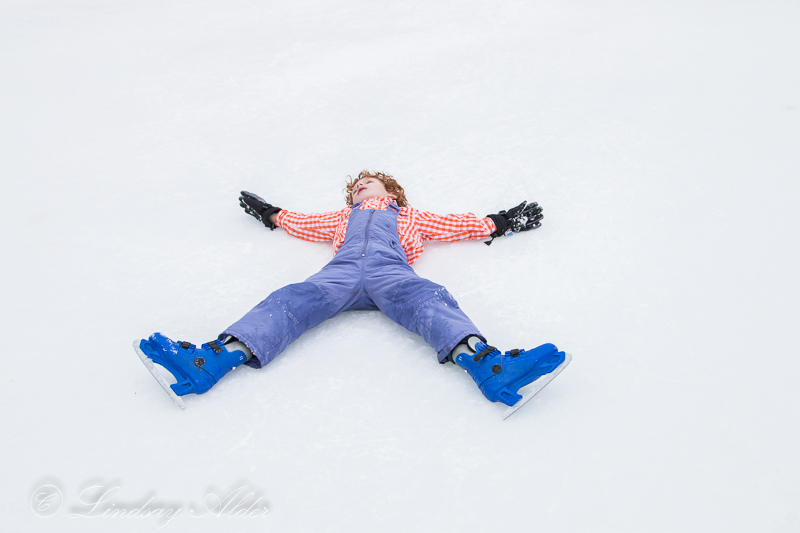