Weddings are fun. Weddings in Hawaii are more fun. Part 3 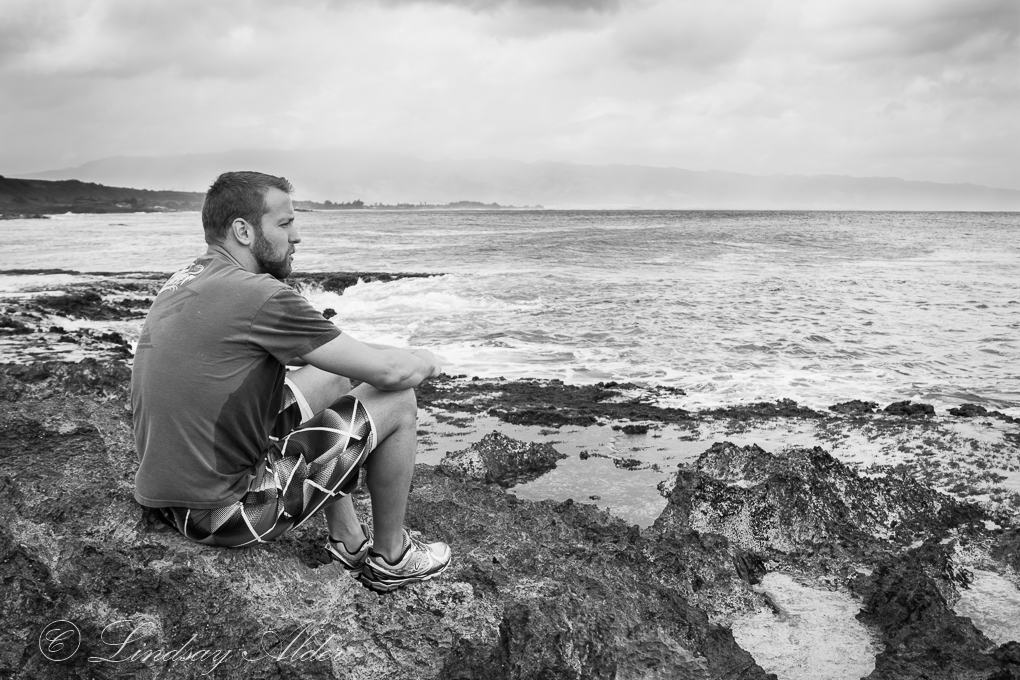 There have only been a handful of times in my life where I feel small and helpless against the power of nature.  I'm sure if I were a tornado chaser, or a deep sea fisherman I'd have those sorts of feelings all the time.  But I'm not, and as such, I'm not quite used to the feeling.  The final full day we had in Hawaii was a Sunday, and after hitting a morning church (where they actually had the congregation sing Aloha 'Oe [Farewell to Thee] to a family who was moving - it was incredibly touching and left me in tears because it was different and I've come to love different over the past years - but that's another blog post), we spent the rest of the morning awed by the power of the waves on the far side of Shark's Cove.

Shark's Cove is a beautiful place... a cove surrounded on all sides by jagged rocks and filled with crystal clear water.  We actually went back at sunset on this particular Sunday because I anticipated that the sunset over the cove would be breathtaking.  The clouds were a little too thick for what I was really hoping for, and my lens wasn't wide enough to catch the whole thing, but I'll share a picture from that hour anyway just so you can see what the cove actually looks like. 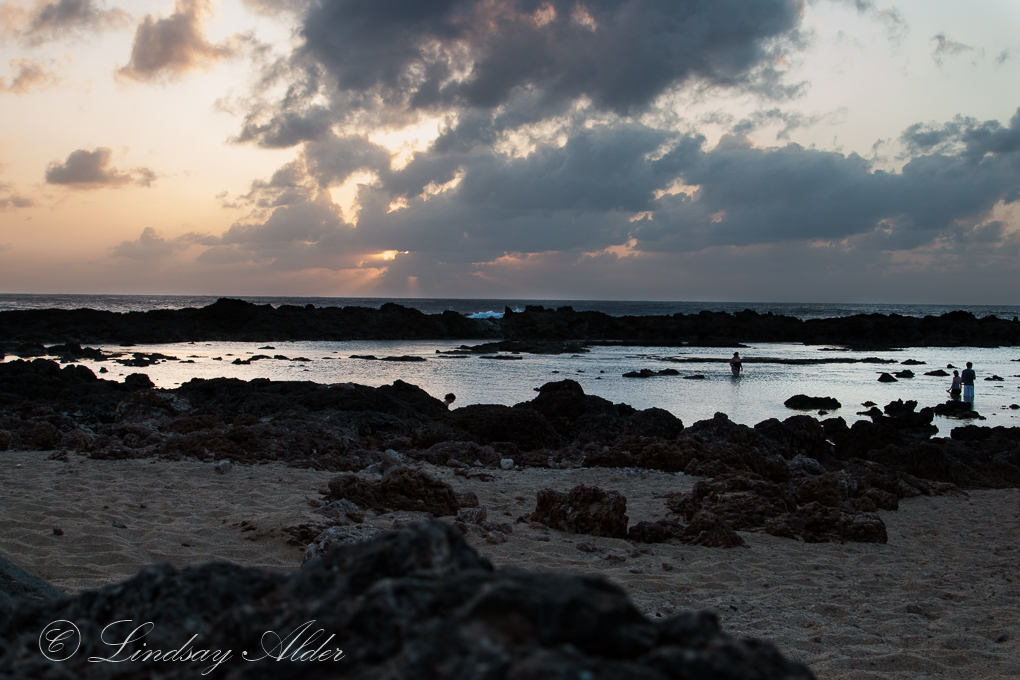 So back to morning.  We crawled and climbed and jumped along those rocks until we reached the far outer rim.  Most of us were wearing tennis shoes (we had planned to go hiking instead, but those plans fell through at the last minute), so we were trying to avoid walking through the water, but after Brian's little brother Dave jumped and slipped into the water anyway, I ended up taking off my tennis shoes and walking through the water the rest of the way (it was safer to already be in the water than to fall in the water with my camera, I figured).  Climbing up onto the far jagged rocks and seeing the power of the water on the other side was incredible. 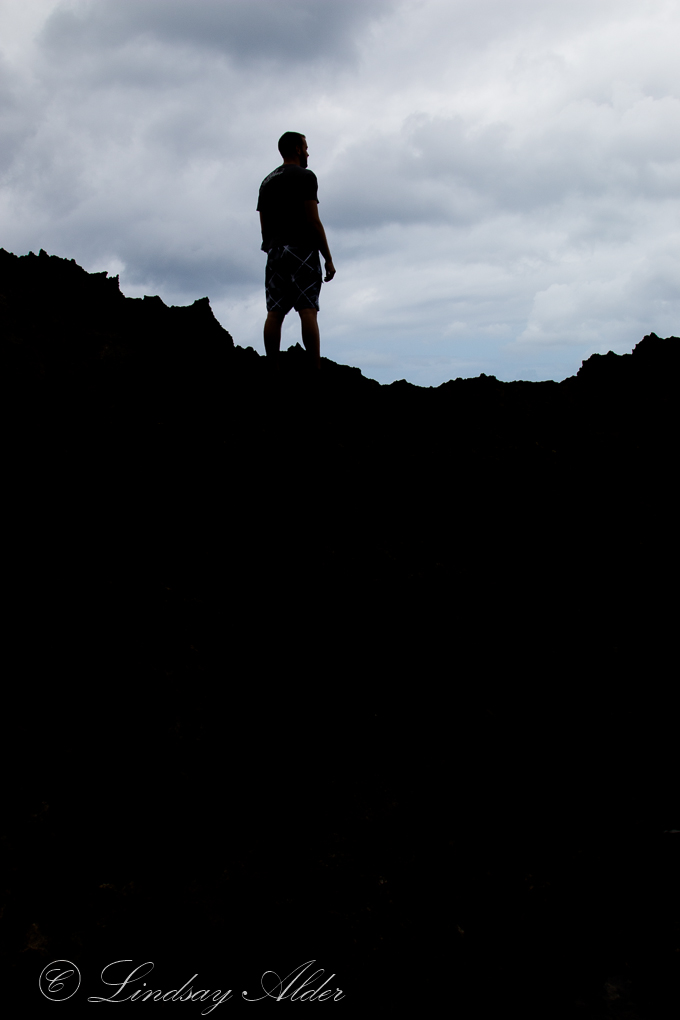 I kept my camera out and snapped shot after shot after shot to try to capture the magnificence of it, but each picture fell embarrassingly flat.  It took my breath away and we all commented on the sure death that would await any of us were we to slip and fall into the currents below. 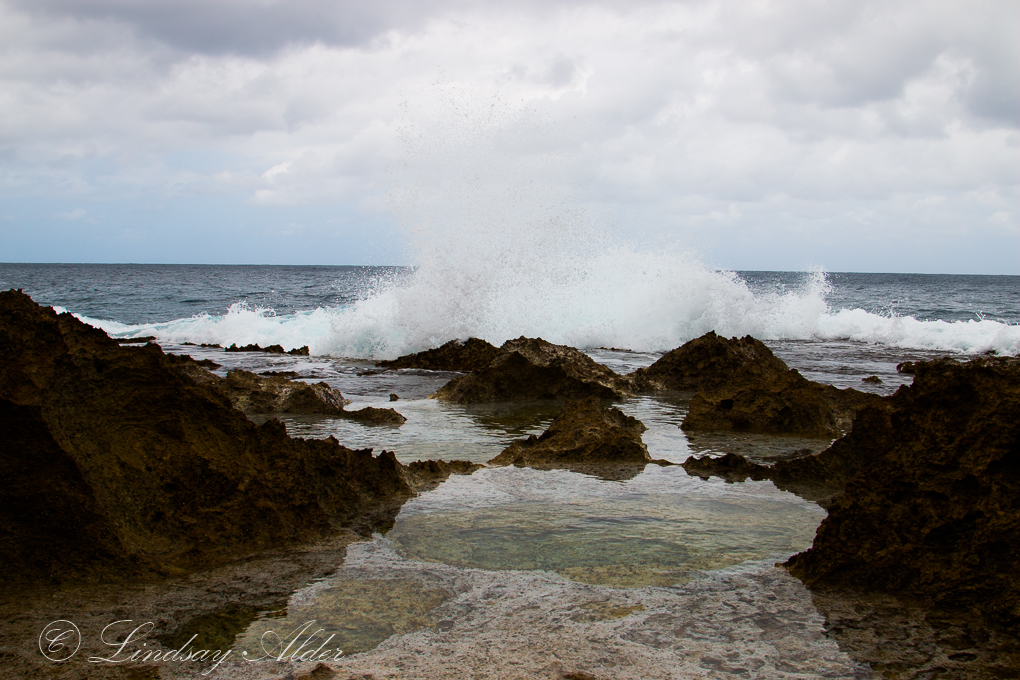 Too soon it was time for us to head back home and meet the rest of the family for our afternoon excursion to Pearl Harbor. 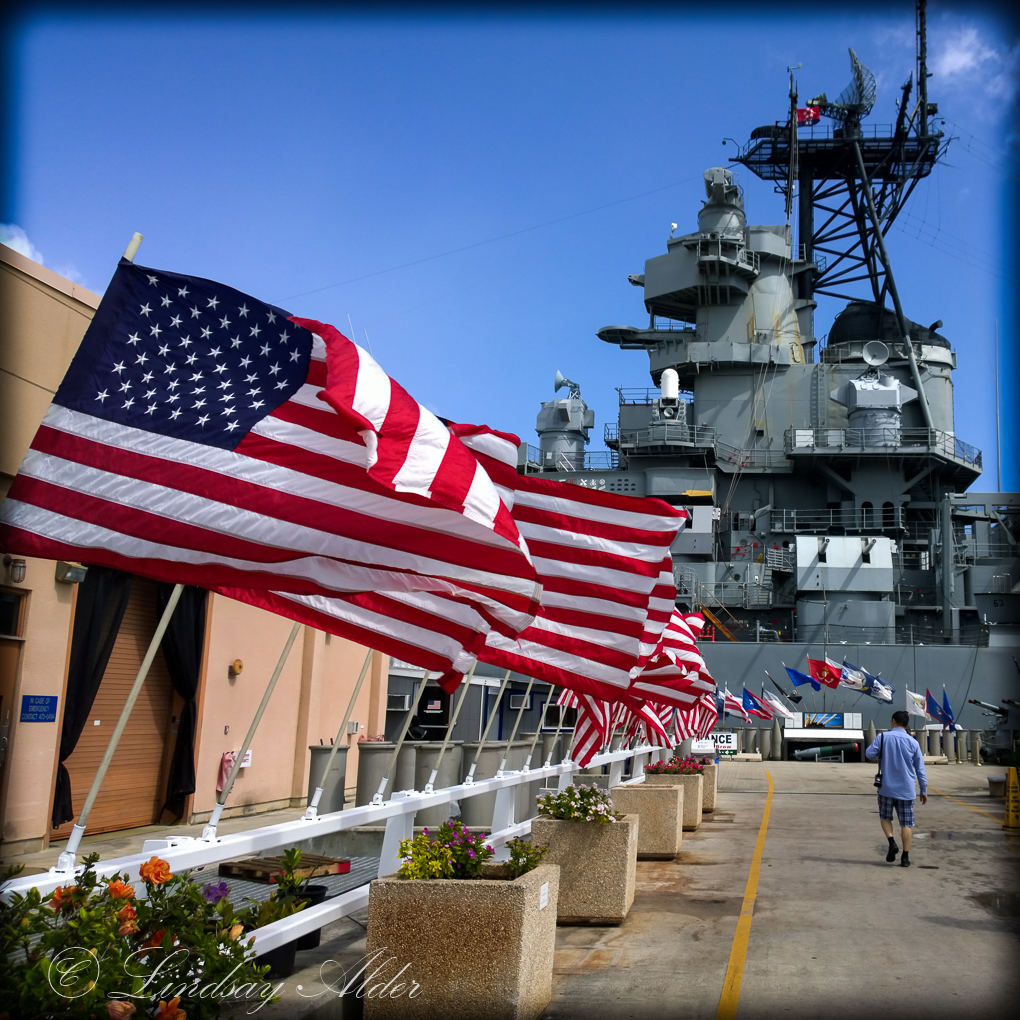 We toured the USS Missouri where the Empire of Japan formally surrendered, thus ending World War II.  Our tour guide was knowledgeable and passionate and full of interesting facts that helped bring that day back in 1945 to life.  Most impressive to me, however, was the sheer power of that battleship. 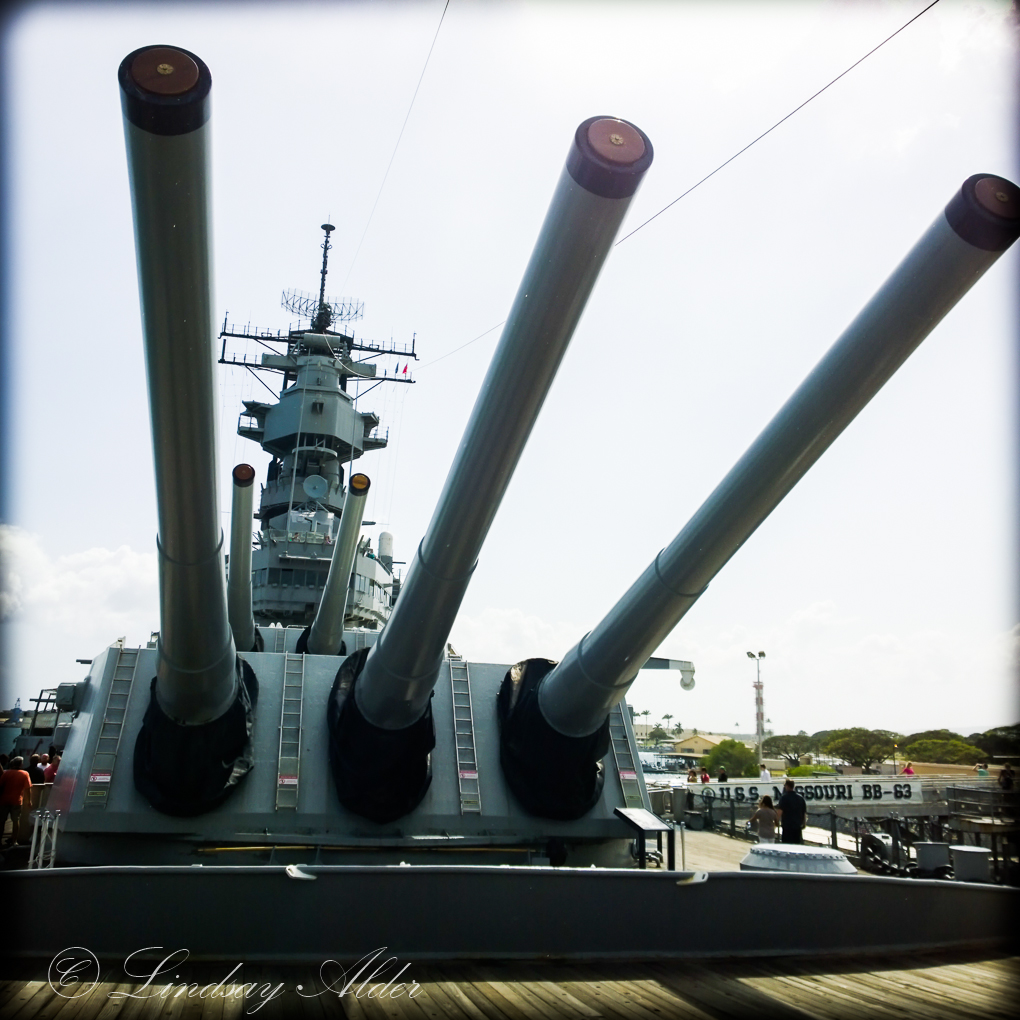 Do you see those guns?!  They can shoot 2700 lbs of shells TWENTY miles!  Maybe that's not so impressive for people who know about war ships... but to me, it's incredible. 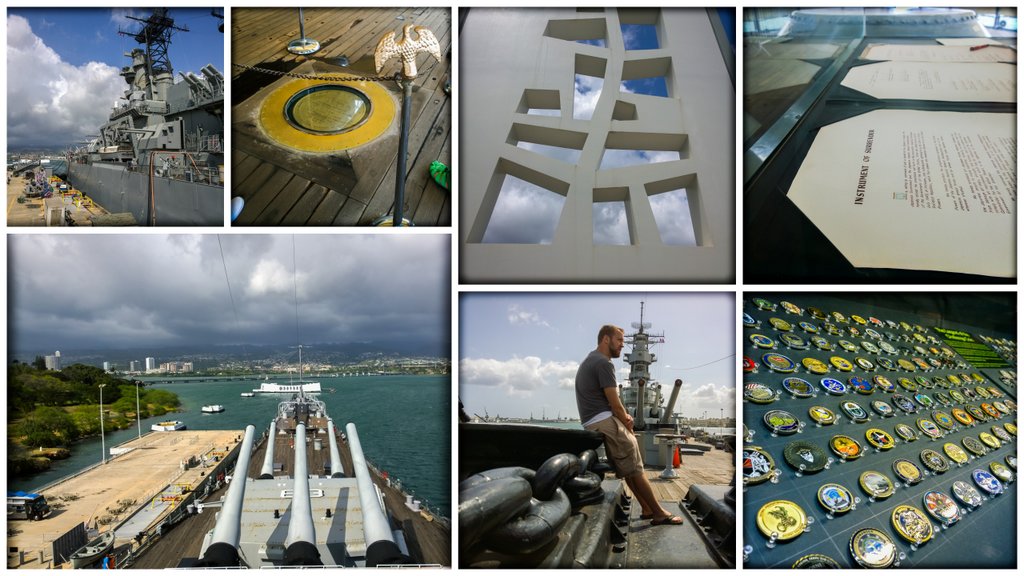 As I mentioned, we stopped back at Shark's Cove to watch the sunset that night and I was sorry to see the thick clouds blocking most of the color.  But even so, there's something tranquilizing about sunsets, don't you think? 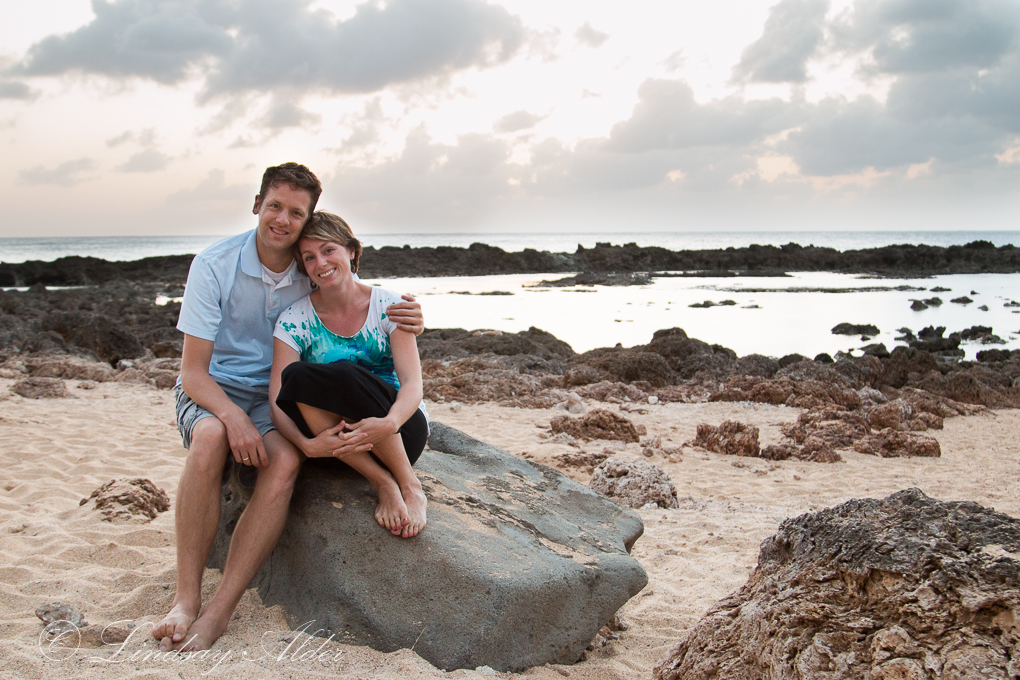 That night we, once again, slept hard.

The following morning we didn't have much time to play as our flight left mid-morning.  So Brian and I spent the rest of our hours there driving the 'long way' to the airport, around the coast and stopped whenever we felt like it.  We spent a half an hour or so looking for the house I lived in all those years ago and I was absolutely delighted to find the bench in our backyard that my wonderful roommate, Becky, and I shared countless half-gallons of ice cream on.  All the talks we had - all the calories we ingested - all the laughter and memories we shared on that bench came back to me and I felt lucky, once again, to have been blessed with such terrific friends all the way through my life. 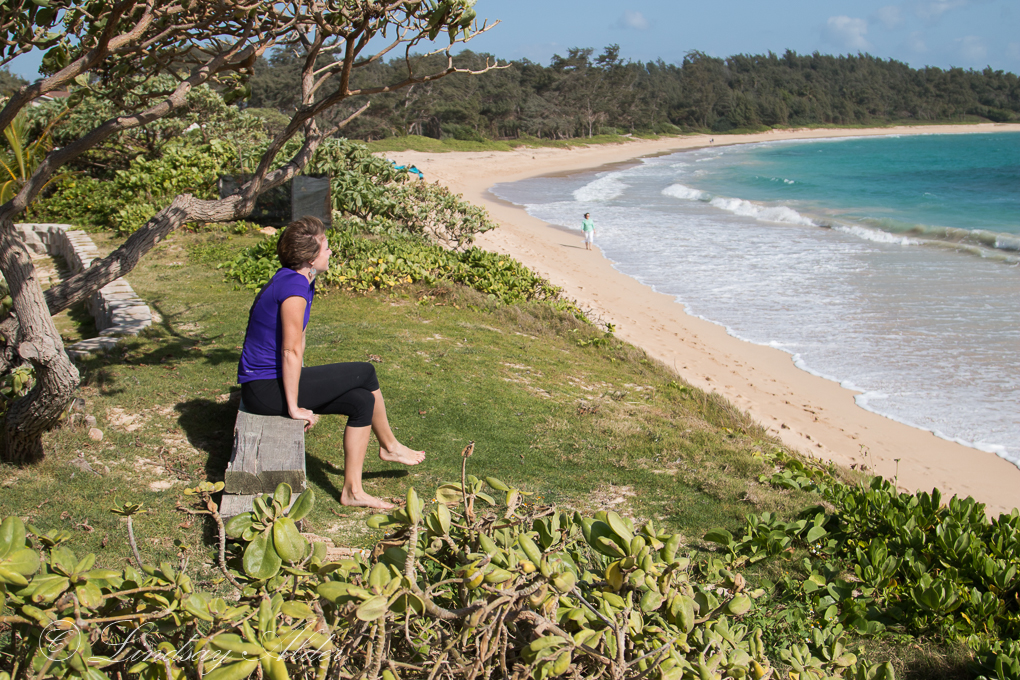 It gave me hope that there will be more friends waiting for me in Vegas, too. 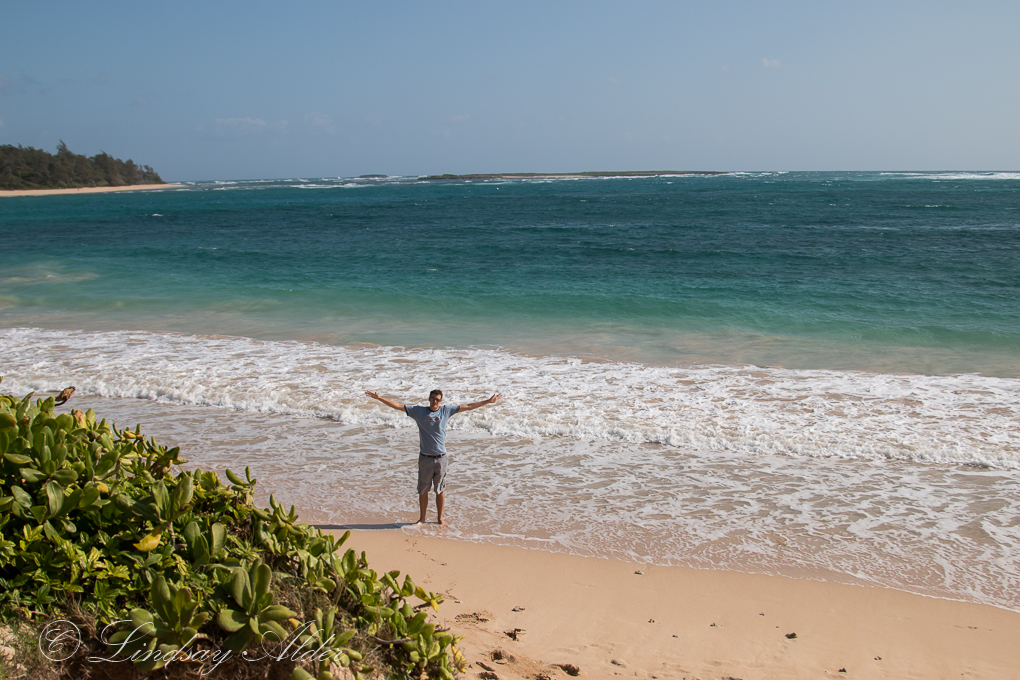 But if not, Brian and I will just have to head to Hawaii every year to make up for it.
posted at 6:30 PM