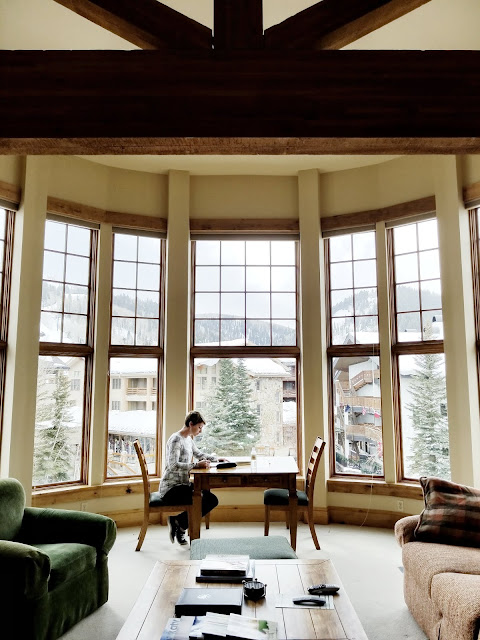 I've learned that not everyone gets it, but I have a real reaction to being surrounded by light and beauty. It fills me, energizes me, helps me. I think I need to move again and make 'giant windows overlooking something beautiful' one of the non-negotiables.

Anyway, once Brian was finished with his meetings for the morning, he'd run up to the suite and we'd throw our ski clothes on and head out to the mountain. 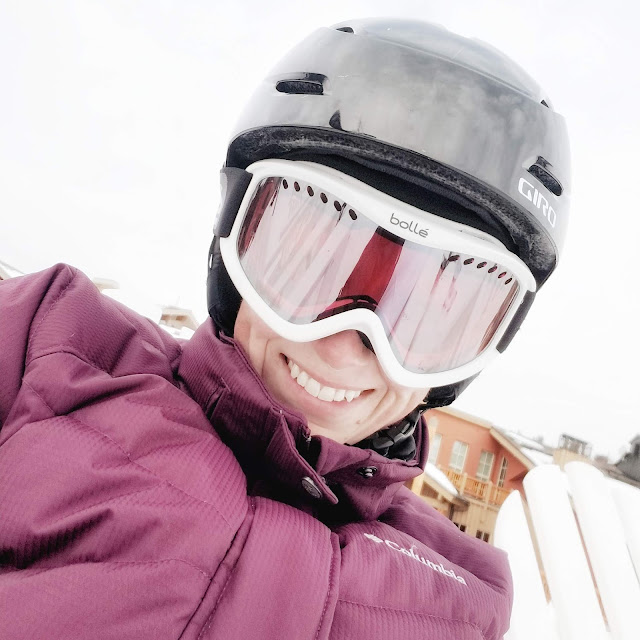 On Thursday morning when we first rented our skis, two different people running the rental shop commented on the fact that we were not renting helmets to go along with our skis.

Which I found odd.

And a little gimmicky.

Because when I was growing up, no one wore a helmet on the slopes. And the paradigm in which I live says that the only time you need a helmet is if you're planning to do crazy stuff.

So when they offered the helmets to us, I politely declined, and when they offered again I said, "No thanks, we're not doing anything too crazy." And so off we went with nothing protecting our brains but our skulls.

Well, it didn't take long to feel that perhaps my paradigm was a bit old fashioned (or perhaps it was just Deer Valley), because everyone on the slopes had a helmet. And when I say everyone, I literally mean that I saw only two other people all day that were behaving as reckless as we. There were helmets in the lines, on the bunny hills, walking into the lodge... everywhere. Now, generally I'm not one to be peer pressured into things, but it got us thinking and made us uncomfortable enough that on day two we went back into the rental shop and rented two helmets to keep for the rest of our time.

I suppose it was the smart thing to do. And, anyway, don't we look stunning? 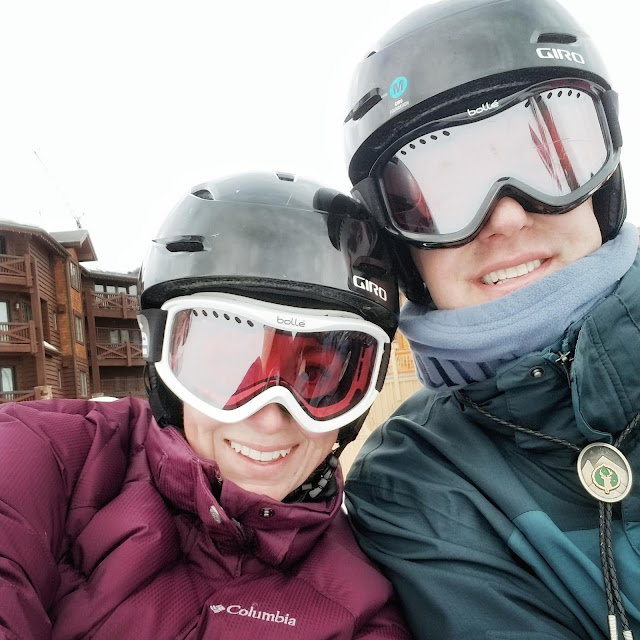 We met up with several friends on the slopes on the second day. Raymond and Allison, Ravi, and Steve and Debbie all joined us and we spent much of the afternoon together, laughing at each other when we fell and encouraging each other to try new things. 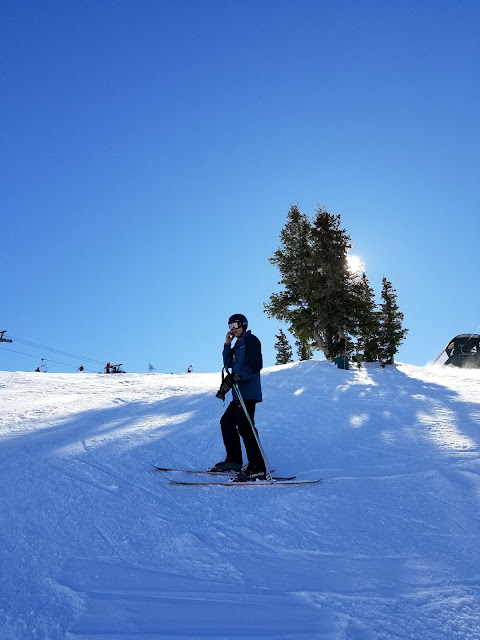 I, on the other hand, was quite tired and ready to go by the end of day two because I'd spent much of the day working on moguls, which showed me that I currently have much to be desired in terms of aerobic fitness.

But regardless of whether we were ready to go or not, the ski lifts closed, and since we were unwilling to walk up the mountains, we went home.

I had time to take a long hot shower and get ready for dinner, and Brian had time to attend more meetings to learn about how to be an better eye surgeon.

After that, we headed out to dinner with our good friends, Allison and Raymond. This was the view as we left our suite and looked down into the lobby. 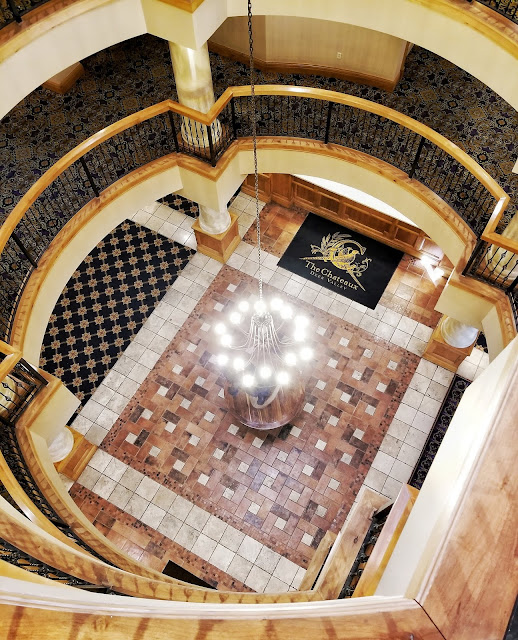 Raymond and Allison had gotten reservations to The Blind Dog - which was a great seafood restaurant in town. They only had room for us at the bar (but it was a table in the bar) and the waitress was visibly frustrated when she learned that we would not be drinking for the night. I always feel a little twinge of guilt when I see the disappointment as the server realizes our bill (and therefore our tips) will not be quite as large as they had hoped, but in this case I think we redeemed our value a little bit by ordering four sodas, five appetizers, four entrees, and two desserts... and, surprisingly, we ate them all. I was quite impressed with ourselves, actually.  It was delicious food, and we stayed there for two and a half hours eating and talking and laughing.

There were only a couple of awkward moments when the drunk and/or mentally disabled man dining alone next to us (right next to us) wouldn't scoot over enough for me to slide into the bench at our table, or when he interrupted the waitress as she was taking our orders to ask for dessert, but it certainly added to the fun of the night.

And before we left the restaurant, I felt like we had to get at least one smudgy selfie. 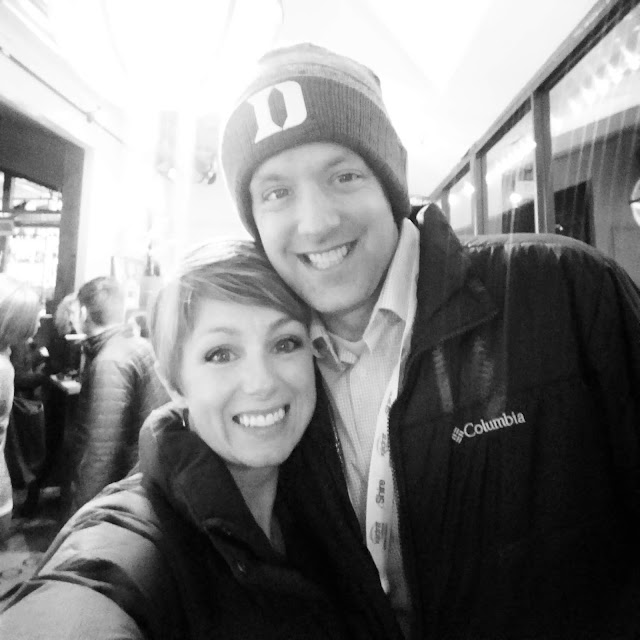