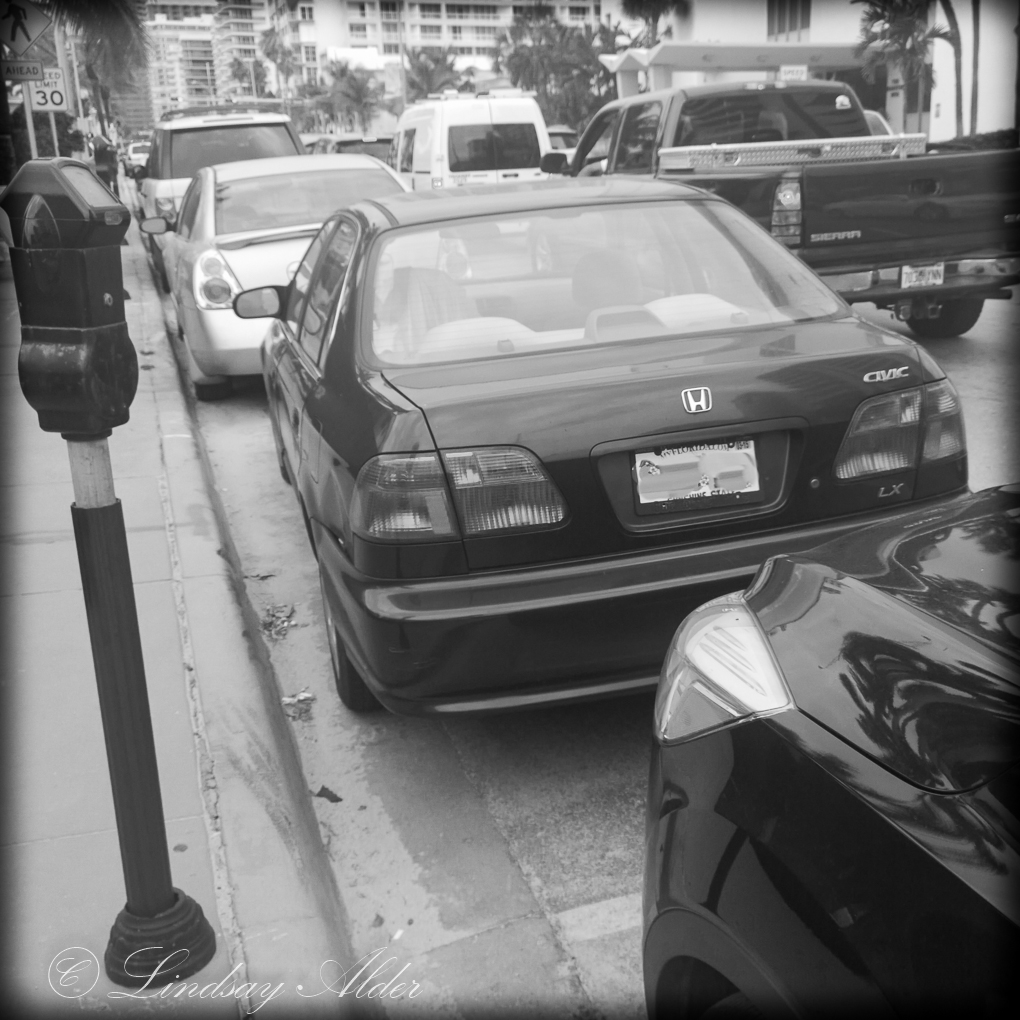 It all started with a sign that read: No Parking in Front of Gate.  This wasn't terrible news, though it did take away two or three of the coveted parking spaces along one of the quiet roads perpendicular to our apartment building.

I say 'quiet' but I'm guessing that my definition of a quiet road is somewhat different than the normal definition, so perhaps I should, instead, say 'quiet-ish'.

By contrast, the road that runs right in front of our apartment complex is awfully busy.  And when I say 'busy', I mean it's the only main road that runs north on this barrier island.  It has three lanes of one-way traffic, no right or left turning lanes, no shoulders, is heavily congested and moving fast.  It's rather a mess, in my opinion.  And so given the choice to parallel park along this crazy road or along one of the perpendicular quiet(ish) roads is an option that I was happy to discover I had.  And the quiet roads will win every time.  Even if I have to walk an extra block because of it.

So, the real trouble came a few weeks after that initial sign when the rest of the 'No Parking' signs showed up.  Soon after that, the trucks came.  And the tractors.  Then the big cranes and the dump trucks and the dirt sifters and the jackhammers.  They blocked off the entire right hand side of that wonderful parking road with big, plastic barriers filled with sand - now it is a highly inconvenient one-way, and parking there is absolutely illegal and impossible. They're building a new building across the street from us.

And another one down the street that, in addition to swallowing up the other quiet(ish) roads, has increased the traffic and craziness of the main road as well... leaving us the only option of parking in madness.

Now, I've gotten pretty good at parallel parking this year and can generally slide the little car into some pretty tight spots.  But parallel parking along a quiet(ish) road doesn't feel like the same thing as parallel parking on a crazy road.  In fact, I think they should call it something else entirely - like 'anxiety parking', or maybe 'death parking'.

Aside from the sheer number of cars on this mad road, lets take a moment for me to give you a better idea about what the drivers, in general, are like around here.

Example #1 - One night I mentioned to a new friend in the ward my observations about how crazy Miami drivers are.  "Oh yeah," he said, tossing his hand into the air like that was last years news.  "I always say that in America, teens are taught how to drive with their hands on the wheel in the 10 and 2 position, but in Miami they're taught how to drive with their hands in the 12 and Honk position."  We all threw our heads back and laughed because, truth.

Example #2 - The day after Christmas, Brian and I went to the mall to trade in some shoes (first mistake, don't go to the mall on the day after Christmas) and had to drive around the parking lot for 20 full minutes before finally finding a place to park.  I passed those 20 minutes counting the number of horn honks I heard. After 20 minutes I had counted 36 honks.  In one parking lot.  That's almost one every 30 seconds.  It's amazing really.

Example #3 - Red lights.  Or, more specifically, red lights that have just turned green.  You have less than one second to get your wheels moving if you don't want to be honked at.  I've seriously been honked at (a handful of times) in the time it took me to lift my foot from the brake and onto the gas pedal, after watching the light turn green.  And, if you're driving a manual transmission, you better not even think about putting your car in neutral if you're in the front of the line, because you'll have three cars honking at you if you take the time to put your car in gear after the light turns green.

Example #4 - Bumper to bumper traffic.  If you let more than 5 feet of road get between you and the stopped car in front of you?  HONK, HOOOONK!  Get a move on because, you know, moving those 5 feet will really help the cars behind you get wherever they're going faster.

Examples #5 - Phantom honkers.  Much of the time I can't even tell who is honking from where.  The seventh car in line is just as likely as the second car to blast his horn if the car in first is taking too long to move through the intersection.  If someone behind you doesn't like that you need to turn left and consequently block their lane of traffic to do so, you will hear about it, and so will everyone around you... but since it's perfectly legal, it's not easy to always find the source.

Example #6 - Need to change lanes?  If it's heavy traffic, you have a 5% chance of having a car actually let you in, and a 70% chance of being honked at as you force your way over.

All this to say: people don't really like it when you inconvenience them around here, and they're certainly not afraid to let you know about it.

So parallel parking in the midst of these people on that road (which includes stopping in the middle of the lane and then r.e.v.e.r.s.i.n.g (!)) is a little ... nerve-wracking.  Thankfully I don't really drive the car all that much because I drive the van, but when I do I always feel a little twinge of hope that there will be a space big enough for me to just drive right into instead of having to *gulp* stop, and *double gulp* reverse.

Well, one day recently ago I had no such luck.  Not only was the only available spot one that I would absolutely have to reverse into, it was one that was going to be a prettytightsqueeze.  I knew I had one shot.  Thankfully, people are actually quite patient for one (quick) try... but if you have to pull out and realign yourself?  Oh boy.  I feel bad for the people who I've watched try to parallel park with the guy behind them pushing on his horn without ceasing.  Like that's going to help.

I put my blinker on and applied my brake three cars before the empty space to give the car behind me enough time to start slowing down or to change lanes if he wanted (which, apparently, was not the right choice because I got honked at right away).  After I was stopped in position I quickly put on my reverse lights in addition to my blinker to alert the fast-moving cars behind me of my intentions.  They got the message and I watched the cars form what reminded me of a blood clot... stopped, clogged, and slowly seeping into the other lane.  It was time for my one shot.  Talk about performance anxiety.

You should have seen me.  I'm pretty sure it looked like one of those movies where the car just snaps into place like a rubber band.  Smooth, fast, I've-done-this-a-million-times like. I felt pret.t.y. awesome.  The spot fit my car like a slightly too big rubber glove... a little wiggle room, but nice and comfy.  18 inches to spare at the rear, 18 inches to spare at the head.

And no more honking.

Really, it was a thing of beauty... and then the next time I ran the car up onto the sidewalk and scared two pedestrians nearly to death.  But we won't talk about that one...
posted at 10:25 AM